Next Lesson - Benign Conditions of the Breast

Breast cancer is the most common cancer in the UK, accounting for more than 15% of all newly diagnosed cancers in the UK and for more than 20% of female malignancies. Approximately one in every seven women will develop breast cancer in their lifetime. Over 95% of malignant neoplasms in the breast are adenocarcinomas[1], due to the highly glandular structure of the breast.

The largest risk factors of breast cancer are female sex and older age.

Risk is also associated with increased exposure to oestrogen. The cells of the breast glandular tissue have hormone receptors on their cell surface that allow them to respond accordingly to different levels of hormones, specifically oestrogen, progesterone and prolactin. When oestrogen is higher, the glandular tissue proliferates to produce and secrete more milk. With increased division and proliferation of these cells, there is a higher chance of an error occurring and uncontrolled cell growth as a result.

Exogenous oestrogens (those which have their origin outside the body) from hormone replacement therapies are known to slightly increase the risk.

Other strong risk factors for malignant breast disease are if the patient has had previous breast cancer, atypical changes on a previous biopsy, any previous cancers, any exposure to radiation and a family history of breast cancer.

Autosomal dominant mutations in tumour suppressor genes, BRCA1 (breast cancer associated gene 1) & BRCA2, are the known cause of 25% of hereditary breast cancer cases but only 2% of all breast cancers. Carriers of these mutations will present with symptoms earlier in life and have a very high likelihood of developing breast cancer in their lifetime, so much so that some carriers choose to undergo prophylactic double mastectomies (removal of both breasts to prevent them from developing any cancer).

Male breast cancer is far rarer, comprising of only 1% of all breast cancer diagnoses. Specific risks include Klinefelter syndrome, where the male has an additional X chromosome thus a genotype of 47, XXY. Again, just as in females, the risk is related to oestrogen exposure and increased with BRCA gene mutations.

Obesity increases the risk of breast cancer as endogenous androgens are converted into oestrogen in any peripherally stored fat by the enzyme aromatase. The more fat present, the higher the conversion, production and exposure to oestrogens.

Breast feeding is known to be protective against breast cancer as lactation suppresses ovulation and so exposure of oestrogen to the luminal cells of the breast is reduced.

If a GP suspects that a breast mass may be cancerous, the patient is referred on to a two-week wait pathway to a clinic run by breast surgeons. The mass is then investigated using the triple assessment technique, a universal three-part process involving clinical history and examination, radiographic imaging and histological examination. 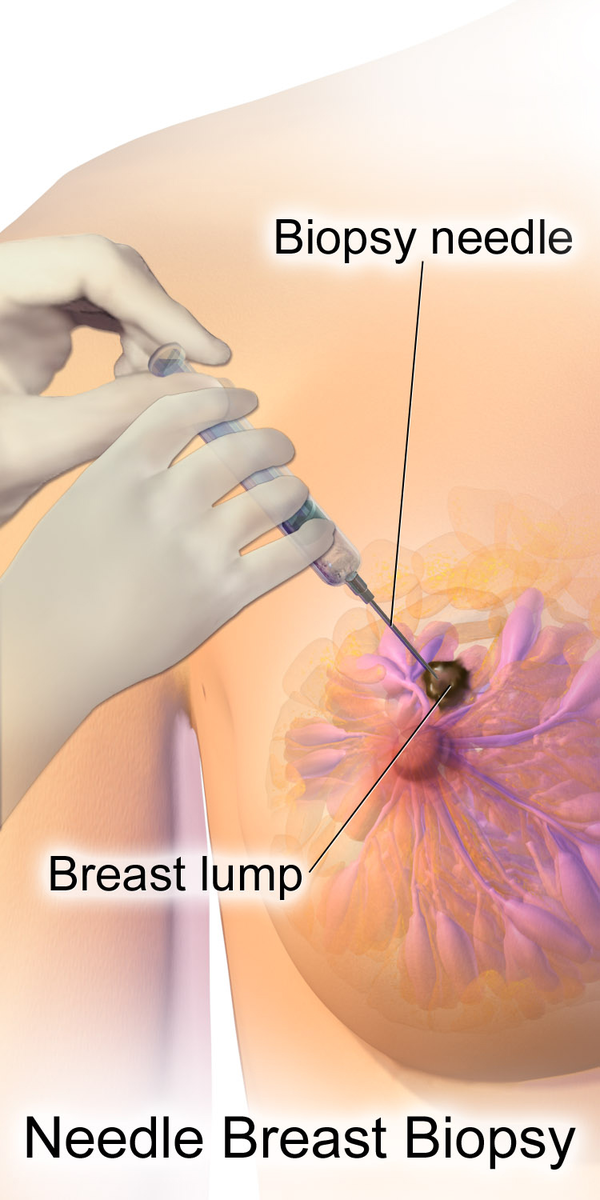 Diagram - A biopsy of a breast mass for histological analysis

Around 95% of breast carcinomas are adenocarcinomas, which are then classified in two different ways, by the structure of origin and the metastatic potential (in situ or invasive). An In-situ carcinoma describes when the neoplasm is restrained by the basement membrane so is contained within the lobules or ducts, and has not invaded into other tissues. Invasive carcinomas are those which have broken through into other tissues and are able to metastasise as a result.

Ductal Carcinoma In Situ is a malignancy originating from the myoepithelial cells in the wall of the lactiferous ducts. DCIS is usually asymptomatic and is detected incidentally through the NHS breast screening programme. DCIS has the potential to progress to invasive cancer, and therefore is usually surgically removed either as a lumpectomy (wide local excision) or mastectomy.

Lobular Carcinoma In Situ is less common. It originates from the secretory lobules of the breast which but has not invaded into surrounding tissue. It is often diagnosed as an incidental finding during biopsy as is mostly asymptomatic. LCIS has a much smaller risk of developing into invasive disease and so observation alone is often possible rather than surgical resection.

Paget’s disease of the nipple is an unusual presentation which is nearly always associated with an underlying neoplasm. Paget’s is characterised by the development of a red, scaly rash of the nipple and areola. There may be an itchy or burning sensation associated with pain and possible abnormal discharge from the nipple. The nipple may also become inverted.

Paget’s disease of the breast is caused by an extension of the neoplasm along the duct to the nipple epidermis without crossing the basement membrane below. It is easily mistaken for dermatitis or eczema, and so this presentation should be treated with high suspicion and referred to a specialist. Treatment depends on the underlying neoplasm, but both the nipple and areolar will require surgical excision. 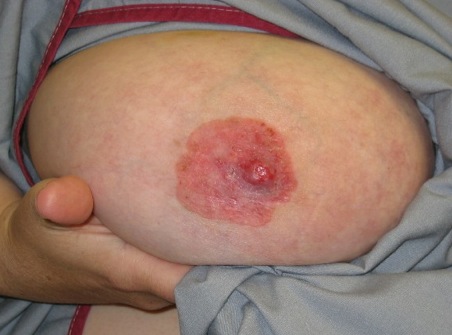 Carcinomas become invasive when they have broken through the basement membrane into the stroma and surrounding structures of the breast. As a result, these tumours can potentially metastasise through either lymphatic drainage or blood vessels. The primary point of metastasis is often to the lymph nodes in the ipsilateral axilla. The first lymph node that a given area of the breast drains to is known as the sentinel lymph node and so, if any, is the most likely lymph node to contain metastases. Distant metastasis sites which include the lungs, liver, brain or most commonly bone are accessed via the blood vessels.

Invasive carcinoma of the breast is classified by the structure of origin, with invasive ductal carcinoma (also known as No Special Type - NST) by far being the most common generating around 70% of invasive breast malignancy diagnoses. The structure of the invasive ductal carcinoma depends on how differentiated the tumour is, a well differentiated neoplasm consists of tubules lined by atypical cells, whereas a poorly differentiated neoplasm consists of sheets of pleomorphic cells (lots of variability in size, shape and type). This often develops from DCIS tumours that have not been caught or treated.

Invasive lobular carcinoma originates from the secretary lobules of the breast and is the second most common breast cancer. It generates around 15% of invasive breast malignancy diagnoses.

As well as mutations in tumour suppression genes BRCA 1 and 2 as mentioned previously, some breast cancers can have mutations in the Human Epidermal Growth Factor Receptor 2 gene which is involved in producing the HER2 Receptor. The normal action of this receptor is to stimulate cell growth. Mutations in this gene can cause an overexpression in these surface proteins and contribute to the uncontrolled proliferation of cells. HER2 positive cells are those that have an increased amount of this receptor protein on their surface compared to normal HER2 negative cells. Oestrogen receptors are also key in breast cancers for their role in cell proliferation as described above.

Like the glandular cells they develop from, the breast cancer cells can have hormone receptors on the surface. As a result, the tumour can be classified not just by location and invasiveness but also by the different receptors that are present on its’ surface. Knowing the expression of certain receptors allows for treatment to be tailored to that specific tumour. There are three major types:

Around 20% of breast cancers are HER2 positive, they are more aggressive and have a higher recurrence rate than HER2 negative, but drugs such as Herceptin can be used to specifically target these cells. ER positive breast cancers can be targeted using drugs such as Tamoxifen.

Lymphatic vessels can become blocked through either compression from a tumour or a neoplasm invading the vessel walls. This can cause issues with the drainage of fluid from the breast and so leads to swelling, presenting as the clinical sign of peau d’orange discussed in the previous article.

The local inflammation that is responding to the tumour can lead to fibrosis of the suspensory ligaments and the lactiferous ducts, reducing the milk secretory function of the breast.

Tumours can metastasise to various points around the body causing different effects depending on that location.

The mainstay of primary breast cancer treatment is surgery to remove the tumour, and then additional adjuvant treatments such as chemotherapy, radiotherapy and hormonal therapy to increase the overall effectiveness of the treatment. The level of treatment depends on the type, stage and grade of the cancer.

Breast surgery involves removing the tumour. This can be done as a lumpectomy; removal of the tumour using a wide excision of the surrounding breast tissue to prevent any cancer from remaining in the breast. This technique tends to be done on smaller tumours. For larger tumours, a mastectomy (removal of the entire breast) may be required. These are sometimes done prophylactically on women who carry mutations in BRCA1 and BRCA2 genes to reduce the chance of breast cancer.

Sentinel node biopsies are often done during breast surgery. This involves injecting a blue radioactive dye into the tumour or surrounding tissue and then tracking which lymph nodes the dye drains to first. The lymph nodes can be detected using a Geiger counter and biopsied for histological assessment. If they contain metastasis then lymph node clearance has to be undertaken. This involves dissecting the axilla and removing all the lymph nodes without damaging any of the important structures. Complications include the development of lymphedema and seroma formation due to the reduced drainage of the area, and rarely neurological damage if any of the brachial plexus becomes injured during the surgery.

Medical treatment is often used to reduce the risk of recurrence of breast cancer post-surgery or as the mainstay of treatment for those unfit for surgery. Alongside chemotherapy and radiotherapy, hormonal therapies and immunotherapies are very commonly used in breast cancer management.

We use Cancer Research UK’s statistics throughout this article https://www.cancerresearchuk.org/health-professional/cancer-statistics/statistics-by-cancer-type/breast-cancer#heading-Zero

Any specific references can be sourced below.