For a summary of metabolism so far, go to Nutrition, Diet and Body Weight – this will explain about types of work, energy requirements for the body, and the diﬀerences between anabolism and catabolism. The main currency of energy within the body is ATP (Adenosine Triphosphate), which stores energy in the form of chemical bond energy – specifically in its phosphate bond. The body aims to create ATP from the many different types of fuel, via a series of reactions, each requiring special conditions and molecules. 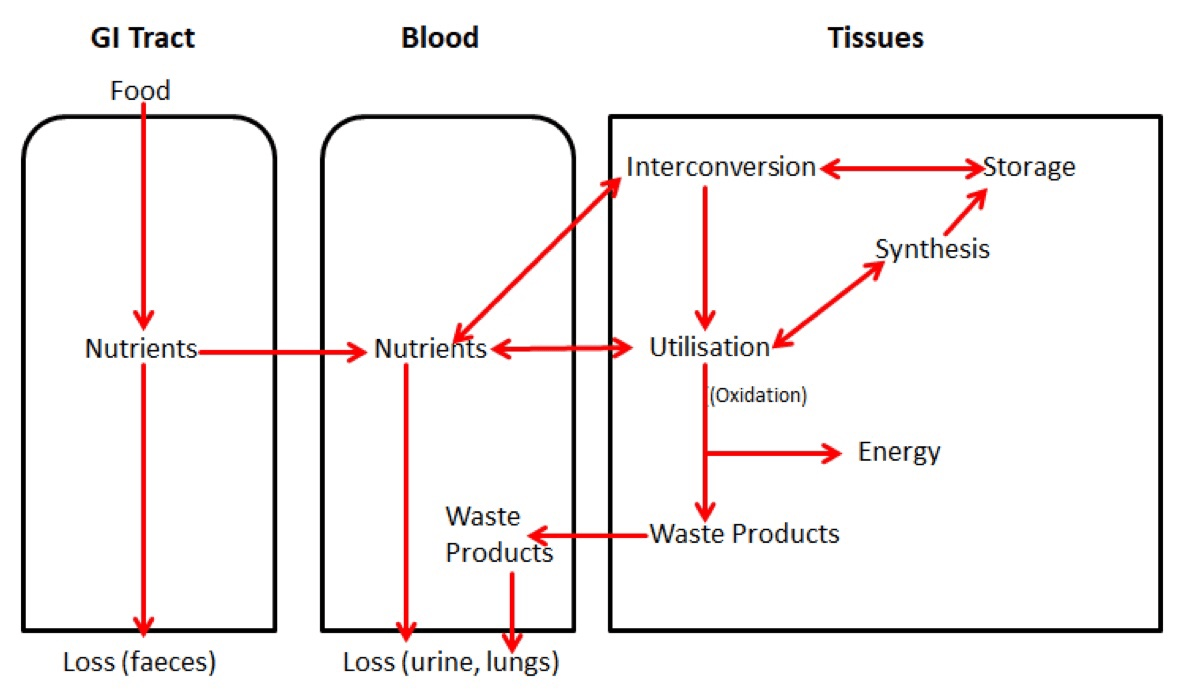 Diagram - Basic overview of the pathway of metabolites within the body and the reactions they can undergo. This diagram is an important summary of metabolism. If you can understand this, you are closer to understanding how energy reactions occur within cells, and who things are transferred between cells

Some metabolic pathways occur in all cells, others are restricted to some cell types. Furthermore, some reactions can only occur in certain compartments within a cell.

To help us understand how these pathways fit together, metabolic maps showing reactants, intermediates and products can be produced.

Energy exists in many forms which can be converted from one form to the other: examples include heat, light, mechanical, electrical, osmotic and chemical (bond). Mainly, humans use chemical bond energy, because they are endothermal (meaning they can’t use heat energy to survive).

This means that all activities within the cell are expressions of chemical bond energy, and an energy change accompanies each chemical reaction:

This can also be explained using ΔG (delta G) – the change in Gibb’s free energy. This relates to whether the reaction may occur spontaneously (without any further energy input needed) or not.

In an exergonic reaction, the ΔG is negative (less than 0) because energy has been released and has left the closed system (a negative charge). This means that the reaction will have occurred spontaneously and is irreversible because the energy produced has been dissipated into the atmosphere.

In an endergonic reaction, the ΔG is positive (more than 0) because energy has to be taken in and added to the system to complete the reaction (a positive change). This means that the reaction will not have occurred spontaneously (because it needs to add in energy).

Diagram - Here we can see the relationship between ΔG and energy levels in reactants and products. You can see how both reactions need an initial input of energy to begin the reaction (called the activation energy - the area above the dotted line), meaning that all the energy changes are NET changes. Enzymes target this activation energy and offer alternative biochemical pathways to lower the activation energy needed for a reaction

ΔG°’ = the energy change in standard conditions, and with pH 7.

ΔG = the energy change in non-standard conditions (like inside a cell). It can be calculated with the following equation:

ΔG indicates whether the reaction will occur spontaneously.

Chemical bond energy is released from fuel molecules by oxidation reactions, which is the removal of electrons. All oxidation reactions are accompanied by a reduction reaction somewhere, making them REDOX (reduction-oxidation) reactions. Often when electrons move, protons (in the form of a H+ ion) move with them. A key energy-production related example is when NAD+ gains one electron and one proton in glycolysis to form NADH, which makes it an electron carrier.

An easy, but vital mnemonic for remembering this is:

Oxidation Is Loss (of electrons) OIL

Reduction Is Gain (of electrons) RIG

When fuel is oxidised the electrons and protons are transferred to carrier molecules like NAD and FAD.

Table - The major electron carrier molecules within the cell, involved in the production of energy, but also in other key functions (such as management of highly damaging free radicals and lipid biosynthesis)

The total concentration of these carriers is constant, so they must cycle between oxidised and reduced states. These molecules act as carriers of “reducing power” – the power of a molecule to reduce another molecule through donating its electrons to the other molecule, becoming oxidised itself. They are used in ATP synthesis and biosynthesis.

In short, chemical bonds in food (e.g. carbohydrates) is used to build up reducing power/ produce electron carrying molecules (NADH, NADPH, FADH). These molecules and their reducing power is then used to produce ATP which is the basic unit of energy for all the body’s chemical reactions that need energy (energy currency). 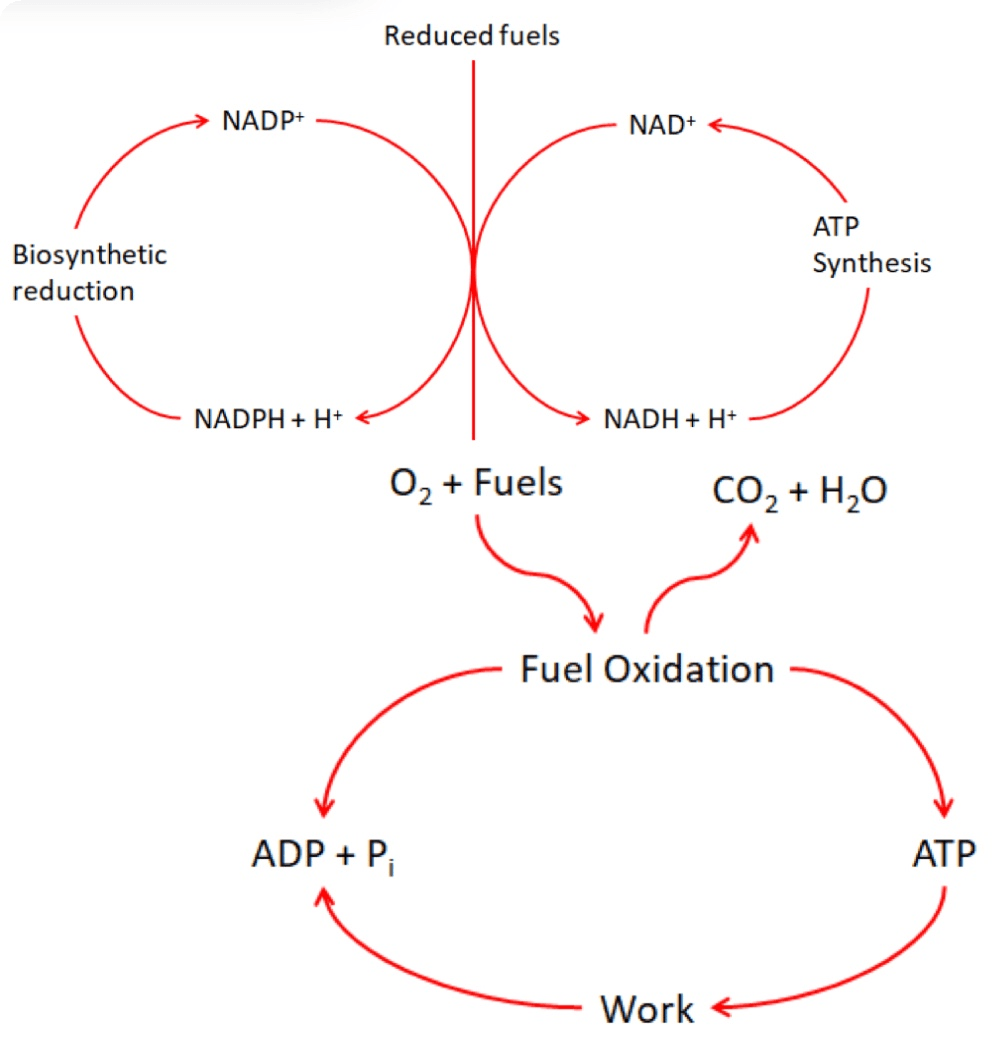 Diagram - The conversion of fuels to energy in the form of ATP. NAD+ and FAD are used at the main electron carriers

When [ATP] is high, anabolic storage pathways are activated to store the energy for the long term. Other high energy signals include NADH and NADPH.

When [ATP] is low and [AMP] and [ADP] is high, catabolic pathways are activated to make more ATP. Other low energy signals include NAD+ and FAD.

When there is an excess supply of reactants for energy producing reactions (e.g. when there is a lot of glucose) energy is stored in macromolecules like glycogen and fat. Skeletal muscle however needs a much more accessible store which it can use immediately if required. Creatine phosphate is therefore the storage of choice.

When [ATP] is high in skeletal muscle, creatine phosphate is formed. If [ATP] falls suddenly, the reaction reverses to produce an immediate source of ATP.

Creatine kinase (the enzyme used in this reaction) is made up of two subunits. One particular combination of subunits is specific to cardiac muscle so are diagnostically useful. When cardiac myocytes are damaged by ischaemia e.g. in a heart attack, creatinine specific to heart muscle will be released into the blood, and can therefore be used to diagnose an MI. However, Troponin I and T are now used as markers of damage to detect myocardial infarction they are more specific to cardiac myocyte damage than creatine kinase.

Creatinine can be produced from the breakdown of creatine or creatine phosphate. It is produced at a constant rate that is proportional to creatine phosphate usage by the muscles and is excreted via urine. This means that it can be used as a marker of both muscle mass, but also kidney function (because creatinine is almost entirely filtered out of the body and so the rate of clearance from the body of this molecule is proportional to the Glomerular Filtration Rate (GFR) of the kidney).