The needs of different systems varies throughout the body. This means some require special circulations to match the specific requirements of that organ.

The pulmonary circulation is required for gas exchange between the alveolar air and the blood. The metabolic requirement of the lungs is supplied by the bronchial circulation which is part of the systemic circulation.

The pulmonary circulation has a high capillary density (high number of capillaries very close together). This means the surface of the alveoli in the lungs are covered in capillaries, providing a large surface area over which gas exchange can take place.

Ventilation-Perfusion Ratio (V:Q Ratio) is the ratio between the volume of air coming in and out of the lungs and the volume of blood flowing past the lungs in the pulmonary circulation. For efficient oxygenation, the ventilation must match the perfusion of the alveoli. The optimal ratio is ~0.8, e.g. 4L/min:5L/min (air flow : blood flow).

The V:Q ratio is important as if it falls too low then the blood will not be inadequately oxygenated leading to the patient becoming hypoxic as there is not enough oxygen in the systemic circulation. 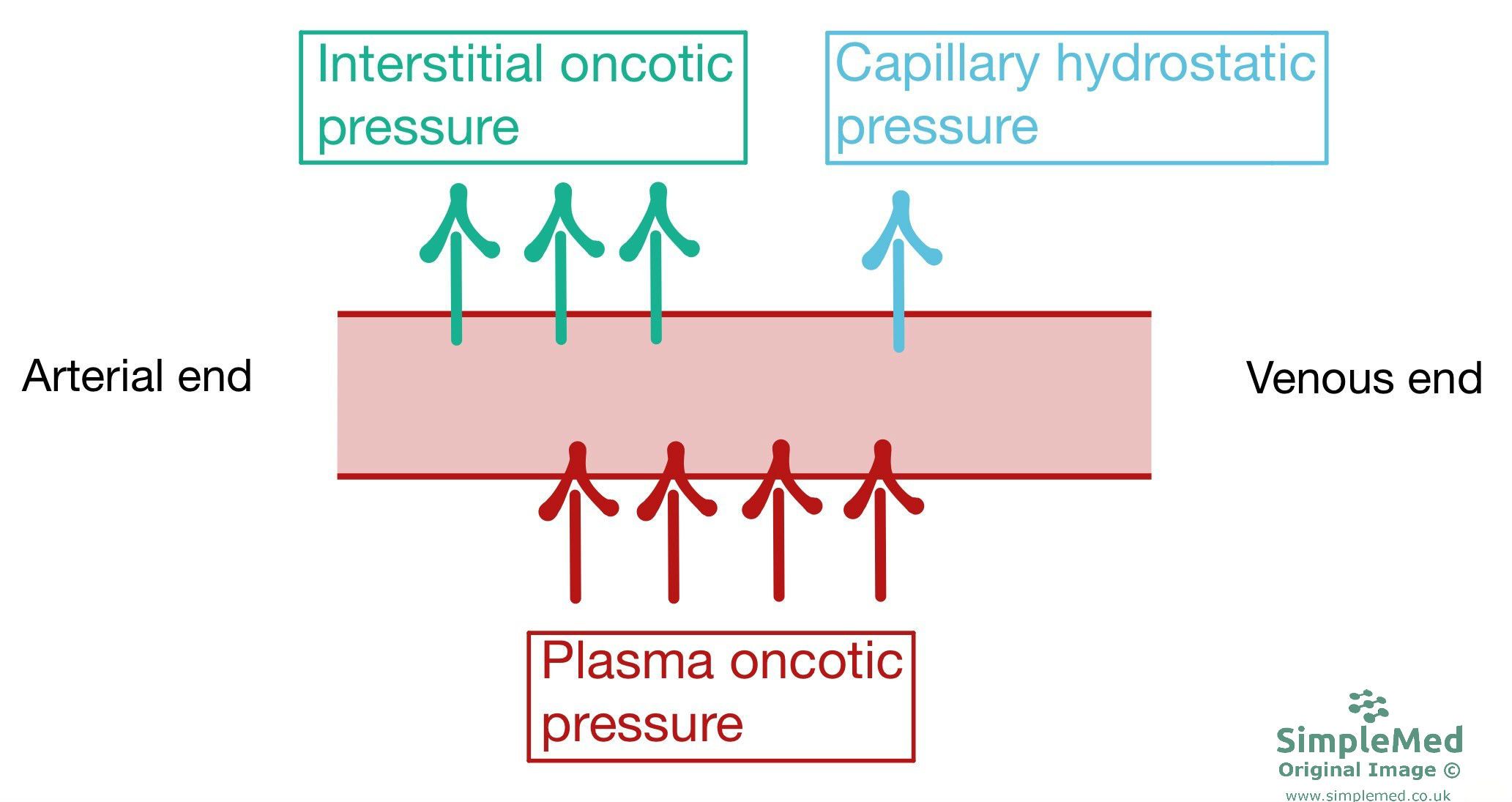 Diagram - The pressures involved in the formation of tissue fluid

The brain has a high metabolic requirement, so it has a high oxygen demand. Neurones are also very sensitive to hypoxia, with a patient losing consciousness after a few seconds of reduced blood flow. As a consequence, the brain requires a constant blood flow and has the following features:

The circulation to the brain has adaptations to maintain a secure blood supply:

Cushing’s Reflex – as the skull is a rigid structure, it will not allow for volume expansion of the brain. Any expansion, e.g. due to a tumour or haemorrhage, will result in an increased intracranial pressure which impairs the cerebral blood flow by compressing the blood vessels.

The coronary circulation must deliver oxygen at a high basal rate and must be able to meet any increased demand.

The skeletal muscle circulation must have capacity to increase oxygen and nutrient delivery and metabolite removal during exercise.

Apical/acral skin has arteriovenous anastomoses (AVAs) which open to increase the blood flow to veins where heat can then be lost. AVAs are under neural control and are not regulated by local metabolites.

In non-apical skin, sweat glands release bradykinin which acts as a local vasodilator to dilate veins and arterioles to increase heat loss from the body.