Next Lesson - Chemical Control of Breathing and Plasma pH

It seems almost wrong that arterial blood has a high concentration of carbon dioxide in, and this is seen as a waste product that would only be present in venous blood. However, carbon dioxide has an important role in controlling the pH of the blood, which is necessary to prevent the denaturation of proteins in the blood.

The pH of the Plasma

The overall pH of the plasma of the blood depends upon the concentration of dissolved carbon dioxide. A large amount of dissolved carbon dioxide will push the reaction to the right hand-side (meaning more H+ and HCO3- ions are produced), and a high concentration of H+ and HCO3- ions will push the reaction to the left hand-side (increasing the amount of CO2 produced).

Blood plasma contains around 25 mmol/L of hydrogen carbonate ions, but this high amount cannot be produced by carbon dioxide dissociation alone. By having a high concentration of hydrogen carbonate ions in the plasma, the majority of the dissolved carbon dioxide is prevented from reacting with the water molecules in the plasma because the reaction wants to be pushed to the left so cannot dissolve any more CO2. This results in the pH of the plasma being alkaline, and is shown in the diagram below, with the high concentration of HCO3- ions shown as the large blue arrow.

It is possible to calculate the pH of the plasma by using the Henderson-Hasselbalch equation. The equation uses the values of pCO2 and concentration of HCO3- ions.

The value for pK is the relative acid strength scale and is constant at 6.1 at 37oC. This means that for every pH in a human being at 37 degrees (most humans) the pK is 6.1.

The multiplication of pCO2 by 0.23 is needed because works out the amount of carbon dioxide that is actually dissolved in the blood (and not bound to another molecule).

While an understanding of this equation is important for skills like interpretation of an arterial blood gas, in clinical practice the pH is pre-recorded on the blood results.

Within the erythrocytes, carbon dioxide reacts with water molecules within the cytoplasm of the cell to form hydrogen ions and hydrogen carbonate ions as shown above. This reaction is sped up by the action of the enzyme carbonic anhydrase.

The H+ ions then bind to the negatively-charged groups present on the haemoglobin chains, and the HCO3- ions are transported out of the cell via the chloride-bicarbonate exchanger. This means that the forward reaction is allowed to take place, because all of the H+ and HCO3- ions are removed from the cytoplasm of the cell. 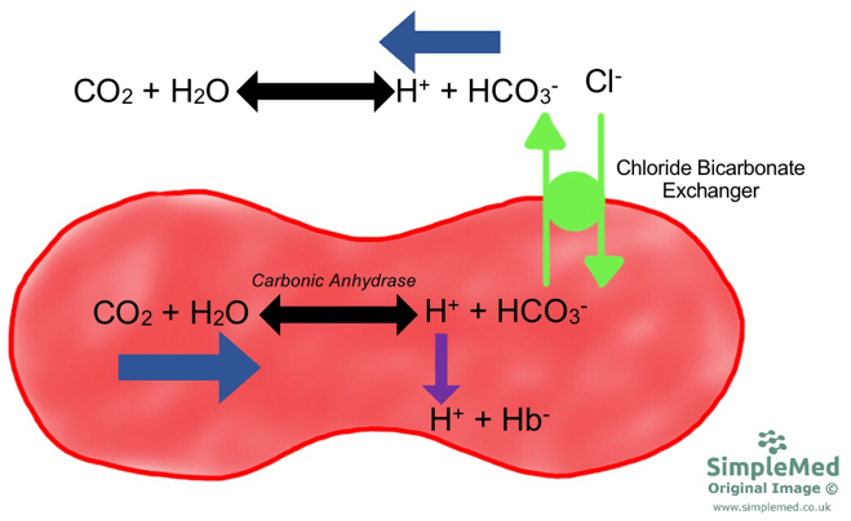 Diagram - The production of hydrogen carbonate ions in erythrocytes

Overall, pH of the plasma depends on the pCO2 and the concentration of HCO3- ions.

Hydrogen bicarbonate ions are able to react with acids that the body produces; lactic acid from anaerobic respiration and ketones from breakdown of fatty acids. Carbon dioxide is the product of the reaction and can be removed from the body via ventilation. This results in the pH of the plasma minimally changing and HCO3- ions acting as a buffer during periods when excess acids are produced.

The pCO2 is higher in the venous blood due to the tissues producing carbon dioxide during aerobic respiration. This carbon dioxide is either dissolved into the blood or bound to haemoglobin.

At the actively respiring tissues, there is a lower partial pressure of oxygen because the tissues are using it up, so the haemoglobin is in T state (meaning it is more likely to release its oxygen molecules). In this state, more H+ ions are able to bind to the haemoglobin molecule and more hydrogen carbonate ions are produced. This allows the forwards reaction to continue, because the H+ ion concentration is low, allowing more CO2 to be dissolved. 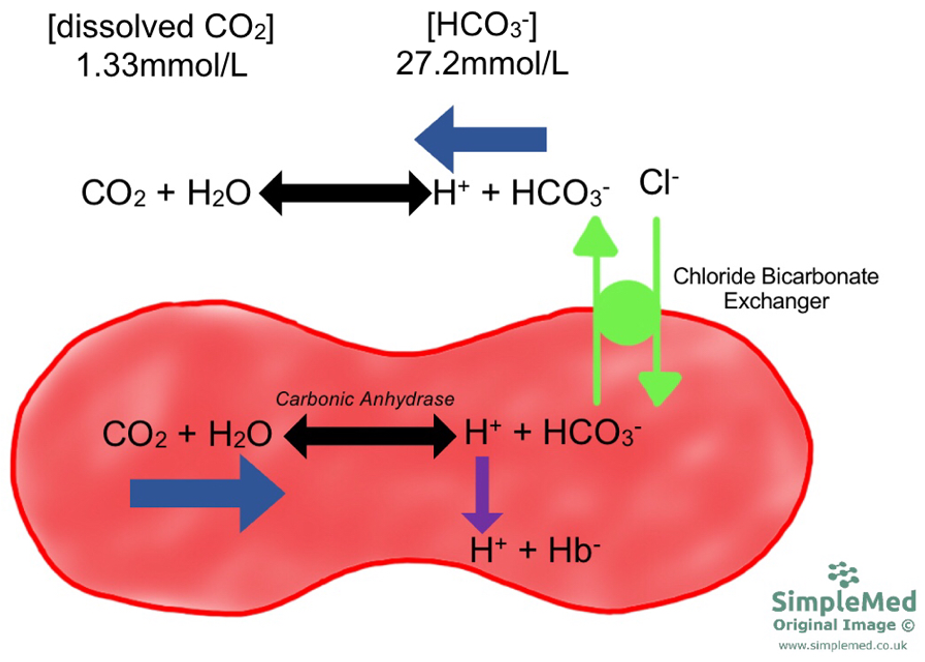 Despite there being a higher concentration of hydrogen carbonate ions in the venous blood, the pH does not change dramatically as the pCO2 also increases (thinking back to Henderson-Hasselbalch equation).

At the lungs, the partial pressure of oxygen increases, meaning more oxygen molecules bind to haemoglobin. This causes the haemoglobin molecule to transform into its R state. This releases the bound H+ ions, which react with the HCO3- in the venous blood. This produces carbon dioxide, which is breathed out. 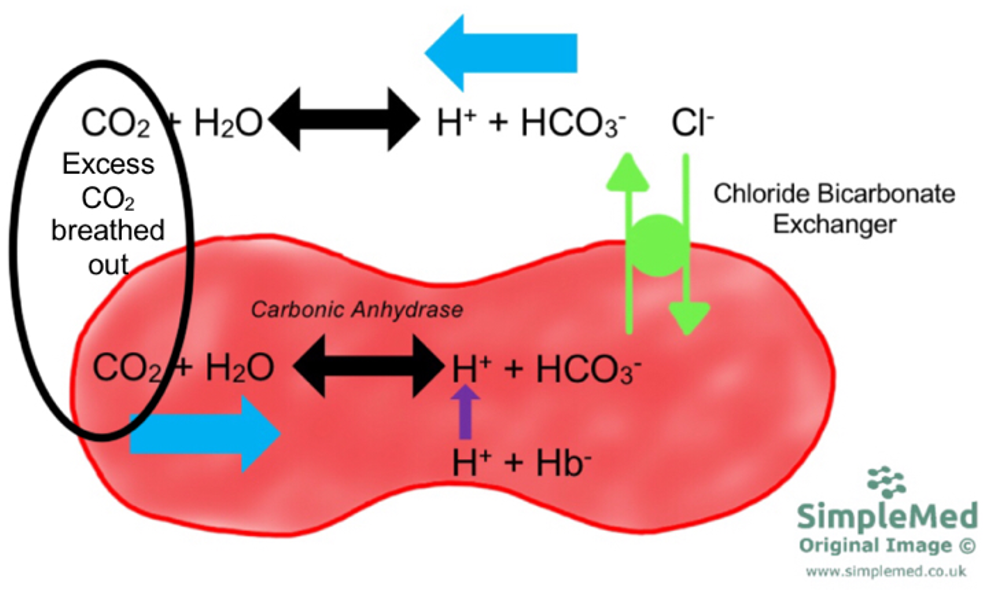 There are three methods of transporting carbon dioxide in the blood: hydrogen carbonate ions, carbon dioxide dissolved in the plasma, and (the one not yet explained) carbamino compounds.

Overall, the majority of carbon dioxide is transported in the form of hydrogen carbonate ions, followed by carbamino compounds, with only a small amount being dissolved in plasma (because most of this is turned into bicarbonate).