Next Lesson - DNA Repair and Cancer

Mutation has two definitions. A mutation is a heritable alteration in a gene or chromosome, mutation is the process which produces that alteration.

Things which cause mutations are called mutagens. These can be exogenous or endogenous.

Common exogenous mutagens can be in the form of ionising radiation and free radicals. This is important to remember as some medical imaging modalities use ionising radiation and thus can cause mutations with prolonged exposure. Therefore, imaging should be ordered only when necessary and should use radiation which is as low as reasonably achievable (ALARA). Other exogenous mutagens are chemicals and anti-cancer agents. Some anti-cancer agents work by purposefully mutating DNA in cancer cells in order to inhibit their ability to undergo mitosis and grow.

Endogenous mutagens can either be in the form of DNA replication defects, or transposable elements. Transposable elements (also known as 'jumping genes') are specific DNA sequences which move (transpose) to random sites in DNA, and can insert themselves into a gene and inactivate it.

Both exogenous and endogenous mutagens can lead to defective or error-prone DNA repair which eventually lead to mutations, or mutagens can directly affect a gene product

Mutations will do one of the following:

Mutations can have differing effects on the synthesis of a polypeptide, from no effect, to a large frameshift (discussed later). 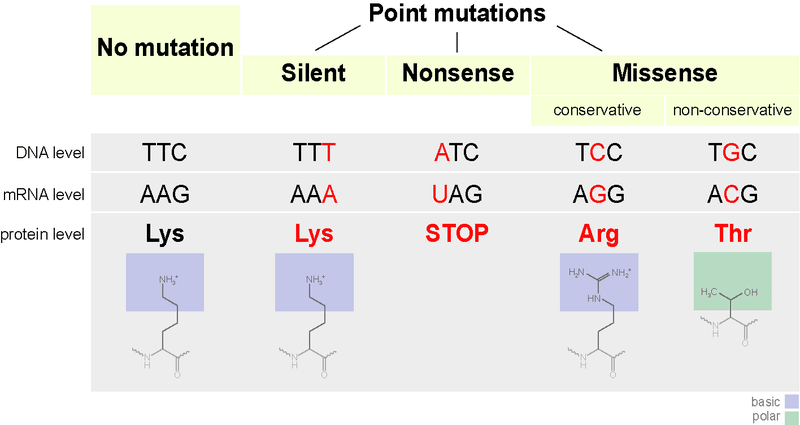 Diagram: Shows the types of different point mutations, and the effects these can have on the amino acid

We can also classify mutations as somatic (occurring in a regular body cell, which will limit the effect of the mutation) or germ-line (occurring in a germ cell like a spermatocyte or an oocyte, which may have a drastic effect on an offspring which inherits this mutation).

It is much more likely to a mutation to be recessive, as there are far more ways in which you can inactivate a gene whereas it is much more difficult to introduce an activating mutation. Failure of one allele can be compensated for by a normally functioning allele – hence it is recessive. Overproduction caused by one allele cannot be compensated for by a normal allele – hence it is dominant.

There are 3 main categories of micromutation.

Frameshift occurs when the DNA reading frame is disrupted by the insertion or deletion of a nucleotide. This has a large downstream effect on all subsequent codons which results in many incorrect amino acids being incorporated into the polypeptide chain.

An example of a disease caused by a single nucleotide mutation is Sickle Cell Anaemia:

This is an inherited disorder of the haemoglobin gene HBB. This mutation causes haemoglobin to precipitate in low oxygen conditions, and causes red blood cells to take on a characteristic sickle shape. This leads to a susceptibility to infections, weakness, impaired growth, and anaemia which is made worse when oxygen is limited. 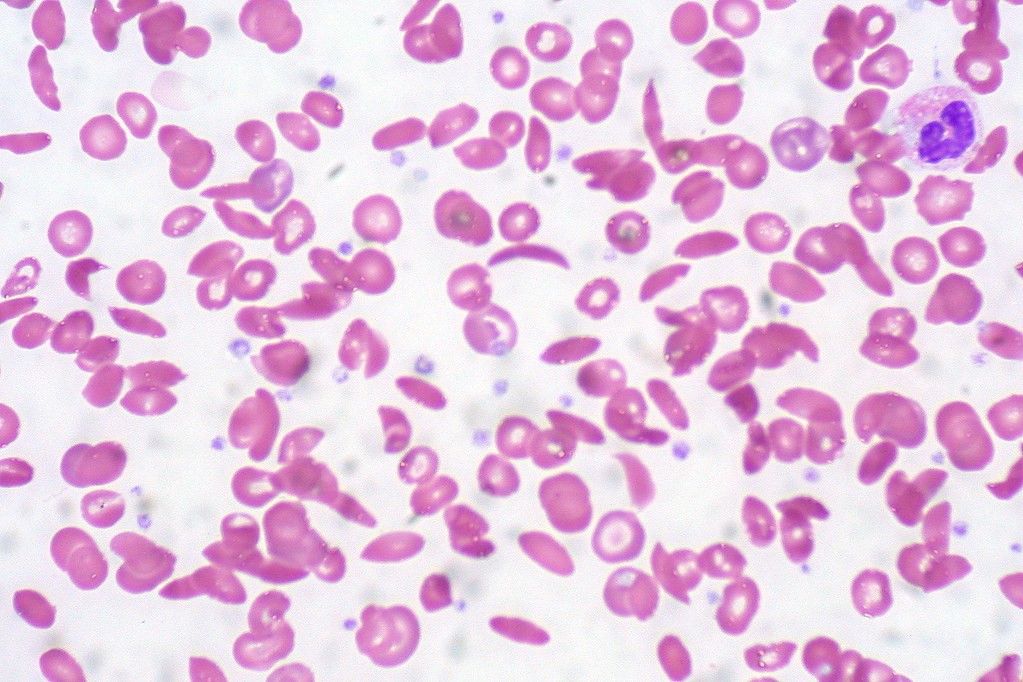 Diagram: Shows a blood film with sickled red blood cells. These are the abnormally shaped cells that look elongated.

The mutation which causes this is substitution (transversion) mutation in codon 7 of HBB where GAG -> GTG. This causes the normal amino acid glutamic acid to become valine.

As the name suggests, these mutations affect entire chromosomes.

As somatic cells have pairs of chromosomes, a chromosomal mutation is unlikely to have a large effect. However, problems tend to arise in germ-line cells through meiosis, as two of the four daughter cells will contain copies of the mutated chromosome.

Cells receiving two copies of a chromosome will have an increase in the expression of the genes contained on the extra chromosome. If the genes function to slow cell growth, they may be fatal to the cell. If the genes promote growth, the cell may grow uncontrollably which may lead to cancer.

Mutations in mitochondrial DNA (mtDNA) can cause mitochondrial disease. Mitochondrial diseases are more pronounced if they were caused by a germ-line mutation as diseased mitochondria are present in multiple organ systems. The effects of these conditions are most observed in organs and tissues which require a lot of energy e.g. the heart, brain, and muscles.

Mitochondrial mutations are only passed on down the maternal line, as mitochondrial in sperm are expended to provide movement, so are discarded on fusion with an oocyte.

Somatic mutations in mitochondria build up over time, due to the limited ability of mtDNA to repair itself. A build-up of these mutations has been linked to some forms of cancer, and increased risk of age-related diseases like heart disease, Alzheimer’s disease, and Parkinson’s disease.

Imagine if there was a mitotic chromosomal mutation in one of the cells at the two cell or four cell stage of embryogenesis. This mutation will be widespread throughout the body of the fully grown individual. This makes the genetic information inside cells highly heterogenous. This is called mosaicism.

Diagram: Illustrates how a genetic mutation at an early stage in embryonic development can be present at many different locations in a full grown adult.