Introduction to Mitosis and Meiosis

By Joshua Sturgeon and Ben Appleby

Next Lesson - Phenotype, Genotype and Inheritance 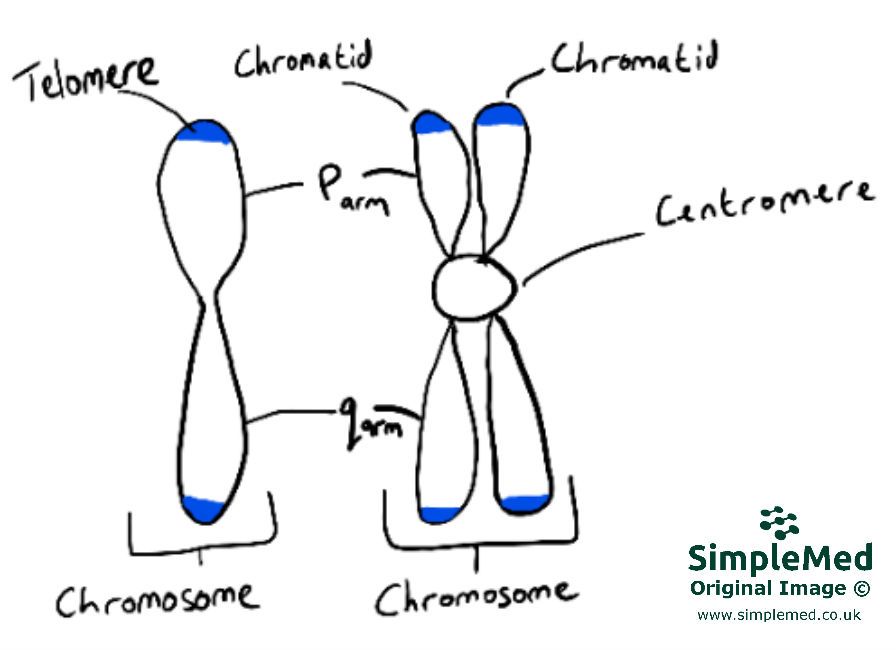 Image: The structure of a chromosome before (left) and after (right) replication of DNA has occurred. Note that the replicated chromosome contains two sister chromatids.

Each chromatid consists of one DNA polymer, with a short (p) arm, and a long (q) arm. Telomeres are located at each end of a chromosome. Telomeres are repeated sequences of DNA (TTAGGG) which protect the chromosome from degradation but also by their nature limit the number of times a single cell can divide by mitosis.
A centromere is a specialised DNA sequence which links the sister chromatids –  centromeres can be found in different places along the length of the chromosome.
Each chromosome is paired in a homologous pair. These pairings are derived from the inherited maternal and paternal genetic material e.g. the maternal chromosome 11 will be in a homologous pair with the paternal chromosome 11. Homologous chromosomes will contain the same genes (99.9% of your genes are identical to any other human). However, the homologous pair may have different variants of the genes (alleles). Inheritance of these alleles lead to varying phenotypes (physical characteristics). 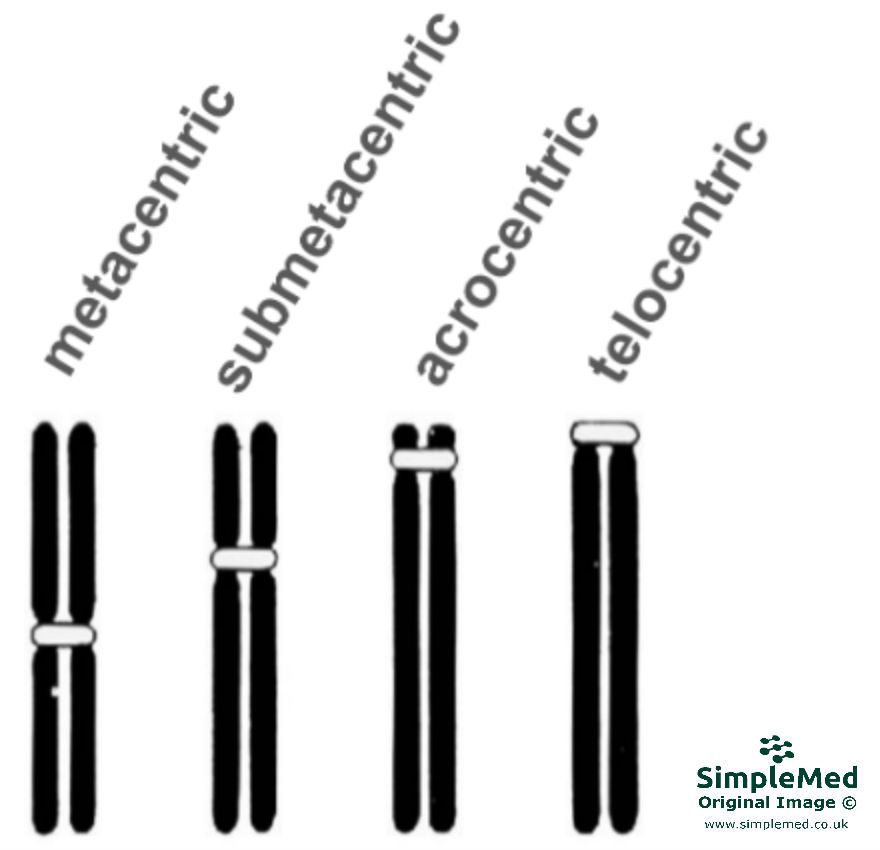 Chromosomes are grouped according to size and shape:

During interphase, chromosomes do not exist as shown in the previous two figures (i.e. as rods) but instead as loose filaments of uncondensed chromatin. The chromosomes only take on the appearance of rods (condensed chromosomes) during division once the chromatin condenses together in prophase.

Although the chromatin is uncondensed and free the chromosomes still occupy specific spaces known as chromosome territories. (Knowledge of the specific areas occupied is not crucial.) 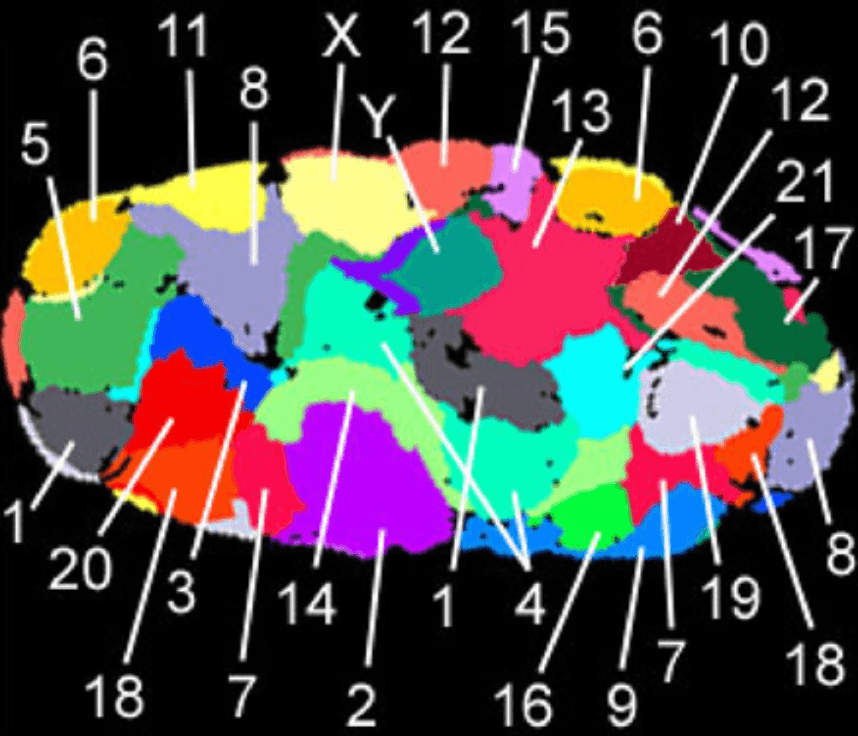 Karyotyping is a method of describing the chromosome composition of a patient. The karyotype is recorded in a standard form including chromosome number, sex complement (XX or XY), and any structural changes. Information in a karyotype is separated by a comma without spaces. A karyotype is derived from a metaphase spread which is a visualisation of all the chromosomes from a cell.

Mitosis is the method of cell division for somatic cells. The process results in two identical daughter cells with the same chromosome content as the parent cell. Mitosis is crucial for growth, regeneration and repair in the human body by allowing for new tissue to be produced.

There are 5 phases of mitosis:

Prometaphase – nuclear envelope dissolves and spindle fibres attach to the kinetochore (found on the centromere).

Metaphase – replicated chromosomes line up along the equator of the cell.

Anaphase – sister chromatids are split and are pulled to opposite poles of the cell.

Telophase – nuclear envelope reforms, the cytoplasm begins to cleave. The chromosomes have now been split from their replicated sister chromatid.

These phases are followed by cytokinesis, which is the splitting of the cytoplasm which results in the formation of 2 daughter cells.

Non-disjunction is the failure of one or more pairs of sister chromatids to separate normally during nuclear division, which results in an abnormal distribution of chromosomes in the daughter cells. In mitosis, this means one of the daughter cells will have 3 copies of one chromosome (trisomy) and one will have only 1 copy (monosomy).

If nondisjunction occurs in the first post-zygotic division (first cell division in a developing embryo making two cells from one) a trisomy cell (with 47 chromosomes) and a monosomy cell (with 45 chromosomes) will be produced. The monosomy cell will be destroyed leaving only the trisomy cell to divide. From this point onward all cells in the body will now be trisomy which may lead to conditions such as Down’s syndrome . This is a non-mosaic karyotype.

If the non-disjunction event happens during a later cell division a slightly different outcome is produced. As before the monosomy cell is destroyed and a trisomy cell is produced. However, by this point multiple successful divisions have occurred meaning there are also surviving diploid cells. In the long term, some cells in the body will be derived from the trisomy cell line, and the rest will be derived from the healthy, normal diploid cell line – this presence of more than one cell line in the body is called mosaicism. This mosaicism can be spread throughout the tissues of the body if division happened earlier, or may be limited to a specific tissue.

Meiosis is a special form of cell division used for production of germ cells. These germ cells have 46 chromosomes, arranged in 23 pairs, same as any other body cell. Meiosis results in the production of four non-identical cells, each with half the chromosome content of the parent cell (a haploid cell).In meiosis, one round of replication is followed by two rounds of division, which can be split into meiosis I and II.

Meiosis I is identical to mitosis, with the cell moving through the same phases with one crucial difference:

In meiosis II, the sister chromatids are split through division of the centromere, becoming chromosomes in their own right, leaving each daughter cell with 23 chromosomes (which were chromatids a moment ago). 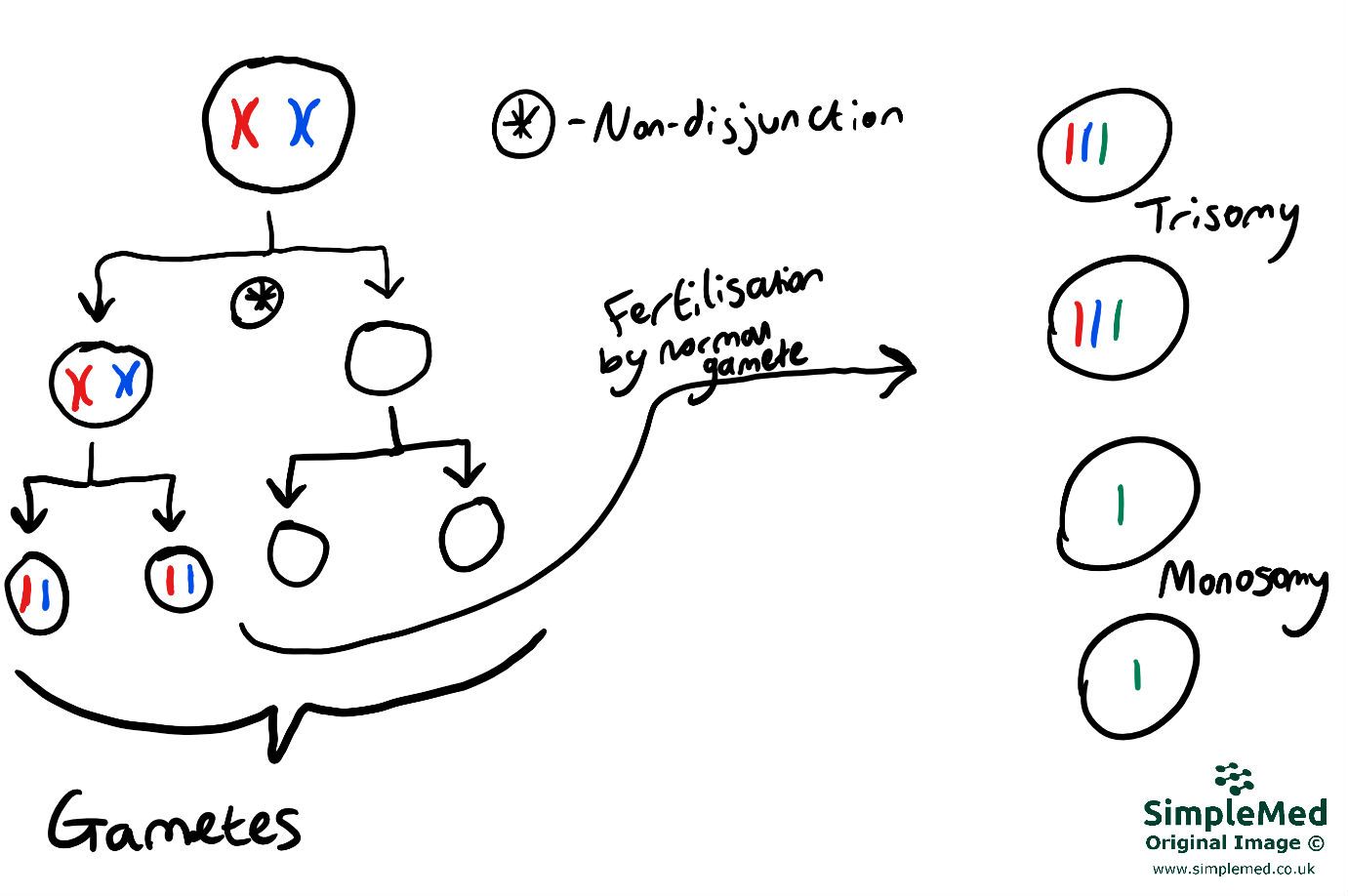 If non-disjunction happens in meiosis II, after fertilisation, 2 zygotes will be normal, one will be monosomic, and one will be trisomic.

96% of Down’s Syndrome cases are caused by non-disjunction in meiosis. 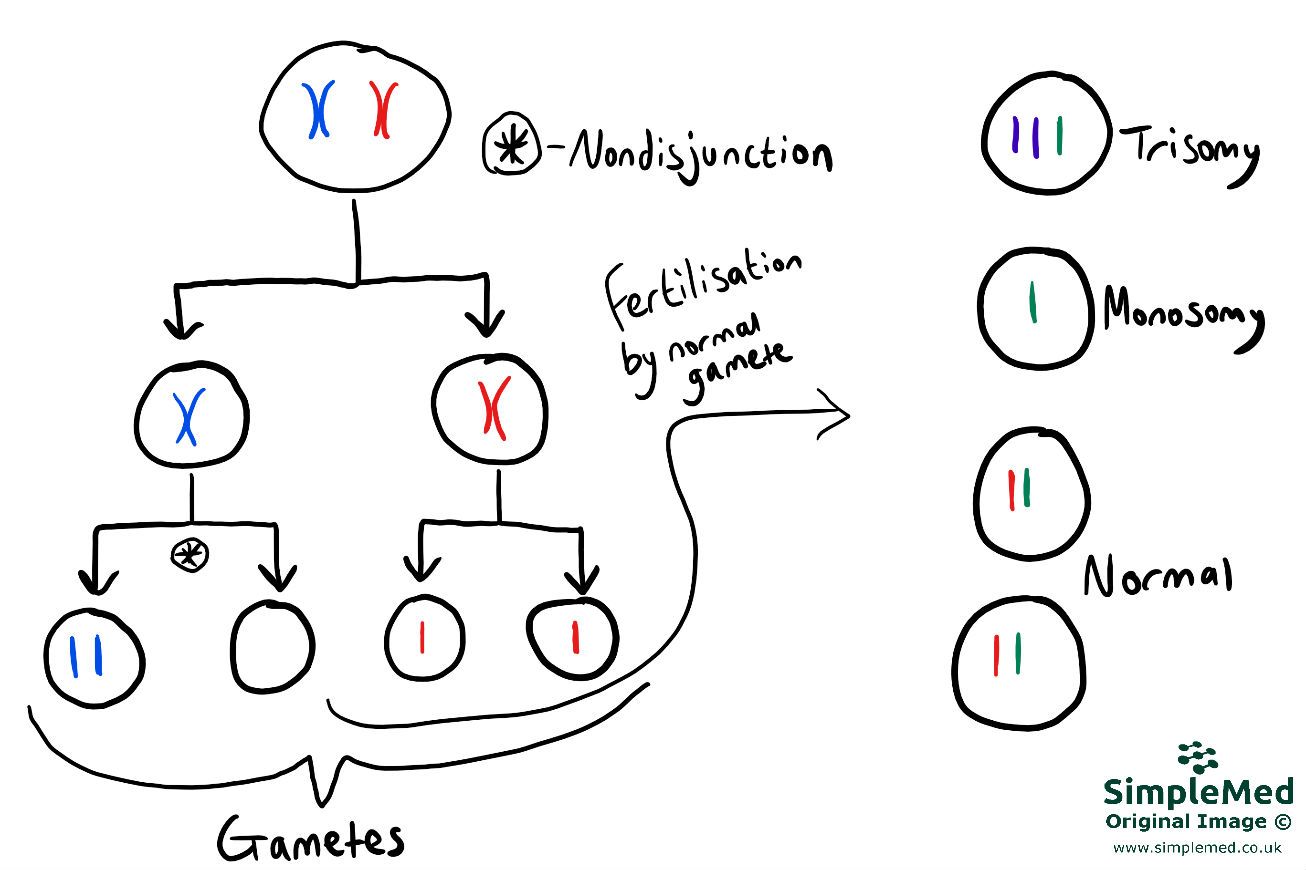 The umbrella term for an incorrect number of chromosomes in a cell- i.e. not 46 - is known as aneuploidy. Aneuploidy can cause a number of genetic conditions depending on whether chromosomes are, missing or in excess, and which specific chromosomes are affected.

Conditions caused by an addition of a single chromosome leading to a total of 47.

The only monosomy which in not immediately lethal in vitro is Turner’s syndrome. Turner’s syndrome results in a karyotype of 45,X or 45,X0 (where 0 denotes lack of a chromosome). All other monosomies are immediately lethal as other than in the sex chromosomes two chromosomes are required at all times. However, as in females the second X is essentially surplus (as males (XY) can of course survive with one X) the condition is survivable but does bring with it abnormalities and symptoms. Patient’s with Turners will have undeveloped streak ovaries and will be shorter than average. All Turner’s syndrome patients are female.

Overall, one spermatogonium divides into 4 mature sperm. This process takes around 60 days.

Overall, one oogonium divides into 1 mature ovum and 3 polar bodies.

Oogenesis take 12-50 years, as cells are arrested in meiosis I until after puberty, where one cell will mature per month for the rest of a female’s reproductive life.

Impact of Missegregation in Meiosis:

Humans are not very good at meiosis, around 30 in 100 meiotic events have a mis-segregation error. These errors have been identified to cause: