Next Lesson - Artery and Vein Disease

Heart failure is the inability of the heart to meet the body’s demands. It is a clinical syndrome of reduced cardiac output (CO), tissue hypoperfusion, increased pulmonary pressure and tissue congestion.

There are many causes of heart failure, including:

A main cause of heart failure is the stroke volume (SV) is reduced. The causes of this can be split into three categories:

Heart failure has two main classifications based on the equation: 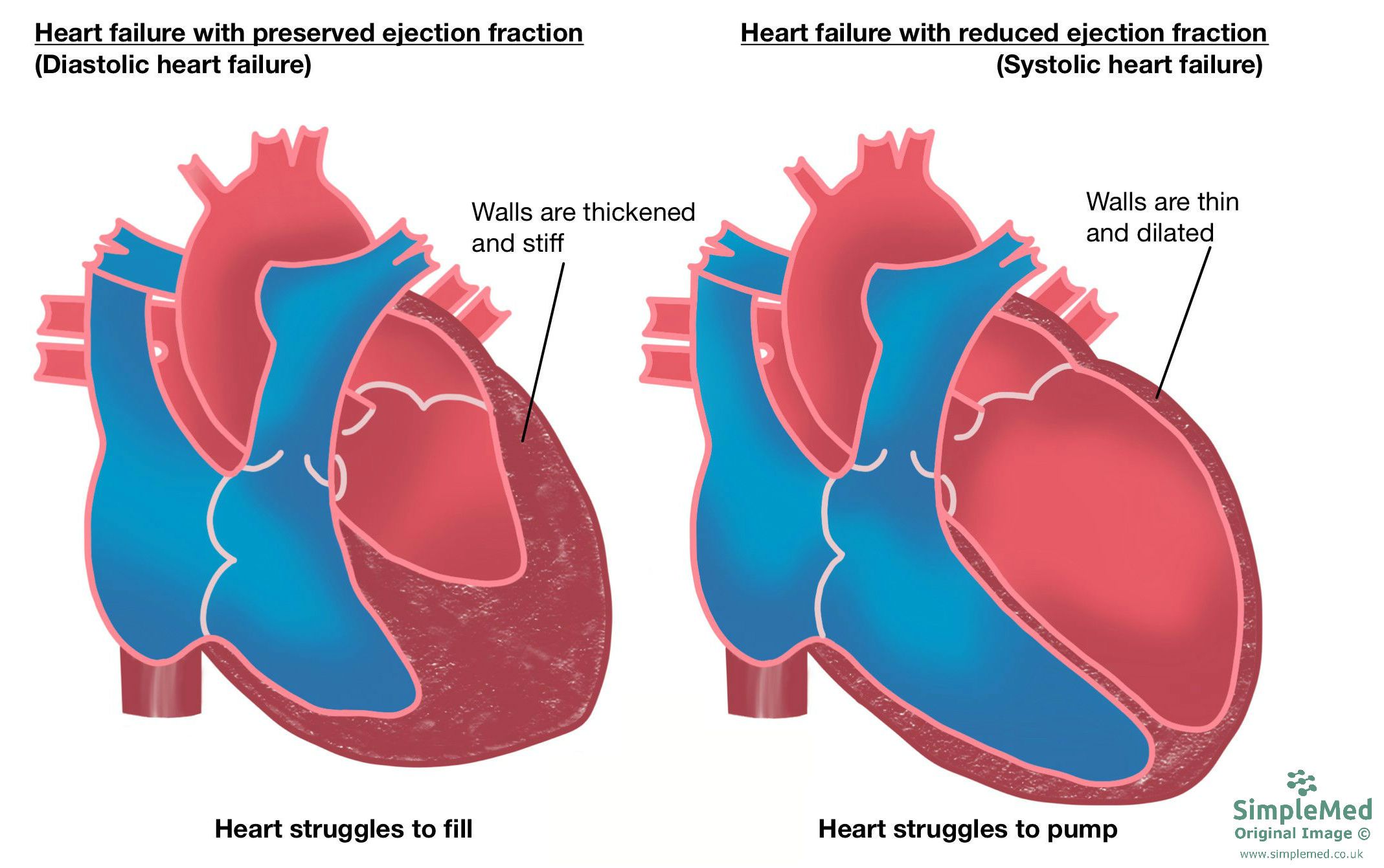 Diagram - The classification of heart failure

Heart failure can also be classified based on the symptoms that patients experience. The classes are:

This is all an attempt to increase the BP but in this reality culminates in an increased after-load and pre-load which puts even more strain on the failing heart.

Signs and Symptoms of Heart Failure

The signs and symptoms of heart failure depend on the side of the heart affected. This determines whether the pulmonary or systemic circulation is predominantly affected.

Full Blood Count – check for anaemia as the symptoms of anaemia are similar to heart failure. Anaemia can worsen heart failure as it puts further strain on the heart to meet the body's demands.

Electrolytes and renal function – chronic kidney failure causes fluid overload as they are not removing the fluid from the body. Fluid overload can cause the symptoms of heart failure.

Brain Natriuretic Peptide (BNP) – BNP is produced by the stretching of ventricles. It is produced to try and reduce BP by increasing sodium loss and therefore increasing water loss.

ECG – an abnormal ECG with a raised BNP provides evidence for heart failure.

Coronary angiography – this technique allows for imaging of the coronary arteries and can be used to determine if they are blocked by an atherosclerotic plaque. If there is a blockage of a coronary artery, the oxygen delivery to the myocardium is reduced, putting strain on the heart. Blockage can lead to ischaemia and acute coronary syndromes.

Management of heart failure depends on whether it is acute or chronic.

Acute is managed in hospital in the following way:

Chronic heart failure is managed by: