What is a Membrane?

Cellular membranes are microscopic barriers which form the boundaries of the cell and most of its organelles – they are primarily composed of lipid and protein.

Functions of biological membranes include:

Cell membranes are composed primarily of a phospholipid bilayer and associated proteins; they also contains a smaller amount of carbohydrate. It is also important to remember that membranes are hydrated structures, with water comprising 20% of the hydrated mass.

Phospholipids are amphipathic molecules, meaning that they have both hydrophilic and hydrophobic parts. This causes them to form a bilayer when exposed to water, with hydrophobic tails pointing inwards and hydrophilic heads facing outwards, in contact with water.

Also bound to the glycerol is a phosphate head, which makes up the hydrophilic portion of the phospholipid. The phosphate head is often modified with another organic molecule: these include choline (most common), serine, inositol and ethanolamine. 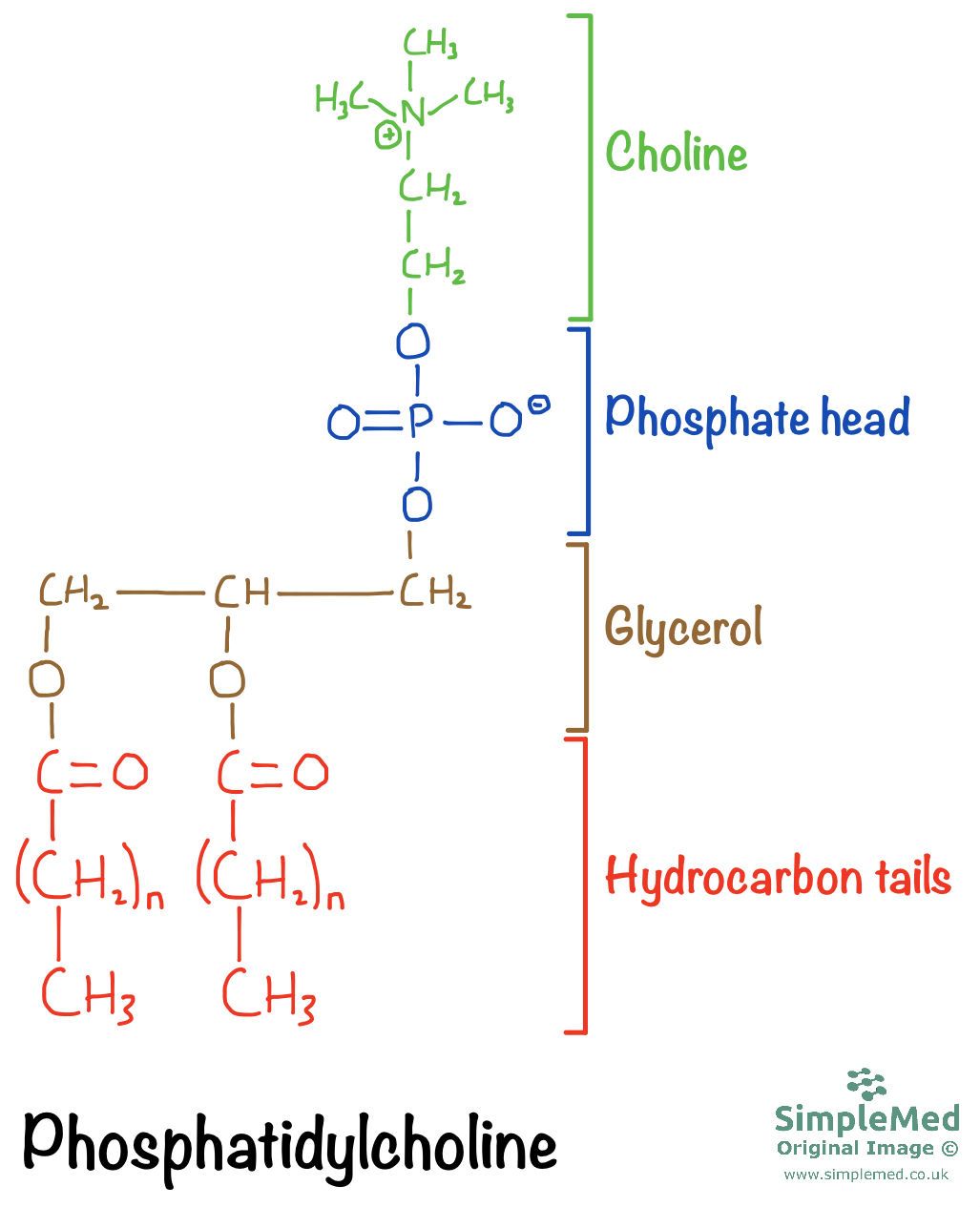 The membrane is in a liquid state at room temperature. This supports the idea of a Fluid-Mosaic model, which describes a fluid lipid bilayer with interspersed proteins which are free to move throughout the bilayer.

Phospholipids are capable of a wide range of movement:

Membrane proteins are bit more restricted in terms of mobility:

Proteins are not capable of flip-flop as they are too large and so would require too much energy for spontaneous flip-flop.

Many factors contribute to the fluidity of the membrane: 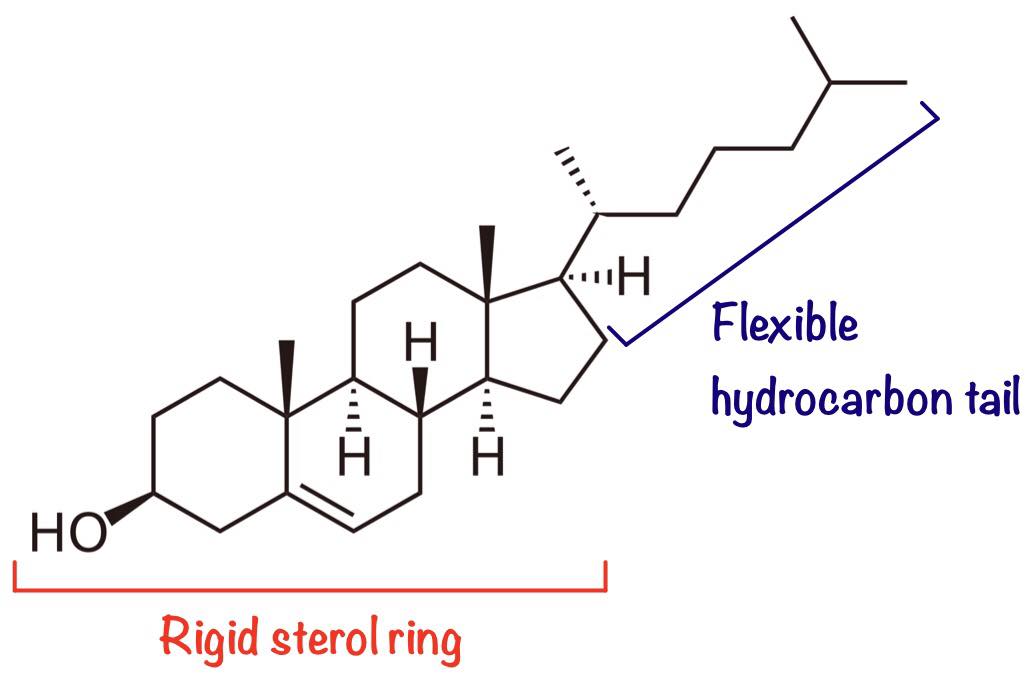 Control of membrane fluidity is important as it has implications for structure and membrane permeability – the more fluid the membrane, the higher its permeability.

Despite in theory being able to move freely through the lipid bilayer, the movement of membrane proteins can be restricted by several mechanisms:

Tight junctions play a particularly important role in cell polarisation, as they separate protein populations on the apical and basolateral membranes.

Proteins associated with the cell membrane can be integral (intrinsic) or peripheral (extrinsic):

Integral proteins are embedded within the phospholipid lipid bilayer; they may or may not span the entire width of the membrane (where they are referred to as transmembrane). These proteins must have an extensive hydrophobic domain to interact with the hydrocarbon tails of the lipid bilayer. Examples include channels, transporters, receptors (namely G-protein coupled and tyrosine kinase receptors), adhesion proteins and some enzymes (e.g. ATP synthase).

Peripheral proteins are bound to the surface of the membrane via electrostatic and hydrogen bond interactions with the polar head groups of phospholipids. Unlike integral proteins, peripheral proteins can become dissociated from the membrane by disturbances in pH as this will change the ionic configuration of amino acid residues. Examples include G-proteins, cytoskeletal proteins (e.g. spectrin), electron carriers (e.g. cytochrome C) and some enzymes (e.g. phospholipase C).

Membrane proteins can also by modified with a carbohydrate group to form glycoproteins.

Diagram - Structure of the cell membrane, showing the different types of membrane proteins

Proteins of the erythrocyte membrane are essential for maintaining the biconcave shape of the cell. This is achieved by vertical interaction between the membrane, its associated membrane proteins and the cytoskeleton.

The proteins of the erythrocyte membrane include: 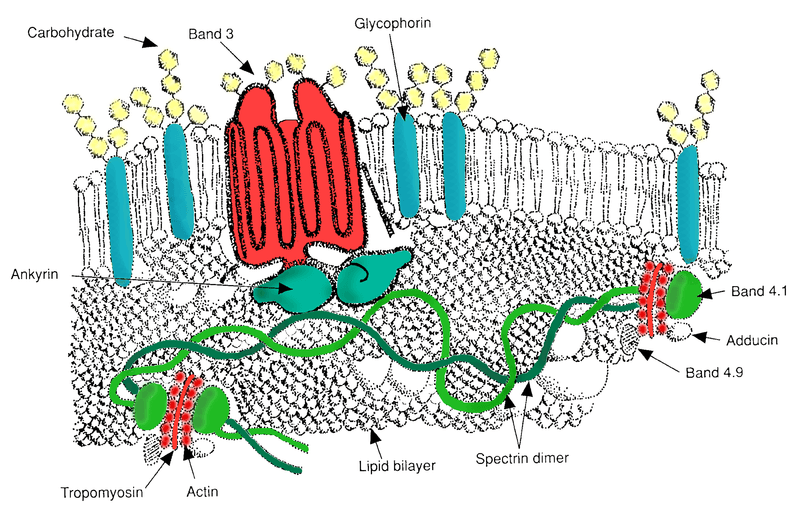 Diagram - Structure of the erythrocyte membrane, with major proteins included

Deficiency of the functional form of any one of these proteins (most commonly ankyrin) can result in a condition called hereditary spherocytosis. This is a condition where red blood cells take on a spherical shape instead of the classical biconcave shape, due to loss of vertical interaction between the cytoskeleton and plasma membrane. This causes erythrocytes to become less deformable, leading to haemolysis.

The processes involved in membrane protein biosynthesis are as follows:

NB: The process for peripheral membrane proteins will be slightly different as they do not become embedded in the membrane.