Introduction to the Breast

In this article the main focus will be on the female breasts as disease is much more prevalent in women. However, it is important to note that men can still suffer breast disease, but because their breast structure is simpler, it is less likely.

The breasts are a pair of organs on the anterior side of the thoracic region that lie superficial to the pectoral fascia covering the pectoralis major muscle. They are comprised of a deep network of mammary glands surrounded by adipose and suspensory retinacula tissue (also known as interlobular stroma). They are generally circular in nature with a central nipple surrounded by the areola (a small section of pigmented skin surrounding the nipple). The areolae contain sebaceous glands which secrete lipoid fluid to prevent cracking of the nipple, and act as a target for the baby to aim for during breast feeding.

The suspensory retinaculum is a network of fibrous connective tissue (ligaments) covering the breast to help support it and prevent ptosis (drooping) by anchoring the breast to the chest wall. They also function to keep the secretary lobules separate. They are sometimes known as Cooper’s ligaments.

The mass of adipose tissue in the breast makes up most of its contents and supports the mammary glands.

Breasts contain mammary glands which are responsible for lactation. Mammary glands are formed by multiple lobules that secrete milk into the lactiferous ducts, which is then stored in the lactiferous sinuses before the milk is ejected through pores in the nipple during breast feeding.

There is a small potential space called the retromammary space in-between the posterior surface of the breast and the pectoral fascia which can be utilised during surgery. 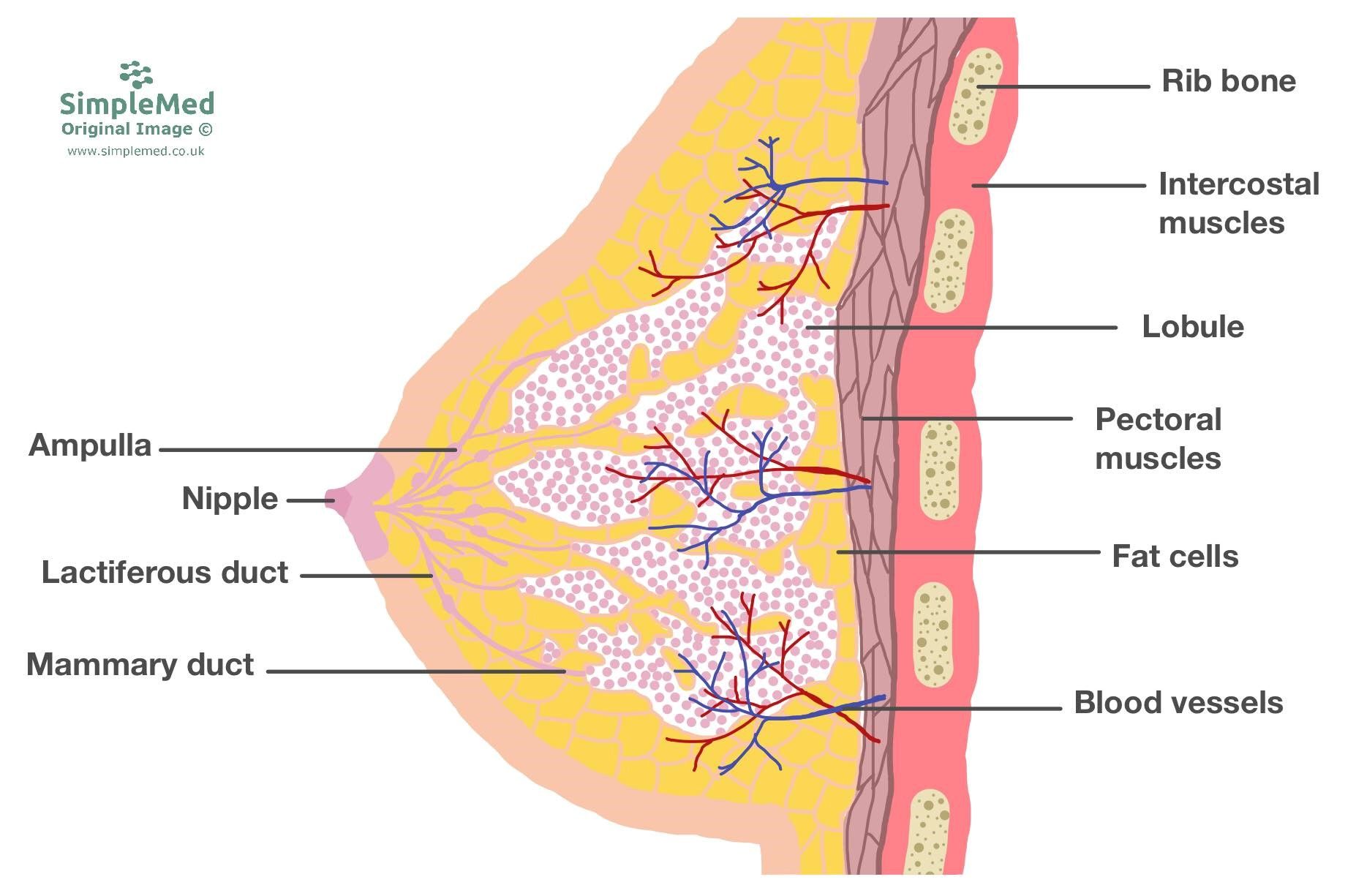 Diagram - The anatomical structure of the breast

The breast is supplied by a variety of blood vessels:

The venous supply to the breast is equivalent to the arterial supply.

Lymphatic drainage of the breast is to the axillary (majority), parasternal and the posterior intercostal nodes. These play an important role in the pathophysiology of breast cancer as the axillary nodes are a common site for initial metastasis.

The anterior and lateral cutaneous branches of the 4th to 6th intercostal nerves innervate both sensory and autonomic function in the breast.

Before puberty the breast tissue contains very few lobules, and so are identical in both males and females. At the beginning of puberty, often before the menstrual period begins, there is an increase in both the number of lobules and the volume of the interlobular stroma (adipose and suspensory tissue), and this is known as thelarche. Swelling and tenderness can occur in this time.

During pregnancy there is an increase in both size and numbers of lobules, and a decrease in the volume of stroma. This occurs to prepare the breast for lactation and are known as secretory changes.

After the period of breastfeeding atrophy of the lobules occurs, reducing both size and number of lobules, and so reduces the amount of milk produced in the breast.

In young women the breasts mainly consist of dense fibrous suspensory tissue with some adipose tissue. During aging the suspensory tissue is replaced by adipose tissue, a key point in investigating breast disease. When investigating younger women, ultrasound scans are used as mammograms are not as effective due to the high density of the tissue. In older women, the breasts are less dense, meaning that mammography is a viable option.

Palpable masses are very common in breasts. Many will be at least 2cm in size before they are able to be felt, depending on both the size of the breast and how superficial the mass is. Differentials for masses include the normal nodularity of breasts, cysts, fibroadenomas, lipomas and invasive carcinomas. Red flag features for invasive carcinomas are lumps that are hard, craggy and fixed. All breast masses should be investigated and referred to a specialist, as it is impossible to know for sure the origin of the mass without imaging.

Nipple discharge can occur with a range of different conditions and even stimulation of the normal breast. The discharge can be milky (galactorrhoea) due to a high level of prolactin, a result of endocrine disorders such as a pituitary adenoma, or it could be due to high levels of oestrogen, for example as a  side effect of medications like the oral contraceptive pill. Bloody or serous discharge can be a sign of benign lesions such as an intraductal papilloma, or malignant lesions, especially if it occurs spontaneously and unilaterally. This should always be investigated.

Skin changes can sometimes be seen in the breast if it becomes infected (e.g. red and swollen), or if the breast becomes oedematous. Poor lymphatic drainage to the axilla from either metastasis or lymph node clearances can lead to an appearance known as peau d’orange. This is when the cooper’s suspensory ligaments restrict the swelling and pull the skin back at their attachments, causing lots of little dimples on the surface of the breast like an orange skin. 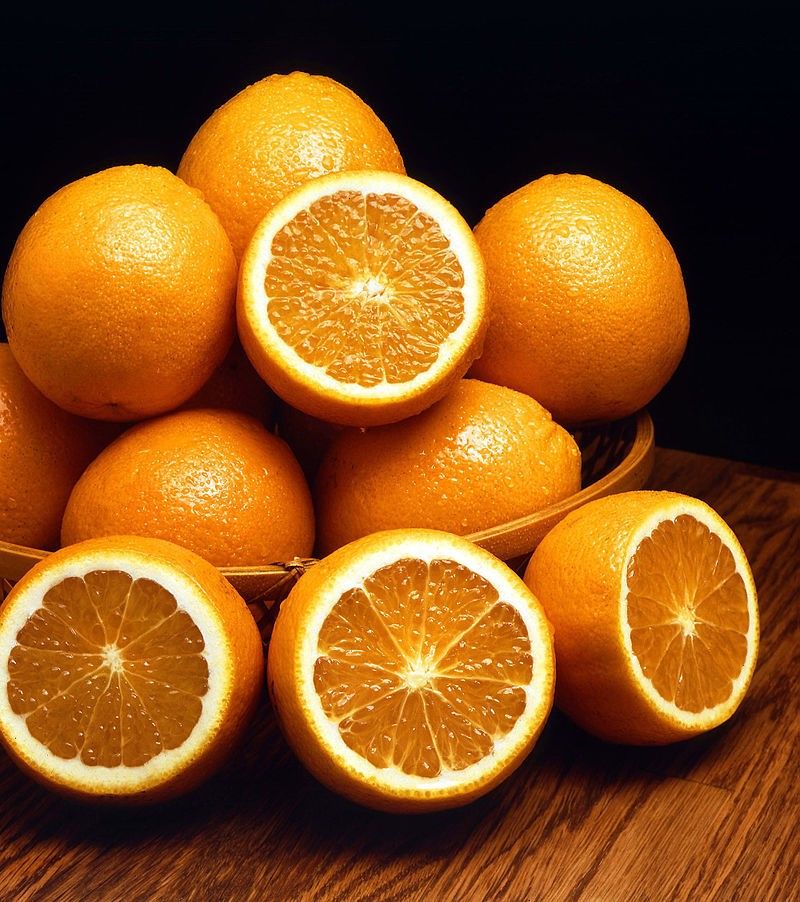 As already mentioned, ultrasound scans and mammograms are the most frequently used imaging strategies for breast tissue, with ultrasound being used more commonly in younger women with denser breast tissue.

Mammographs are radiological images taken of breasts in both a craniocaudal and mediolateral view, allowing the differentiation of any pathology from the normal breast tissue more accurately.

In the UK, women between the ages of 50-71 are invited for mammography every three years to try and detect small, invasive tumours before they are palpable. As with all screening and imaging, there is a risk of over investigating benign breast lumps, which puts patients through unnecessary biopsy and operations. 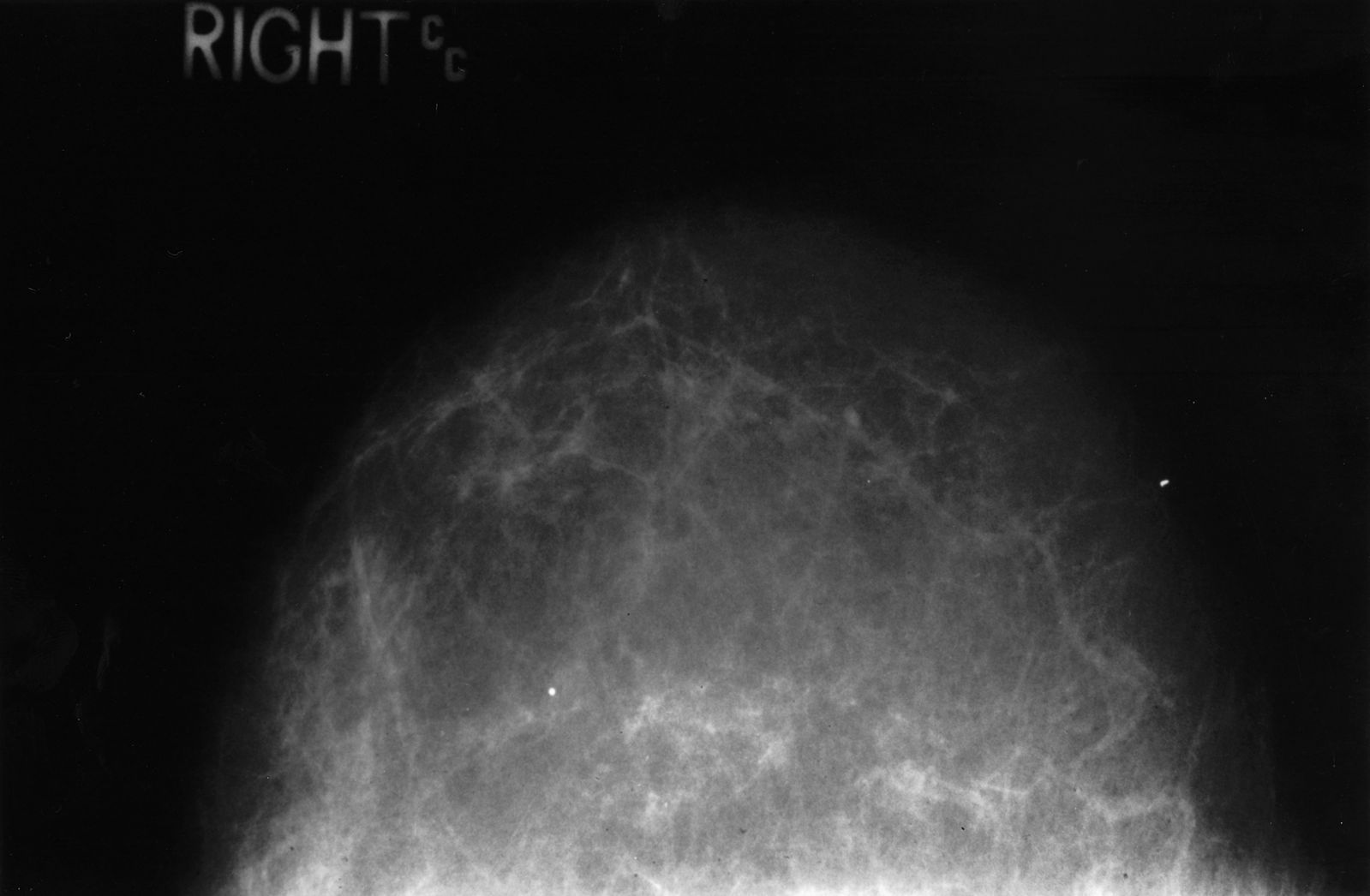