Next Lesson - Pneumothorax and Pleural Effusion

Tuberculosis (TB) is a chronic, communicable disease, caused by the bacteria Mycobacterium tuberculosis. TB is common in areas like Africa, Asia and Latin America. It is uncommon in the UK, but the highest incidences occur in patients who have emigrated to the UK from a high risk area.

Mycobacterium tuberculosis is an aerobic organism that has a very unusual waxy component to its cell membrane, meaning that is cannot be reliably Gram stained. This means that Ziehl-Neelsen staining is the best mechanism for visualisation, taking between 2-6 weeks to culture. Due to the result of the Ziehl-Neelsen staining, Mycobacterium tuberculosis is known as an acid-fast bacilli. 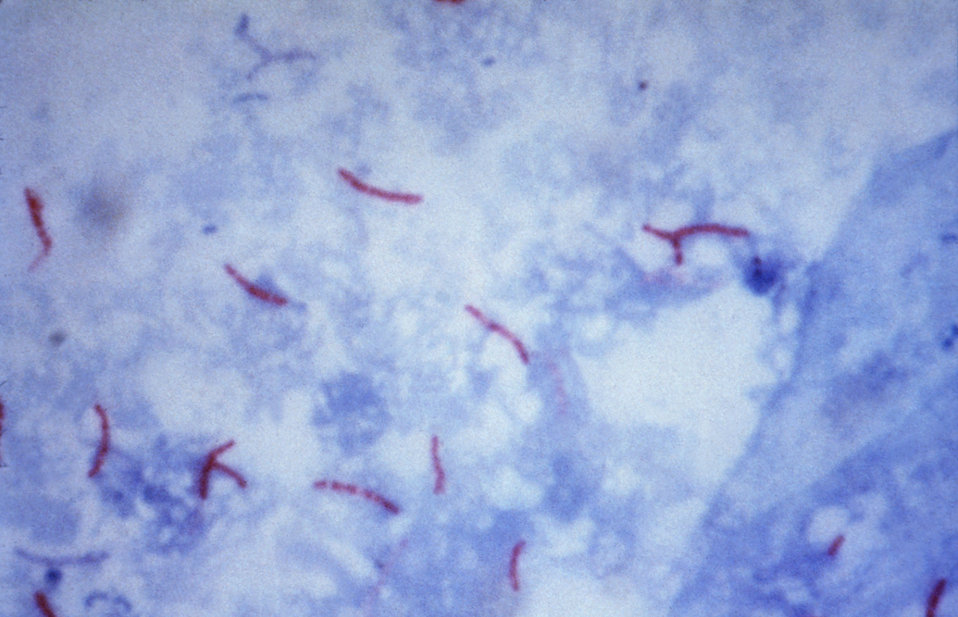 TB is transmitted via droplet transmission, and an infective dose is between 1 and 10 bacilli, meaning the amount needed to infect another person is small.

Once the bacilli are inhaled by the body, alveolar macrophages engulf the bacterial deposits in alveoli, but are unable to kill them through the normal release of lysosomes, due to their specialised cell wall.

The ingestion of the tuberculosis bacterium by epithelioid macrophages causes a granulomatous reaction, because even with the adaptations and the recruitment of the cell mediated immune system (T lymphocytes) the bacteria is resistant. This forms a tubercle, a spherical granuloma with central cessation. Under the microscope you are able to see caseous necrosis, epithelioid macrophages, Langhans giant cells and lymphocytes in a TB granuloma.

The initial TB infection with creation of the tubercle occurs on the first exposure to Mycobacterium tuberculosis. When the bacilli then deposits in the alveoli, there is usually the development of a primary or Ghon’s focus, a sub-pleural group of these tubercles, which can occur in any lung zone.

Most TB infections at this stage will heal, either with or without calcification of the primary complex.

However, in most people, before healing can occur some TB bacilli will enter the blood stream via the lymphatic drainage, resulting in haematogenous spread of the bacilli to other parts of the lung and other organs. However, as the patient has developed cell mediated immunity against Mycobacterium tuberculosis, they will remain asymptomatic and the infection will be contained. This state can continue for years, or even for the rest of the patient’s life.

This phase, when the patient has the infection present but no symptoms of active disease, is known as latent tuberculosis. The person will remain well, but the potential for reactivation at any site is always present. Reactivation usually occurs when the host’s immune response is impaired, for example by infection with HIV, a haematological malignancy, prolonged immunotherapy, or substance abuse. At this point, the epithelioid macrophages containing the bacilli will fail, and the bacilli will spread, causing active infection again.

Latent TB Those initially infected with TB have around a 1 in 10 chance of developing active disease at some point in their life, either through the development of primary TB at the initial time of infection, or due to reactivation of latent TB following initial infection.

Primary TB occurs when the primary complex doesn’t heal, but instead progresses to active TB. The pathology seen in primary TB is similar to the pathology in reactivation of latent TB.

Reactivation of latent TB occurs most often in the lungs, most commonly in the upper lung zones due to the higher pO2 encouraging activation.

The following sequelae occur after activation through either mechanism:

Extra-pulmonary tuberculosis occurs when there is reactivation of latent TB in sites other than the lungs, resulting in active TB (note the difference between miliary TB, in which there is widespread active infection but it started in the lungs). Common sites include lymph nodes, bones, joints, the central nervous system, GI tract and urinary tract. This can cause a wide variety of symptoms depending on which organ systems are affected.

TB has a gradual onset, and symptoms of pulmonary TB include:

There may also be haemoptysis due to the haemorrhage discussed earlier, but this will not happen in every patient.

There may be crackles on auscultation, but there may also be no clinical signs present, meaning a chest radiograph is essential in establishing a diagnosis. If there is fibrosis or a pleural effusion present, then clinical signs of these may be apparent.

A diagnosis of TB is more likely, and should therefore be considered in, people who were born outside of the UK, has a recent travel history to an area where TB is common, are immunocompromised, or have been in close contact with someone with TB. 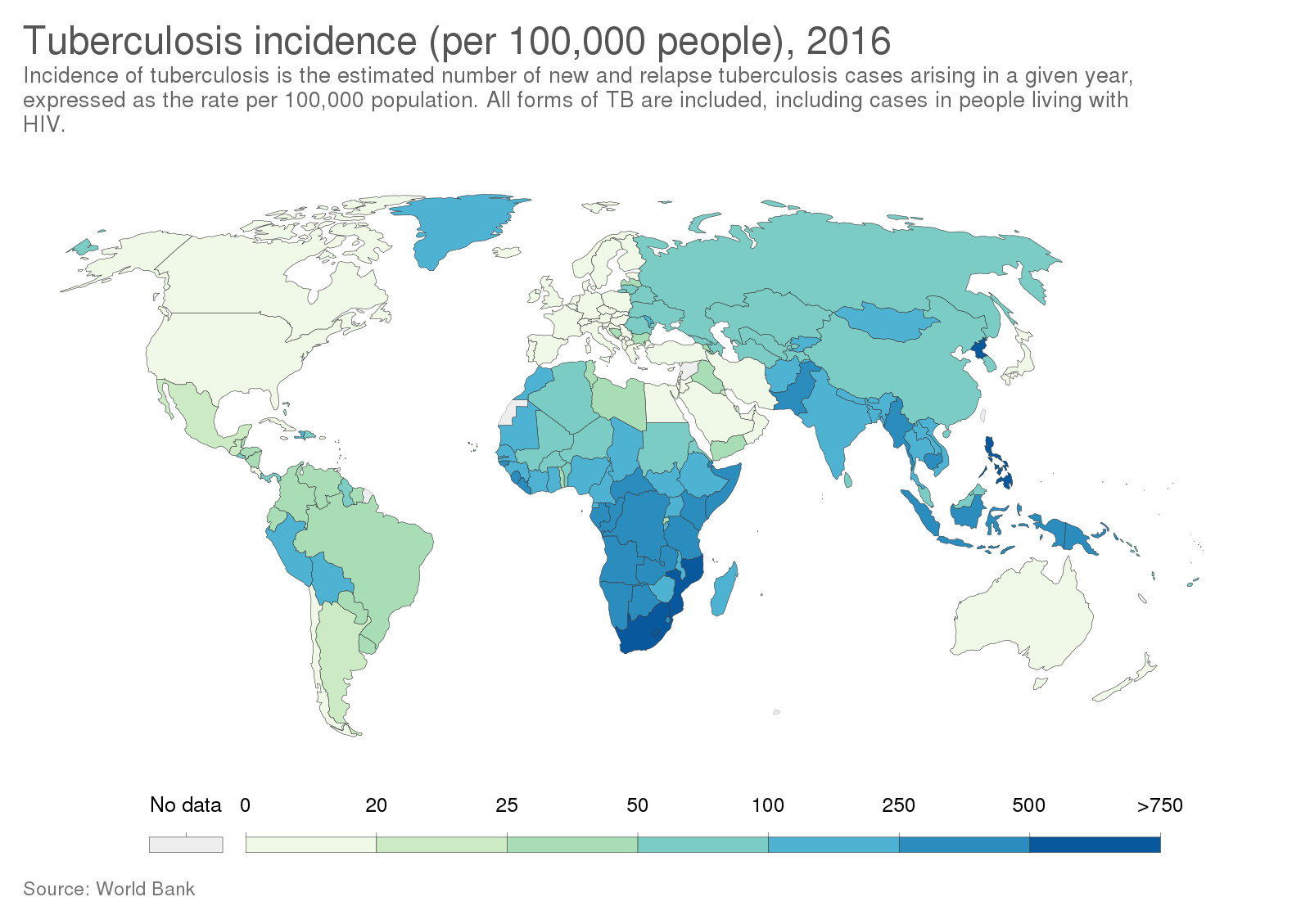 Diagram - The incidence (new cases in a year) of tuberculosis in 2016. The darker the blue, the more cases in that region. This information can be helpful when determining if a patient is at high risk of contact with TB

Two different tests can be used to establish whether someone has a latent TB infection: the QuantiFERON test or the Tuberculin skin test.

On a chest radiograph there will be shadowing, which may be in the form of patchy solid lesions, cavitated solid lesions, or streaky fibrotic flecks of calcification.

Image - Chest radiograph showing the shadowing seen in primary pulmonary TB. It shows the inflammation contained to one area (the right lower and middle lobes) 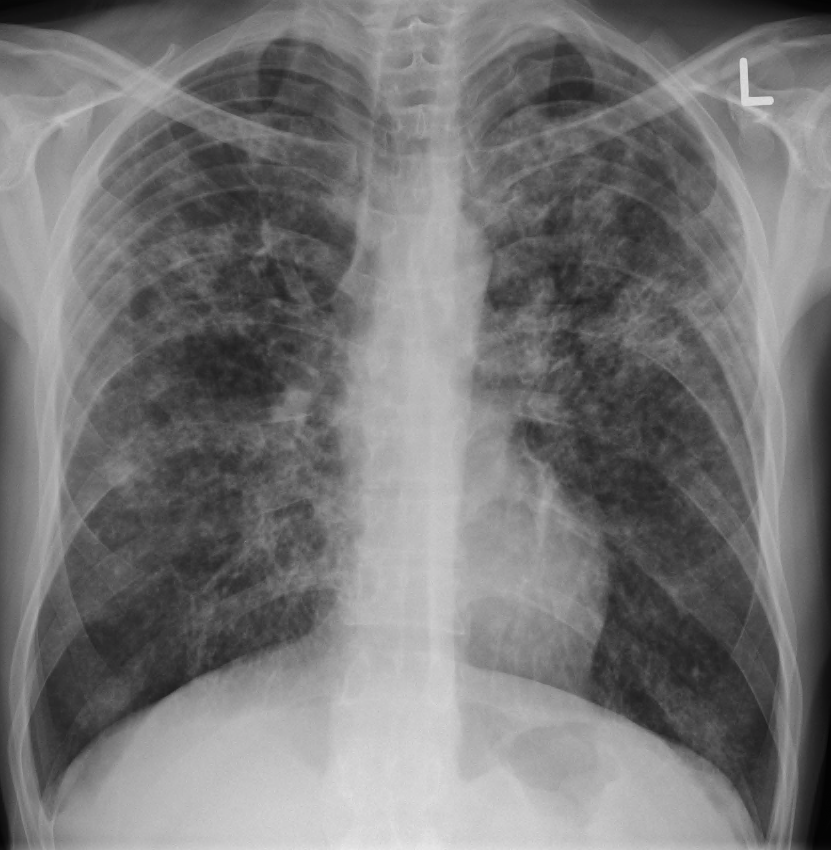 Image - Miliary TB, when the Mycobacterium tuberculosis has spread throughout the lungs (shown by the hazy appearance across all lung fields) due to spread through a blood vessel

However, a definitive diagnosis is established by the identification of the bacillus in sputum culture. In extra-pulmonary TB, investigations such as endoscopy, lumbar puncture or MRI may be indicated.

Tuberculosis is treated through a long course of several antibiotics. At the time of writing this article the recommended antibiotic treatment is:

The four drugs should be taken at the same time, taking all four for the first two months and then the rifampicin and isoniazid for a further four months. This combination therapy is used to prevent the increase of antibiotic-resistant strains, and to negate the effect of already resistant strains, as it is unlikely that the infection will be resistant to all four drugs.

These drugs have a wide array of severe side effects (this is just a selection):

This means that medical management of side effects is common: for example, vitamin B6 should be taken with isoniazid to prevent peripheral nerve damage.

The infectivity of sputum becomes minimal two weeks after commencing treatment, meaning the patient is less infective to others, but the course must be finished to eradicate the disease in infected people.