By Marcus Judge and Ethan Kavanagh

The human body has an amazing system to defend itself against infectious disease – the immune system. It has two arms of protection; innate and adaptive immunity. The former is what we are focusing on here.

Properties of the Innate Immune System

The human body has an amazing system to defend itself against infectious disease – the immune system. It has two arms of protection; innate and adaptive immunity. The former is what we are focusing on here.

Properties of the Innate Immune System

Innate immunity is the front-line defence against any pathogen that tries to attack the body. It is referred to as "non-specific", as it protects from everything that is "non-self" (not produced by the body) equally. It is made of multiple components, ranging from the physical wall of our skin against pathogens that are always there, to immune cells designed to recognise non-self antigens (markers) and destroy them.

As you might expect, the innate response is fast (acting within seconds). It also has no capacity for memory unlike the adaptive immune system.

In summary the innate immune system is: Fast, non-specific, standardised and has no memory.

The adaptive immune system by contrast is; slow, specific, long lasting with varying intensity and has memory. 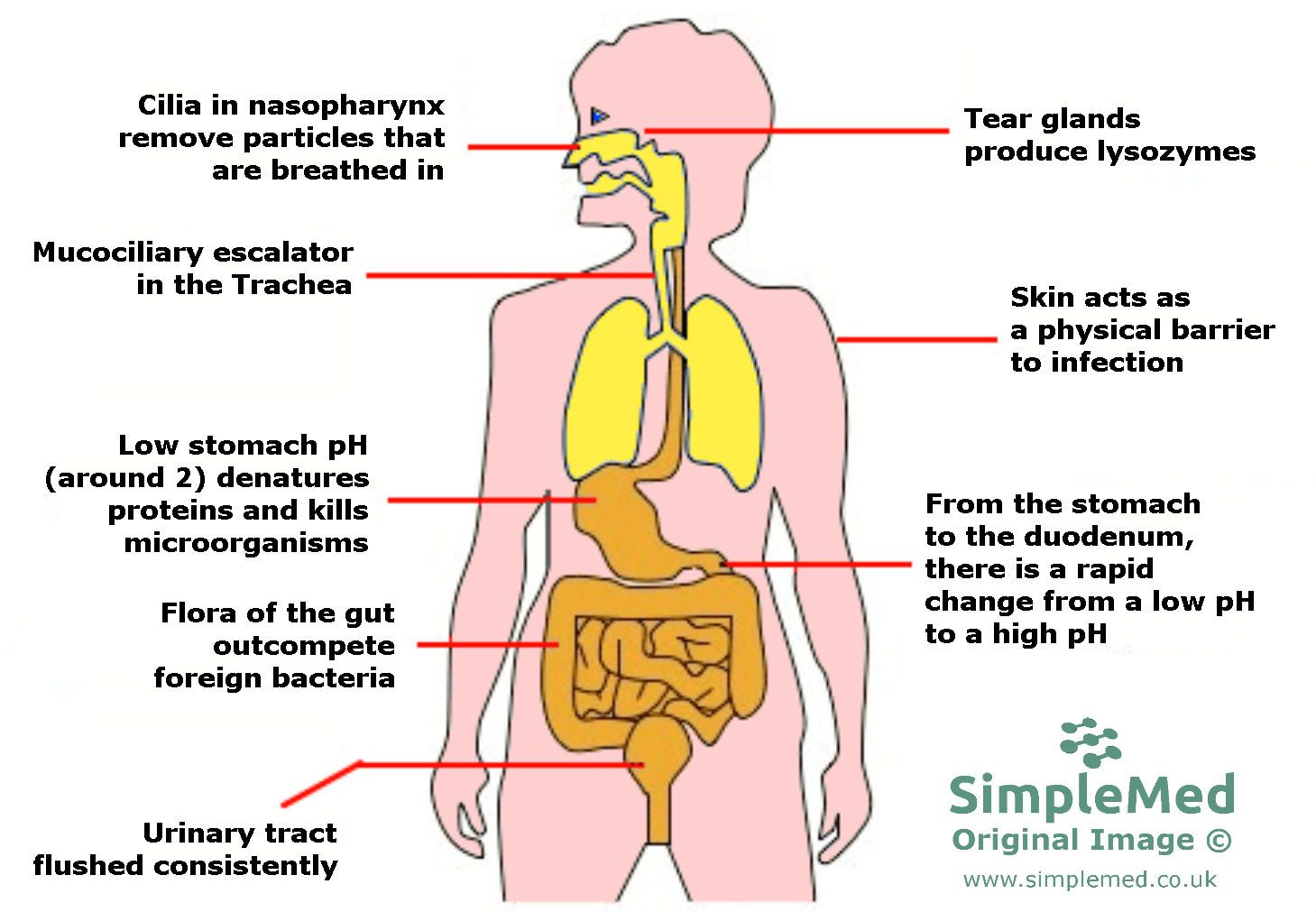 Image: The innate physical, physiological, biological and chemical mechanisms of defence in the human body

Barriers of the innate immune system

Alongside holding everything together, the skin is the main physical barrier that is preventing the bacteria present everywhere from infecting humans. It can completely regenerate in as quickly as 27 days and is also elastic, so it can twist and stretch as our joints move. This makes it the ideal covering for the body.

Of course, the skin isn’t continuous like one big bubble around us (we need to eat, breathe and excrete waste products) so these tracts have a different lining. Lining the openings to the body are different mucous membranes, which can be found in tracts e.g. respiratory tract. Each mucosal layer is specialised depending on its location.

For example, the respiratory epithelium is lined with cilia and goblet cells. The mucus (a chemical barrier) in the respiratory tract is produced from these goblet cells and traps anything that contacts the inside of your respiratory tract. Anything trapped by the mucus (including the mucus) is transported into the mouth by cilia (known as the muco-ciliary escalator). Cilia are finger-like projections that stick out along the mucosal membrane and beat in synchrony. This beating shifts the mucus and any contained pathogens upward so it can be coughed out of the body or be swallowed where it can be destroyed in the stomach.

A major problem with this defence mechanism is that once it becomes damaged (e.g. a scrape or cut), it then allows pathogens through freely into tissue - this is a particular issue with the commensal bacteria of the skin (bacteria which usually live on the skin without causing harm), as these can become pathogenic upon entering the body via this mechanism. This is why it is important to clean wounds before being sealed to prevent non-sterile material from being trapped under the skin and leading to infection. The skin does have the ability to heal if it has been cut, but this takes time.

There are several different physiological barriers that the innate immune system has up its sleeve. As mentioned above, coughing is a response used by the innate immune system to remove anything harmful in the airway. Similar mechanisms apply to pathogens in other tracts for example the GI tract. If located in the stomach the body may expel the irritant via vomiting (emesis)- if in the small and large intestines diarrhoea is used for expulsion.

One thing to remember is that these physiological responses aren’t perfect and often have side-effects. Coughing excessively can cause chronic damage or inflammation of the airways and may trigger or exacerbate asthmatic episodes. Vomiting and diarrhoea lead to loss of fluid and electrolytes (e.g. potassium/ sodium). For patients with intractable or severe diarrhoea and/or vomiting e.g. with cholera, supplements containing electrolytes and fluids need to be given to prevent dehydration and electrolyte imbalance which in extreme cases can be fatal. Thus, innate immune responses can cause severe complications. Some diseases and infections can also intentionally turn these physiological mechanisms on to try and weaken the body to make it more susceptible to infection.

Different bacteria have certain conditions that they thrive in. The human body tries to counteract this by altering the conditions of different environments within it. A key example of this is the stomach, where stomach acid (composed mainly of hydrochloric acid) creates an environment with a pH of around 2. This low pH does many helpful things (activating certain enzymes, de-activating proteins, breaking down food etc.) alongside damaging and killing most of the bacteria in the stomach.

Note: pH is a measure of how acidic or alkaline something is on a scale of 1 to 14. A pH of 7 is neutral; anything below this is acidic and anything above is alkaline. The scale is logarithmic which means a pH of 1 is a extremely strong acid and a pH of 14 is a extremely strong alkali. Stomach acid is pH 2 so that makes it a very strong acid, but when the acidity is reduced (which could be for several reasons, including H. pylori mentioned above), the stomach is less effective as a chemical barrier.

Alongside pH, the body has other chemical means to prevent infection. A molecule called IgA (immunoglobin A) which is present in tears and saliva helps to fight against pathogens and is mainly produced in mucosal membranes. For some people, a IgA deficiency can be “silent” (asymptomatic) or may lead to an increase in the number of infections they get (as well as worsening asthma etc). Other molecules and chemicals used by the innate immune system include- lysozymes, beta defensins, pepsin (also used for digestion) and as mentioned previously mucus.

This barrier consists of the body’s normal flora (bacteria that normally reside in certain parts of the body). This is protective as firstly; commensal bacteria in certain locations outcompete pathogenic bacteria for nutrients/resources (including space) preventing an infection from taking hold. Secondly, normal flora can also produce antimicrobial chemicals and synthesise certain nutrients and vitamins that the body needs (e.g. vitamin K, vitamin B12 in the gut).

This is great until the normal flora moves to another location where it shouldn’t be or the composition of the flora is modified to diet or immune strength. In this case the commensal flora may become pathogenic. There are a few reasons bacteria can move out of place e.g. loss of skin integrity, poor dental work, when antibiotics deplete competitors (see a note on commensals).

What if the pathogen gets through?

Image: The cells of the Innate Immune system. Note the macrophages, dendritic cells and neutrophils responsible for phagocytosis (the engulfing and breakdown of foreign cells). Natural killer cells have roles as part of both the innate and adaptive immune systems

Public Domain Source [Fred the Oysteri] The source code of this SVG is valid. This vector image was created with Adobe Illustrator. [https://upload.wikimedia.org/wikipedia/commons/4/44/Innate_Immune_cells.svg]

Phagocytes will recognise, bind to and then destroy pathogens by invaginating the microbes and destroying them via oxygen dependent or oxygen independent pathways. The main phagocytes are macrophages, monocytes and neutrophils.

Microbes are recognised by pathogen-associated molecular patterns (PAMPs) that are composed of carbohydrates, lipids, nucleic acids and proteins. The phagocytes will have pathogen recognition receptors (PRRs) (which are toll like receptors) on their cell surface that bind to the PAMPs so they can recognise and destroy the bacteria. 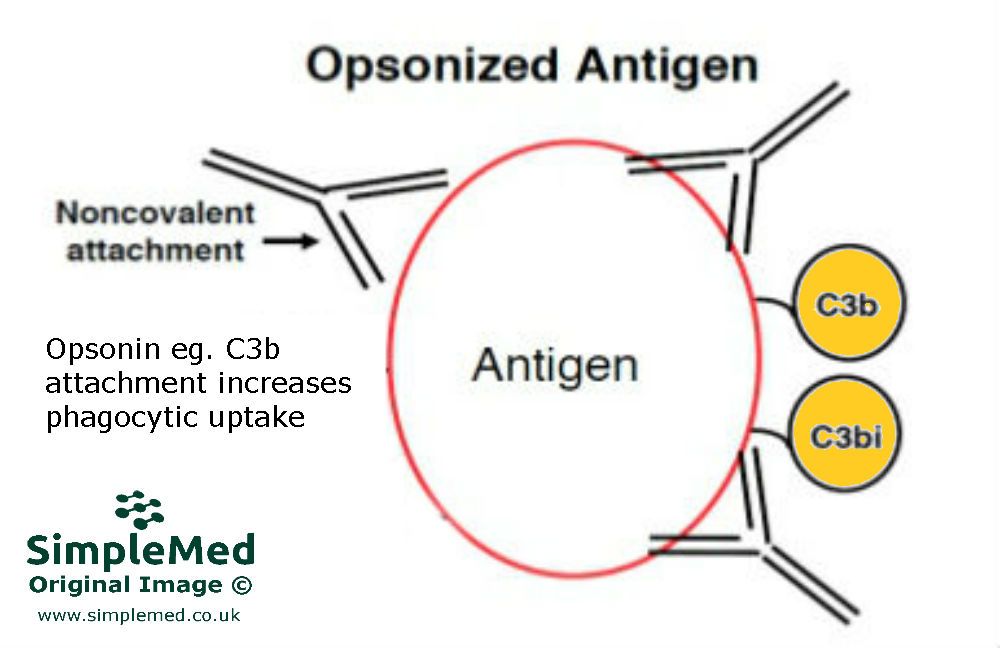 Image: Opsonins binding the surface of the antigen that has been identified as non-self, making the antigen-bearing pathogen more "attractive" for phagocytes to phagocytose

A process called opsonisation (literally, to "make tasty") can help phagocytosis. Substances called opsonins bind to the surface of the pathogen and help enhance attachment to the microbes. The secondary process they carry out is to cause “clumping together” of microbes to make it easier for the phagocytes to destroy them all in one. Examples of opsonins include C3b (from the complement pathway), IgG (an antibody), C-reactive protein (CRP) and mannose-binding lectin (MBL) (acute phase proteins). These opsonins are essential for clearing encapsulated bacteria from the body as they are poorly immunogenic.

The complement system is very handily named as it does exactly as it says – it works alongside the immune system to help give it a boost. It consists of about 20 serum protein, the most important of which are:

There are three pathways that activate the complement system:

All three pathways reach the same goal – activating the lytic pathway, which can damage the plasma membrane of some cells and bacteria. 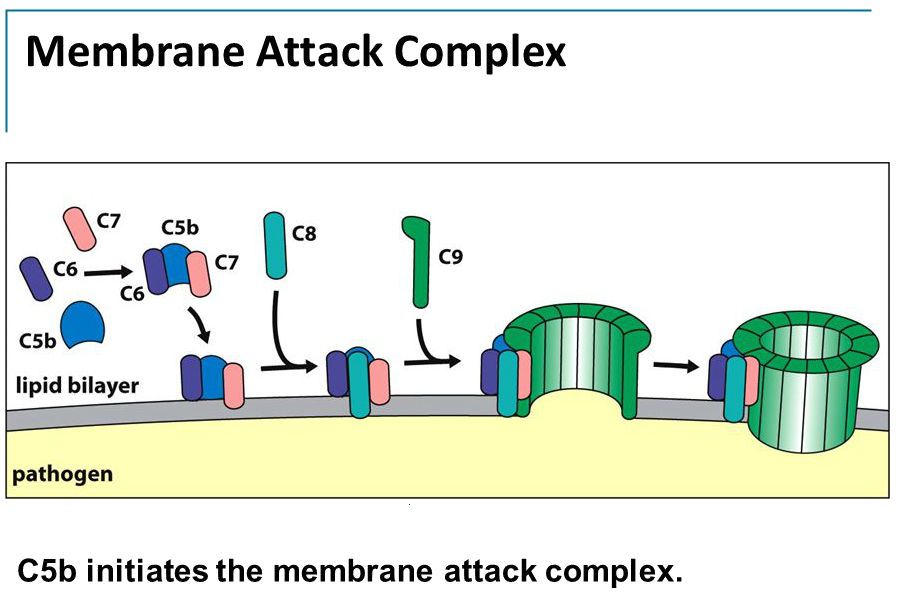 Diagram: The membrane attack complex forms in the membranes of pathogens - complement proteins come together to form a pore in the membrane, allowing water to flow into the cell, causing the cell to swell and die

Tumour necrosis factor alpha (TNF-α) is the main cytokine used for triggering the inflammatory response and leads to increased permeability of the blood vessel. This allows more fluid to move into the tissues from the blood vessels, and with that fluid more immunoglobins and phagocytes etc. TNF- α is produced by macrophages and other inflammatory cells. Along with increasing permeability, it also activates T-cells, B-cells and immunoglobin production (adaptive immune response).

Interleukins, such as interleukin 1 (IL-1) and interleukin 6 (IL-6) are another type of very important cytokines. IL-1 is produced mainly by macrophages and is responsible for T-cell and B-cell activation (and proliferation). IL-6 is also produced by macrophages and monocytes. Not only does IL-6 stimulate B-cell activation but it also functions as a hepatocyte-stimulating factor, which causes an increase in the production of acute phase reactants (increasing the inflammatory response and further recruitment of more immune molecules). IL-6 also plays a role in stimulating haematopoiesis as well.

These cytokines have combined actions:

This all works wonderfully. Problems, however, start to arise when phagocytosis has been reduced due to: