Next Lesson - Pathogenesis of Neoplasms

Any nucleated cell has the potential to form a neoplasm - an abnormal growth of cells that persists after the stimulus is removed. This happens through accumulation of genetic alterations that change the appearance and behaviour of the cell. Tumours are any clinically detectable lump or swelling, and can be defined as either neoplastic or non-neoplastic.

This type of tumour is non-invasive and remains confined to its site of origin. They tend to be encapsulated by a thin layer of connective tissue, and often have a pushing outer margin making them well circumscribed. Under the microscope the cells are typically well differentiated and resemble the tissue from which it originates. 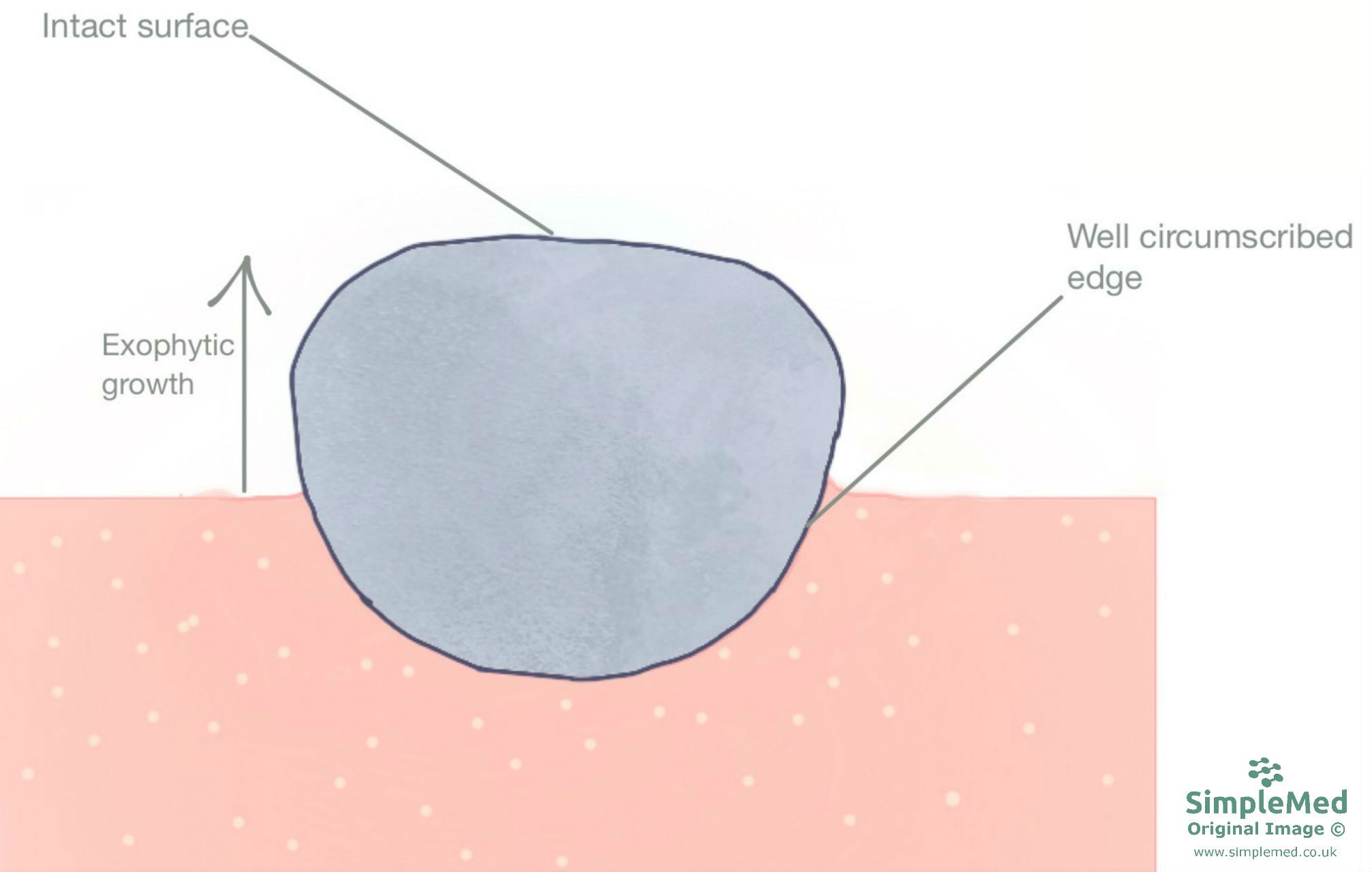 Diagram - The growth of a benign neoplasm. It is regular and well circumscribed 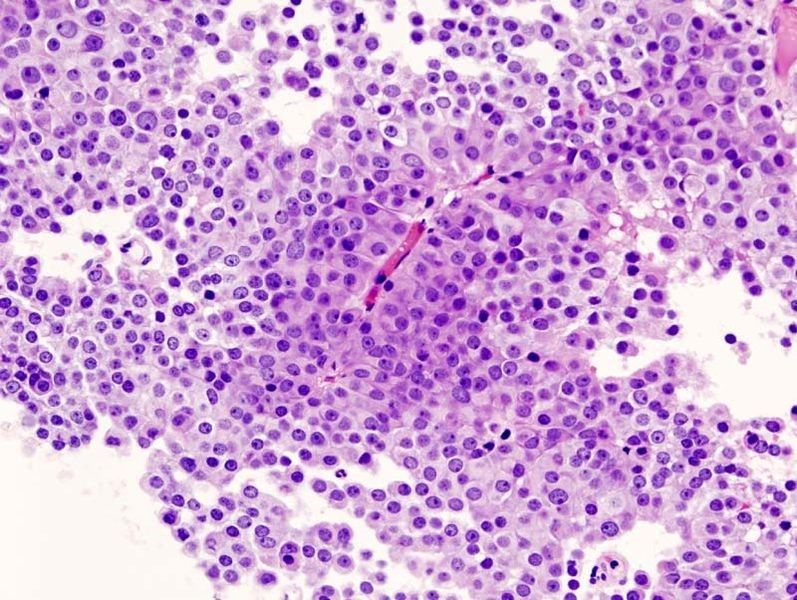 Image - A benign neoplasm under the microscope. The cells show nuclear changes, but still resemble the original tissue

The ability to invade surrounding tissues and spread to different sites (metastasise) are key defining factors of malignant neoplasms. They are typically fast growing and will therefore have irregular edges, no clear margin and can be invading into the surrounding tissues. This type of neoplasm often has central necrosis due to inadequate perfusion when it outgrows its blood supply.

Under the microscope, the cells don’t resemble the tissue from which it originated. Atypical nuclei are often present; these changes include enlargement, hyperchromasia (dark staining), presence of mitotic figures, chromatin clumping, and variability in size and shape (pleomorphism). There are often many mitotic figures present due to the fast rate of cell replication. 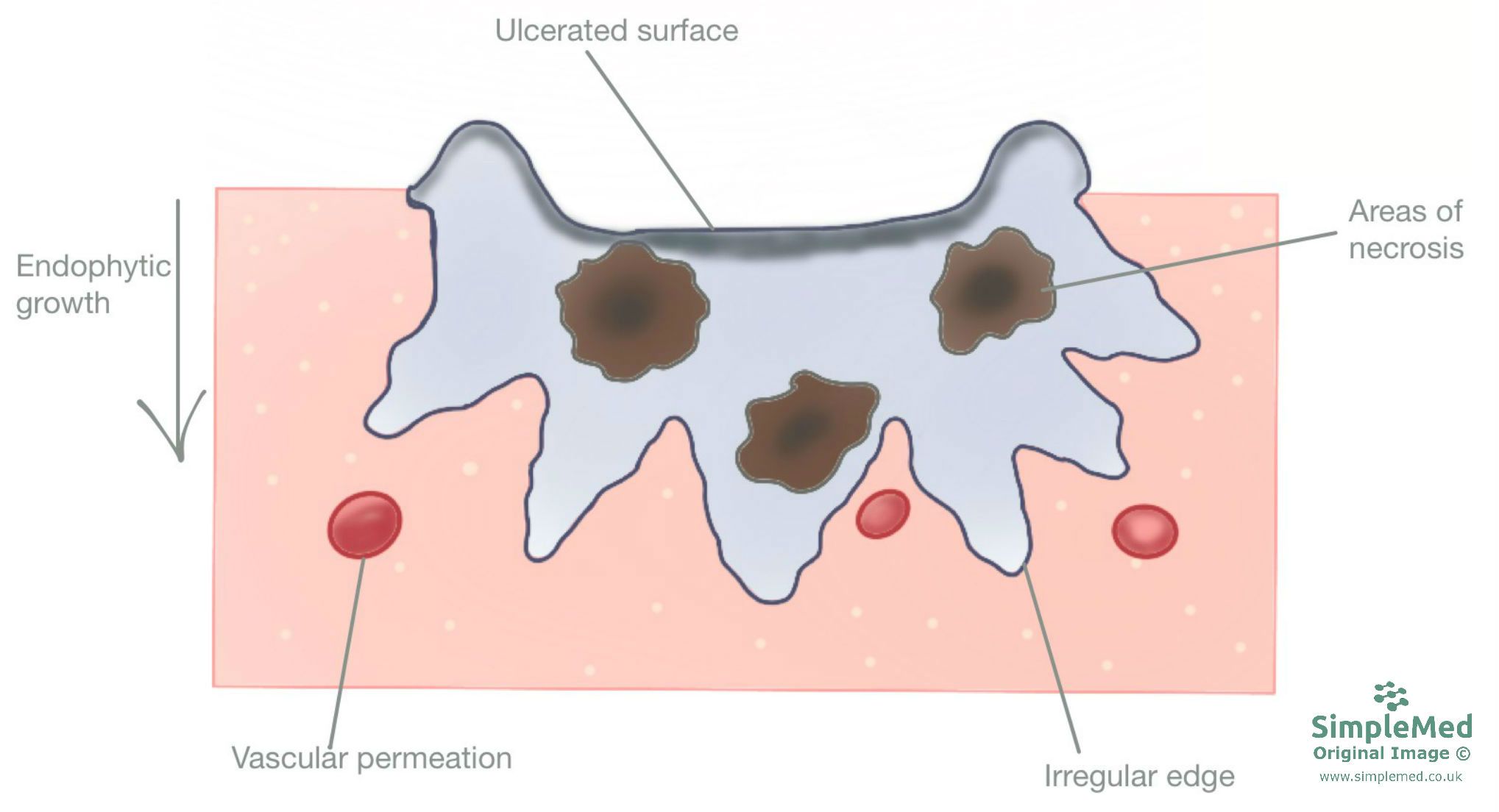 Diagram - The growth of a malignant neoplasm. It is invading into the surrounding tissues, giving it an irregular edge. The tumour is growing fast, resulting in ulceration and areas of necrosis 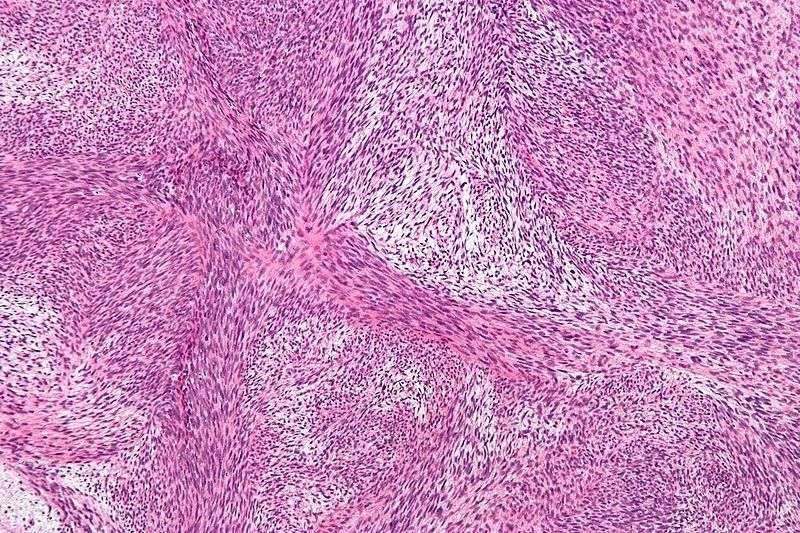 Image - A malignant neoplasm under the microscope. The cells look abnormal and the tumour doesn't resemble any tissue

The naming of tumours often depends on the origin tissue, and whether the tumour is benign or malignant. 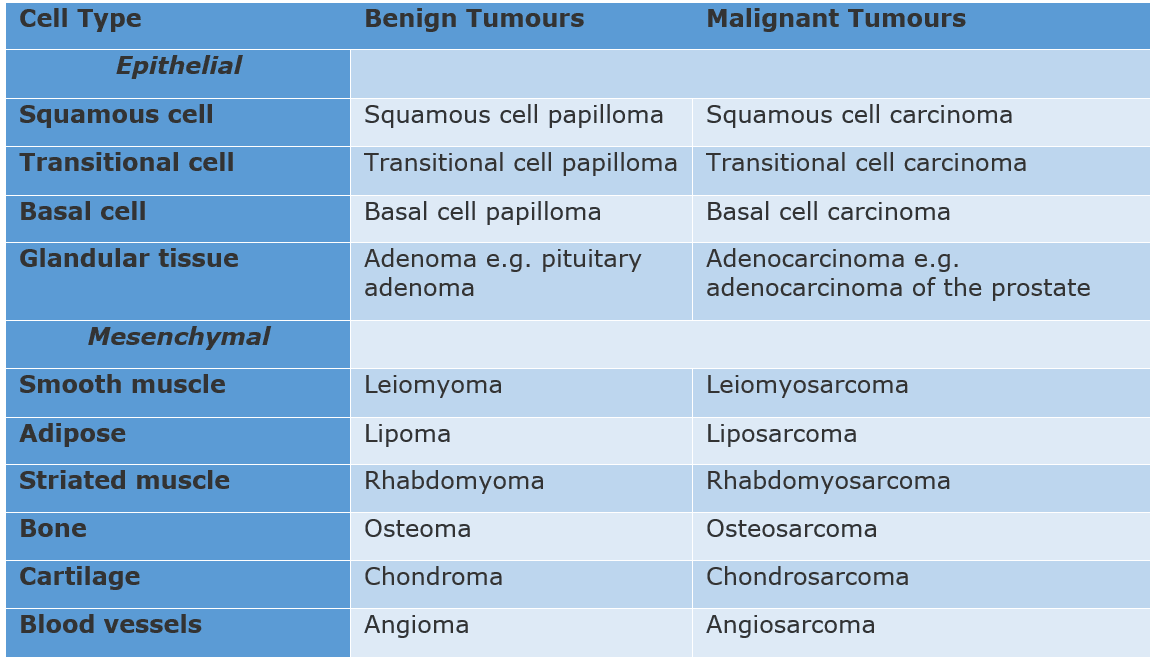 Despite these rules of nomenclature, there are some tumours which don’t follow them. These tumours are often named after a person.

A carcinoma in-situ refers to a collection of neoplastic epithelial cells that have not yet invaded through the basement membrane, therefore, it can’t access routes of metastasis such as lymphatics and blood vessels. If a carcinoma is detected at this point (for example as part of a screening programme) it can be completely excised and the patient is almost guaranteed to be cured.

An invasive carcinoma is one that has broken through the basement membrane. This means it can metastasise. 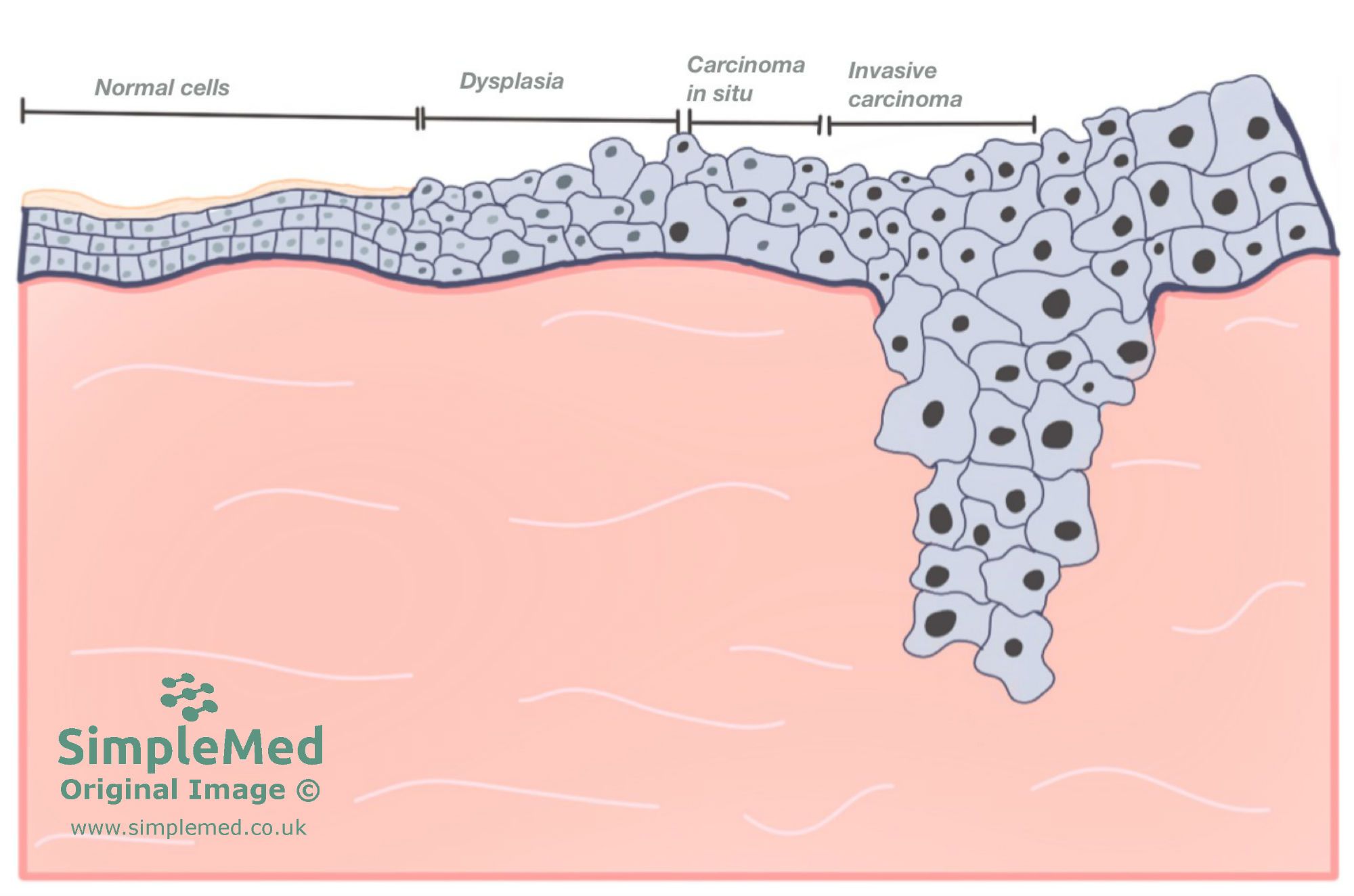 Staging and Grading of Tumours

Staging and grading allows measurement of the overall burden of a tumour, and therefore the prognosis. The higher the grade or stage then the worse the prognosis.

Grading is used to determine the behaviour of the malignancy from histological features of the tissue. Generally, tumours are graded 1-4 with 1 being well-differentiated (low grade) and 4 being undifferentiated (high grade). Higher grade tumours tend to grow rapidly and spread faster than lower grade tumours.

Tumour grade is determined by:

The stage of a tumour is determined by the size of the primary tumour and extent of metastasis. 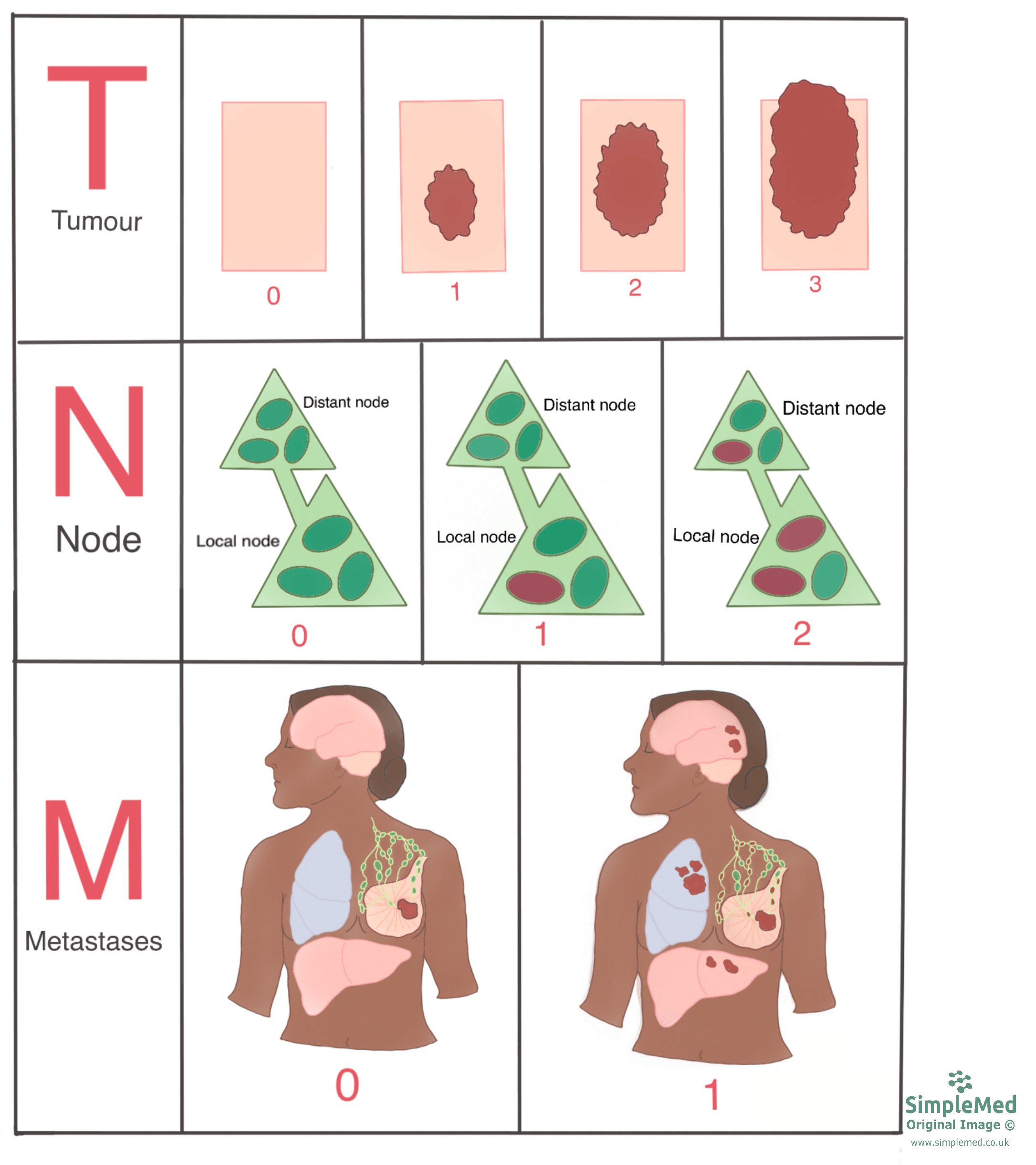 Diagram - TNM staging. For example, if a patient has a large primary tumour, local lymph node metastasis and no organ metastasis, their staging would be written as T3N1M0

The aim of cancer screening is to identify individuals with the disease in early stages or those most at risk. It allows them to start treatment early to get the best outcomes possible.

In the UK there are screening programmes for cervical, breast and colorectal cancer.

This screening programme is offered to women aged 25 to 64 years, and they are invited to smear appointments every three years until the age of 49, then every 5 years after. Cells are taken from the cervix and are used to detect Cervical Intraepithelial Neoplasia (CIN), which is dysplasia of the cells of the cervix that can progress to cervical squamous cell carcinoma. Screening can also be used to test for human papilloma virus (HPV) which is the main cause of cervical cancer.

This screening programme is offered to women aged 47 to 73, and they are invited for an appointment every three years. It involves having a mammogram, an x-ray of the breasts, to detect changes such as asymmetrical densities or calcifications that may indicate cancer. Any abnormalities can be assessed with more imaging, biopsy and fine needle aspiration.

This screening programme is offered to men and women aged 60 to 74 years. Every two years they are sent a home test to collect a stool sample. This is then tested for occult blood (not visible blood) which may indicate cancer. If blood is found, then the person is invited for a colonoscopy to see if there are any colorectal adenomas or malignancies.