Proteins need be sent to the correct organelle within the cell or sometimes need to be exported out of the cell into the extracellular space to carry out their function. To make sure the proteins arrive at the correct destination, the polypeptide will have a molecular label (specific amino acid sequence) that will ensure the protein is delivered to a specific location. Within the cell itself, there are various systems that help to deliver the proteins, produced in the process of translation, to reach their end terminus.

Proteins Targeted to a Cell Organelle

Proteins that are destined for organelles (e.g. the nucleus, mitochondria, peroxisomes) or the cytosol are firstly produced in the cytoplasm then delivered to the relative destination. 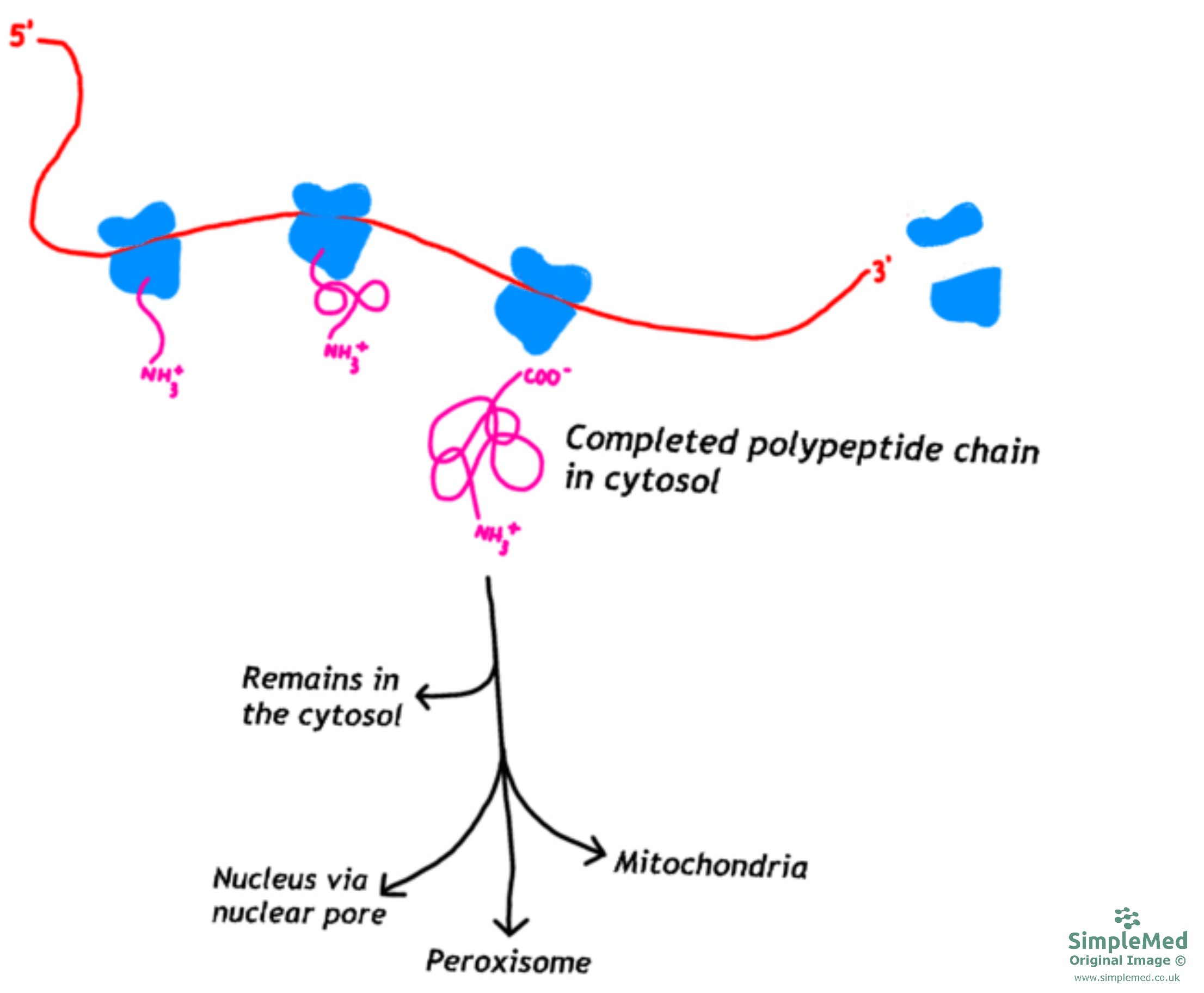 Diagram - The pathway for proteins targeted for organelles or the cytosol

Proteins Targeted to the Nucleus

The nucleus has many proteins that are involved in the biological processes that the nucleus undertakes, however, all the proteins found in the nucleus are produced in the cytoplasm, so they need to be transported to the nucleus.

For the proteins to enter the nucleus, they have pass through a protein channel in the nuclear membrane called a nuclear pore. Proteins targeted for the nucleus will contain a nuclear localisation sequence (NLS), which is a run of 4-8 basic amino acids in the primary sequence of the the polypeptide chain.

Proteins destined for the mitochondria are produced in the cytoplasm in an unfolded state, with the address label being an amphipathic sequence made up of 10-80 amino acids found at the N-terminal. The unfolded protein is stabilised by interacting with molecular chaperons in the cytoplasm.

When the protein has crossed the inner mitochondrial membrane, an enzyme called mitochondrial processing peptidase will remove the signal sequence from the protein. The protein will then fold into its conformation in a process requiring chaperone proteins and energy. 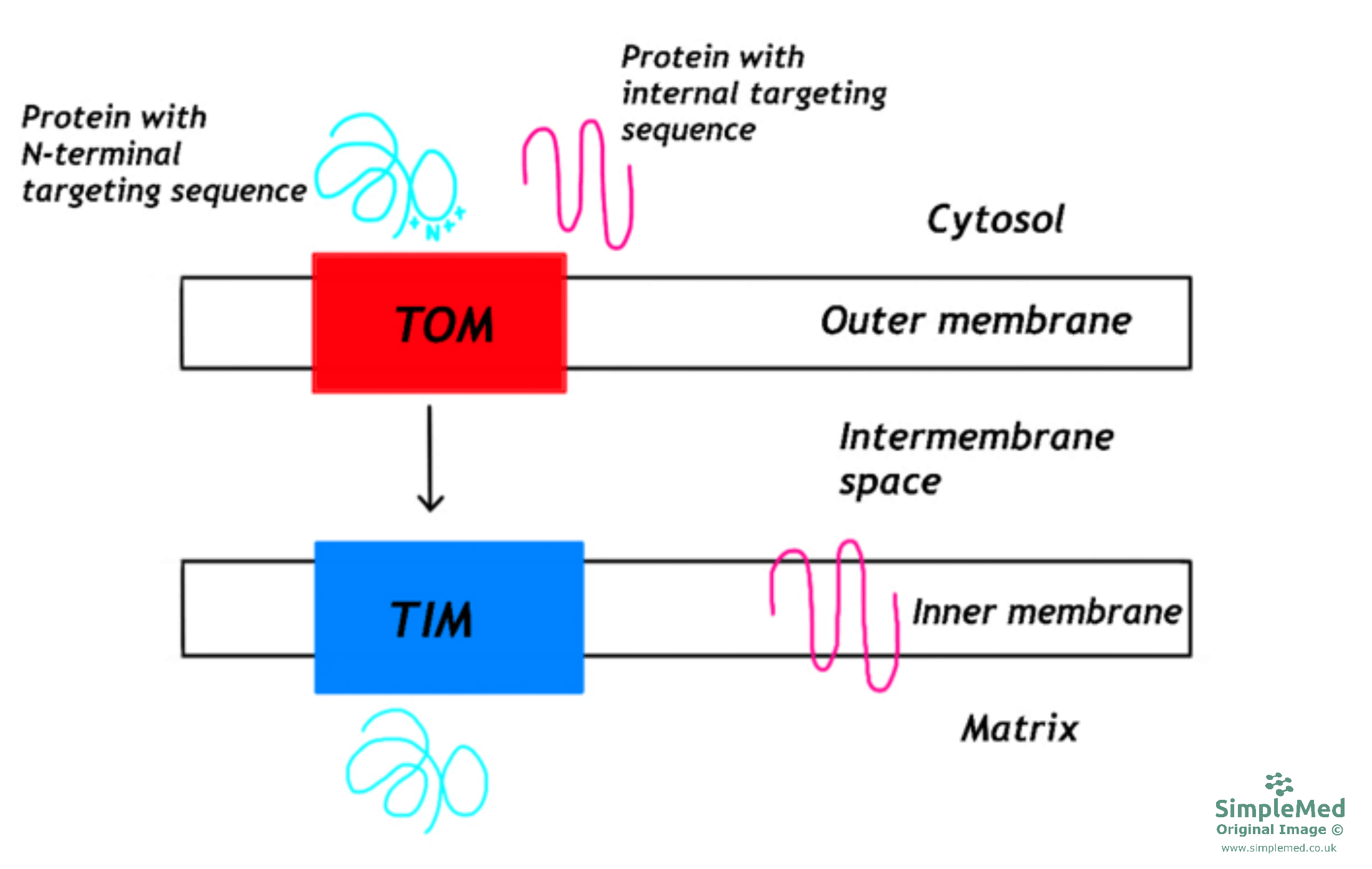 Diagram - The pathway for proteins targeted for mitochondria

Peroxisomes have a role in the cell by metabolising lipids and detoxifying chemical molecules.

Proteins Targeted to the Endoplasmic Reticulum and Secretory Pathway

When a protein is intended for any part of the endomembrane system (endoplasmic reticulum, Golgi apparatus, lysosome and plasma membrane) or secretion out of the cell, the polypeptide is firstly taken to the endoplasmic reticulum (ER) during translation. 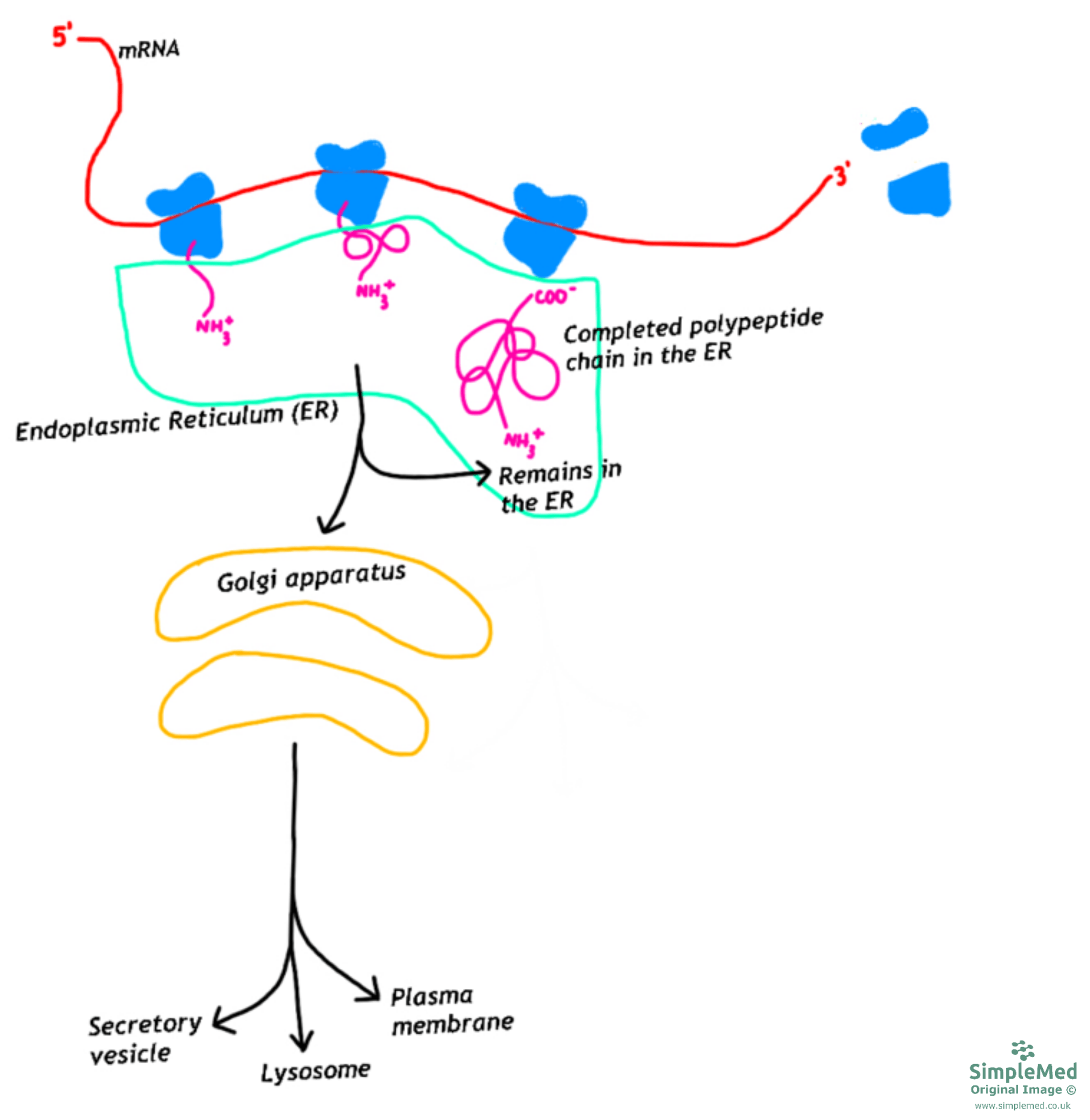 For a protein to be transported to the ER, the polypeptide chain must have a signal sequence, which is a run of hydrophobic amino acids found at the N-terminal of the chain.

For those proteins destined for the plasma membrane, the signal sequence or another region of hydrophobic amino acids will cause the protein to be embedded in the ER membrane and anchors the protein in the membrane to hold it there.

Proteins destined for lysosomes will be modified in the Golgi by the addition of a mannose-6-phosphate group to the N-terminus of the polypeptide chain, and this process indirectly requires ATP. Proteins only receive the addition of the mannose-6-phosphate group if they contain a signal patch; this is a series of specific amino acids from various parts of polypeptide chain that give the protein a specific three-dimensional folded structure. 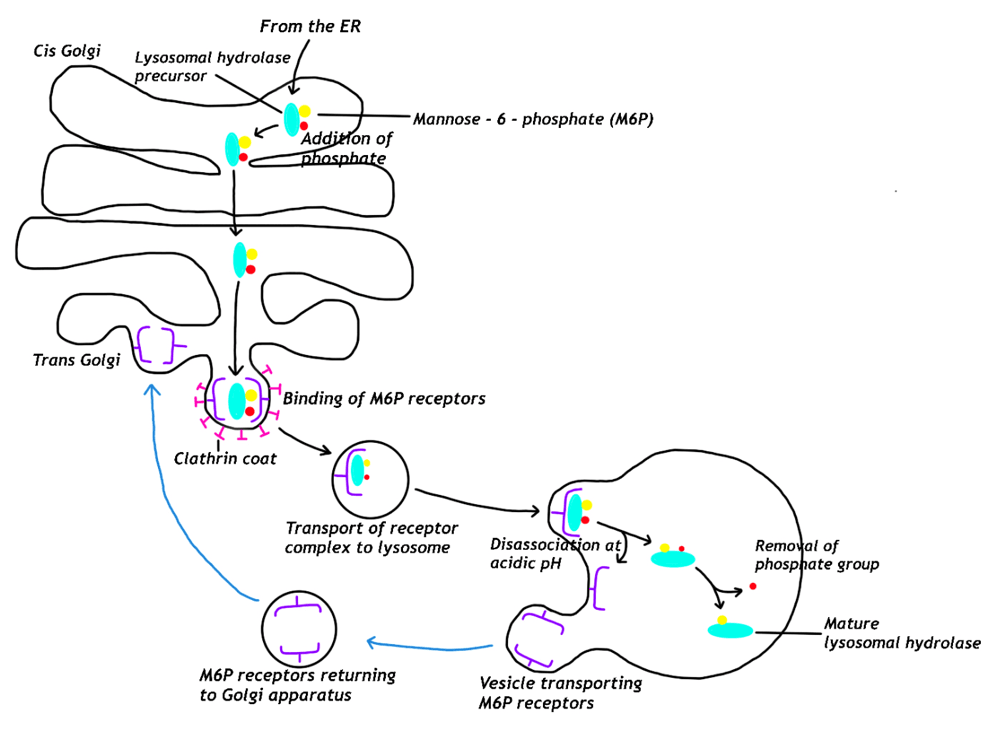 Proteins That Remain in the Endoplasmic Reticulum

Some proteins have a function that is involved with the mechanisms and processes that take place in the ER. These protein will contains signal sequence at the C-terminal of the polypeptide chain. This signal is a sequence of four amino acids, which is Lysine-Aspartate-Glutamate-Leucine (KDEL).

Proteins Targeted to the Plasma Membrane and Secretion