Next Lesson - The Sacral Plexus

This article is closely associated with the article on the Sacral Plexus, as both the lumbar and sacral plexuses supply peripheral nerve innervation to the lower limb.

The lumbar plexus is a convergence of spinal nerves that occurs lateral to the lumbar spine. It includes input from five spinal nerves (T12 [thoracic nerve 12], L1 [lumbar nerve 1], L2, L3 and L4) and has six peripheral nerve outputs (iliohypogastric, ilioinguinal, genitofemoral, lateral cutaneous nerve of the thigh [referred to in this article for brevity as lateral cutaneous nerve], obturator, and femoral).

Each of these peripheral nerves will be discussed individually throughout the article.

A mnemonic can be useful when trying to remember the order of the nerves in the lumbar plexus:

‘I, I Get Leftovers On Fridays’ is a very common one that is listed at this point, but I find it a lot more useful to go down a more interesting route with the ‘Incredible Imogen Gets Laid On Fridays’. 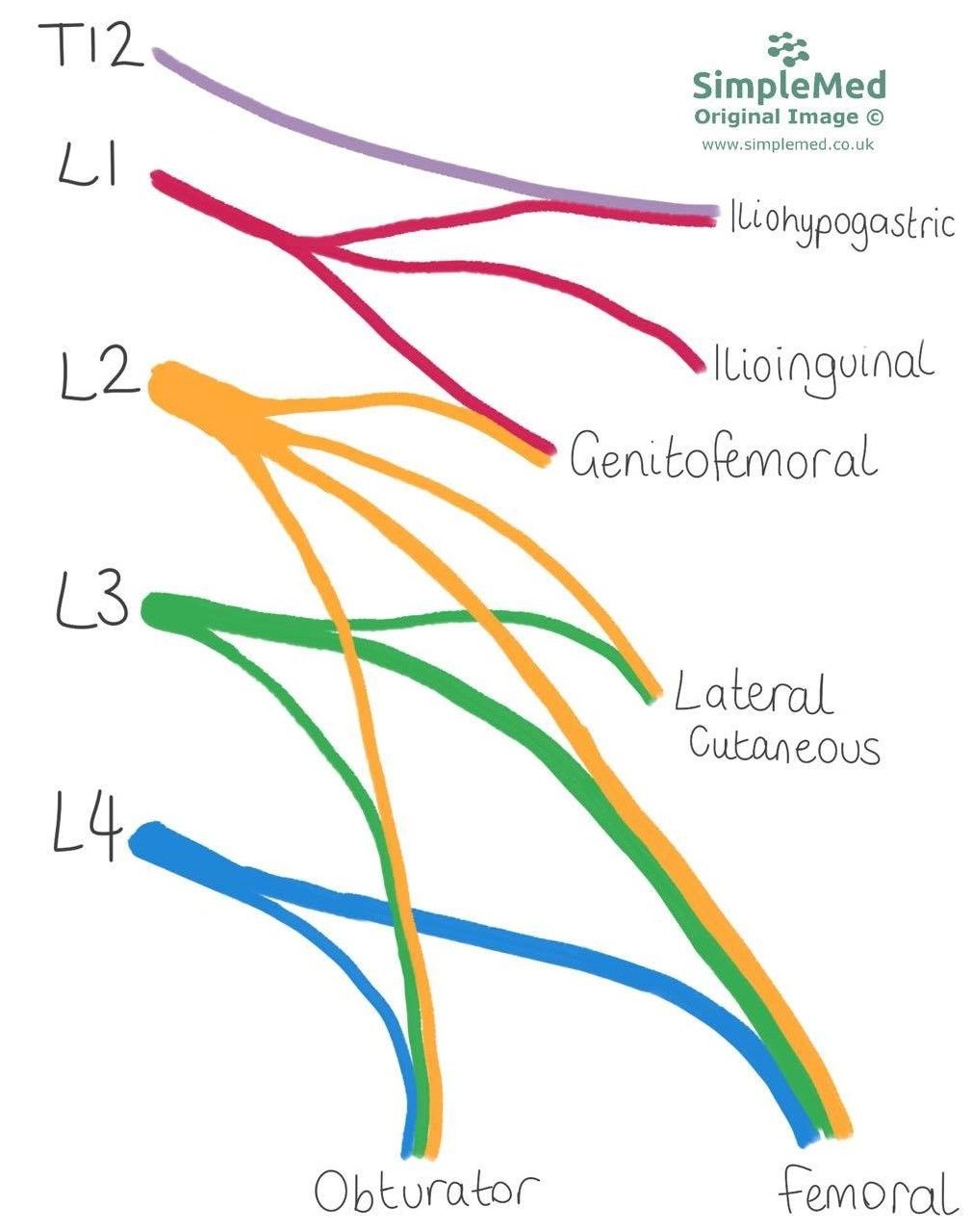 Peripheral Nerves of the Lumbar Plexus

The iliohypogastric nerve is the first branch of the lumbar plexus.

Its path runs from the lumbar plexus (just lateral to the lumbar spine) to the iliac crest, running posterior to the kidneys.

It has contributions from two spinal nerves: T12 and L1.

Its motor functions include the internal oblique and transverse abdominus muscles.

Its sensory functions include the lateral gluteal region (lateral hip joint area) and the suprapubic area.

A tip for remembering that iliohypogastric comes before ilioinguinal is that H comes before I in the alphabet.

The ilioinguinal nerve is the second branch of the lumbar plexus.

It follows the same path as the iliohypogastric nerve, and after the abdominal wall, it passes through the superficial inguinal ring.

It has contributions of one spinal nerve: L1.

Its motor functions include the internal oblique and transverse abdominus muscles.

Its sensory functions include the superior anteromedial thigh and either the anterior scrotum or the labia majora.

The genitofemoral nerve is the third branch of the lumbar plexus.

It passes inferiorly out of the lumbar plexus, penetrating the psoas major muscle, and continuing downwards.

It has contributions from two spinal nerves: L1 and L2.

Its sensory functions include the superior medial thigh (referenced above in relation to the cremasteric reflex) and the anterior scrotum or labia majora.

Lateral Cutaneous Nerve of the Thigh

The lateral cutaneous nerve is the fourth branch of the lumbar plexus.

It enters the thigh at the lateral side of the inguinal ligament.

It has contributions from two spinal nerves: L2 and L3.

This nerve has no motor functions.

Its sensory functions include the anterior and lateral thigh.

The obturator nerve is the fifth branch of the lumbar plexus. This is the case even though it is shown in the diagram above as the sixth branch as it follows a path parallel to the midline, making it difficult to show it as the fifth branch.

It emerges from the medial wall of the psoas major muscle, traveling with the common iliac artery to the obturator canal.

It has contributions from three spinal nerves: L2, L3, and L4.

It innervates multiple muscles supplying the medial compartment of the thigh, meaning it is primarily responsible for adduction of the thigh. It supplies the three adductor muscles (longus, brevis and magnus), as well as gracilis and obturator externus.

Its sensory function includes the middle part of the medial thigh. This small section is between the superior portion of thigh innervated by the genitofemoral nerve and the inferior portion which is supplied by the femoral nerve.

The femoral nerve is the sixth and final branch of the lumbar plexus.

The femoral nerve has contributions from three spinal nerves: L2, L3, and L4.

The motor functions of the femoral nerve include muscles of the anterior thigh: this means it supplies the hip flexors (pectineus, iliacus, sartorius) and the knee extenders (the quadriceps femoris – rectus femoris, vastus lateralis, vastus medialis and vastus intermedius).

The sensory functions of the femoral nerve are dependent on the branch:

Damage to the Lumbosacral Plexuses

Damage to the lumbar or sacral plexuses (or both) can be very serious and are suspected when the symptoms shown cannot be localised to a single peripheral nerve region.

Damage can present with neuropathic pains, numbness, weakness or wasting of muscles.

One of the main causes is diabetic amyotrophy, also known as lumbosacral radiculoplexus neuropathy. It occurs when the nerves are damaged by high levels of blood sugar. High dose corticosteroids may be useful in treatment to reduce the inflammation surrounding the nerves and ease symptoms.

Another cause is local invasions, such as tumours. Unfortunately, the only treatment for this is surgery to remove the obstruction, but this can be dangerous as there is a high risk of further damage to nerves occurring.