Understand the investigative techniques used to diagnose a patient's infection and identify the causative micro-organism.

When a patient presents with an infection, it can often be difficult to tell the exact organism they are infected with from clinical signs and history alone. Many symptoms are common among many micro-organisms and thus investigations need to be carried out to confirm a diagnosis and begin targeted treatment.

This article covers a handful of diagnostic investigations that can be requested by a doctor to help with specific diagnosis of an infection. Some of these tests can be used for diagnosing other diseases that are not infectious in cause, but this is not within the scope of this article. Details of the methods of carrying out these investigations are not required past this level for medical students, but accurate interpretation of their results is vital.

A gram stain involves looking at the shape and staining of a bacterial species under a microscope after carrying out a gram stain (using crystal violet and safranin).

Gram staining differentiates bacteria by the chemical and physical properties of their cell walls through detecting peptidoglycan, which is present in the cell wall of gram-positive bacteria.

To understand gram staining, an understanding of the different shapes and components of the cell walls of bacteria is required.

The gram stain is almost always the first step in the preliminary identification of a bacterial organism. While gram staining is a valuable diagnostic tool in both clinical and research settings, not all bacteria can be definitively classified by this technique.

How is it done?

There are 4 basic steps to performing a gram-stain:

Bacterial shapes can be either:

Image: The 3 shapes of bacteria. Note that cocci can arrange into singular cocci, diplococci (pairs of cocci) and larger groups such as strips and bunches

The arrangement of the bacteria within space is also important. For example:

This information can be very useful in distinguishing between different species that may appear similar on a gram stain. 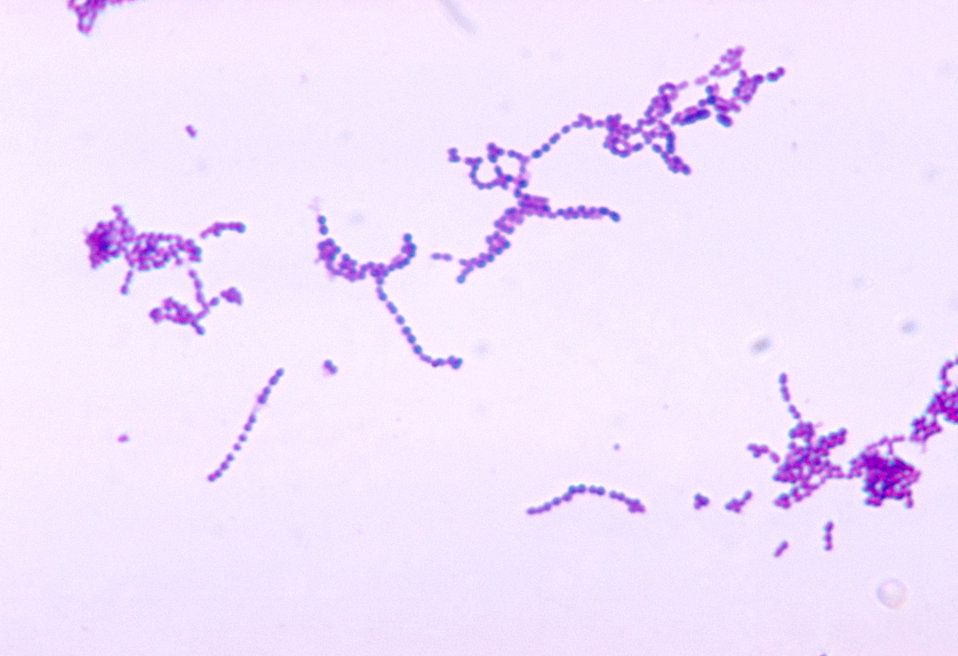 Figure: Gram Stain of a Streptococcus species. Notice the long chains of cocci ("strips") and purple colouring as all streptococci are gram positive 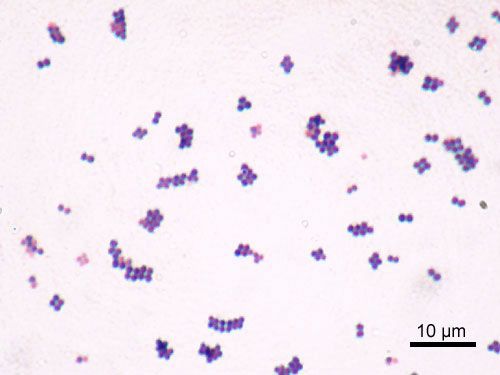 Figure: Gram Stain of a Staphylococcus species. Notice the bunches of cocci.

There are two main categories of bacteria:

Bacterial cell wall compositions vary based upon the category of bacteria:

Diagram: A Gram-positive bacterial cell wall with its main components 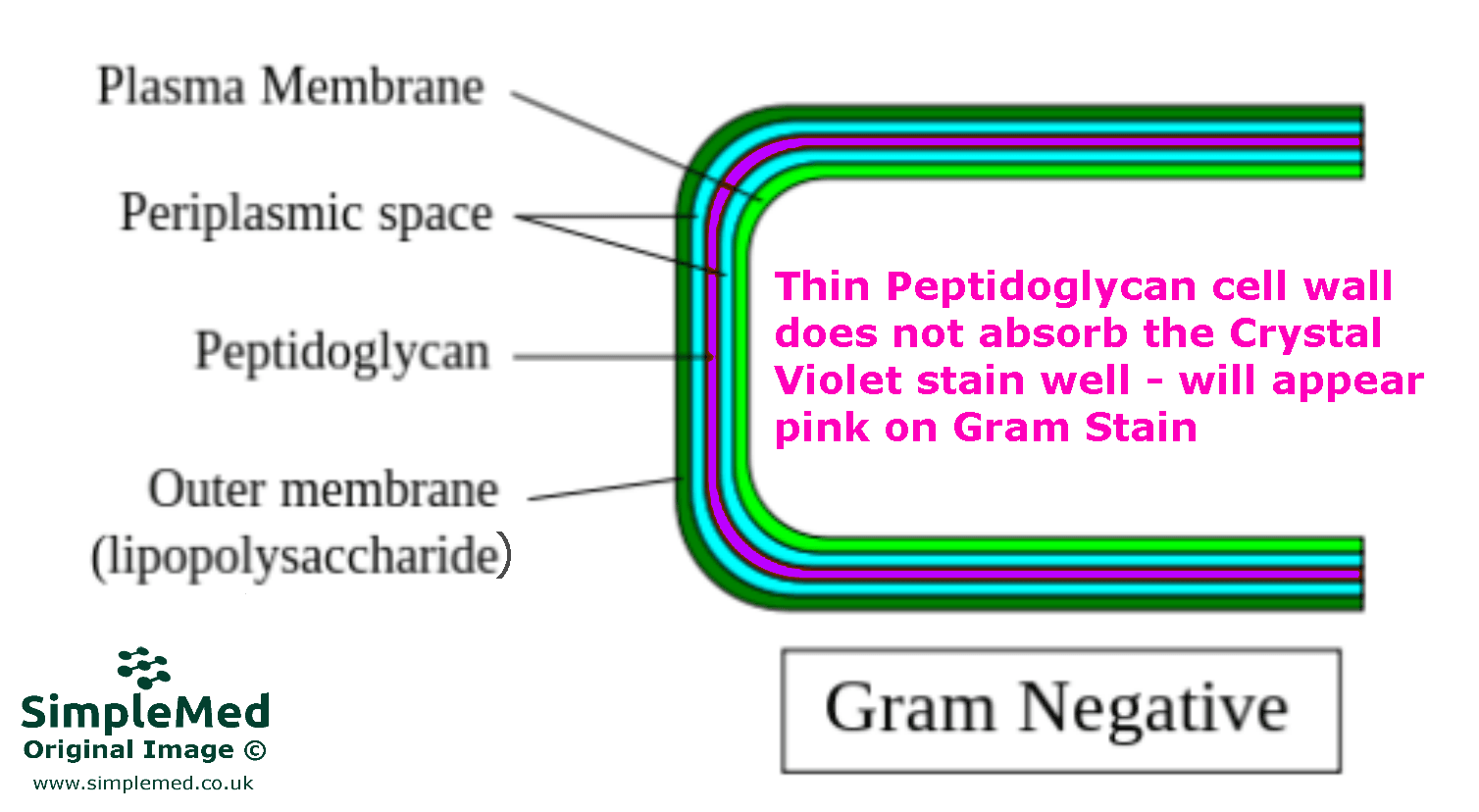 Diagram: A Gram-negative bacterial cell wall with its main components. Note the LPS outer capsule that causes serious disease and is a virulence factor

To reiterate; interpretation is carried out by analysing the colour and shape of the bacteria on the microscope slide.

Peptidoglycan absorbs the crystal violet stain used in gram stains. As such:

As previously discussed, the shape of a bacterium can be either cocci, bacillus or spiral.

Converting this information into a diagnosis

Upon knowing the colour and shape of a bacterium the current differentials can be supported or rejected. This is why knowledge of the shape and gram of common species of bacterium is important for a physician
Here are some useful examples:

Often treated with: Penicillins and Carbapenems

Often treated with: Cephalosporins and fluoroquinolones

Often treated with: Cephalosporins and fluoroquinolones

Definition: Serology refers to the study of serum (blood plasma without clotting factors) but in this context is used specifically to refer to diagnostic techniques within this field of study.

Used for: All types of infections and other non-infective conditions e.g. rheumatological conditions.

Used to detect: Bacteraemia (bacteria present in the bloodstream)/Syphilis/Hepatitis/HIV

Serological tests rely on the formation of antibodies in response to an infection (against a given microorganism). Presence of these antibodies in the blood implies that the body has begun to mount an immune response (which may be ineffective) against the organism. This diagnostic test is not suitable in immunocompromised individuals as they may lack the ability to form antibodies.

There are several serology techniques that can be used depending on the antibodies being studied. These include: ELISA, agglutination, precipitation, complement-fixation, fluorescent antibodies and chemiluminescence to name but a few examples (detailed knowledge of these tests is not required for this topic).

Definition: A very common test carried out on the patient’s blood to detect the levels and characteristics of certain benchmark cells within the blood. Anomalies in the number of red blood cells, their size and the number of immune cells/inflammatory markers etc. can be indicative of a disease. This investigation is not inherently diagnostic but can often show if a patient is infected and what cells are being affected within the blood.

Used for: All types of infections

A full blood count is almost always requested when a patient comes in acutely ill. It provides information such as:

See our dedicated article in the haematology section

Definition: Polymerase chain reaction (PCR) is a technique that is used to amplify trace amounts of DNA (and in some instances, RNA) located in or on almost any liquid or surface where DNA strands may be deposited. Thus, a sample of fluid or blood taken from an infected patient can be passed through a PCR machine to amplify the specific DNA/RNA strands of certain viruses/bacteria that the technician is looking for. The amplified genetic information can then be used to match the sample with a microorganism on record.

Used for: Every infection and organism – the gold standard of infection investigations

Used to detect: Everything

A PCR test is diagnostically the most accurate form of investigation commonly carried out, as it can detect the exact DNA of a certain microorganism within a sample and can be automated (reducing human error). It can even detect specific mutations that could cause resistance to certain medications. This allows further personalisation of treatment strategy to increase treatment efficacy.

PCR tests are powerful tools; however, they take considerable time to carry out and are far more expensive to run than a gram stain or basic serology. They can however, be used in viral infections to detect the specific infective organism.

Definition: As the name implies this technique is simply culturing a blood sample (the growing any bacteria found within the blood on a plate). It is used to detect infections have haematogenous spread (through the blood stream). This is possible as the bloodstream is usually a sterile environment; therefore any positive culture indicates pathology. The technique can be used to grow large enough amounts of the bacteria from within a patient’s bloodstream to carry out tests such as antibiotic susceptibility (to identify the best antibiotic to treat that strain of the bacteria).

The bacteria are given an ideal growth environment on agar jelly. This allows rapid growth and detection of any bacteria within the blood. MIC (minimum inhibitory concentration) and susceptibility testing can then be carried out on the bacteria. This test is often paired with a gram-stain test, allowing for an excellent and full diagnosis of the infection present within the patient.

It is worth remembering that all these techniques do take time, therefore in acute emergency situations such as Sepsis empirical treatment must be given. Therefore, it is also useful to understand the most likely causative bacteria for infection in specific patient groups.