Beliefs of the Public

Most chronic illnesses are disabling in some way, but they do not always cause the patient to become disabled. Disability is a complex and personal topic to many and this article only attempts to explore some of the established models on the subject.

There are 2 key models of disability:

The social model acknowledges the role of disabling environments; an individual is only seen as being disabled as a result of the demands of the environment. For example, dyslexia is only seen as a learning difficulty in a society that values the ability to read, write or spell.

There are pros and cons of both models and the best approach likely lies somewhere between the two.

The ICIDH has been superseded by the ICF (international classification of functioning, disability and health). This is as the ICIDH implied definite progression from each definition to the next i.e. impairment will lead to disability which will lead to handicap. The ICIDH’s use of the term handicap is also seen by some as problematic and outdated.

Each of the 3 component is roughly analogous to the previous ICIDH definitions respectively but act to describe the individual as well as their environment rather than boxing individuals into problematic classifications.

Lay beliefs of health stem from what health means to the average person who has no medical training (the ‘lay-person’ or ‘man on the street’). Lay beliefs can be socially embedded and can influence behaviour regarding health. This can be detrimental because there can often be discrepancies between medical knowledge and lay beliefs. This can lead to varying acceptance of medical advice and can influence concordance to treatment.

Lay beliefs develop naturally as a community seeks to understand health conditions. This is further hampered by the fact that medical concepts can sometimes be difficult to understand, and lay beliefs can exist as a simplified although possibly distorted version.

There are three important behaviours that patients may partake in:

Illness behaviour can be affected by many things, because it involves the patient admitting the problem and seeking health, which can be difficult for some patients. It therefore depends on the following things:

There are three main categories that patients may fall into with regards to concordance to treatment:

Health promotion is the process of enabling people to increase control over and improve their own health. There are five different parts of it:

PROMs can be generic (for any patient population) or disease specific (for a particular condition); unidimensional (focussed on symptoms) or multidimensional (global health related quality of life).

PROMs are important because they assess:

Clinical trials often use PROMs as part of their structure. This is because they provide quantifiable data which is clinically meaningful so can help with monitoring progression of a condition and efficacy of treatment. They can also be used to monitor adherence, assess adverse effects and calculate QALYs (see our article on healthcare economics) by providing information on survival and adverse effects.

When evaluating PROMs to use, certain characteristics must be considered:

There are three levels of prevention that can be put into place to help prevent adverse effects on health:

These interventions prevent the onset of disease by reducing exposure to risk factors. This can be done by four main methods:

These interventions aim to detect and treat a disease (or the risk factors) at an early stage to prevent future complications. Examples include: screening programs for cervical cancer and monitoring and treating hypertension.

These interventions aim to minimise the effects of established disease. Examples include: giving steroids to treat asthma and giving renal transplants in renal failure.

A screening program is a form of secondary prevention that acts to detect early stages of a disease in order to treat it before it becomes an issue. It must have many qualities to become a nationwide screening program in Britain, which are based on the Wilson-Jungner Criteria:

There are a number of types of screening programs:

Screening tests are indicative of the risk of the person has of having the disease. They are not diagnostic.

True Positive – individuals with a disease who receive a positive screening test result. This means that it indicates they have a high chance of having the disease, and so are referred for further testing. This is good because it means that the people with the disease are caught early, diagnosed and treated.

However, it is possible to get results out of the screening test that are incorrect.

False Positive – healthy people getting a positive screening test result. This means the test indicated they have a high chance of having the disease, but they don’t in reality and are referred for further testing. The result of this is expensive and possibly harmful further testing that reveals they are healthy.

False Negatives – diseased people getting a negative screening test result. This means the test indicated they have a low chance of having the disease, but they really do have it, and are not referred for further screening. The result of this is a patient with the early stages of a disease not being diagnosed, so they are left to go on and develop the disease. This causes a delay in diagnosis and may lead the patient coming to harm from the worse outcomes from the more progressed disease 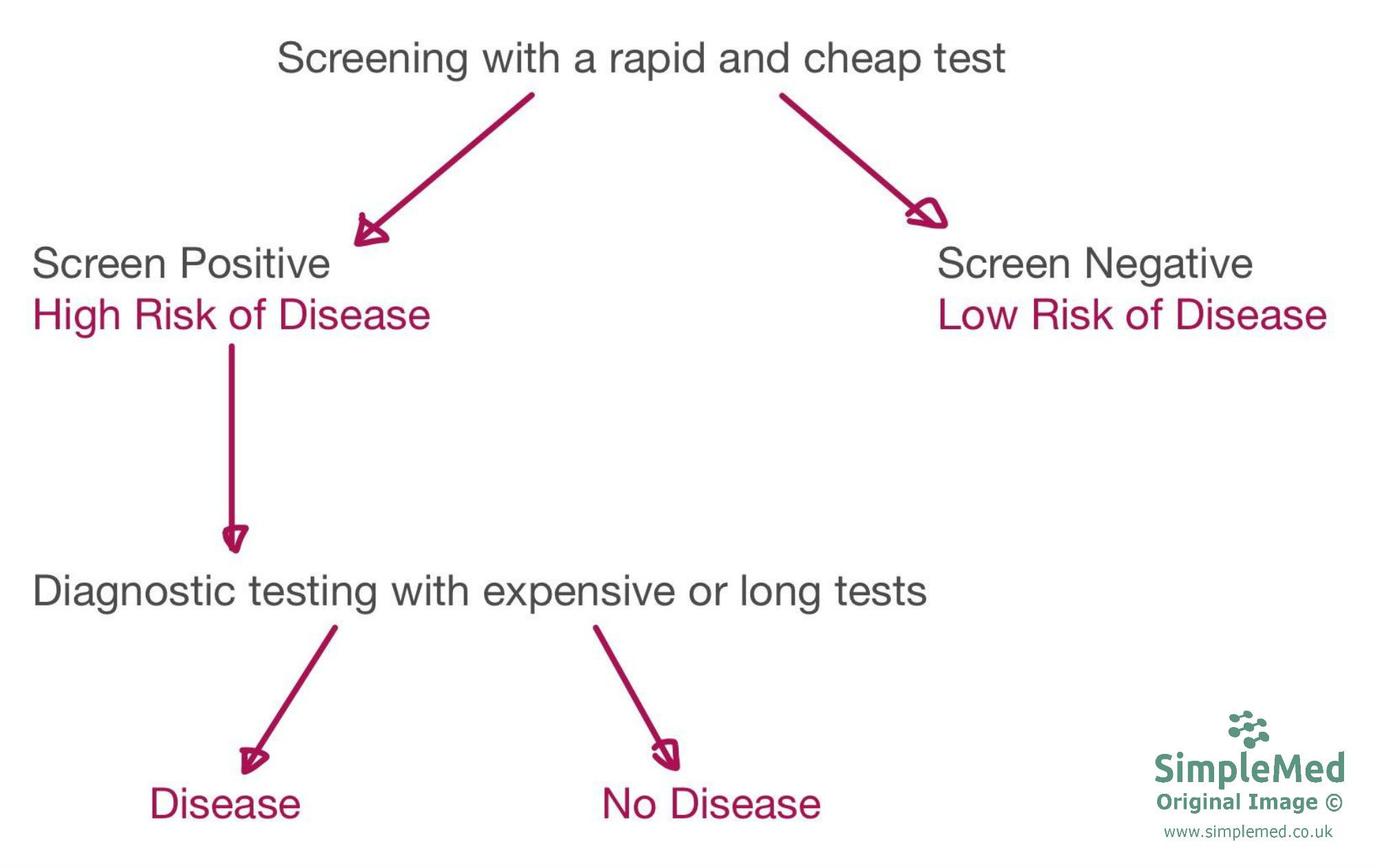 Diagram - The process a patient will go through if they have a screening test performed in secondary prevention. A screening test shows the likelihood of the person having the disease, and is not a complete diagnostic test. It is still important to remember that patients who screen negative could still have the disease, they are just not investigated any further

There are several key terms regarding screening tests that relate to the values shown in the table above.

Sensitivity – proportion of people with the disease who test positive (number of true positives).

Specificity – proportion of people without the disease who test negative (true negatives).

It is important to remember that when the test is applied in the exact same way to a different population, specificity and sensitivity will stay the same because they are features of the test and not of the population.

Positive Predictive Value (PPV) – probability that someone who tested positive actually has the disease.

Negative Predictive Value (NPV) – probability that someone who tested negative is actually healthy.

Screening programs can be difficult to evaluate because they have a number of intrinsic biases.

The early diagnosis caused by screening programs can falsely appear to prolong the survival.
For example; a patient once developing this condition will die within 10 years regardless of intervention. When not screened the patient presents 8 years after initially developing the condition which is now in its late stages and has been noticed by its symptoms. As a result the survival of the patient is 2 years post diagnosis.

This means that it appears that screening adds 3 years to survival when infact the patient dies at the same time and simply is diagnosed earlier.

Screening programs can cause otherwise benign conditions that would not cause harm in the long term to be picked up. This means that potentially harmful, painful and expensive treatment may be given to the patient that would not have been needed if the harmless disease state hadn’t been picked up by screening. This is true of prostate cancer which a large proportion of elderly men die with rather than die from. Treatment in all of these cases would of course be unsuitable as it would only cause preventable expenditure and most importantly preventable suffering.

Those members of the public who attend screenings could also be the ones who are likely to do other thing protective to their health, makin the disease less likely in this patient to begin with.