Blood Supply of the Head and Neck

The brain could be considered to be the most important structure within the head and neck region. It requires 0.75–1L of blood every minute, and can consume between 20-50% of the oxygen in blood (depending on brain activity). This means that the arterial supply to the head and neck, and the subsequent venous drainage, needs to be able to handle a large volume of blood effectively.

It is important to remember that the vascular system in the human body is, for the most part, symmetrical – there is a left and a right vessel unless otherwise stated. There are also some normal anatomical variants e.g. not every individual may have bifurcation of the common carotid artery at the level of C4, it may occur at C3 or C5.

There are some abbreviations of vessel names used in this article:

Blood travelling to the brain begins in the heart. This oxygenated blood travels towards the head via the common carotid and vertebral arteries.

The ECA is the major blood supply to the extra-cranial structures of the head and neck (i.e. things on the outside of the skull). The eight branches it gives off can be remembered by the following mnemonic and are shown on the image below.

Table - Mnemonic for the branches of the external carotid artery 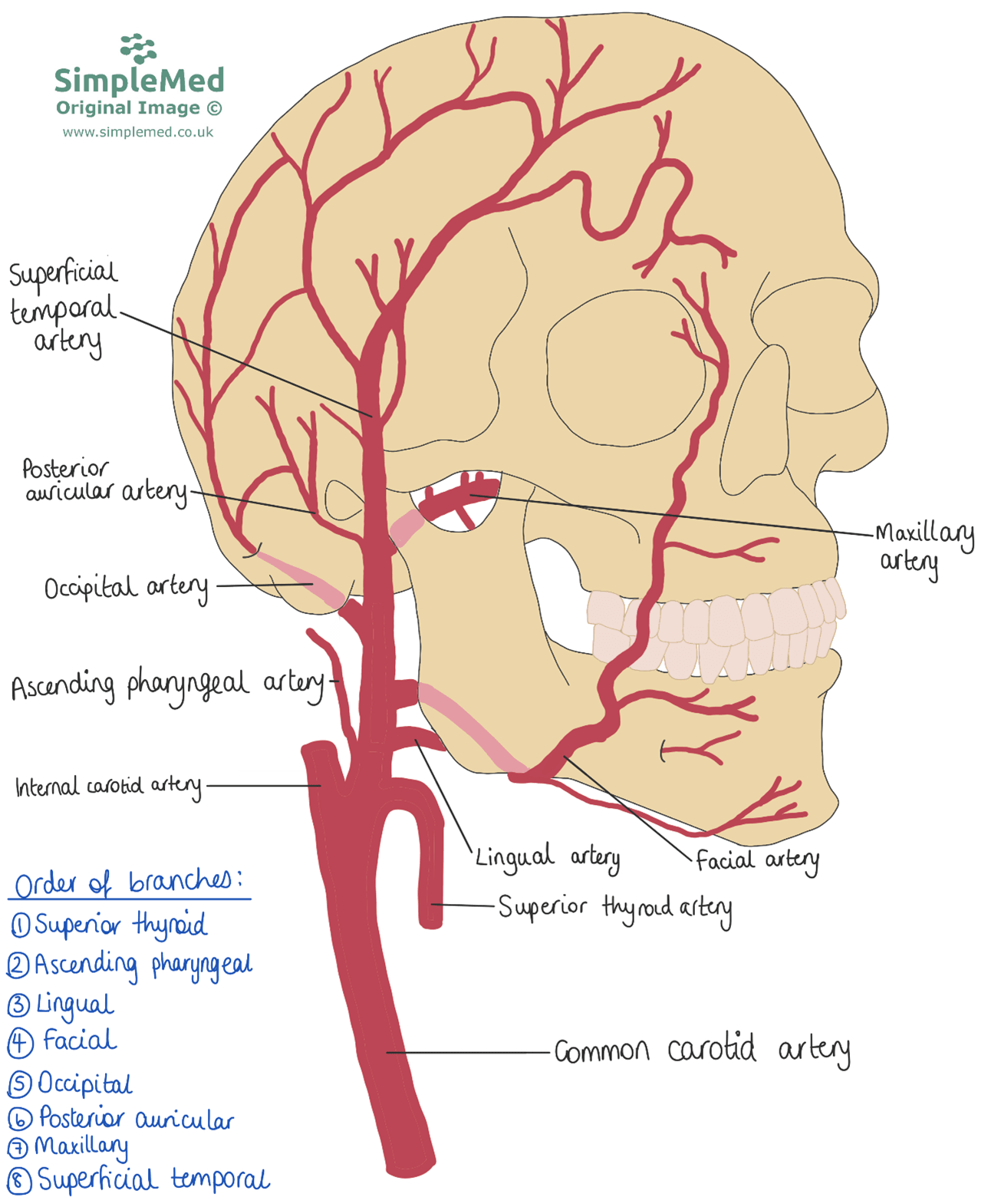 The maxillary and superficial temporal arteries are the terminal branches of the ECA, meaning this is where the ECA is said to end, and arise high up in the parotid gland.

The important branches of the maxillary artery are:

The superficial temporal artery is pulsatile just anterior to the ear.

The ECA does not supply the front of the skull nor the forehand – this is where the ICA contributes. Once inside the skull, it gives rise to the ophthalmic artery which runs into the orbit and then it itself gives rise to the supraorbital and supratrochlear arteries which then join the other branches of the ECA.

Inside the skull, there are dural folds that exist on the sagittal plane (posterior to anterior – separates the two hemispheres of the brain) and on the transverse plane (left to right – cups the base of the brain). Within these dural folds, between the periosteal and meningeal layers of dura, exist spaces called dural venous sinuses, which are spaces through which venous blood flows.

The image below shows the different sinuses in the skulls relating to the dural folds and shows how they converge at the confluence of sinuses, travel round the sigmoid sinus and descends through the floor of the skull to become the internal jugular veins. This vein joins the carotid sheath to travel through the neck. 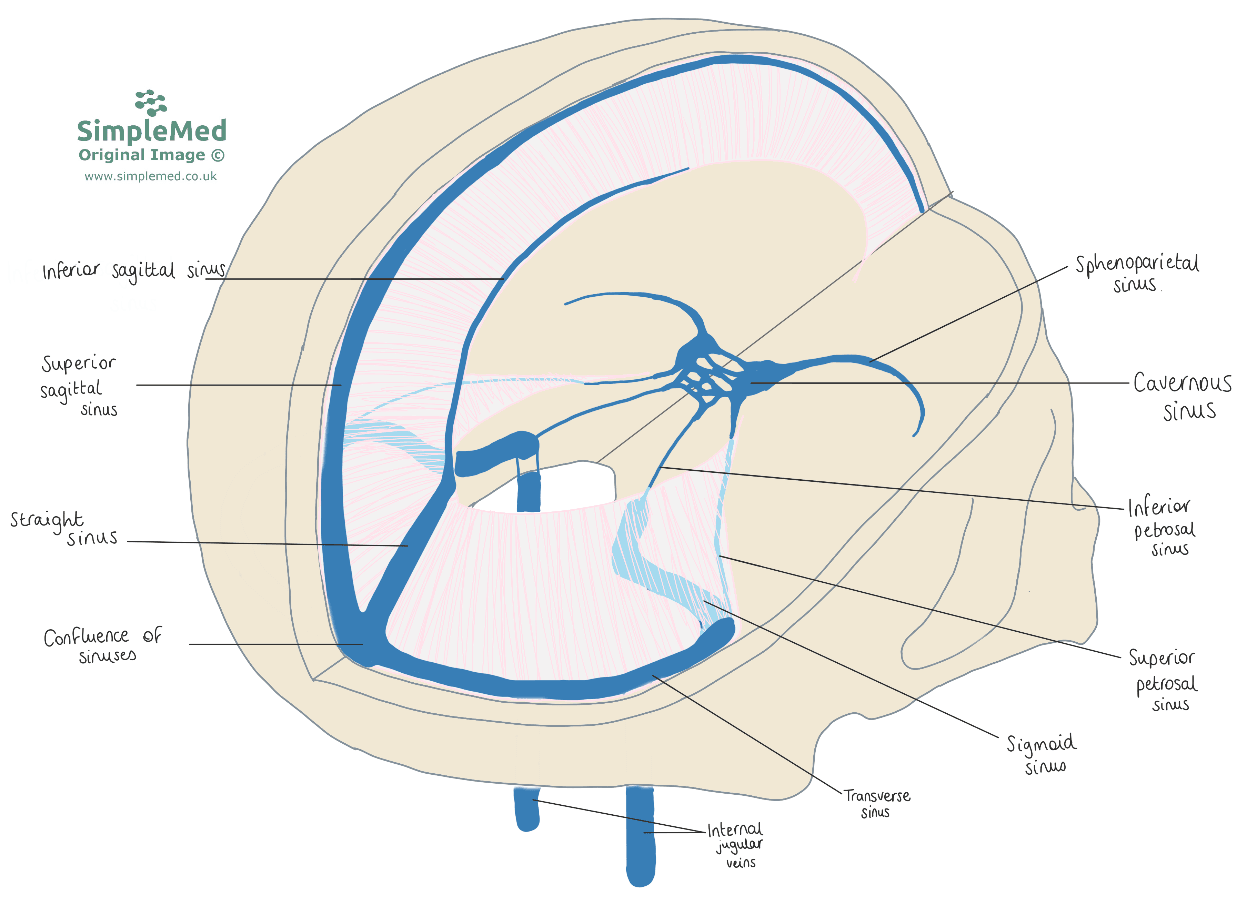 Both the left and the right IJVs descend down the neck and join with the subclavian veins to form the brachiocephalic veins (which then go on to form the superior vena cava).

As the IJV descends, it receives blood from a number of different vessels. These vessels include:

Learning the path of the internal jugular vein is important, as it is used on the right side to assess the jugular venous pressure (JVP), which can be used to assess the pressure of the venous return to the right atria. For more information on the JVP, see this article. 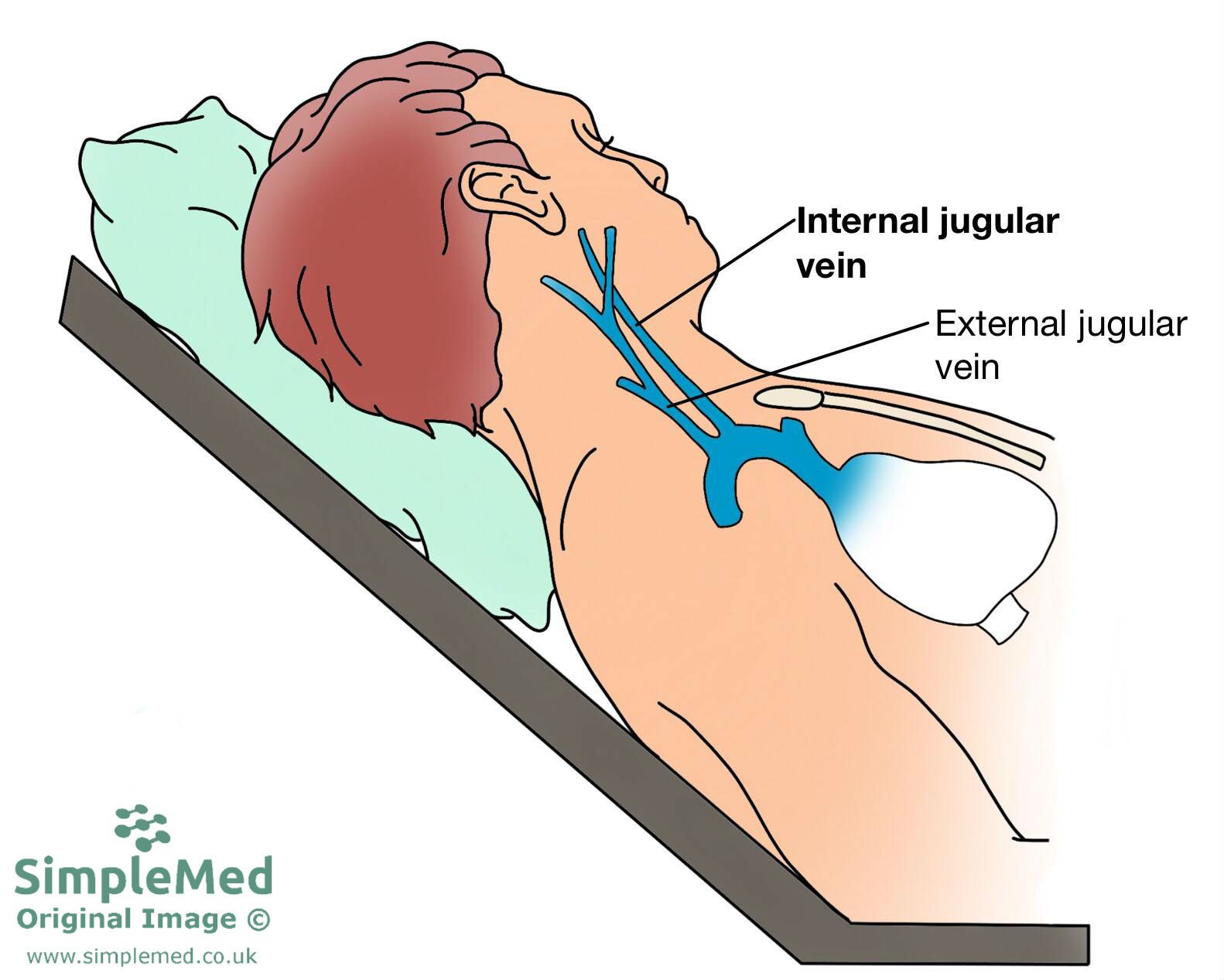 Diagram - The position for measuring the jugular venous pressure

The external jugular veins drain the scalp and face, as well as some of the deeper structures within the face. It is formed by the connection of the posterior auricular vein (draining the area of the scalp superior and posterior to the ear) and the posterior branch of the retromandibular vein (which is formed by the maxillary and superficial temporal veins and drains the face). The EJV descends down the neck and feeds into the subclavian vein.