Next Lesson - Labour and Delivery

The aim of implantation is to establish a unit of exchange between the mother and fetus by anchoring the embryo in the endometrium and creating the placenta.

Development of the Placenta

The placenta begins to form in the second week of pregnancy. It is the first structure that begins to develop, as it is needed to provide nutrients and oxygen to the growing embryo. If a healthy placenta does not form, the pregnancy cannot continue, because no fetus can grow without this supply from the placenta. In the case of a diseased placenta, or failed implantation of the placenta, miscarriage occurs. 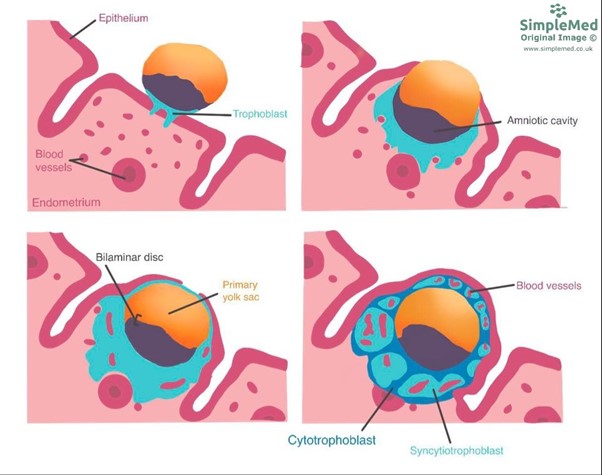 Diagram - How the embryo attaches to the endometrium. It is important to note that the trophoblast differentiates into the cytotrophoblast and the syncytiotrophoblast in the fourth image

The chorionic villi are structures within the placenta which maximise the exchange of nutrients, gases, and waste products between the mother and the fetus.

Villi are finger like projections which act to increase the surface area of a membrane to facilitate diffusion. They are found at multiple sites in the body including the small intestine.

In the placenta, the chorionic villi are the site at which substances are exchanged between mother and fetus. The villi are arranged in groups of ‘villous trees’ (so called as they look like small trees) to further increase surface area.

The villi are bathed in maternal blood supplied by spiral arteries (these are high flow, low resistance vessels). The membrane of the villi separates the maternal and fetal blood, and prevents them from mixing. Therefore the transfer of gases, nutrients, and waste products occurs across the membrane. At the start of the pregnancy, this membrane is very thick but as the pregnancy progresses it begins to thin. The cytotrophoblast layer reduces until eventually there is only a single layer of syncytiotrophoblast cells.

The adaptations of the placenta, as a result, ensure maximal diffusion as: the surface area is maximised (chorionic villi), a constant diffusion gradient is maintained (rich blood flow from endometrial vessels and fetal vessels within the villi), and the diffusion membrane is as thin as possible (single layer of syncytiotrophoblast cells). 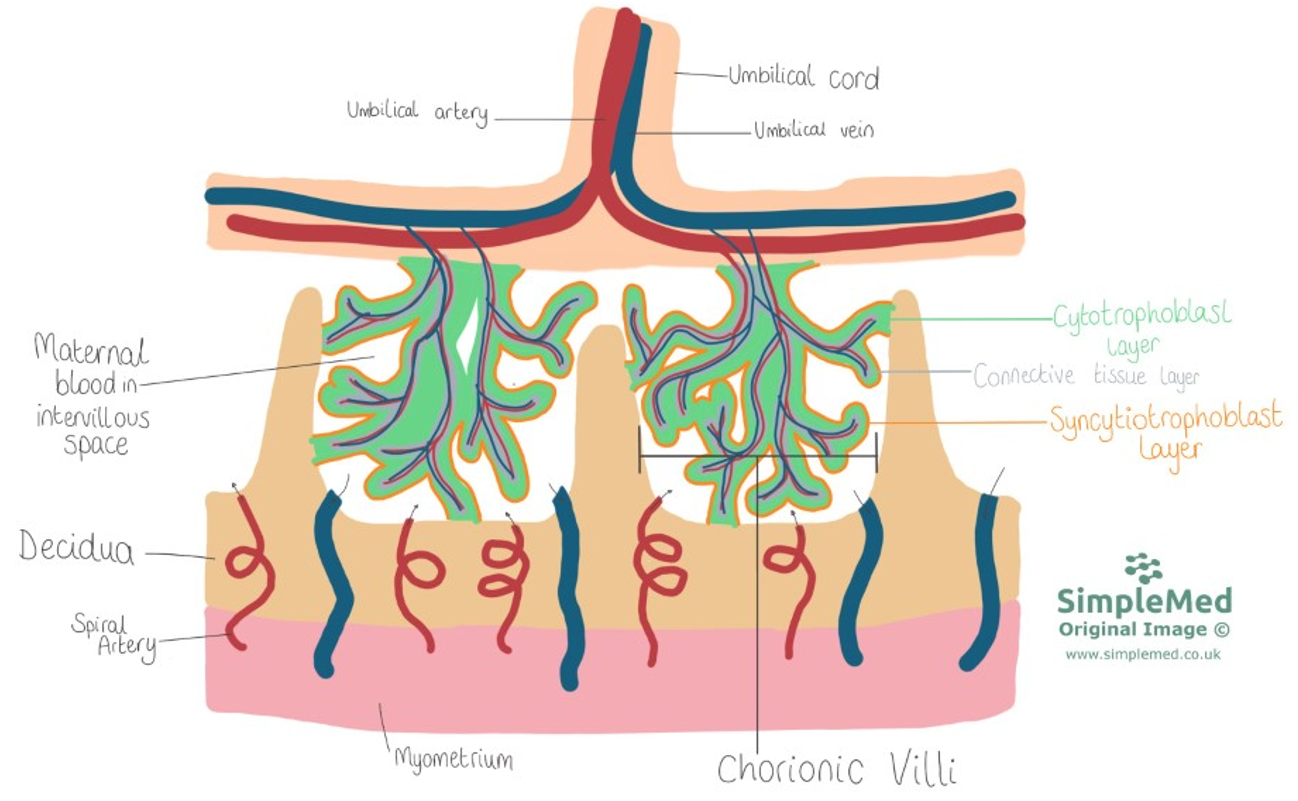 The decidua is the modified endometrium that exists during pregnancy or is lost during menstruation. The decidua (in humans) forms independently to implantation so is a normal part of the menstrual cycle.

The decidua of pregnancy modulates the degree of invasion into the endometrium that the embryo can achieve. This occurs through a process called ‘decidualisation’ and is controlled by factors that promote or inhibit this reaction.

It is important because if the embryo implants in an area where there is no decidua (e.g. in an ectopic pregnancy occurring in the fallopian tubes), there is nothing to regulate invasion and therefore no control of the depth of invasion. If implantation occurs in the correct place but the decidual reaction is not completed properly, it can lead to a range of complications where pregnancy is not maintained (e.g. causing miscarriage). Another result of the decidual reaction not occurring properly is that the invasion is not the correct depth. This can lead to conditions like pre-eclampsia or placenta accreta with too shallow or too deep invasion.

Implantation usually occurs on the superior posterior wall of the uterus. This is the best place for implantation to occur as it allows the uterus to expand with the growth of the fetus and allows for vaginal delivery. However, implantation can occur anywhere which can cause multiple problems.
If implantation occurs somewhere other than the uterine wall, this is termed an ‘ectopic pregnancy’.

If implantation occurs in the inferior portion of the endometrium, the growing placenta can block the internal os of the cervix. This means that the birth canal is blocked and that the baby cannot be born vaginally without tearing through the placenta and causing massive haemorrhage. This condition is called placenta previa (or ‘placenta first’) and is managed through delivery of the baby by Caesarean section.

Incomplete invasion of the embryo can lead to placental insufficiency. This can cause a condition called pre-eclampsia which is characterised by hypertension in the mother. It is thought to occur because the placenta is receiving an inadequate supply of blood. As a result, this is compensated for by a rise in the maternal blood pressure. This high blood pressure can have negative consequences for the mother, including kidney damage, and can progress to causing seizures in a life-threatening condition called eclampsia.

Equally, invasion of the embryo too far into the endometrium can also cause problems. This is called placenta accreta and means that it can be difficult for the placenta to detach from the uterine wall following the delivery of the fetus. This can lead to post-partum haemorrhage as the blood supply to the placenta is not cut off.

There are a number of blood vessels which contribute to the placenta. On the maternal side the vessels are the endometrial arteries and veins. Blood from these vessels spills out into blood lakes which bathe the outside of the villi in maternal blood for exchange to occur.

The Function of the Placenta

The main aim of the placenta is to support the normal growth and development of the fetus.

The placenta produces protein-based hormones such as human chorionic gonadotrophin (hCG). This hormone is only produced by the syncytiotrophoblast, and as a result is specific to pregnancy. This means that it can be analysed as a positive sign of pregnancy in urinary and serum pregnancy testing. hCG is the hormone that sustains the corpus luteum during the first trimester of pregnancy.

The placenta also produces steroid hormones when it is sufficiently mature (at the start of the second trimester). After this point, it takes over the role of the corpus luteum and produces enough oestrogen and progesterone to keep the HPG axis in a ‘pregnant state’ to prevent ovulation or menstruation.

Placental hormones have an impact on maternal metabolism. Progesterone promotes an increase in appetite to allow increased fat deposition in the mother, which helps support the later development of the fetus and breastfeeding following birth.

Other hormones such as human placental lactogen (hPL) create a diabetogenic state to cause insulin resistance in the mother. This increases the amount of glucose available in the blood to the fetus, but can play a role in the development of gestational diabetes.

Transport at the placenta occurs in a number of different ways:

The limiting factor for gas exchange in the placenta is maternal blood flow. As a result, maintaining adequate blood flow is key and even small variations in flow can cause the fetus to not receive enough oxygen which can result in fetal distress. This can occur during labour due to the mechanical pressure on the vessels.

As the immune system of the fetus is very immature, it is at risk of infection in the neonatal period after leaving the sterile uterus. However, passive immunity from antibodies transported across the placenta into the fetal circulation in utero helps reduce this risk. As a result, the fetus has some immunity against infections at birth. Only IgG immunoglobulins can be transferred across the placental membrane. This means that the baby has some temporary protection from infections that the mother has experienced as they carry the relevant IgG. However, this also means that the baby can temporarily experience autoimmune conditions of the mother if carried on IgG (e.g. systemic lupus erythematosus causing neonatal lupus in the child).

These effects are only temporary, however, as the baby is not producing these immunoglobulins themselves so after their body has broken down the IgG, no more is produced and the condition is resolved.

Teratogens have their greatest effects in early pregnancy, particularly in the embryonic stage (3-8 weeks) as this is when organ systems are starting to be formed and are at most risk of damage.

Teratogens can easily be transferred across the placenta during the pregnancy. Teratogens can be found in many drugs; illicit and pharmaceutical. As a result, extra attention should be given to the medications a pregnant woman is prescribed to prevent harm to the developing fetus. The BNF contains safety information on every medication regarding whether it can be used during pregnancy and when breast feeding.