Next Lesson - Malignancies of the Reproductive Tract

The menopause can be a difficult time for many women, because it marks a time of drastic hormonal change in the body. This brings with it many signs and symptoms which are often unwelcome.

The word ‘menopause’ comes from the Greek, and literally means ‘end of monthly cycle’. It is defined as a permanent cessation (over 12 months) of the menstrual period and occurs as part of the natural aging process in a woman.

Menopause that occurs before this time is defined as ‘premature’, which will be discussed later in this article.

Menopause occurs naturally when the ovaries become unable to produce oestrogen. This happens when the number of oocytes (egg cells/follicles) in the ovaries declines to very low levels. As a result less oestrogen and inhibin is produced by the ovaries due to lack of follicles which removes the negative inhibition of the HPG axis (see our article on the menstrual cycle for details).

This lack of follicles means that the ovaries respond less well to the hormones released from the pituitary gland called follicle stimulating hormone (FSH) and luteinising hormone (LH). This lack of response to FSH and LH causes the pituitary gland to produce more and more of these hormones, meaning that a high FSH level can indicate that menopause has begun (but this is not always reliable – see later in article).

It is the low oestrogen that causes most of the unwanted menopausal symptoms in women.

There are 4 main stages of the menopause:

In pre-menopause, ovulation becomes unpredictable and fertility is reduced. Ovulation now occurs early in the cycle or is absent entirely, therefore conception in this period is very difficult to achieve despite seemingly regular menstrual periods. This lack of ovulation lowers oestrogen, beginning to cause the menopausal symptoms listed below.

The low oestrogen causes the removal of negative feedback on the HPG axis as mentioned earlier, which increases FSH levels in the body, meaning that FSH could be used to indicate the beginning of menopause. However, this is not a very reliable test because ovulation and the hormonal release during this stage are very unpredictable, meaning that blood tests should not be used to define the beginning of the menopause.

This is the ‘transition period’ into the menopause. It is when the menstrual cycle and ovulation become even more unpredictable (oligomenorrhoea), and is when the symptoms of menopause are noticed.

Although ovulation is not common in this phase, it is possible, meaning that a woman is still technically fertile in this time and should use contraception when having sex if she does not want to conceive.

The menopause is defined as when the woman has not experienced a menstrual period in 12 months and therefore the number of ovarian follicles has reached 0. This is the end point of reproductive aging and the woman is no longer fertile.

The menopause includes the time from this cessation of periods (amenorrhoea) to when the menopausal symptoms begin to ease and disappear. In a sense this is a ‘second puberty’: when going through puberty, it takes time for the body to adapt to the new levels of hormones that are in the body; this is also true of the menopause.

This is the stage that follows the calming of the menopausal symptoms. As the drastic hormonal shifts settle, the body settles back into a natural rhythm and most of the symptoms of menopause become more manageable. To continue the analogy, this stage of the menopause is similar to the calming of the difficulties of puberty as adulthood is reached.

Most of these symptoms and signs can be attributed to the lack of oestrogen present in menopause.

The menopause can cause a lot of symptoms which can be very difficult to live with. This means that there are lots of options used to treat the symptoms or improve coping mechanisms, but there are no ways to prevent menopause entirely as it is a natural process of aging.

It is well known that increasing exercise and improving diet can improve general health, but can also improve the symptoms of menopause. Regular exercise can help to prevent weight gain and improve hot flushes. Exercise coupled with a healthy diet can also help improve mood. Smoking cessation is also a key part in improving general health and wellbeing.

Cognitive behavioural therapy can be used in to support women through the changes and help them to cope better. CBT can be used to remedy the anxiety, low mood, sleep and physical symptoms such as hot flushes, encouraging women to reframe their thoughts about their health.

Some women are able to combat the main symptoms of the menopause with alterations to how they live. For example, wearing many thin layers can help with hot flushes or sleeping with a number of thinner blankets rather than one thick one, as a layers can be removed and replaced quickly when symptoms occur.

Hormone replacement therapy (HRT) is the most common pharmacological therapy offered to menopausal woman to reduce the symptoms of menopause.

HRT replaces the oestrogen that has been lost with the cessation of ovulation. This does not prevent menopausal symptoms forever, because once the HRT is stopped (for the reasons explained later), there will still be the natural lack of oestrogen, which can cause the symptoms.

However, for some women this delay can be convenient, because the woman might be at a different stage in life where she can better cope with the symptoms, and in other women, a short prescription of HRT can cover the period where the symptoms would have occurred, meaning when ceasing HRT, they experience a lessened effect of the lack of oestrogen.

There are three main types of HRT. They are classified on whether they contain progesterone, and whether any regularly scheduled vaginal bleeding occurs.

One other option to taking combined HRT in a woman with a uterus is to use two different forms of hormonal supplementation. This can include one form that supplies oestrogen, like a patch or a gel (see later), and another form that supplies progesterone, like a progesterone-containing contraceptive intrauterine system (also called a coil).

HRT comes in many different forms, and it is important that a little is known about each form. These preparations can come in oestrogen only, sequential or continuous forms, and the choice of which form is best should be made as a joint decision with the prescriber and the patient. 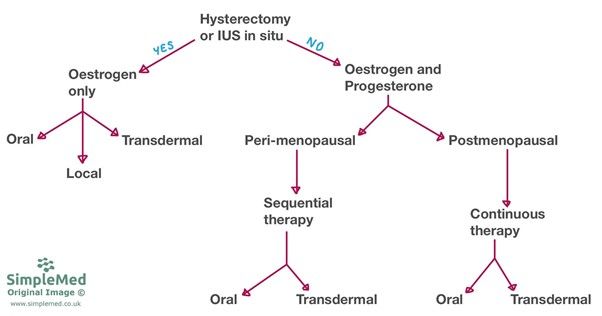 Diagram - The options for HRT prescriptions and when each is indicated

HRT can be started as soon as menopausal symptoms begin even if periods are still mostly regular at this point.

HRT can be stopped at any point, and if it is being taken to control the symptoms of menopause, it is often only needed to be taken for a short time. It can be taken for long periods though, there is no recommended limit to the prescription. If HRT is taken as a protective factor for osteoporosis (which is only used as a last line treatment), it might be taken on a more long term basis.

Weight gain, while concerning to many patients, has been shown to be unrelated to HRT use, and is instead related to menopause.

Premature menopause is a condition that occurs when the menopause occurs in a woman who is younger than 40 years old. It can be a devastating diagnosis for the patient as it marks the end of the naturally fertile period of a woman, so can drastically change the lives of women who have not yet competed their families.

A diagnosis of premature menopause can be made based on a number of blood tests:

There are many possible causes of premature menopause.

Oophorectomy – surgical oophorectomy (or the removal of the ovaries) will induce premature menopause. This can often be very severe, as there will be a sudden and very drastic drop in oestrogen levels.

Primary Ovarian Failure (POF) – primary/premature ovarian failure occurs when the ovaries stop working. This does have some known causes but can occur without a known cause.

Cancer Treatments – chemotherapy and radiotherapy can cause ovarian failure on a temporary or permanent basis. The chances of this occurring depend on the type of chemotherapy used, where the radiotherapy is focussed, and age at treatment (younger women can tolerate higher doses with less issues).

It is important that premature menopause is properly treated, as the extended period of time without oestrogen in the life can lead to more severe osteoporosis and atherosclerosis.

The mainstays of treatment for premature menopause are HRT and the combined oral contraceptive pill, depending on whether the woman wishes to become pregnant or not. POF with unknown cause can be unpredictable in ovulation, so a woman may still be fertile. It is often suggested that these therapies be extended to between 50 and 55 to offer the best cover in bone and cardiovascular protection.

It is also recommended that supportive therapy options be provided to women who go through premature menopause, as the changes to hormone levels and possible loss of fertility can be very difficult.