Next Lesson - The Thyroid Gland

Disorders of the pituitary gland are relatively rare and can manifest themselves as either an over- or under-secretion of pituitary hormone.

Pituitary disorders are most commonly caused by a pituitary adenoma, a benign pituitary tumour. Most of these tumours are non-functioning, meaning that they do not produce any hormone themselves, but cause an inadequate production of one or more pituitary hormones due to the physical pressure of the growing tumour on the glandular tissue. Symptoms of a pituitary adenoma include; headaches, visual problems, nausea and vomiting. These are also all caused by the adenoma putting pressure on the surrounding structures.

Functioning tumours, also known as hyper-secreting tumours, are rarer, and their clinical symptoms are dependant on which pituitary hormone they are over-secreting and its systemic effects. Tumours are investigated by an MRI scan, assessment of the visual fields, and blood tests measuring hormone levels.

Hypopituitarism is most commonly caused by a pituitary adenoma putting pressure on the pituitary glandular tissue. There is typically progressive loss of anterior pituitary function, with growth hormone (GH), luteinising hormone (LH) and follicle stimulating hormone (FSH) most commonly affected first. This can result in pituitary dwarfism in children, and problems with the menstrual cycle in females. The posterior pituitary is normally only affected if the tumour also affects hypothalamic function, or if an inflammatory process is involved. This means that the secretion of oxytocin and anti-diuretic hormone (ADH) are normally unaffected.

The symptoms of GH deficiency are subtle, and consist of decreased exercise tolerance, decreased muscle tone, increased body fat, and a reduced sense of well-being. Couple this with the fact that GH is released in a pulsatile fashion, GH deficiency can be very hard to diagnose. Whilst in adults the cause is most commonly a pituitary adenoma, in children it is idiopathic (although specific genetic mutations and autoimmune inflammation may be linked). It has little effect on fetal growth, but severe prenatal deficiency can cause hypoglycaemia and jaundice. From aged one to mid-teens, GH deficiency results in poor growth and short stature, which can be treated with GH manufactured by recombinant DNA technology.

Gonadotrophin (LH and FSH) deficiency can result in lack of libido, infertility, and oligomenorrhea or amenorrhea in women of reproductive age. In men, it can also decrease libido and cause impotence.

Thyroid stimulating hormone deficiency can be caused by a pituitary adenoma and can lead to hypothyroidism with symptoms that include feeling cold, weight gain and bradycardia. This will be discussed further in the article on the thyroid gland and thyroid disorders.

Adrenocorticotropic hormone deficiency can be caused by a pituitary adenoma, and symptoms include tiredness, dizziness and low blood pressure. This is discussed further in the article on the adrenal gland and adrenal disorders.

ADH deficiency may result from a hypothalamic tumour, or a pituitary tumour that has extended up into the hypothalamus. Other causes include cranial radiotherapy, pituitary surgery, autoimmune infiltration and infections such as meningitis. It results in excess secretion of dilute urine, resulting in dehydration and an increased sensation of thirst. The condition represents the cranial form of diabetes insipidus. 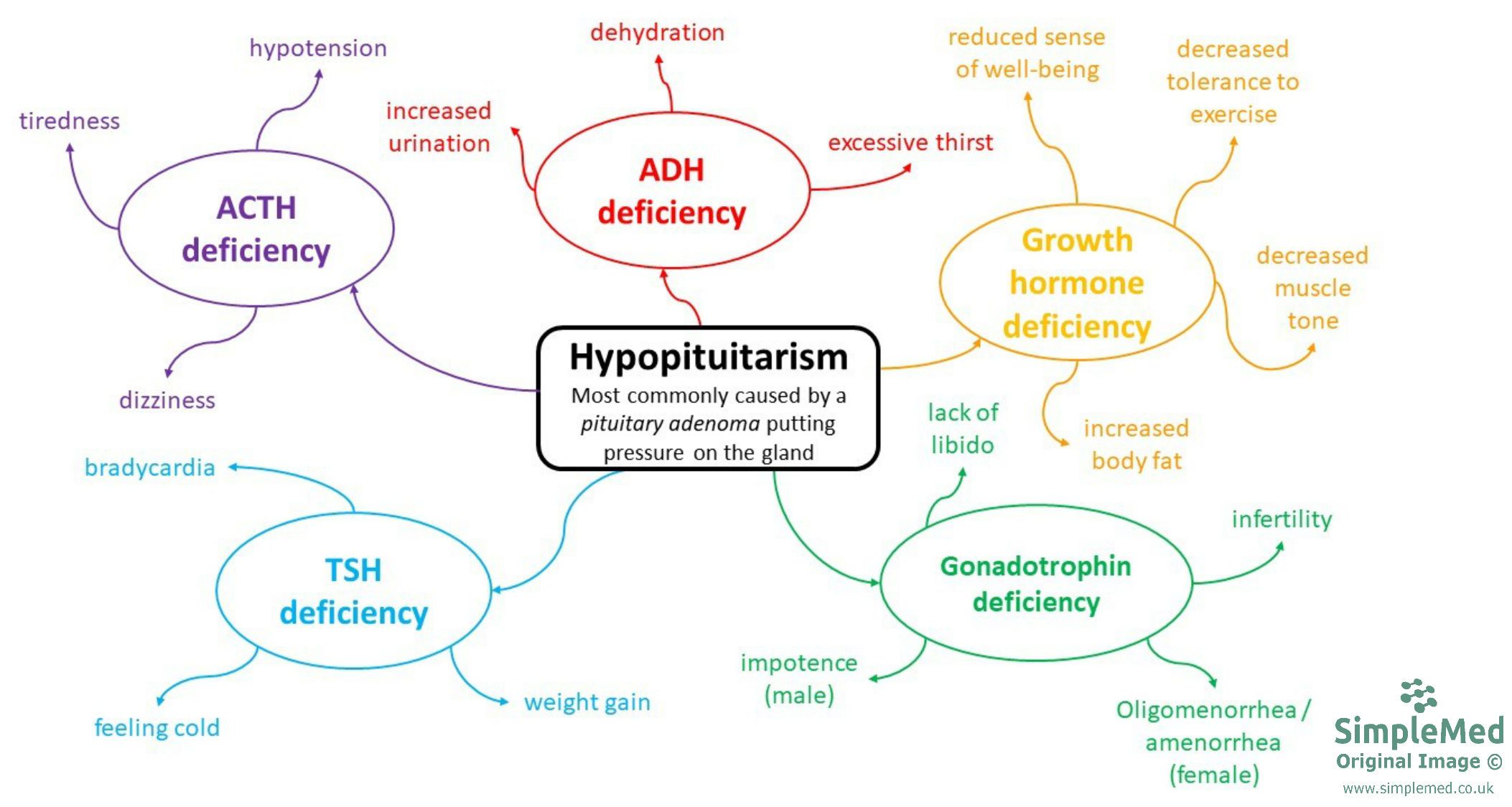 Diagram: A mind-map outlining the most common symptoms of the different forms of hypopituitarism

Hyperpituitarism is usually caused by a hypersecreting pituitary adenoma. The three hormones most commonly affected are prolactin GH and ACTH.

Hyperprolactinaemia is a condition involving the presence of excess amounts of prolactin in the body. It is the most common form of pituitary disorder, and is most commonly caused by a prolactinoma (a pituitary adenoma that secretes prolactin). Other causes include pregnancy, suckling during breastfeeding, stress and exercise. Symptoms include galactorrhoea, gynecomastia, hypogonadism, amenorrhea and erectile dysfunction. The increased concentration of plasma prolactin increases negative feedback on the hypothalamus, causing an increase in the production of dopamine (also known as prolactin inhibiting hormone) to try and bring the prolactin levels back within normal limits. However, the increased dopamine levels decrease the release of GnRH, causing a diminished sex hormone production. The first line of treatment is usually a dopamine receptor agonist (e.g. cabergoline), which is usually sufficient in most cases, however in some rare cases trans-sphenoidal surgery or radiotherapy may be required.

GH excess is caused by large growth-hormone secreting pituitary adenomas, and is associated with local mass effects such as headaches, visual field defects and other cranial nerve palsies. The systemic effects are through both the direct actions of GH, and through the stimulation of local IGF-1 production. The effects often take several years to develop, so it can take a while for a diagnosis to be made. Changes to the patient include broad nose, coarse facial features, thick lips, a prominent supraorbital ridge, enlarged hands and feet, greasy skin, excessive sweating and deepening of the voice. In childhood this can result in gigantism as the epiphyseal growth plates have not fused, so the excess growth hormone increases somatic growth, while in adults it results in acromegaly as the growth plates have fused, so height is not affected.

GH antagonises insulin, meaning metabolic conditions such as diabetes mellitus can occur, and the increased IGF-1 levels have been associated with some forms of cancer. Three types of treatment options are available for patients with acromegaly: surgery to remove the adenoma, radiation therapy or drug therapy (e.g. somatostatin analogues to prolong GH suppression or GH receptor antagonists).

ACTH excess is one of the causes of Cushing’s syndrome, which can be found in the article on the adrenal glands and adrenal disorders. 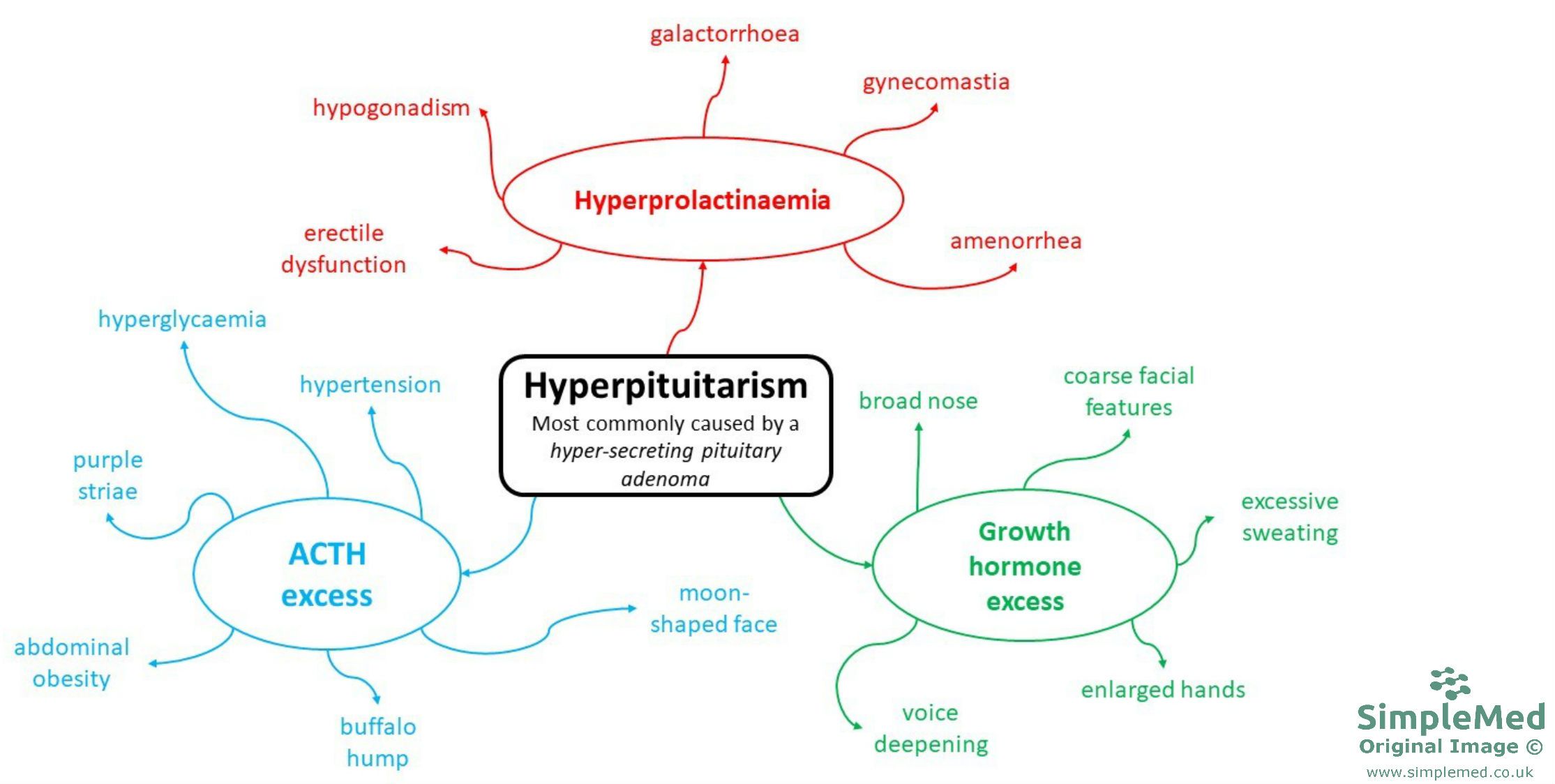 Diagram: A mind-map outlining the most common symptoms of the different forms of hyperpituitarism