An Introduction to Receptors

A receptor is a protein molecule which binds a chemical signalling molecule – termed a ligand – and undergoes a conformational change which activates a signalling pathway to ultimately bring about a cellular response. Activation of a receptor is often followed by a second messenger production, wh.ich may activate intracellular signalling cascades – this process is known as signal transduction.

There are several classes of receptor:

This article will focus on G-protein coupled receptors and their respective signalling pathways.

Structure of GPCRs and G-Proteins 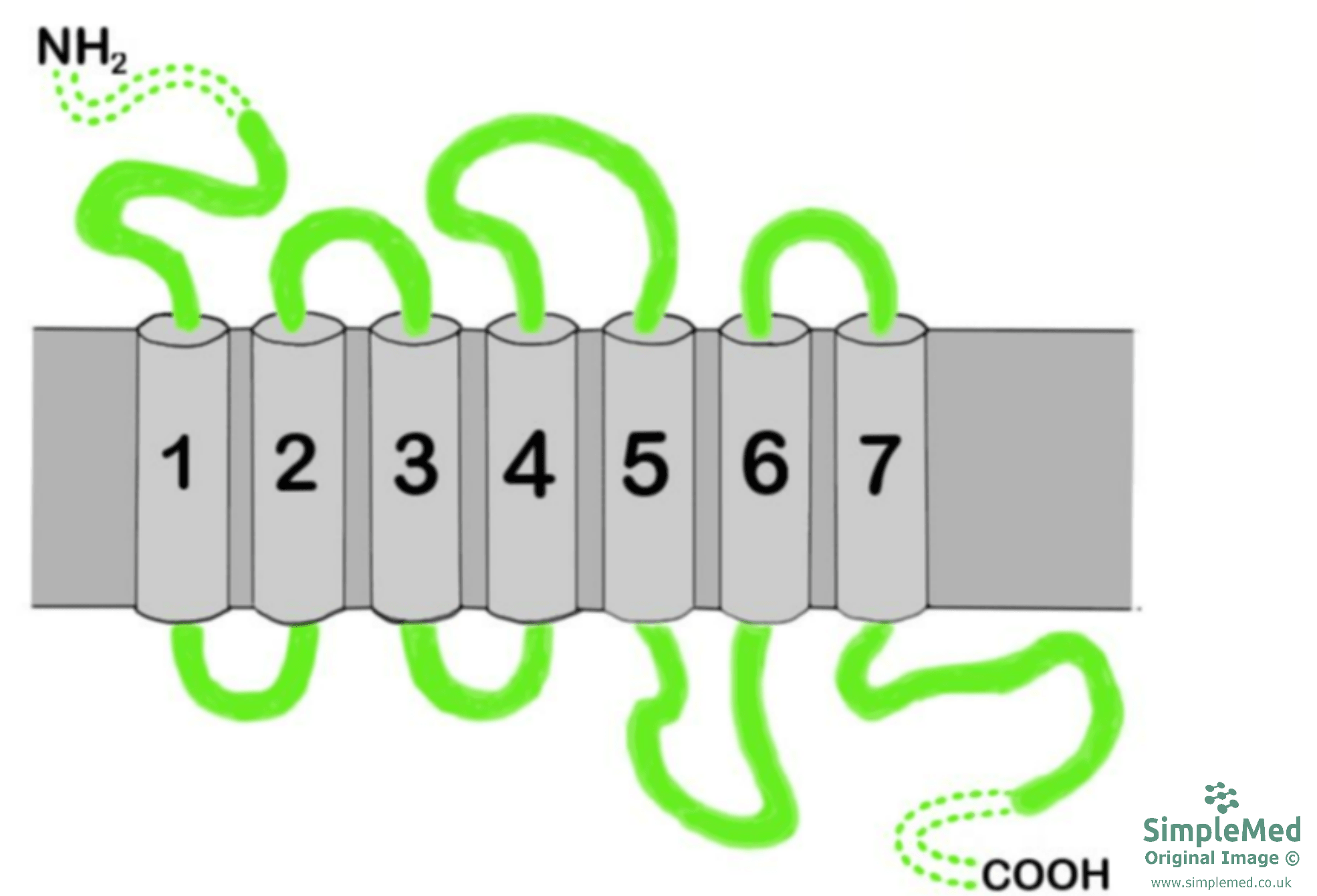 Image - Structure of a G-protein coupled receptor within a membrane, showing the 7 transmembrane domains

G-proteins, also known as guanine nucleotide-binding proteins, are peripheral membrane proteins. They consist of 3 subunits: an alpha subunit and a beta-gamma subunit (the beta and gamma subunits are permanently fused together).

When a ligand (an agonist in this case) binds to its GPCR, the GPCR undergoes a conformational change and is said to become activated. This can be summarised by the equation R => R*. The activated GPCR then interacts with its associated G-protein by causing GTP to exchange for GDP on the G-protein’s alpha subunit. This GTP-GDP exchange results in separation of the alpha and beta-gamma subunits. These subunits can then go on to activate various effector proteins – these include second messenger enzymes and ion channels. 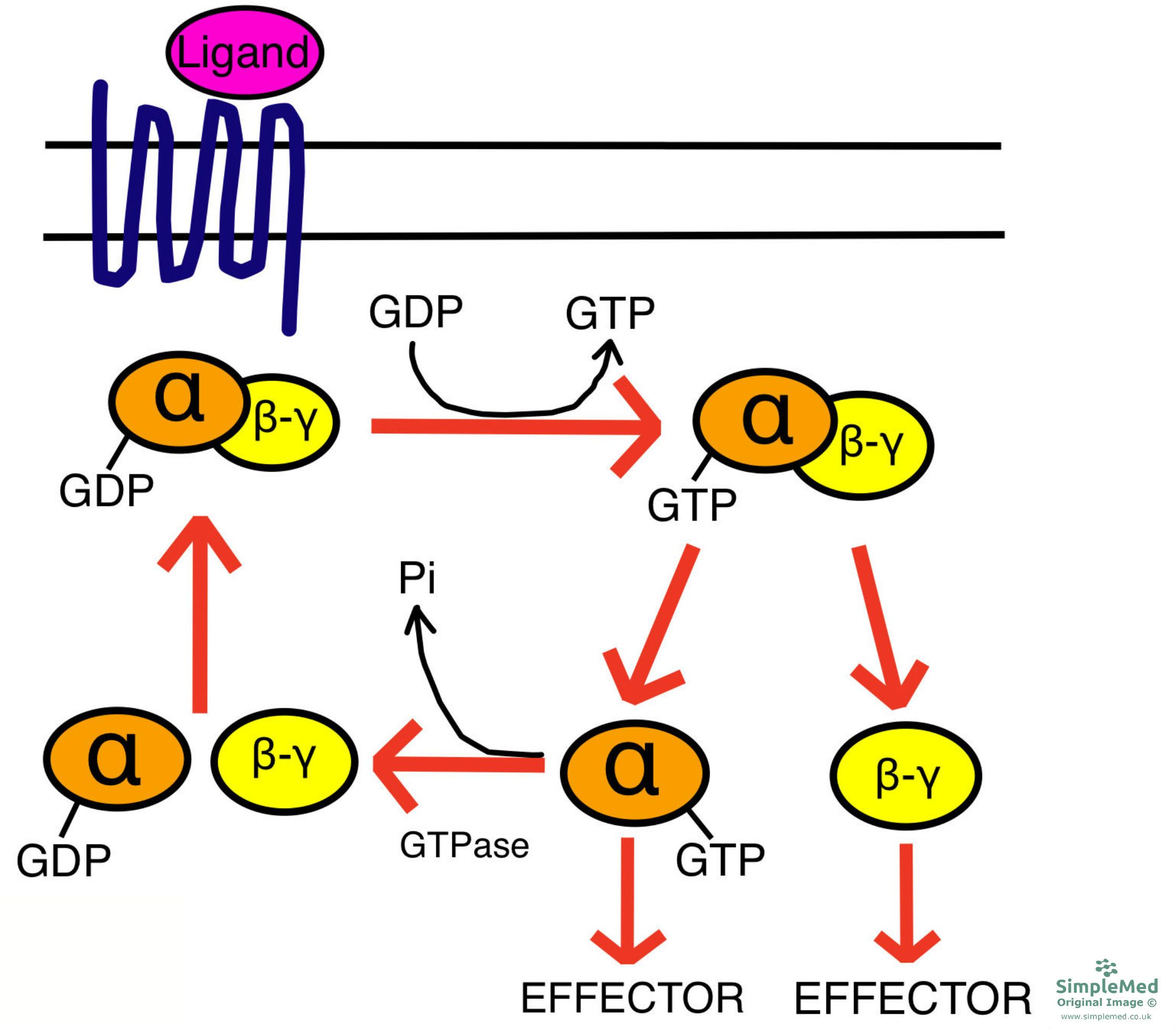 Diagram - Activation and deactivation of a GPCR

Different types of G-protein activate different signalling pathways. In general, the G-alpha subunit will have an stimulatory or inhibitory effect on an enzyme which generates a second messenger molecule which will then go on to activate various signalling cascades. The beta-gamma subunit may also be involved in signalling, but in this article we will focus on the alpha subunit.

There are 3 main subtypes of the G-alpha protein:

Gs: The G-alphas protein activates the enzyme adenylyl cyclase, which generates the second messenger, cyclic AMP (cAMP), from ATP. cAMP activates protein kinase A (PKA) by binding and relieving it of its regulatory subunits. PKA is a kinase enzyme which phosphorylates various proteins, resulting in activation or inhibition of the target protein. This reaction may be part of a larger signalling cascade.

Gq: The G-alphaq protein activates the enzyme phospholipase C, which converts PIP2 (a phospholipid) to IP3 and DAG (second messengers). A rise in IP3 is generally followed by an increase in intracellular calcium as it stimulates calcium release from the smooth endoplasmic reticulum (see article on membrane transport and calcium signalling). 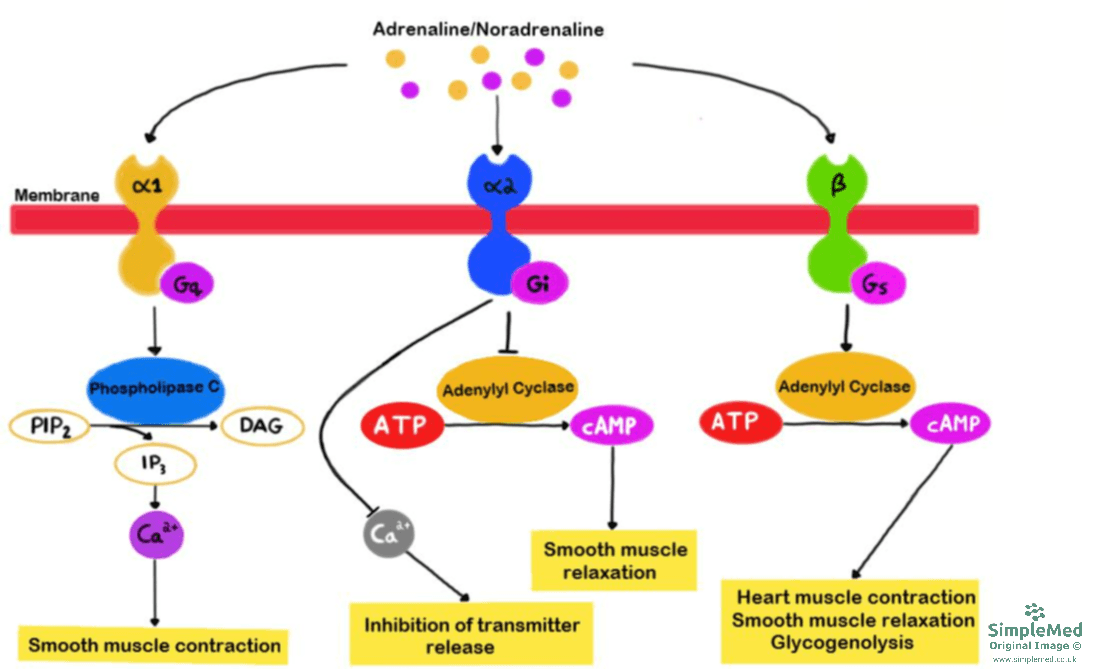 In order to terminate signalling, the G-alpha subunit has an intrinsic GTPase domain, which slowly hydrolyses the bound GTP to GDP. Once the hydrolysis is complete, the alpha and beta-gamma subunits re-assemble and become inactive once again, resulting in termination of signalling.

The phenomenon of signal amplification means that only a few molecules of ligand are needed to elicit a relatively large cellular response.

Table - A summary of the GPCRs

Beta-1 adrenoceptors can be found in the heart – stimulation of these receptors will cause an increase in heart rate and contractility.

Beta-2 adrenoceptors can be found in bronchiolar smooth muscle and also vascular smooth muscle in arterioles supplying the skeletal muscles and myocardium (i.e. coronary arteries) – stimulation of these receptors results in smooth muscle relaxation and therefore bronchodilation and vasodilation respectively.

The heart also expresses M2 receptors – stimulation of these receptors will cause the heart rate to decrease.