Next Lesson - Oral Cavity and Pharynx

The nose is part of the respiratory tract situated immediately superior to the hard palate.

Functions of the nose include:

The external nose is the visible portion of the nose which protrudes from the face. Its prominent nature makes it particularly susceptible in facial trauma.

The nose has two external openings called the nares (or nostrils). Via the nares, inspired air immediately enters the vestibule of the nose, which is lined with skin containing sebaceous glands and hairs which assist in trapping unwanted particles from the air.

The skeleton of the nose is predominantly hyaline cartilage with a proximal bony root.

There are 5 nasal cartilages: 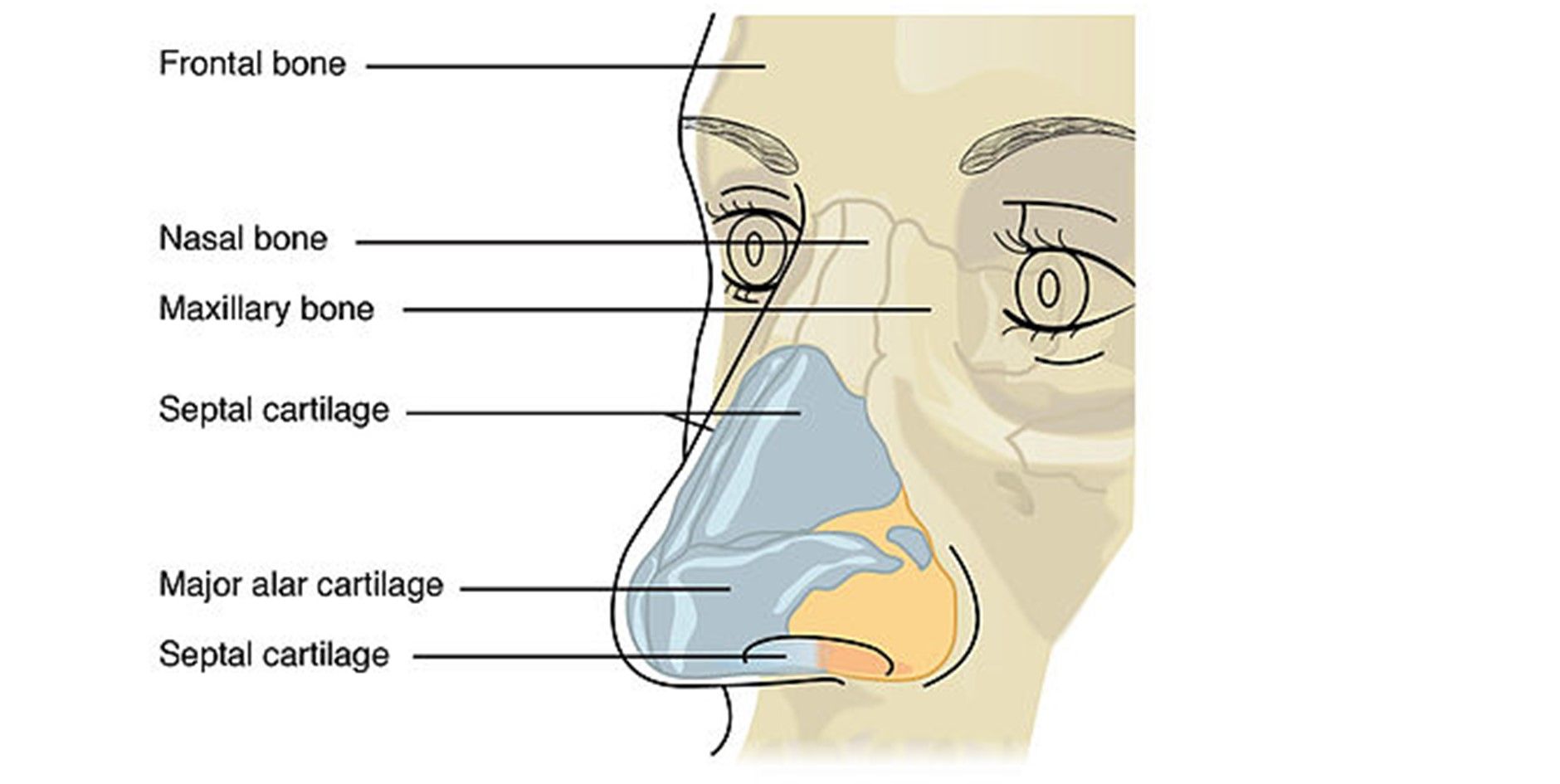 The nasal cavity is the internal space of the nose, which extends from the vestibule to the nasopharynx. It is practically horizontal in nature.

The boundaries of the nasal cavity are:

The nasal septum separates the left and right nasal cavities. It has 2 parts: 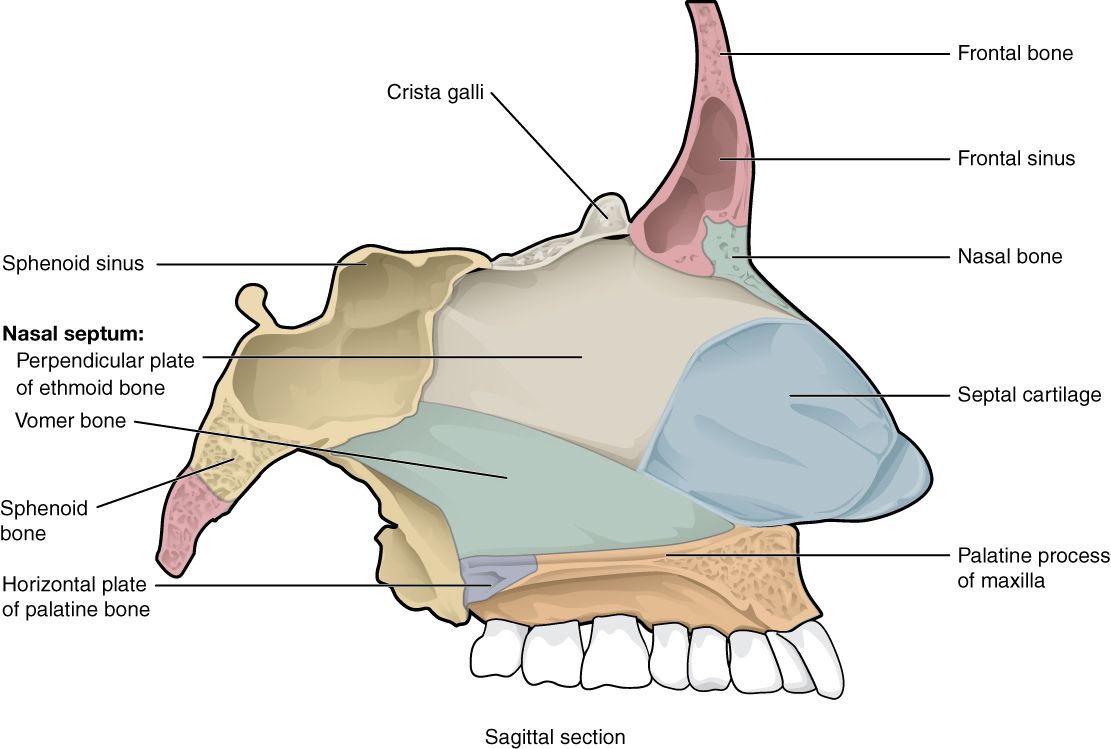 Trauma to the nose could shear blood vessels in the nasal septum, causing a septal haematoma. This haematoma separates the cartilage from its overlying perichondrium, depriving the cartilage of its blood supply. If left untreated, the septal cartilage undergoes avascular necrosis and remodelling, resulting in a saddle-nose deformity.

The nasal cavity is lined with mucosa and is highly vascular.

The olfactory mucosa lines the roof of the nasal cavity and houses olfactory neurones, which are responsible for our sense of smell. They produce action potentials in response to chemical stimuli (aromas), which are conducted along the olfactory nerve (CN I).

The rest of the nasal cavity is lined with respiratory mucosa. It is composed of pseudostratified columnar epithelium and houses cilia and mucous glands. It acts to warm, humidify and filter inspired air.

The nasal conchae (or turbinates) are bony shelf-like projections from the lateral walls of the nasal cavity. There are 3 pairs of conchae: superior, middle and inferior. Each concha has a respective meatus, which is a gap underneath the curve of the concha. The function of the conchae is to induce turbulent air flow, thereby slowing air flow and increasing the opportunity for humidification and warming. 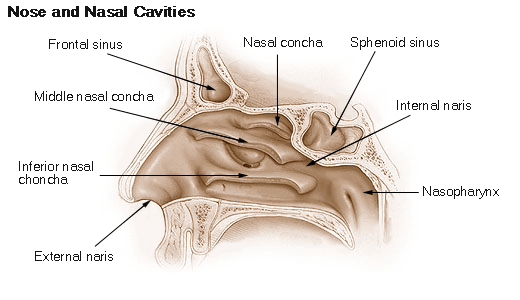 Diagram - The nasal cavity and conchae

The paranasal sinuses are air-filled extensions of the nasal cavity. They are lined with respiratory mucosa and act to warm and humidify inspired air.

There are 4 pairs of sinuses: 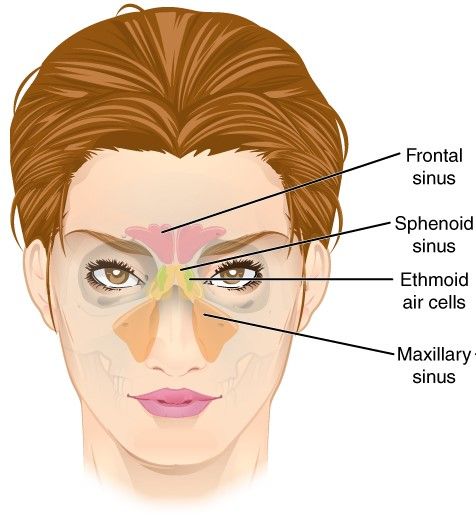 The paranasal sinuses have important anatomical relations with:

Vasculature of the Nose

The nasal cavity is supplied by branches of the ophthalmic, maxillary, and facial arteries:

These arteries anastomose in the anterior nasal septum. This anastomosis is named Kiesselbach’s plexus or Little’s area and is a common source of epistaxis. 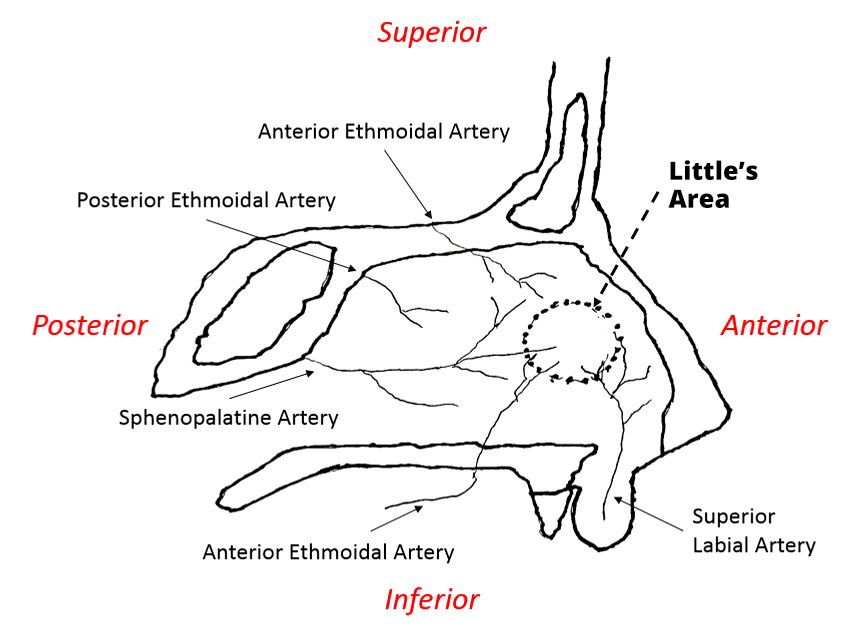 Venous blood is drained via the sphenopalatine, facial, and ophthalmic veins. There is also a communication with the cavernous sinus, hence the nose is part of the ‘danger triangle’ of the face, where infections can potentially spread intracranially.

Epistaxis (a nosebleed) is often a minor and self-limiting problem. However, persistent bleeds can be serious and lead to hypovolaemia.

The most common cause of epistaxis is minor trauma to the nose. However, predisposing factors include coagulopathies, connective tissue disorders and malignancy.

Epistaxis can be anterior or posterior in origin:

The management steps for epistaxis are as follows (in this order):

Innervation of the Nose

Special sensory innervation (olfaction) is supplied via the olfactory nerve (CN I).

The somatosensory innervation of the nasal cavity is via branches of the trigeminal nerve (CN V):

Conditions Affecting the Nose and Sinuses

Rhinitis is an umbrella term for inflammation of the nasal mucosa. It encompasses both the common cold (coryza) and allergic rhinitis (hay fever). Typical symptoms include nasal irritation, sneezing, nasal discharge and congestion.

The common cold is caused by a range of respiratory viruses, including rhinoviruses, adenoviruses and coronaviruses. It is transmitted via droplet spread and is highly contagious, however disease is often mild and self-limiting. In addition to nasal symptoms, individuals may experience fever, fatigue, malaise and sore throat.

Sometimes viral infection can spread from the nose to the paranasal sinuses, resulting in sinusitis. Roughly 2% of cases are complicated by a bacterial infection (with Streptococcus pneumoniae or Haemophilus influenzae). Clinical features include frontal headache, purulent nasal discharge, facial pain and tenderness, and fever. Sinusitis is normally self-limiting, however, bacterial sinusitis can be treated with antibiotics. Bacterial sinusitis is more likely if symptoms are particularly severe at onset, persist after 10 days or get worse after initial improvement.

Hay fever is a manifestation of a Type I hypersensitivity reaction (allergy). B cells recognise allergens and produce IgE, which binds to mast cells and causes them to release histamine, resulting in local inflammation. Common allergens include pollen, dust mites, animal dander and mould. Hay fever also commonly affects the eyes and is associated with other atopic illness such as asthma and eczema. Management is with oral antihistamines and intranasal corticosteroids.

In children, another important differential for nasal discharge is a foreign body.