Cellular membranes are described as semi-permeable as they allow some substances to pass through but not others. The cell membrane is composed of a phospholipid bilayer and membrane proteins (for more info check out our article on Biological Membranes). The permeability of a molecule therefore depends on its ability to pass through either of these components.

The phospholipid bilayer allows both hydrophobic and small, polar (uncharged) molecules to freely diffuse through it. Examples include O2, CO2, water, urea, and glycerol. The lipid bilayer is impermeable to charged ions and large polar molecules such as glucose.

The membrane’s permeability to ions and larger molecules, however, is dependent on the expression of protein channels and transporters. This can vary depending on cell type – for example, neurones and muscle cells have a much higher permeability to Na+ and K+ compared to non-excitable cells due to a higher frequency of Na+ and K+ channels involved in generating the action potential.

Many ion channels are only open under certain circumstances and are said to be ‘gated’. There are 3 main types of gated ion channel:

For uncharged molecules, we are only concerned with the concentration gradient. We use the formula: ΔG = RT. loge([X]in/[X]out); where R is the gas constant (8.314 J mol-1 K-1), T is temperature (K), and [X]in and [X]out are the concentrations on the inner and outer sides of the membrane respectively.

For ions, we must also take into account the electrical gradient (i.e membrane potential) – positively charged ions will tend to move to areas of negative charge and vice versa. We use the formula: ΔG = RT. loge([X]in/[X]out) + ZF. ΔΨ; where RT. loge([X]in/[X]out) is the same as above, Z is the charge on the ion (e.g. sodium is +1), F is the Faraday constant (96485 C mol-1) and ΔΨ is the membrane potential (V).

Primary active transport is where the energy is derived directly from ATP hydrolysis. This is achieved by pump proteins, or ATPases: examples include the Na+/K+ ATPase (also see article on Membrane Potential) and the plasma membrane Ca2+ ATPase (PMCA). 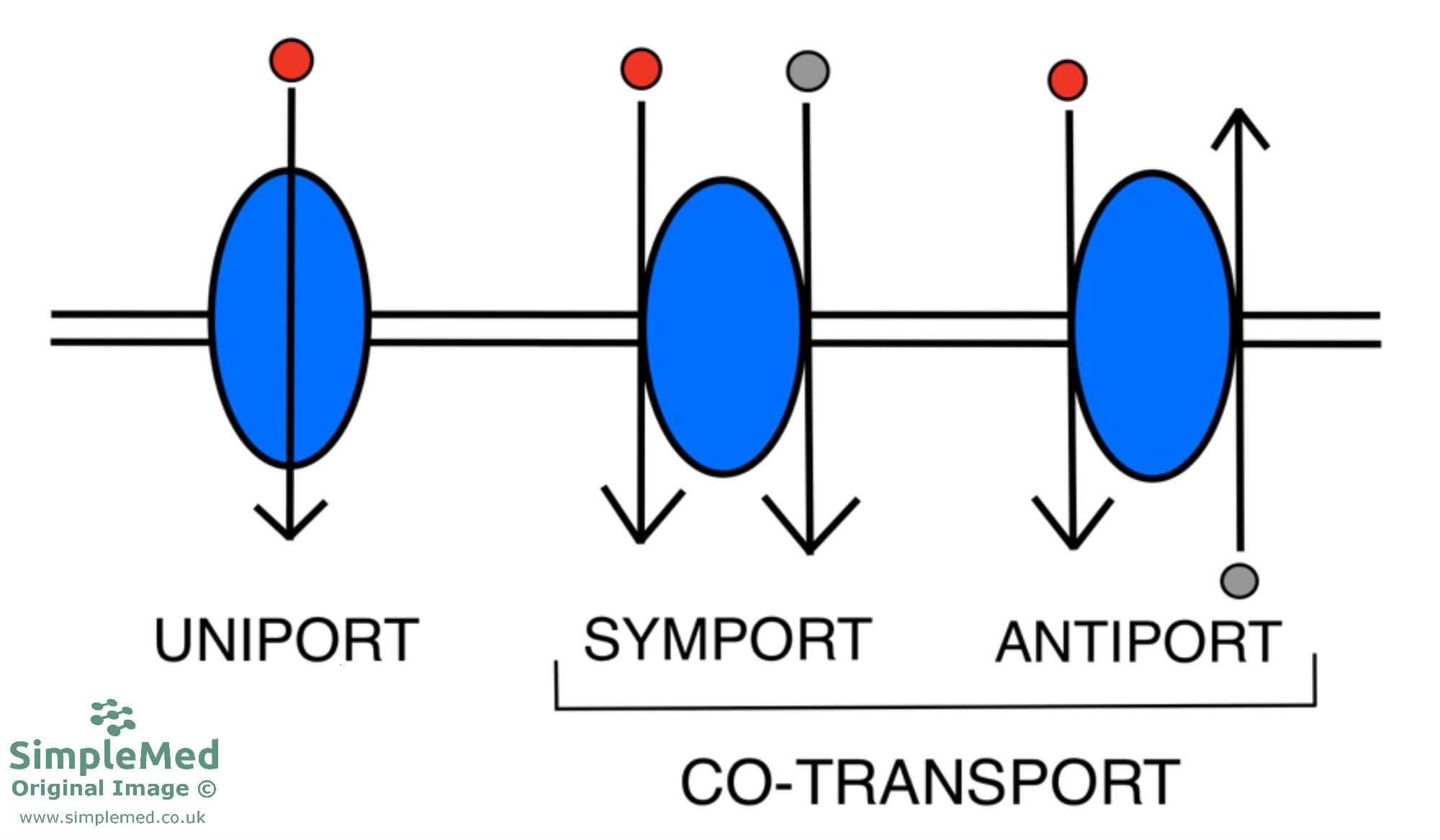 Diagram - The classification of the different types of cell membrane transporters

Intracellular pH is regulated by the movement of H+ (acid) and HCO3- (base) into or out of the cell. This can be achieved by a variety of transporter proteins on the cell surface membrane.

The Na+/H+ exchanger is an acid extruder and therefore alkalinises the cell (raises pH). It uses a pre-existing Na+ gradient to move 1 Na+ into and 1 H+ out of the cell (secondary active transport). This transporter is found on most cells, but is particularly important in the kidney tubule, where it can be targeted by amiloride (a K+ sparing diuretic).

The Na+/HCO3- co-transporter causes alkali influx and therefore also alkalinises the cell. It uses a pre-existing Na+ gradient to move both 1 Na+ and 3 HCO3- into the cell. This transporter is found on a wide variety of cells.

The anion exchanger (AE), or Band 3, is a an alkali extruder and therefore acidifies the cell. It moves 1 Cl- in and 1 HCO3- out. This transporter is found on erythrocytes and also in the kidney tubule.

The human body contains over 1kg of calcium, however more than 99% of this is locked away in bone as insoluble hydroxyapatite [Ca5(PO4)3(OH)]. The remaining 1% is distributed throughout the extracellular and intracellular fluid. Most of the body’s soluble calcium is found in the extracellular compartment (i.e. the blood and interstitial fluid), although approximately half of this is bound to plasma proteins such as albumin. The concentration of Ca2+ inside the cell’s cytoplasm is actually very low and kept within tight limits, as high concentrations of Ca2+ are directly toxic to the cell. The cell does however have a store of Ca2+ within the endoplasmic reticulum (or sarcoplasm reticulum for muscle cells).

Normal Ca2+ concentrations are as follows:

The resting concentration of Ca2+ inside the cell is controlled by multiple protein transporters:

Many cell signalling pathways involve a rise in intracellular calcium. This increase can be achieved using a variety of different Ca2+ channels: 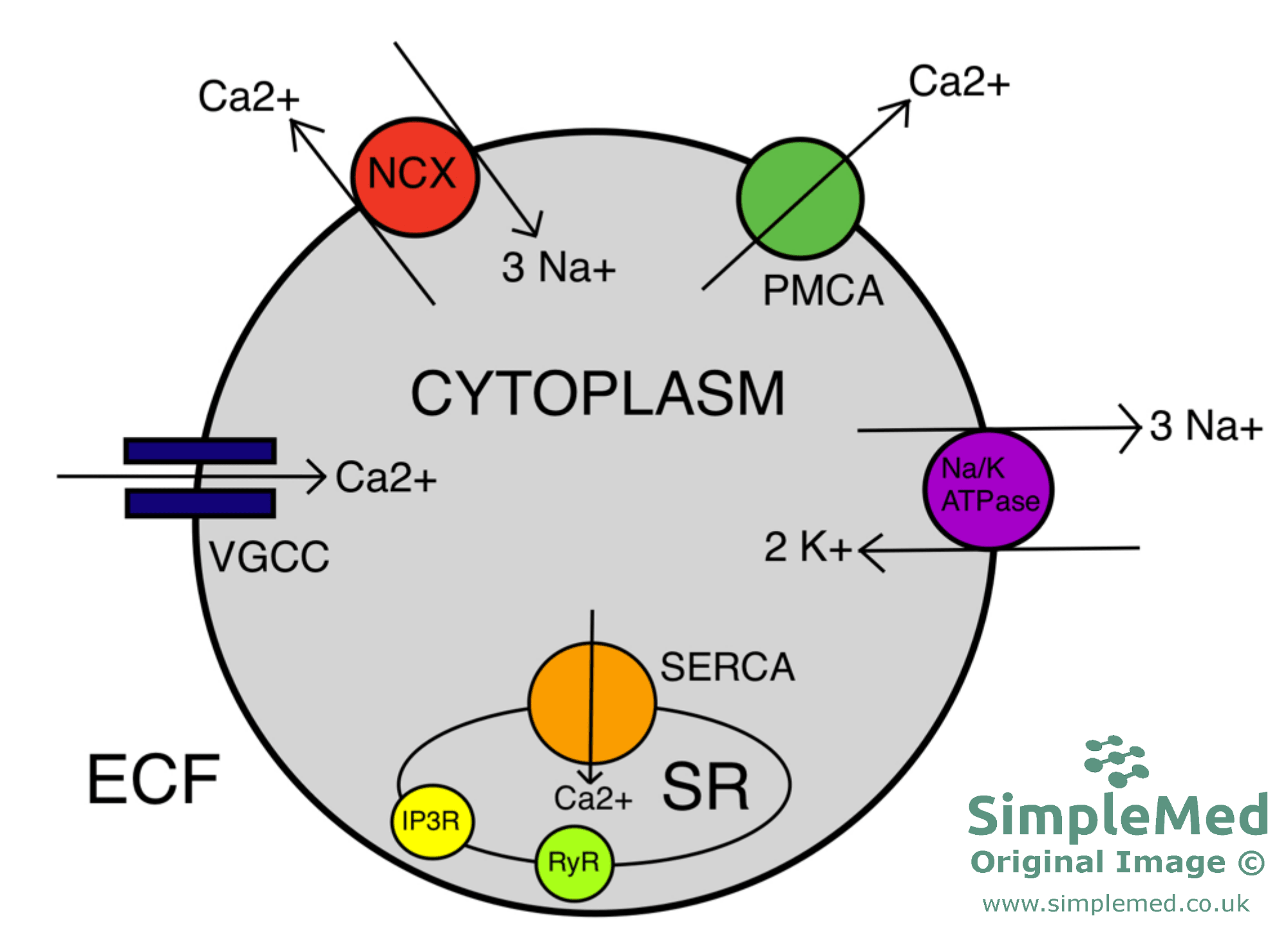