By Marcus Judge and Ethan Kavanagh

To understand this article, we advise that you read the Innate Immune Response, or have a rough understanding of it.

As outlined in the previous article although the innate response is rapid, it lacks memory and the ability to change the intensity of a response; this is where the adaptive immune system comes in. So why does the adaptive immune response not start immediately fighting bacteria on infection?

While the innate immune response is coordinating the early ‘front line’ response against the invaders, the adaptive response must wait for its cells to become activated. Certain types of cells, called antigen presenting cells (APCs), are circulating around the body waiting to bind to foreign antigens that they do not recognise. APCs are a diverse group including macrophages, monocytes (macrophages in the blood), dendritic cells, Langerhans cells, and B-lymphocytes.

An antigen presenting cell, e.g. a macrophage, will phagocytose a foreign pathogen, as part of the innate immune response. After taking in the pathogen and degrading it with lysozymes, a small sample of the antigen from the pathogen is then be displayed ("presented") (hence the name antigen presenting cell) on the surface of the macrophage using a molecule called a Major Histocompatibility Complex (MHC). This process can be broken down into 3 simple steps of: Capture (phagocytosis), Processing (digestion down to antigen fragments) and Presentation (using an MHC).

The next step is T cell activation. This occurs with binding between the antigen-displaying MHC on the macrophage surface and a T-lymphocyte. This requirement for specific antigen-antibody binding that causes a delay in the adaptive immune response activation. Once the T-lymphocytes are activated, both APC’s and a T-lymphocyte are required to activate B-cells to produce specific antibodies, signalling using cytokines. T lymphocytes also begin to proliferate and starting to mount their own attack against the invading pathogen. We’ll come back to T- and B-lymphocytes, as we need to discuss how the APCs do their job.

Presentation of antigens is classified by the major histocompatibility complex. The MHC consists of a set of cell surface proteins that are split into two main classes (there is a third, but it isn’t as important as the first two). In humans, the MHC class is based on the human leukocyte antigens (HLAs) it expresses.

There are two main classes:

MHC class I- molecules are expressed on all cells not just APC’s and express HLA-A, HLA-B and HLA-C. MHC Class I molecules bind to T-lymphocytes (specifically cytotoxic T-cells, aka T-killer cells) via CD8+ receptors. Only intracellular microbes (e.g. a virus which has entered the cell) are presented via MHC class I molecules.

MHC class II- molecules are only found on antigen presenting cells. This is as MHC Class II is used to present extracellular microbe antigens. APC’s are the only cells which can carry out phagocytosis to obtain the antigens from extracellular microbes, so must be the only cells with MHC class II proteins. Once an APC processes the antigen, it puts a little piece of it (called the epitope) on its cell surface along with a class II molecule. These APCs can then bind to the CD4+ receptors on naïve T cells (those that have matured from the thymus but not been activated before i.e. bacteria the body has not fought before) which differentiate into T helper (Th) cells. There are different types of T-helper cells - what determines the fate of each naïve T-cell are the co-stimulatory proteins (cytokines) that also bind to the naïve T-cell. The three most important types of T helper cell are Th1, Th2, and Th17. Both intracellular and extracellular molecules can be presented via MHC class II molecules.

A helpful way of remembering which class of MHC binds to which CD receptor is:

When you multiply the MHC class and CD number together you should get 8:

An intracellular organism, for example a virus invading a cell to take over its replication machinery, can infect any cell. For this reason, MHC class 1 is expressed on all cells.

An APC can present both MHC class 1 molecules (as can all cells), as well as MHC class 2 molecules (specific to APCs) - this called cross-presentation and allows the APC to deal with both intracellular and extracellular pathogens (which it phagocytosed).

So, if an APC (e.g. a macrophage) with its epitope (the part of an antigen molecule to which an antibody attaches itself) bound to an MHC molecule arrives at a naïve T-cell –what next?

If that APC happens to be expressing the epitope in an MHC class I molecule, this will be bound by a T cell expressing the CD8+ receptor, leading to the activation of a cytotoxic T-cell. This ‘killer’ cell then kills any infected body cells.

Once a MHC class II molecule binds to the CD4+ receptor on T-cells, they can differentiate into either Th2 or Th17 cells.

Th17 just has one action we need to know, and that is activating neutrophils by interleukin (IL) 17.

A quick summary so far

If you are unlucky enough to have had chicken pox, the good news is you shouldn’t ever get it again. This is because if Varicella zoster has invaded before, the body is now able to destroy it before it causes disease before it causes symptoms (the secondary immune response), since it has developed a memory against it.

The primary response is your body’s first response to a new pathogen that it has never encountered before. The primary antibody produced against this response is IgM, which is less specific than an IgG reaction. It takes around 5-10 days for a peak primary immune response to be mounted, which is slow.

On the second exposure to the same pathogen, the secondary immune response is activated. This is primarily IgG based and takes less time - usually 3-5 days to reach peak. This is a much faster and stronger response which also lasts longer than the primary immune response with IgM. This is also the basis behind vaccines where the initial exposure is to an antigen or an attenuated or dead pathogen so that the memory can be built allowing for a secondary immune response to be mounted immediately when the pathogen is first naturally encountered. This is beneficial as some diseases e.g. Polio cause death and disability even after one exposure. The use of vaccines means that this unneeded suffering is not required to build up a secondary response. 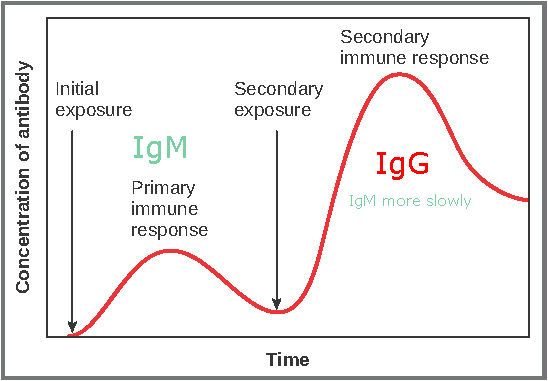 The important thing to remember is that you won’t get a secondary immune response with the same pathogen unless the same antigens that were there during the primary immune response are present. An example where this is relevant is with the influenza virus. It has certain antigens, such as H aemagglutinin and Neuarminidase (which are also used to name certain flu strains, eg. H1N1), which are slightly different between flu strains. It is possible to get the flu annually because the antigens are constantly mutating and memory is not for the new unencountered strain. This means the flu vaccine is also only effective for that specific season as any new mutated strains cannot be anticipated.