Diabetes Mellitus (DM) is the term used for metabolic disorders characterised by chronic hyperglycaemia (increased plasma glucose levels), which can be caused by insulin deficiency, insulin resistance or both. Diabetes mellitus is typically characterised as either Type 1 or Type 2, distinguished by their epidemiology and probable causation, but they cannot always be easily clinically distinguishable.

T1DM is most common in the young, and is usually diagnosed as a teenager. It is an autoimmune condition, which is thought to be caused by a genetic predisposition (although the inheritance pattern is currently unknown) mixed with an environmental trigger, producing an autoimmune reaction in which the production of lymphocytes, macrophages and auto-antibodies attack and progressively destroy pancreatic β-cells.

A typical patient would be a lean, young person, with a recent history of viral infection, who presents with a triad of symptoms: polyuria, thirst, and weight loss. This triad of symptoms is very characteristic of T1DM, and is explained below:

T1DM is easily diagnosed by measuring the plasma glucose concentration. In diabetes the lack of insulin causes decreased uptake of glucose into adipose and skeletal muscle, and decreased glucose storage as glycogen in muscle and liver, meaning that plasma glucose levels become raised.

If T1DM is not treated early, patients can develop diabetic ketoacidosis. The high rate of β-oxidation of fats in the liver, coupled with low insulin/anti-insulin ratios, leads to the production of huge amounts of ketone bodies, such as acetoacetate, acetone, and β-hydroxybutyrate. Acetone is a volatile substance and is therefore breathed out and smelled on the patient’s breath. Symptoms of ketoacidosis include: prostration, hyperventilation, nausea, vomiting, dehydration and abdominal pain.

T1DM cannot be cured and must be managed for the rest of the patient’s life with insulin injections, which can vary in method of injection and half-life. The social and psychological implications of living with T1DM are vast, which can contribute to the degree of control of the condition achieved by the patient. Along with insulin, dietary management and regular exercise must be considered to better manage the condition.

The management of blood glucose requires frequent blood glucose measurement. A small amount of blood from a finger prick is sufficient to measure blood glucose using a BM stick and reader, however these devices are only accurate if used carefully. There is always a risk of a diabetic patient becoming hypoglycaemic, which must be treated with oral or IV glucose. 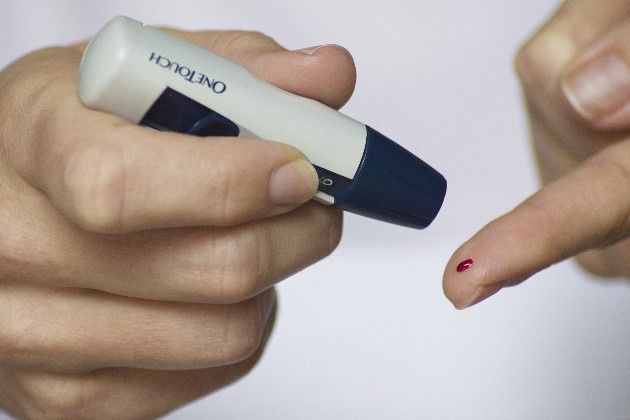 Diagram: An example of a BM stick used by patients with T1DM to measure their own blood glucose levels

As with T1DM, patients will present with the classical triad of symptoms (polyuria, thirst, and weight loss), but will also present other symptoms such as lack of energy, persistent infections (particularly genital thrush or infections of the feet), slow healing minor skin damage and visual problems.

T2DM can sometimes be managed by diet and exercise alone, but if this is not the case then there are a vast number of drugs that can be used in T2DM management. These include metformin, which decreases insulin resistance, and sulfonylureas, which stimulate β-cells to release insulin.

Diabetes is diagnosed by the presence of symptoms, plus:

With no symptoms, a diagnosis of diabetes mellitus shouldn’t be based on a single glucose determination alone. A diagnosis of diabetes has important legal and medical implications for the patient, meaning that a correct diagnosis is essential. A diagnosis should never be made on the basis of glycosuria or a stick-reading of a finger-prick blood glucose alone, although such tests may be useful for screening.

Persistent hyperglycaemia is associated, in some tissues, with the abnormal metabolism of glucose into products that may be harmful to cells. This is because the uptake of glucose into the cells of some tissues, such as peripheral nerves, the eyes and the kidneys, does not require insulin, and is determined instead by extracellular glucose concentration. When a patient is experiencing hyperglycaemia, the intracellular concentration of glucose in these tissues increases, and glucose is metabolised in the following reaction, catalysed by aldose reductase:

An increase in the above reaction depletes cellular NADPH, weakening the defence system of these cells and allowing disulphide bonds to form in cellular proteins, altering their structure and function. In addition, the increased accumulation of sorbitol causes osmotic damage to cells.

Persistent hyperglycaemia is also associated with the increased glycation of plasma proteins. The extent of glycation depends on the glucose concentration and the half-life of the protein. Glycation changes the net charge and 3D structure of the protein, therefore affecting the protein's function. Glucose can react with the terminal valine on haemoglobin to form glycated haemoglobin (HbA1c). The %glycated haemoglobin in the blood can be used as an indicator to detect how effective treatment has been.

Long-term diabetics suffer from a number of macrovascular and microvascular complications, made worse in individuals whose blood glucose is poorly controlled.

There are a wide range of microvascular complications, which are explained below: 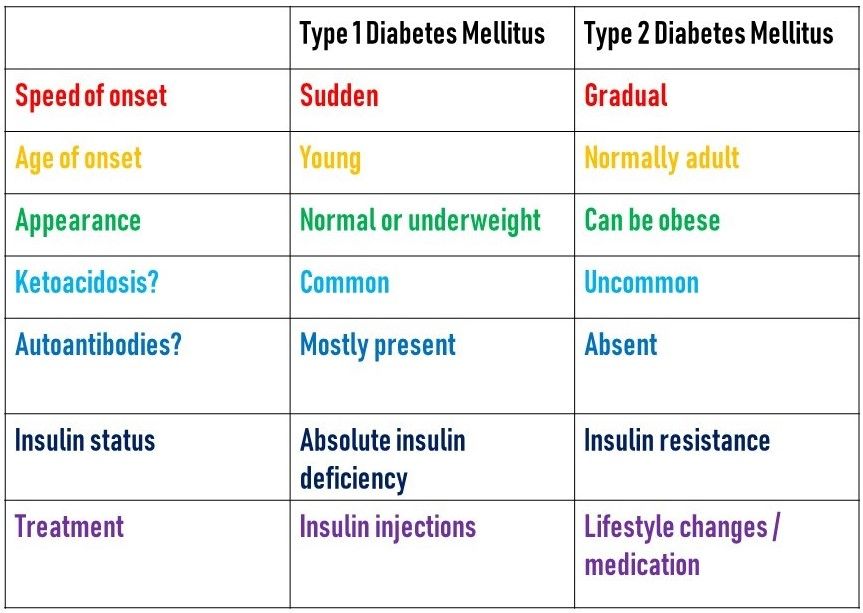 Metabolic syndrome is increasingly prevalent in developed countries, and is present in 80% of people with type 2 diabetes.

It is important to note when diagnosing metabolic syndrome that BMI does not allow for large muscle bulk, and it is known that central fat around the abdomen, not just total body fat collection, is associated with insulin resistance, fatty liver and other symptoms in metabolic syndrome. This means that BMI is not an ideal measurement of central fat.