Next Lesson - Properties of Gas Exchange

In this article, the process of ventilation and the mechanisms involved in inspiration and expiration will be discussed, alongside pathologies that can affect a patient’s ability to ventilate their lungs.

Ventilation is the physical movement of air in and out of the lungs. It can easily be confused with the process of respiration, which is the gaseous exchange of oxygen and carbon dioxide across a membrane either at a cellular level or in the lungs.

Quiet inspiration and quiet expiration occur when a person is unaware of their breathing. There is no extra effort to breathe, just the subconscious drive for oxygen.

At the beginning of quiet inspiration, the external intercostal muscles contract causing the thoracic cavity to move outwards, whilst the diaphragm flattens. Both of these movements are active and increase the space in the thoracic cavity. As the volume increases in the thoracic space, the pressure drops below atmospheric pressure causing air to be drawn into the lungs through the mouth and nose. 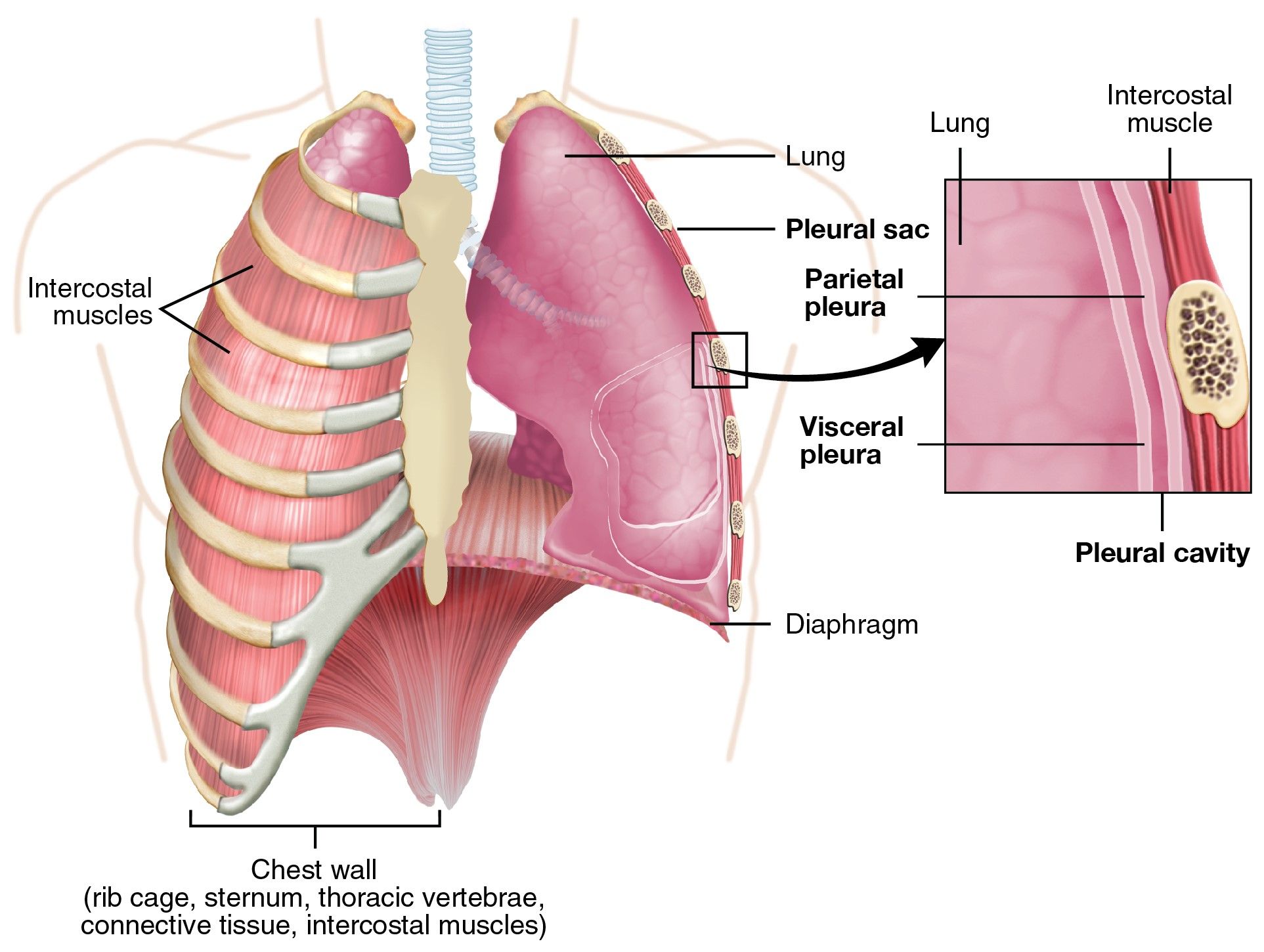 Diagram - The pleura of the lungs

The pleural seal allows the lungs to expand as the thoracic cavity expands.

During quiet inspiration, the main muscle involved in expanding the volume of the chest is the diaphragm, with help from the external intercostal muscles. In contrast, quiet expiration is a passive process and relies on the elastic recoil of the lungs.

Spirometry is a type of pulmonary function test and assesses a patient’s lung volume in a dynamic way, meaning it can track inspiration and expiration. There are lots of different terms used when describing a patient’s spirometry reading and some of these terms can sound very similar, meaning it is important to understand each term. 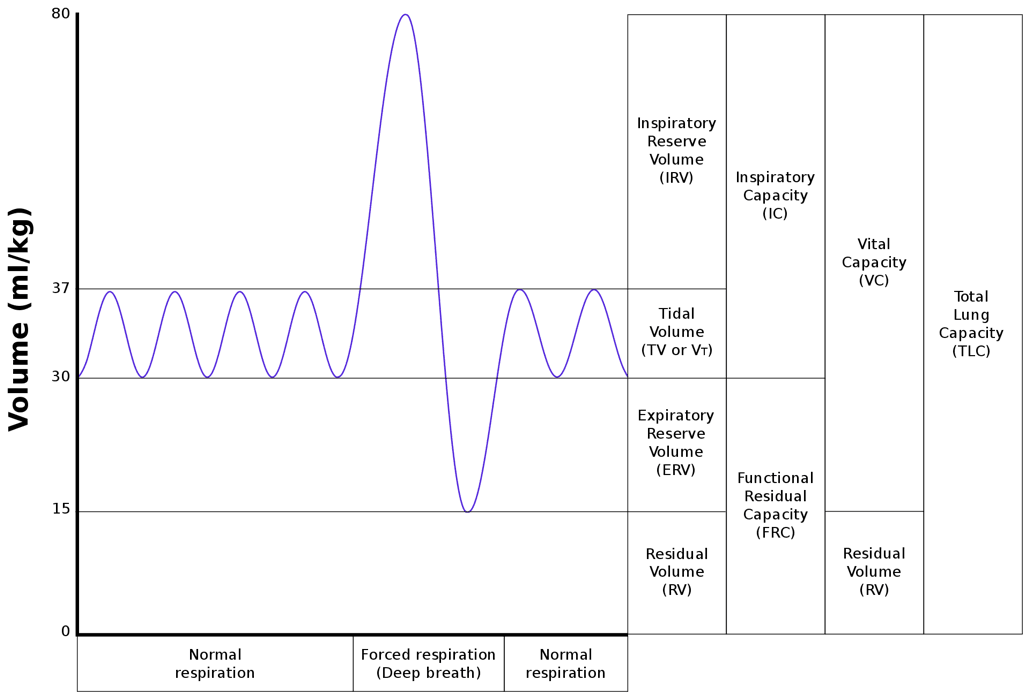 Tidal Volume – the volume of air that enters and leaves the lungs in each breath.

Expiratory Reserve Volume – the volume of air that is the difference between the volume of quiet expiration, and the maximum expiratory volume possible. It occurs when a patient takes a normal breath out and then decreases the volume of the lungs to the minimum capacity possible.

Residual Volume – after forced expiration, the lungs are not completely emptied as air must exist in the lungs for them to stay expanded. The remaining air in the lungs is known as the residual volume.

Lung Capacity – unlike the lung volumes which can change with changes in tidal volume, the capacity of the lungs cannot and are fixed relative to points in the cycle of ventilation.

Inspiratory Capacity – from the end of quiet expiration to the maximum inspiration, and this can be calculated by the addition of inspiratory reserve volume and tidal volume.

Functional Residual Capacity – the volume of air in the lungs at the end of quiet expiration. This can be calculated by the addition of expiratory reserve volume and residual volume

Total Lung Volume – the volume of air present in the lungs after maximal inspiration. This can be calculated by the addition of vital capacity and reserve volume.

Not all the air breathed in is available for gaseous exchange, because a proportion of the air fills the conducting airways. This is an unavoidable ‘waste’ of air and is the same volume at all times, helping to prevent the collapse of airways. This is known as the anatomical dead space.

Damaged or poorly perfused alveoli are not able to perform gas exchange so ventilation to these alveoli is wasted. This volume of air is defined as the alveolar dead space.

During the process of inspiration, energy is used to overcome the resistance present in the airways and to stretch the lungs.

Compliance is the ability of the lungs to expand and stretch. Most of the effort of ventilation is used to stretch out the lungs because the elastic tissue in the lungs wants to recoil.

Surface tension is an important contributor to compliance. The alveolar surface is lined by fluid which generates surface tension, which decreases the compliance of the alveoli, therefore making it harder for the lungs to expand. 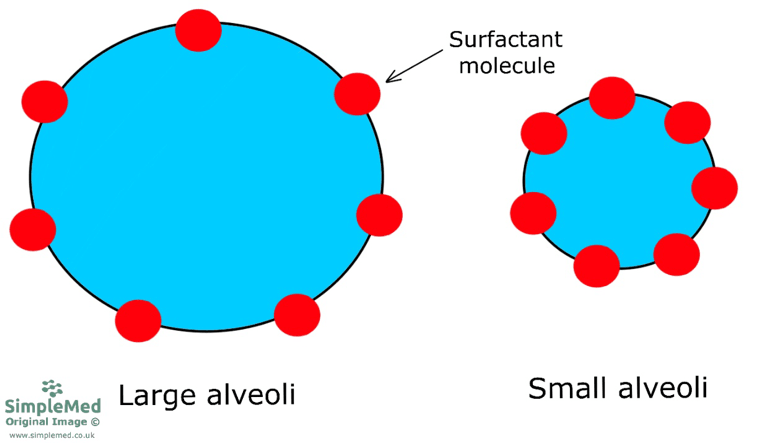 Surfactant aids the expansion of the alveoli, and also acts to stabilise the lungs through the Law of Laplace; defined as Pressure (P) = 2 x Surface Tension (2T) / radius (r). 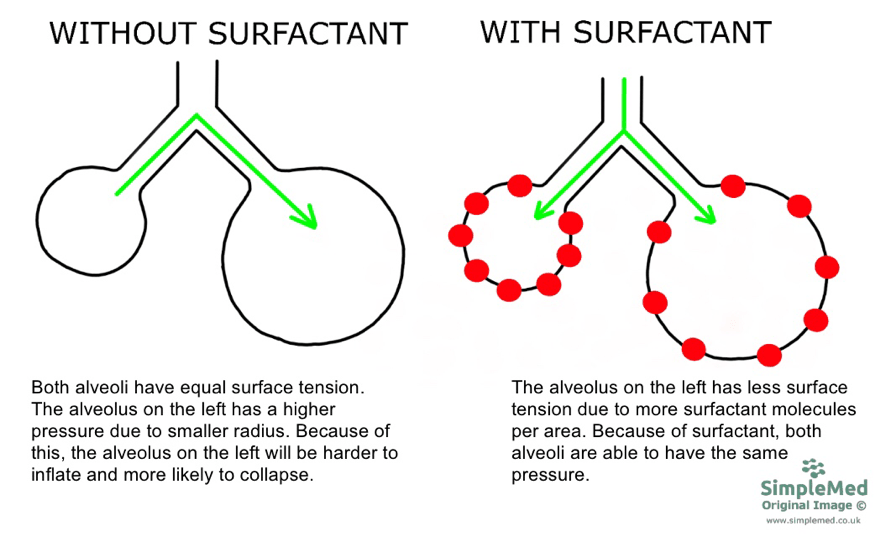 Diagram - The effect of surfactant on stabilising the lungs

Surfactant is only produced in a fetus from week 25 onwards, meaning babies born before the 30th week can lack surfactant. This makes it very difficult to breathe and the baby’s lungs can collapse. This condition is called Respiratory Distress Syndrome. It is managed through external ventilation, providing positive airway pressure to inflate the airways.

Energy is required to force air through the airways of the respiratory system during inspiration and expiration. The most important factors are the radius of the airway and whether the flow of air is turbulent or laminar. 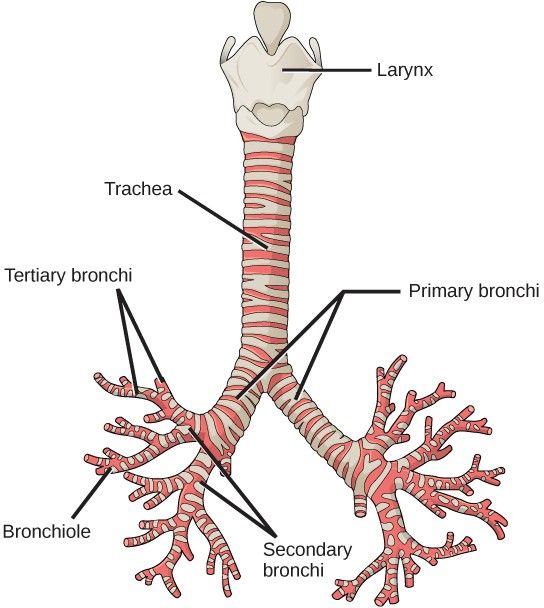 Diagram - The respiratory tract structure from the trachea to bronchiole 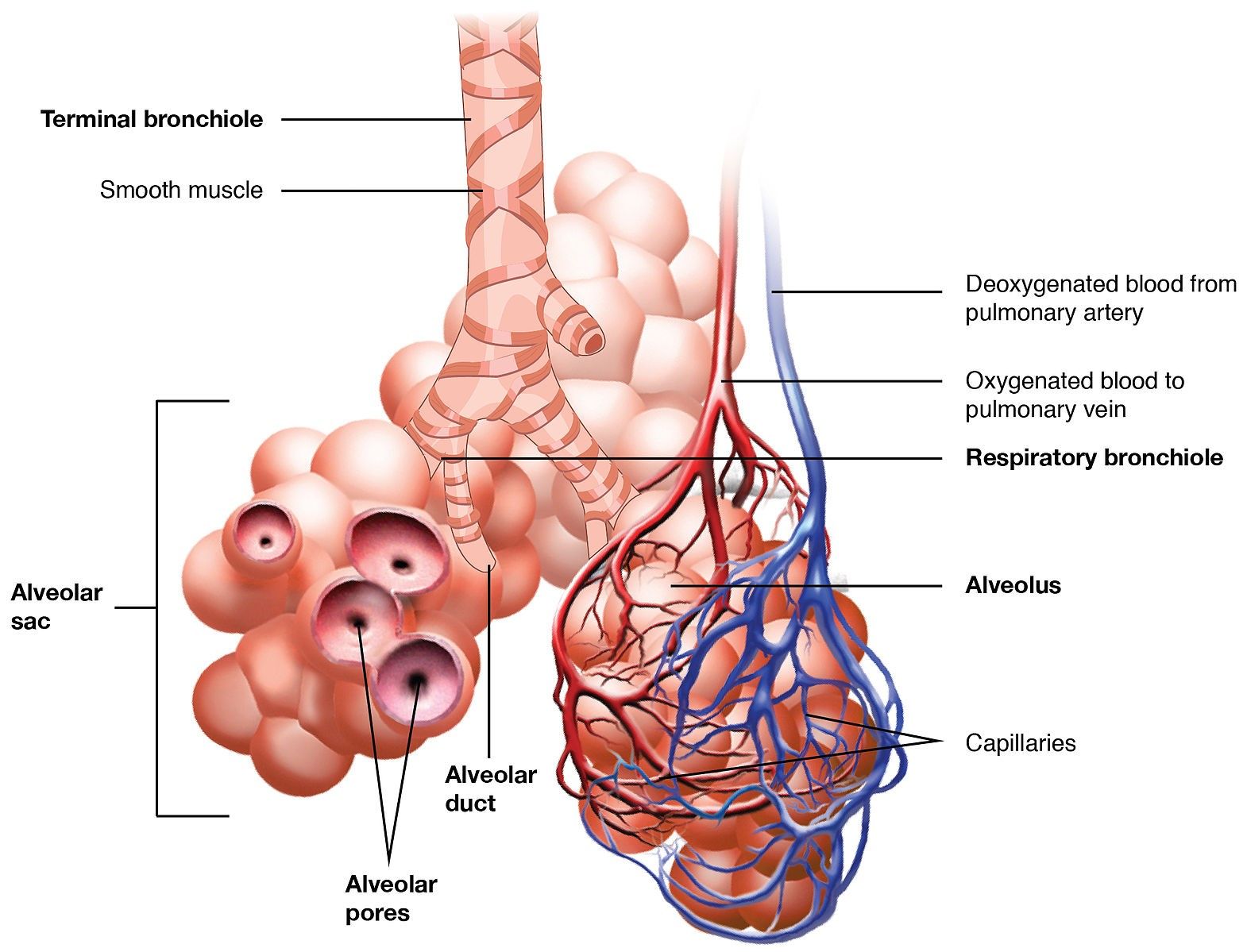 Diagram - The respiratory tract structure from the bronchioles to the alveoli

The resistance to airflow does change during inspiration and expiration depending on the radius of the airways. During inspiration, positive pressure exists in the small airways to allow alveolar expansion, increasing the radius of the airways and decreasing the resistance. During expiration, the opposite is seen, radius decreases and causing increased resistance to airflow.  When a person forcibly expires, the small airways are narrowed increasing the resistance further. This leads to a small volume of air being trapped in the alveoli, unable to be expired – this is the residual volume.

There is a relationship between resistance, pressure gradient and airflow. This is described in Ohms Law, which involves the equation:

This equation describes that an increase in resistance must be accompanied by an increase in pressure gradient to maintain the same airflow to the alveoli. This means that the pressure gradient between the inside of the lungs and outside of the lungs needs to be high to allow air to move. This means the diaphragm and the intercostal muscles need to work hard to allow the lungs to expand and contract.

Disorders of Lung Mechanics and Ventilation

The following disorders we are going to discuss can be defined has having altered lung mechanics and ventilation.

Emphysema is defined as the chronic, progressive destruction of the alveolar wall without fibrosis causing the permanent enlargement of air spaces distal to the terminal bronchiole.

In emphysema, the lack of elastic tissue means the lungs are easier to expand (increased compliance) but will not recoil as easily, which leaves the lungs hyperinflated. There is also a reduced surface area, meaning gas exchange is reduced. Both of these things lead to a ‘barrel chest’ and will reduce the radial traction on the small airways, causing an obstructive pattern on spirometry.

Patients with emphysema will have a reduced exercise tolerance and shortness of breath. This is secondary to the reduced surface area available for oxygen to pass into the blood. 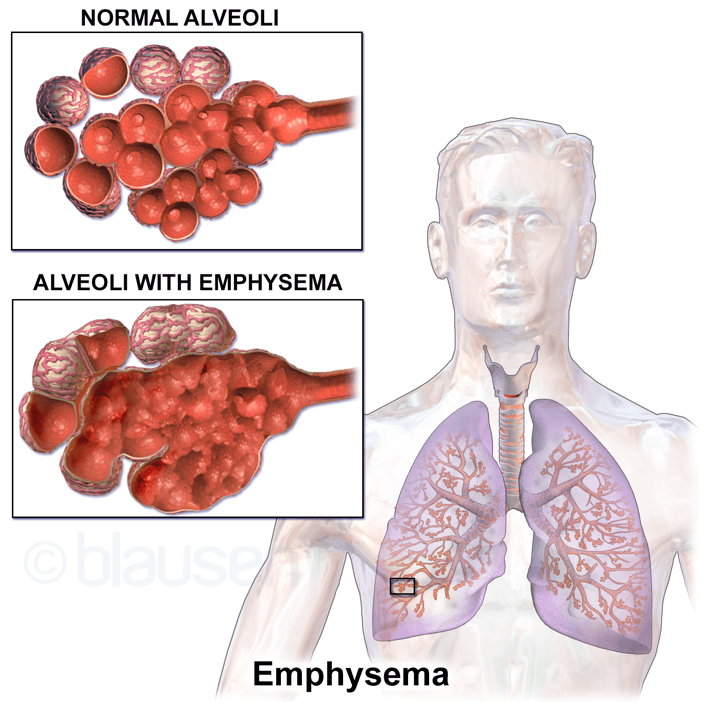 Image - The effects of emphysema on the structure of the alveoli

Asthma is a chronic inflammatory condition of the respiratory airways that is caused by a mixture of genetic predisposition and environmental factors such as allergens and air pollution.

The chronic inflammation presents with smooth muscle contraction and mucosal oedema, leading to narrowing of the airways, particularly in the bronchi and bronchioles. On a spirometry tracing, asthma shows an obstructive pattern just like COPD, but the narrowing can be reversed through the use of corticosteroids and beta-2 receptor agonists such as salbutamol, unlike in COPD.

The interstitial space is found between the capillary basement membrane and the alveolar cells. The space contains collagen fibres, elastin fibres and fibroblasts (synthesise collagen and the extracellular matrix). It is only in diseased states when the space becomes apparent by containing fibrous tissue, fluid or cells.

Interstitial Lung Disease (ILD) can develop idiopathically or have a cause

The pathophysiology of ILD is unclear, however, what is believed is that the alveolar epithelial cells become damaged due to an irritant (asbestos for example). The body increases the production of fibroblasts as a way to repair the damage by laying down scar tissue in the interstitial space. The increased amount of fibrotic tissue surrounding the remaining alveoli makes it harder for the alveoli to expand, therefore the compliance of the lungs decreases. The collagen is not very stretchy but tends to recoil meaning the elastic recoil of the lungs increases and the lungs become smaller as a result. The increased amount of collagen and extracellular matrix leads to an increased diffusion distance for gases moving from the alveolar spaces into the blood. This has a greater effect on the diffusion of oxygen than carbon dioxide, because carbon dioxide is more soluble.

When examining a patient with ILD, chest expansion will be reduced, and respiratory rate will be increased to supply enough oxygen to the body, which leads to a reduced exercise tolerance.

A pneumothorax is the presence of air in the pleural space caused by a disruption to the pleural membrane. It can develop spontaneously or following injury to the chest wall e.g. fractured rib, or rupture of air-filled cysts found on lung tissue.

As a pneumothorax can happen suddenly, it can present with acute, sharp pleuritic pain and breathlessness.

Atelectasis refers to the complete or partial collapse of one lobe of the lung. It is caused by the presence of an obstruction (like a tumour, mucus plug or foreign object) in the airways, preventing the alveoli from ventilating. The air distal to the obstruction is reabsorbed, collapsing that lobe of the lung.

Surgery can also lead to atelectasis. The anaesthesia, pain relief used, intubation and sedatives can lead to the patient’s breathing becoming shallower, meaning the alveoli may not inflate adequately and causing them to collapse.