Next Lesson - All finished here! Check out our other subjects.

To gain a brief understanding of the functions and regulation of calcium.

Calcium is one of the most important ions in the body, having many functions:

The majority of calcium found in adults is stored in bone as hydroxyapatite crystals. The skeleton is a major reserve of calcium, and acts to buffer serum calcium levels through releasing calcium phosphate into the interstitium when required (serum calcium levels are normally between 2.2-2.6mM). Dairy is the main source of dietary calcium.

In plasma, calcium exists in one of three forms;

Three hormones are involved in the regulation of calcium: parathyroid hormone, calcitriol, and calcitonin.

Parathyroid hormone (PTH) functions to raise serum calcium levels when there is an acute fall in plasma calcium concentration. PTH is a straight chained polypeptide that begins as a pro-pre-hormone before being cleaved. Its synthesis is regulated at a transcriptional and post-transcriptional level, where low serum calcium levels upregulate PTH gene transcription and high serum levels prolong it (through the prolonged survival of mRNA). The half-life of PTH is around 4 minutes. It is produced by chief cells in the parathyroid gland, and cleaved in the liver. It is continually synthesised, but little is stored as it is often degraded by chief hormone. The specific functions of PTH include decreasing calcium loss in the kidney, activating of vitamin D (which increases cellular Ca2+ uptake in the GI tract), and increasing resorption of calcium to bone.

Parathyroid hormone related peptide (PTHrP) is a peptide produced by some neoplastic tumours which may lead to hypercalcaemia. It is commonly produced by patients with breast or prostate cancer, and occasionally in patients with myeloma. It functions similarly to PTH, causing increased calcium release from bone, and reduced renal calcium excretion. The presence of hypercalcaemic symptoms can be a red flag for cancer.

Calcitriol (1,25-dihydroxycholecalciferol) has the same function as PTH, but acts over a longer period of time, instead of during acute calcium loss. Calcitriol is an active form of vitamin D, which can be obtained from sun exposure, food, and supplements, and is biologically inert, so must undergo two hydroxylation reactions (1, 25) in the body to become activated.

Calcitonin is found in the parafollicular cells of the thyroid gland, and acts to oppose to PTH in order to lower calcium levels when serum calcium levels are increased. There is also some suggestion that, during pregnancy, calcitonin may help preserve the maternal skeleton. 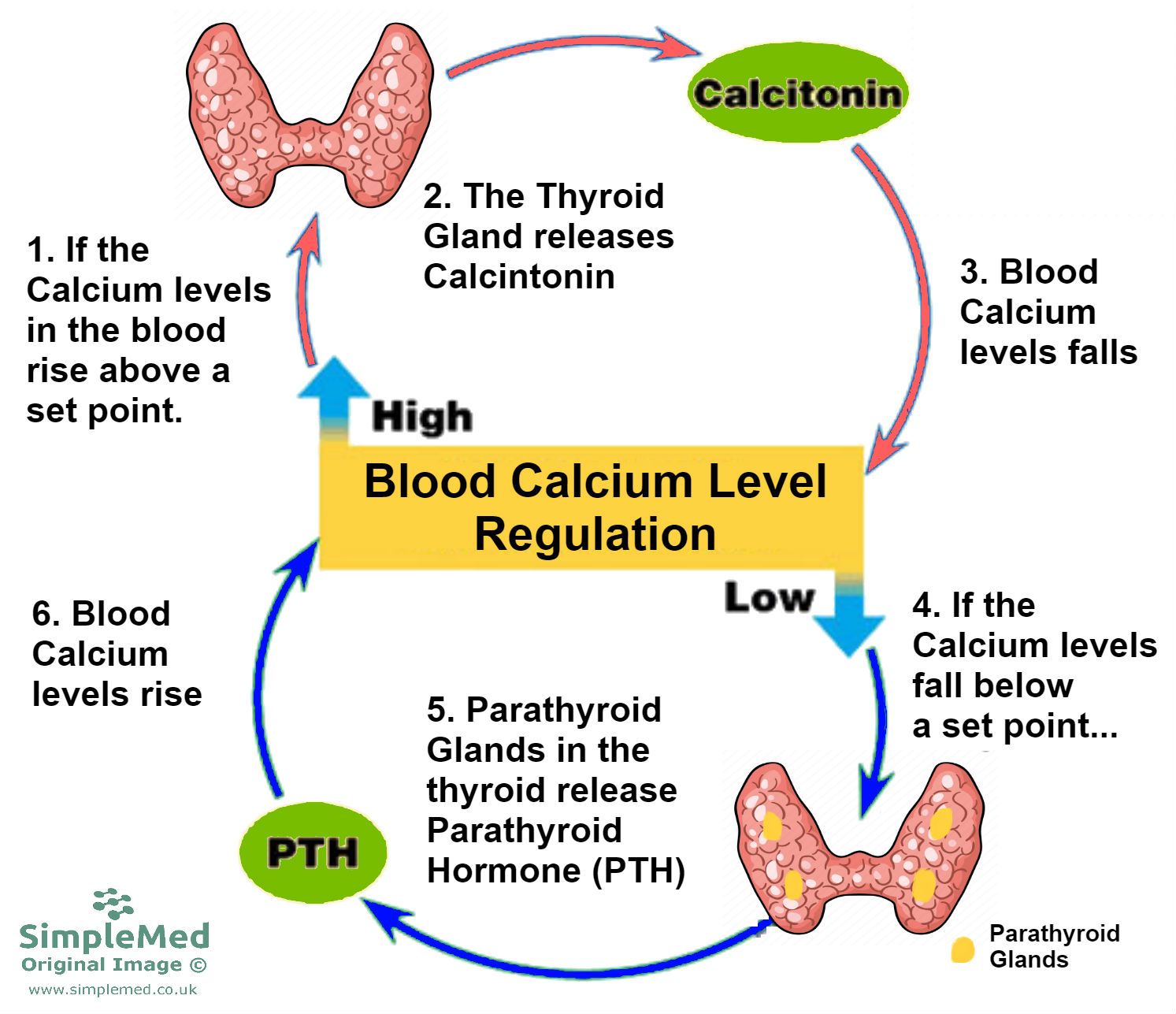 Hypocalcaemia causes hyper-excitability of the neuromuscular junction. Symptoms include pins and needles, tetany, paralysis, and convulsions.