Nitrogen is an important molecule within the body. It is used in DNA/RNA, neurotransmitters, and hormones. Therefore humans need a constant supply. The main source of nitrogen is supplied by protein in the diet as they are broken down into amino acids and then absorbed at the intestinal wall.

Nitrogen balance can be:

In addition to being used in protein synthesis, amino acids can have special functions of their own. For example, glycine and glutamate are both amino acids and important neurotransmitters.

Amino acids are also needed for the production of other chemicals in the body:
There are three different types of amino acid:
While this list does not include every amino acid of each type, it is helpful to remember one or two examples, an easy way to remember this is:

Unfortunately, not all amino acids fit this pattern, such as phenylalanine which is ketogenic (important, see later).

Because amino acids can be liberated from proteins and used for energy, their storage needs to be carefully controlled by hormones.

To be used in the production of energy, amino acids have to have their amino group removed so that only carbon skeletons remain. This can be done in two ways:

Transamination is the process that swaps the amino group (NH2) on an amino acid for a carboxyl group (C=O). This can be done through two enzymes called alanine aminotransferase (ALT) and aspartate aminotransferase (AST). Both of these reactions are reversible, meaning they can be used to produce amino acids (alanine or aspartate from glutamate) or substrates for energy production (pyruvate or oxaloacetate).

The second method of producing energy from amino acid metabolism is through deamination. This involves the liberation of the amino group as free ammonia, which is eventually turned into urea through the urea cycle.

Urea and the Urea Cycle

Urea is a molecule in the body with a high nitrogen content that is chemically inert in humans (meaning it doesn’t react with anything). It is produced primarily following deamination of glutamate in the liver which releases ammonia. As ammonia is toxic to human cells, it is converted to urea which is a safer (insoluble) waste product which is released in the urine.

Ammonia is converted to urea during the urea cycle, a process involving 5 liver enzymes. The urea cycle consists of four enzymatic reactions: one mitochondrial and three cytosolic. 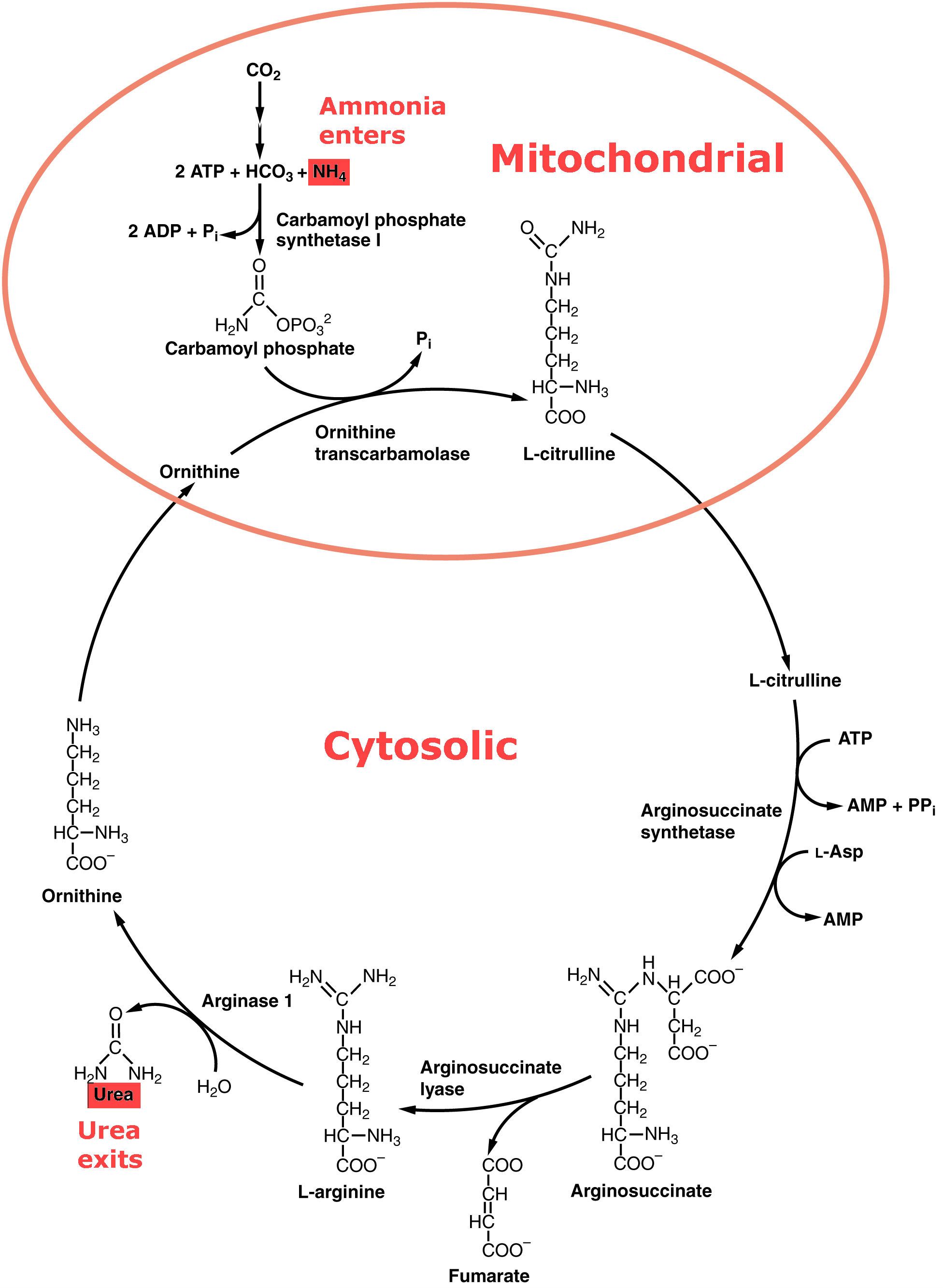 Diagram - The Urea Cycle with enzymes and products. A knowledge of the enzymes is not necessary, but understanding that they can be up/down-regulated and how this might affect the production of Urea from Ammonia is

Having a high protein diet (meaning there are a lot of amino acids to metabolise), means that the enzymes for the urea cycle are upregulated, so the increased amount of protein can be metabolised faster and so no ammonia builds up.

Having a very low protein diet such as in starvation can lead to down-regulation of these enzymes because they are not needed to metabolise protein.

Having a low protein diet for extended periods of time is dangerous as it can contribute to Refeeding Syndrome when too much protein is consumed within 4-7 days after the malnutrition period.

This leads to the massive attempted synthesis of glycogen, fat and protein in cells and causes largely deranged levels of potassium, magnesium and phosphorus in the blood. Although refeeding syndrome has multiple contributors, ammonia build up also plays into its pathogenesis. When protein intake is low, the enzymes of the urea cycle are downregulated, meaning that when protein is consumed again the enzymes are overwhelmed and cannot convert ammonia into urea fast enough causing ammonia to build up (hyperammonaemia). High ammonia is harmful because it interferes with the Krebs Cycle, the blood-brain barrier, protein synthesis and pH. Ammonia is basic, meaning it can also affect local pH.

Cardiac, pulmonary and neurological symptoms can occur due to refeeding syndrome and the low serum levels of potassium, magnesium and phosphorus, if severe enough, can be fatal.

Similar symptoms and pathophysiologies can also happen in genetic deficiencies of the enzymes of the urea cycle, but these can be managed with a low protein diet.

There are many other disorders that occur due to inadequate levels of enzymes needed to metabolise amino acids.

Phenylketonuria (PKU) is a deficiency in phenylalanine hydroxylase meaning phenylalanine cannot be converted to tyrosine. This causes phenylalanine to build up in the blood, and with transamination, so do phenylketones (as phenylalanine is a ketogenic amino acid). Symptoms include developmental delay, small head, seizures and hypopigmentation. PKU along with othern inborn errors of metabolism are tested for in the blood test all newborn babies must undergo, called the heel prick test. This means it is often caught and treated early in the UK. The management for phenylketonuria is a low phenylalanine, high tyrosine diet.

Homocystinuria is another syndrome due to enzymatic deficiency. Homocysteine (with an ‘e’) is made from methionine and is normally broken down by cystathionine beta-synthase. In Homocystinuria this enzyme is deficient, meaning that methionine cannot properly be broken down, so homocysteine (with an ‘e’) builds up in the blood, and is oxidised to homocystine (without an ‘e’ - this is two homocysteine molecules bound together). This homocystine (without an ‘e’) is excreted in the urine. The symptoms of homocystinuria can sometimes be confused with Marfan’s Syndrome, because it presents with the similar symptoms of lens dislocation, skeletal deformities, and defective connective tissue. However, Marfan’s Syndrome would not present with high blood levels of homocystine. Homocystinuria is also assessed for in the heel prick tests in newborns.

It can sometimes be confusing with all of the words that sound the same, so I have included a little list for clarity:
Edited by: Ben Appleby and Marcus Judge
Quiz