Next Lesson - Thrombosis and Embolism

Describe the principles of haemostasis and the critical steps in the clotting cascade including:

Haemostasis (not to be confused with homeostasis) comes from haemo (pertaining to blood) and stasis (to halt) and thus literally translates to halting blood. It is an essential process in the moments after vessel injury that prevents small wounds from becoming fatal.

The Three Steps of Haemostasis

Below are the aspects of haemostasis and clotting in more detail. 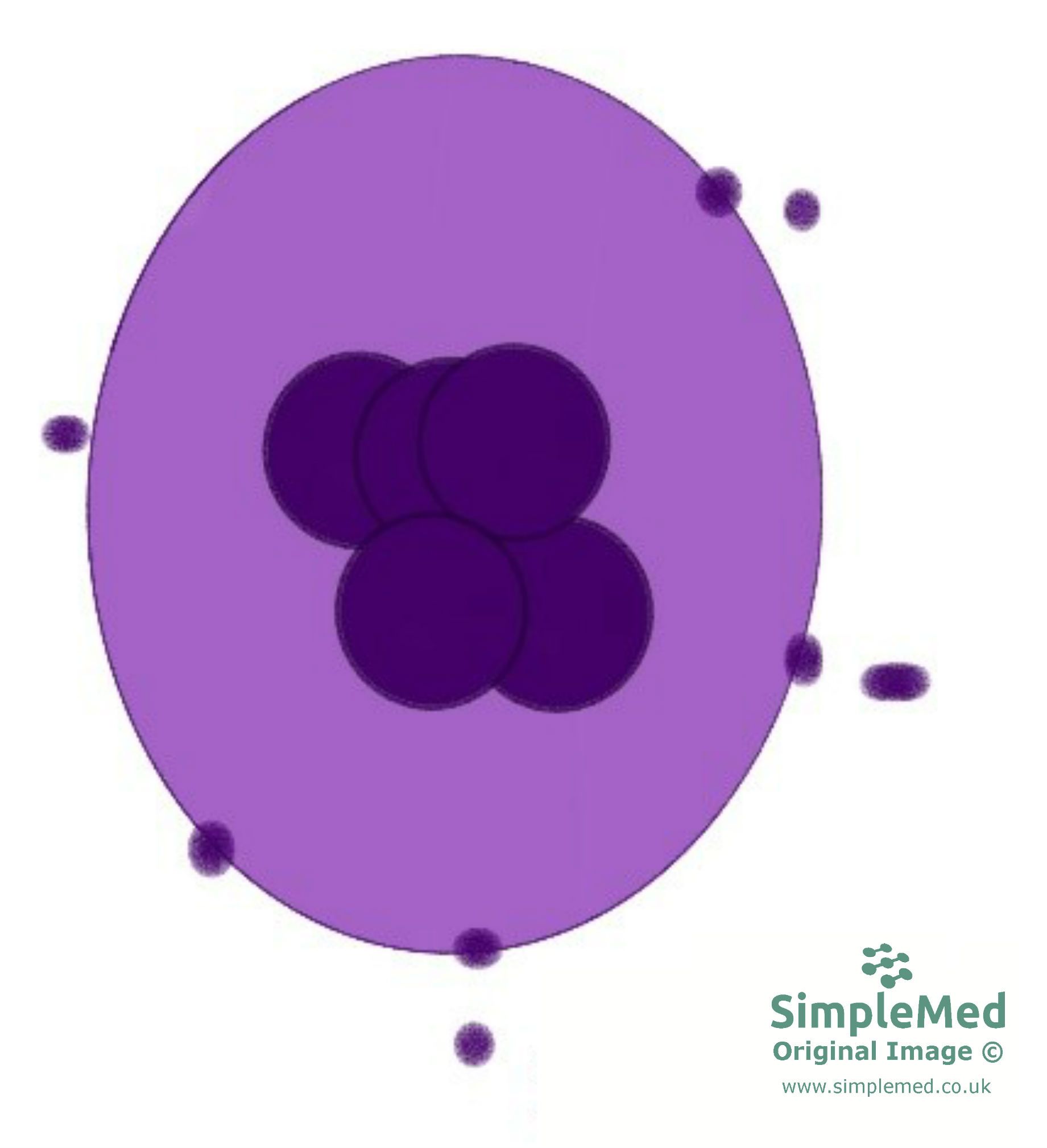 Platelets can be activated in numerous ways:

Once activated, platelets will adhere to von Willebrand factor (vWF), which is concentrated on the subendothelial basement membrane of blood vessels. They will then proceed to aggregate with other platelets, growing the haemostatic plug. The platelets are cross linked by a clotting factor called fibrin formed in the clotting cascade (explained in more detail below) which will form a mesh structure to reinforce the platelet plug. Once a platelet is activated, it will secrete factors which recruit more platelets such as ADP and thromboxane A2.

For blood to clot, fibrin is needed which are threads of protein that can cross-link to form a fibrin mesh. This mesh catches platelets and holds the blood clot together to strengthen the platelet plug. The formation of fibrin is achieved via the clotting cascade, which is shown in the diagram below. 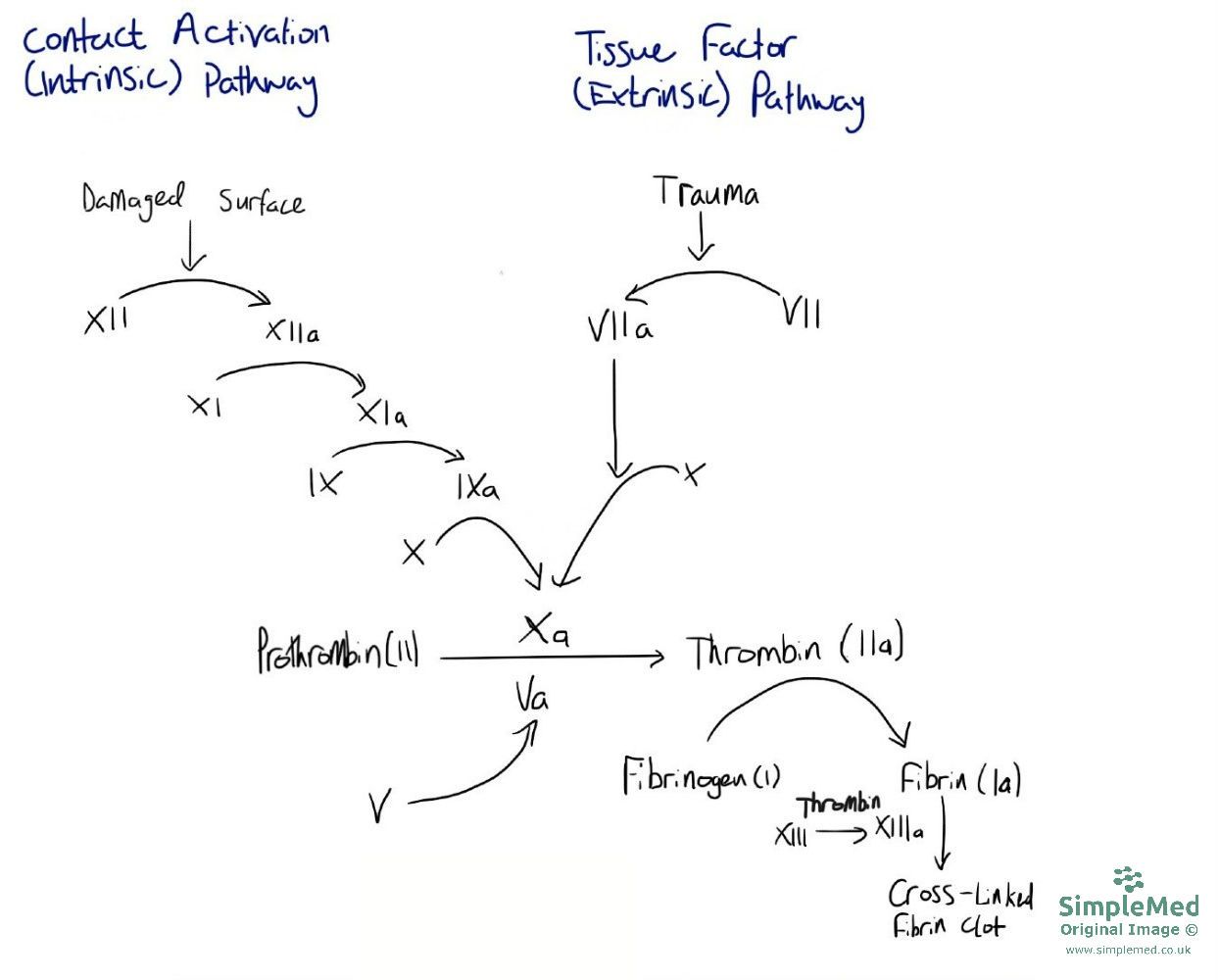 Diagram - The clotting cascade. It can be activated by two different pathways: the intrinsic and extrinsic pathways. The two pathways come to the same result which is the formation of fibrin from fibrinogen used to cross-link platelets and form the platelet plug

PT can also be expressed by the international normalised ratio (INR) which compares the PT to a normal value in the form of a ratio. For example, an INR of 1 is normal, and blood with an INR of 3 will clot more slowly, for example if a patient is on warfarin.

There is an additional measurement which can be done to investigate clotting which is measuring how long the patient bleeds for after a break to the skin. A longer bleeding time (BT) suggests a problem with platelet aggregation. 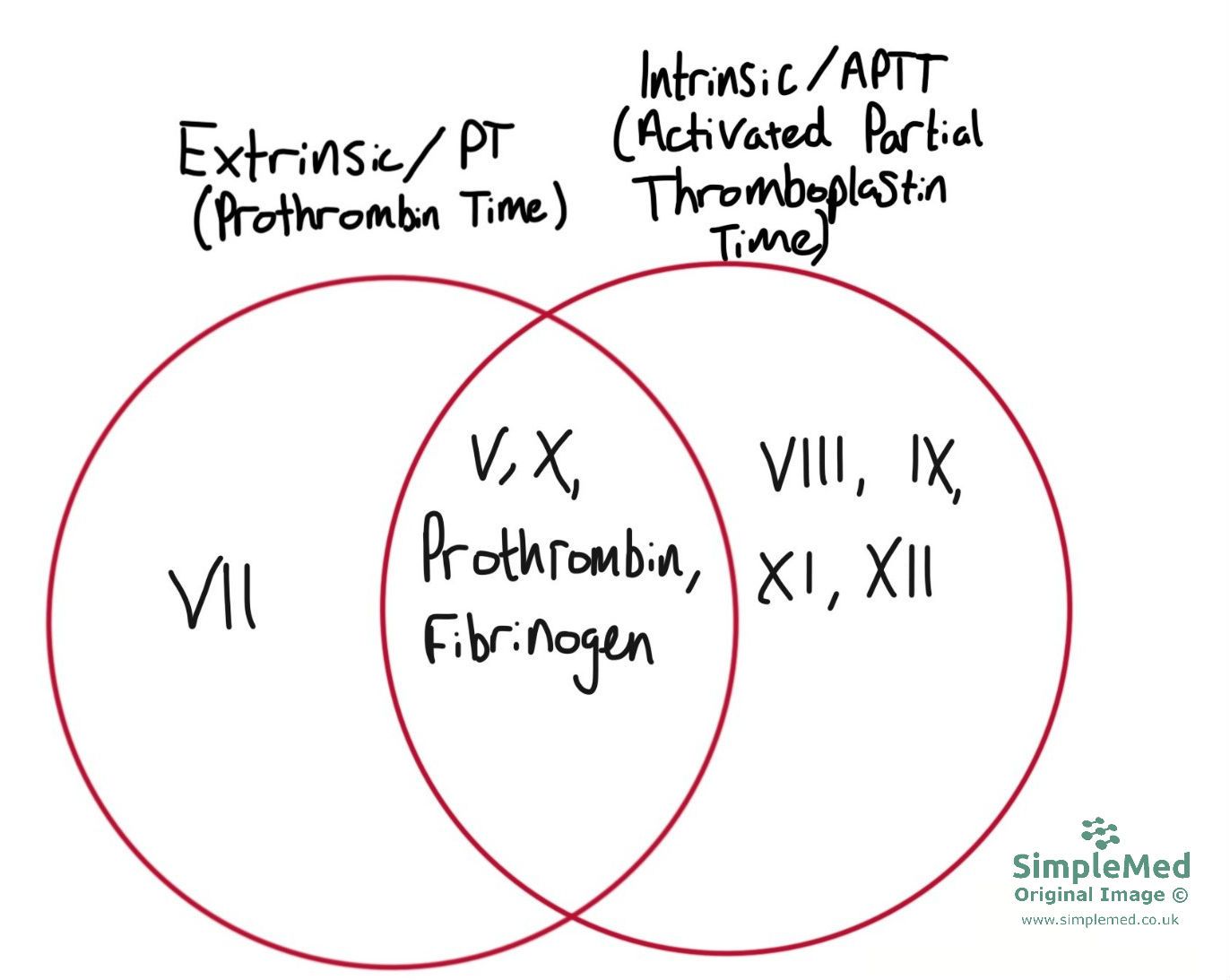 As platelets in the clot die, they will shrivel, pulling fibrin by its actin-myosin filaments as they do so. As a result of this, the edges of the wound to which the clot has adhered are drawn together to a certain extent. This is wound contraction, a part of the healing process of the blood vessel.

The endothelium secretes a substance known as plasminogen which is converted to plasmin by tissue plasminogen activator (tPA). The activity of tPA is increased by the presence of fibrin. Plasmin is the major enzyme of the fibrinolytic system and destroys clots by degrading fibrin. Fibrin degradation/split products released in this process also inhibit clotting. This system ensures that clots do not persist beyond the time for which they are needed.

Disseminated intravascular coagulation is a pathological activation of the coagulation cascade. In DIC, clotting activators enter the systemic circulation and many microthrombi (small pathological clots in the vessels) are formed throughout the circulation. During this process many coagulation factors and platelets are consumed.

When enough of these clotting factors have been used, haemorrhage can begin to occur as the body has no more platelets or clotting factors to form clots when they're actually needed. The affected patient is at risk of bleeding, neurological impairment, gangrene, renal failure, respiratory distress and a wide variety of other complications. Red blood cells are often damaged in DIC as they are sheared by flowing past the microthrombi, and between this and haemorrhage the patient can develop anaemia.

Triggers for DIC can include malignancy, massive trauma (e.g. burns), infections, massive haemorrhage, and transfusion. Although in the short term DIC can be managed by transfusing the patient with clotting factors and platelets, in order to truly treat the condition, the underlying cause must be treated first.

Both varieties of haemophilia are X-linked recessive and are therefore much more common in males than in females. Haemophilia A and haemophilia B are clinically indistinguishable from one another, with both having normal bleeding time and PT but prolonged APTT (factor VIII and IX are used in the intrinsic pathway causing the APTT to be prolonged, but neither factor is involved in the extrinsic pathway so PT is normal).

Haemophilia A is either a deficiency of the amount of factor VIII, or reduced factor VIII activity It is the most common hereditary disorder associated with serious bleeding.

Individuals with mild haemophilia A may experience prolonged bleeding after major trauma or surgery, and after venepuncture. In more severe cases, patients can present with spontaneous bleeding into joints (haemarthrosis), intramuscular haemorrhage and, in severe cases, intracranial haemorrhage.

Mild or moderate symptoms of haemophilia A are seen with 6-50% of normal factor VIII function or amount, while the severe form of the disease is seen with under 1% of factor VIII.

Patients with haemophilia A can be managed through infusion of recombinant factor VIII.

Haemophilia B is a deficiency in factor IX, and presents with similar symptoms to haemophilia A, but with an increased risk of bruising and experiencing mucosal bleeds. It can be treated through an infusion of recombinant factor IX.

Von Willebrand disease is the most common inherited bleeding disorder and can range in nature from asymptomatic to severe. Von Willebrand factor is either deficient or abnormal in this condition.

The function of this protein includes protecting factor VIII from premature destruction and assisting in the formation of the platelet plug. Both bleeding time and APTT can be affected by this condition.

Features include bleeding following minor trauma or surgery, epistaxis and menorrhagia. Bleeding into muscles and joints is rare.

Thrombocytopenia is a condition in which the platelet count is less than 100 x109/L. In this condition the bleeding time is affected, but the PT and APTT remain unaffected, as these are an indicator of clotting cascade function.

Patients with thrombocytopaenia can present with petechiae, which are small red or purple spots under the skin; these occur due to spontaneous bleeding from capillaries.

Thrombocytopenia has a variety of causes such as autoimmune thrombocytopenic purpura, DIC, liver failure or drugs such as heparin.

Thrombophilia can due to be congenital or acquired defects of haemostasis that lead to an increased chance of thrombosis (pathological blood clotting).