Iron is an important element in the normal functioning of the body where it is used as a component of haemoglobin and myoglobin for oxygen transport, and as a co-factor in detoxification, respiration and metabolic pathways.

Iron is obtained from the diet and is recycled within the body. Iron deficiency can be due to insufficient iron in the diet, loss of iron in blood (e.g. menstruation or a gastric ulcer) or functional iron deficiency in chronic disease (when less iron is released from the body's stores). The body has no way to eliminate iron, meaning that a build up of iron can also be dangerous. This is seen in conditions such as hereditary haemochromatosis, or in patients receiving many blood transfusions and can lead to organ damage.

In the body, iron is mostly found in one of two oxidation states: ferrous (Fe2+) and ferric (Fe3+) iron.

Iron is taken in through diet in two forms; haem and non-haem. Haem is made up of Fe2+ ions and is found in meat such as beef, liver and chicken, whereas non-haem is both Fe2+ and Fe3+, and is found in raisins, oats, spinach and fortified cereals. Iron must be in the ferrous form to be absorbed in the duodenum and upper jejunum.

Iron absorption is inhibited by some chemicals found in everyday food items; i.e. tannins in tea/red wine, or phytates found in chapattis. This works by binding non-haem iron in the intestine so that it cannot be absorbed. Note that antacids can also reduce iron absorption. On the other hand, vitamin C found in citrus fruits can help increase the absorption of iron by reducing ferric to ferrous iron. This is why patients on iron supplements are encouraged to take their tablets with a glass of orange juice. 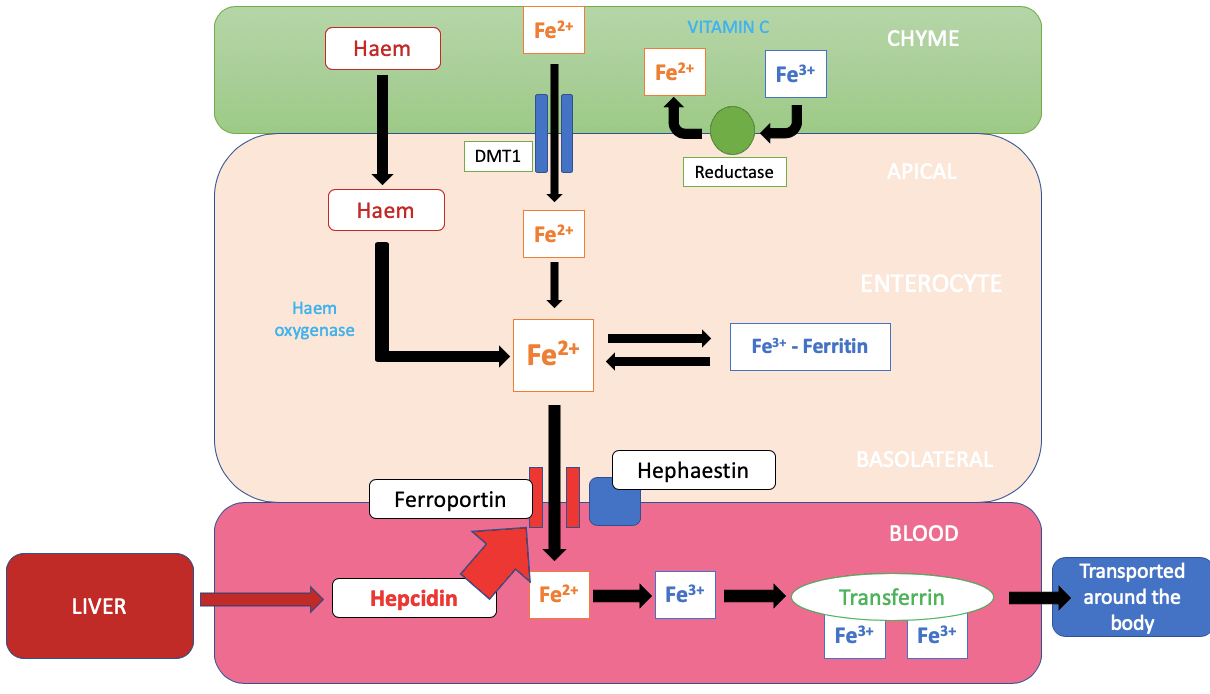 Diagram: Shows the absorption of non-haem iron in the duodenum and jejunum. Fe2+ and haem iron can be absorbed easily, while Fe3+ has to be reduced before being absorbed. Iron can be stored in the enterocytes as ferritin, or released into the blood bound to transferrin

The conversion into the ferrous form of iron happens via the reductase enzyme on the apical surface of the enterocytes lining the bowel. The Fe2+ ions are taken up by a transporter protein DMT1 into the enterocyte. Haem iron is taken up by a separate poorly understood process.

Once the Fe2+ is within the enterocyte it can be stored as ferritin (a soluble iron & protein complex) in the form of Fe3+, or transported into the bloodstream by the protein ferroportin. The Fe2+ needs to be oxidised back into ferric (Fe3+) iron by an enzyme called hephaestin. Now in the correct form, the ferric iron is bound by transferrin and so can be transported around the body to sites where it is needed, in particular to bone marrow where erythropoiesis takes place. (see haematopoiesis and the spleen article).

When the Fe3+ iron bound to transferrin reaches the target cell, it binds to a transferrin receptor on the cell surface membrane and causes the process of receptor-mediated endocytosis to occur. The Fe3+ is reduced to Fe2+inside its endosome. Following this, it is transported into the cytoplasm through the same DMT1 transporter as on the enterocytes in the gut. Once in the cytoplasm, mitochondria can utilise it to produce cytochrome enzymes. Unused Fe2+ is stored in cells as the protein ferritin, which is able to release iron in a controlled manner when needed, after which the Fe2+ can leave via the transporter ferroportin.

Iron is stored in two different forms: the previously mentioned  usable and soluble ferritin form within cells (which allows iron to enter and leave through pores in the iron-protein complex) and the insoluble hemosiderin form which consists of ferritin complexes clumped together. The latter often accumulates in macrophages in the liver, bone marrow and spleen.

Most of the iron in the body is obtained from recycling old erythrocytes, which explains the limited requirement of iron in our diet. The erythrocytes are phagocytosed by macrophages in the reticuloendothelial system, returning the iron to the blood via transferrin, or storing it within the macrophage as ferritin.

Iron absorption needs to be regulated carefully as both a deficiency and an excess of iron can be harmful to the body. The balance is maintained through regulation of absorption, bodily stores of iron and the rate of erythropoiesis. Note there is no active mechanism for the excretion of iron from the body! The enterocytes sense the iron levels being absorbed from diet and adjust the channel protein transcription accordingly.

Absorption of iron is regulated by hepcidin, a small protein made by the liver which can bind to and cause the degradation of ferroportin and also inhibits DMT1 gene transcription. Overall, hepcidin inhibits dietary iron from entering the blood stream. The synthesis of hepcidin is increased during iron overload to reduce the levels taken in. Conversely its synthesis is decreased when there is an increased rate of erythropoiesis. This enables the bone marrow to be supplied with enough iron to produce new erythrocytes.

Excess dietary absorption of iron can occur with conditions such as hereditary haemochromatosis; an autosomal recessive condition that causes accumulation of iron in tissues & organs such as the liver, heart, and endocrine glands. This accumulation of iron can promote the formation of reactive oxidation species via the Fenton reaction. These free radicals can cause damage to proteins and DNA within cells. The disease is caused by a mutation in the gene coding for the HFE protein, which usually reduces the affinity of the transferrin receptor on target cells. The mutated protein cannot interact with the receptor and so increased levels of iron enters the cells leading to accumulation. The accumulation of iron leads to the skin looking tanned along with causing secondary conditions such as cardiomyopathy and diabetes mellitus – hence its common name, bronze diabetes.

Another method through which iron accumulations can occur is transfusion associated haemosiderosis. This is a condition that occurs when repeated blood transfusions are given to a patient for treatment of conditions such as transfusion dependent anaemias (e.g. thalassaemia and sickle cell anaemia). Each unit of transfused blood contains approximately 250mg of iron, therefore with repeated transfusions, iron levels can quickly build up in the body putting the patient at risk of secondary conditions listed above. Haemosiderin deposition can lead to characteristic slate grey colouring of the skin. Desferrioxamine, an iron chelating agent can help to delay the overload but cannot prevent it. These conditions are primarily treated using therapeutic phlebotomy – bleeding to remove the excess iron in the body (where standard phlebotomy has not been appropriate cases have been recorded where leeches have been used!).

Iron deficiency is a very common disorder making up half of anaemias. It is always a sign of an underlying condition rather than a diagnosis in itself! There are lots of possible causes for it which can be categorised as below:

High risk patients include menorrhagic (heavily menstruating) women and infants who are being weaned off the breast onto solid foods.

Most of the signs and symptoms of iron deficiency relate to the decreased ability to carry oxygen around the body. See anaemia article for the presentation of anaemias. More specific epithelial changes can occur with chronic iron deficiency: 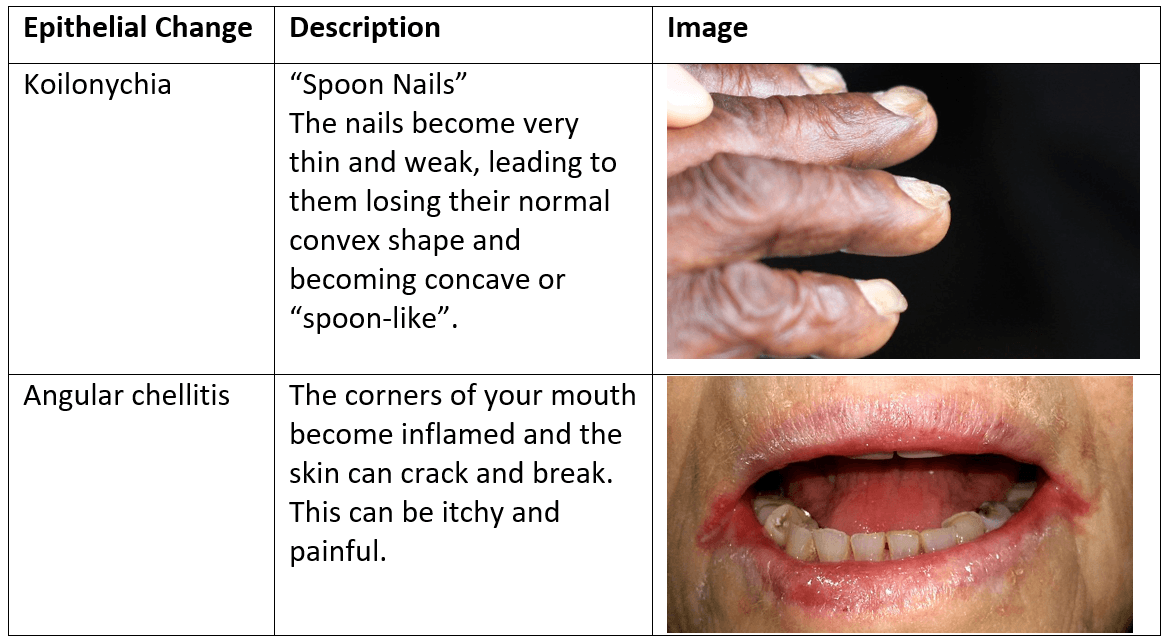 Iron deficiency anaemia is diagnosed through full blood counts and blood films. A low MCV (mean cell volume), MCH (mean corpuscular haemoglobin) and %transferrin solution (a value which represents how much of the iron in the plasm is bound) will be seen along with low plasma ferritin and iron levels. An elevated platelet count, TIBC (total iron-binding capacity) and white cell count may also be seen. Note that if a normal or increased ferritin is present then that does not rule out the possibility of iron deficiency, as levels can increase in various infections and co-morbidities. On a blood film you wold see microcytic and hypochromic cells with evidence of anisopoikilocytosis (irregularly sized and shaped cells). (See full blood count and blood films article for definitions of these terms).

Ferrous sulphate/fumarate is usually given as an oral iron replacement treatment alongside dietary advice. These together work to increase the body’s iron stores back to a normal level. Transfusions are only given in the most severe cases of anaemia.