Next Lesson - We're all done here! Check out our other subjects!

The head and neck regions contain many very complicated structures. There are numerous vessels, nerves and muscles that are designed to facilitate the many functions of the head and neck.

Divisions of The Neck

The neck is the structure from the lower margin of the mandible to the upper border of the clavicle and is the pathway for structures to enter and leave the head.

Nature has compartmentalised structures using layers of cervical fascia, thin layers of connective tissue that form barriers between structures in the neck. There is one superficial fascia and three deep fascia.

There is a superficial fascial layer just below the skin, housing the jugular veins, superficial lymph nodes and the platysma muscle. On the image below, it is not labelled, but would run in the beige coloured soft tissue that surrounds the neck.

The investing layer of the deep cervical fascia is the most superficial of the three. It surrounds the neck like a collar and holds within it the sternocleidomastoid and trapezius muscles, and the submandibular and parotid salivary glands. On the image below, this layer is shown in orange.

The prevertebral layer of the deep cervical fascia forms a sheath for the vertebral column and muscles associated with it. In the image below, it is shown in pink.

The buccopharyngeal fascia is a small portion of fascia that connects two parts of the pretracheal fascia to form a pocket containing the oesophagus and the trachea. It allows for the formation of the retropharyngeal space, a deep neck space that sits behind the buccopharyngeal fascia. Infections that develop in this space have the ability to extend into the thorax, potentially causing a life-threatening mediastinitis. 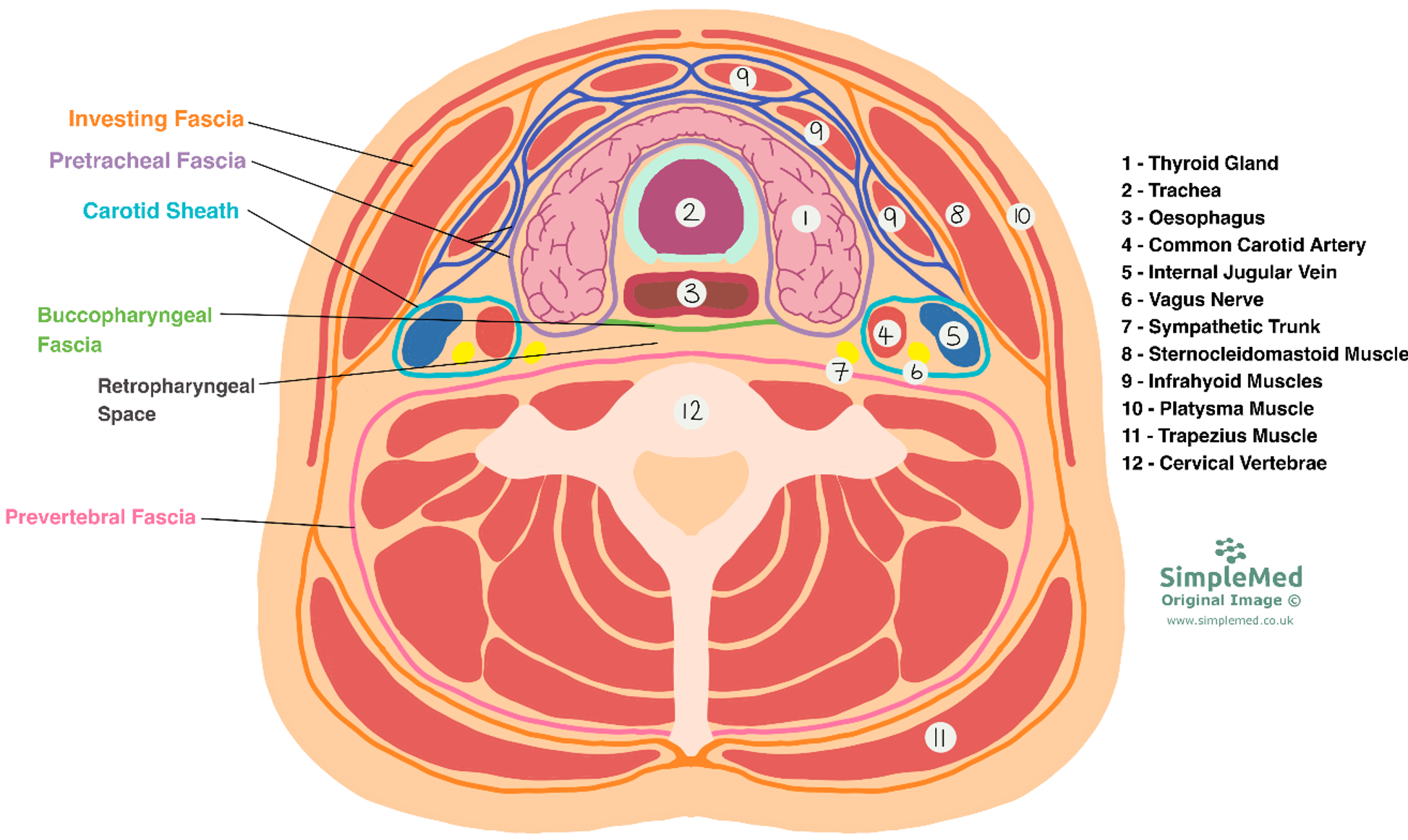 Diagram - A cross-section through the neck, showing the different fascia of the neck outlined in different colours

Muscles of The Neck

The three key superficial muscles of the neck are the platysma, trapezius, and sternocleidomastoid muscles.

Table - Superficial muscles of the neck, their innervation and action

The scalene muscles are situated on the lateral side of the neck, and this group is made up of the anterior, middle and posterior scalene muscles. They contribute to the flexion of the neck and can be used as accessory muscles to aid in breathing. 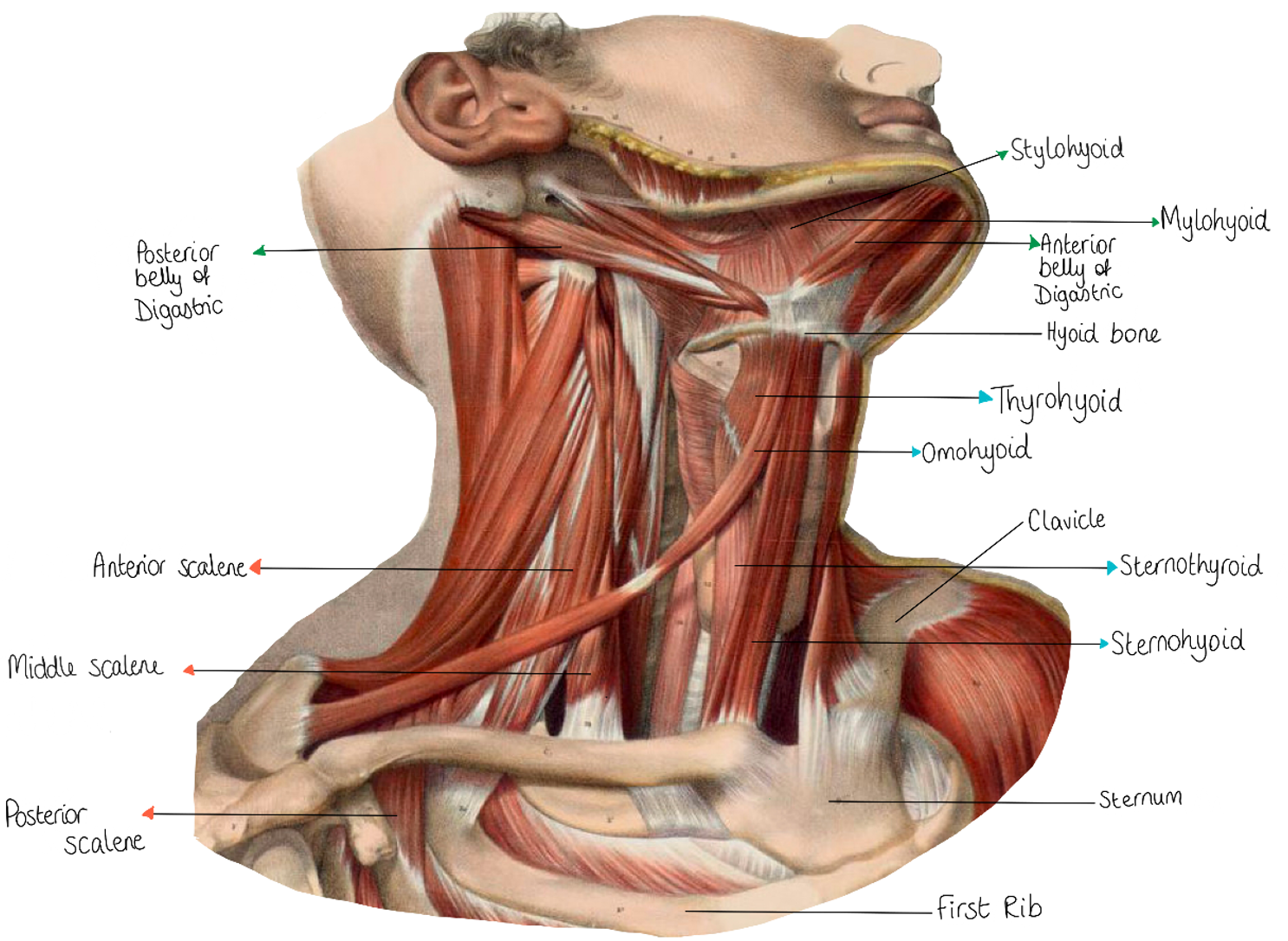 These muscles can be classified based on their physical action – either they can constrict in a circular fashion or pull in a linear fashion.

The facial nerve supplies the muscles of facial expression.

It has five main extra-cranial (arising outside of the skull) branches, namely: temporal, zygomatic, buccal, mandibular and cervical (remembered by the mnemonic ‘to Zanzibar by motor car’).

It is important to remember that there are two facial nerves, left and right, which each supply respective halves of the face.

The platysma muscle is a very thin, sheet-like muscle that covers the anterior portion of the neck.

It depresses the lower jaw and tenses the skin of the neck.

It is supplied by the cervical branch of the facial nerve.

The orbicularis oculi muscle is the round muscle that surrounds the eye.

It is responsible for closing the eyelids.

It has two main divisions:

The occipitofrontalis is a muscle in the forehead responsible for raising the eyebrows.

It is supplied by the temporal portion of the facial nerve.

It is responsible for closing the mouth and causing the lips to pucker, earning it the nickname ‘the kissing muscle’.

It is supplied by the buccal branch of the facial nerve.

The buccinator muscle sits between the mandible and the maxilla, forming the anterior portion of the cheek and the lateral portion of the oral cavity.

It is responsible for being able to pull back the corner of the mouth into a smile and flattens the cheek area to prevent food accumulation when chewing.

It is supplied by the buccal portion of the facial nerve.

The levator palpebrae superioris muscle is a muscle contained within the orbit that elevates the upper eyelid.

It is supplied by the oculomotor nerve.

If this muscle or the oculomotor nerve are not functioning correctly, the eyelid will droop, causing ptosis.

The epicranial aponeurosis is a dense layer of fibrous tissue that covers the top of the skull. 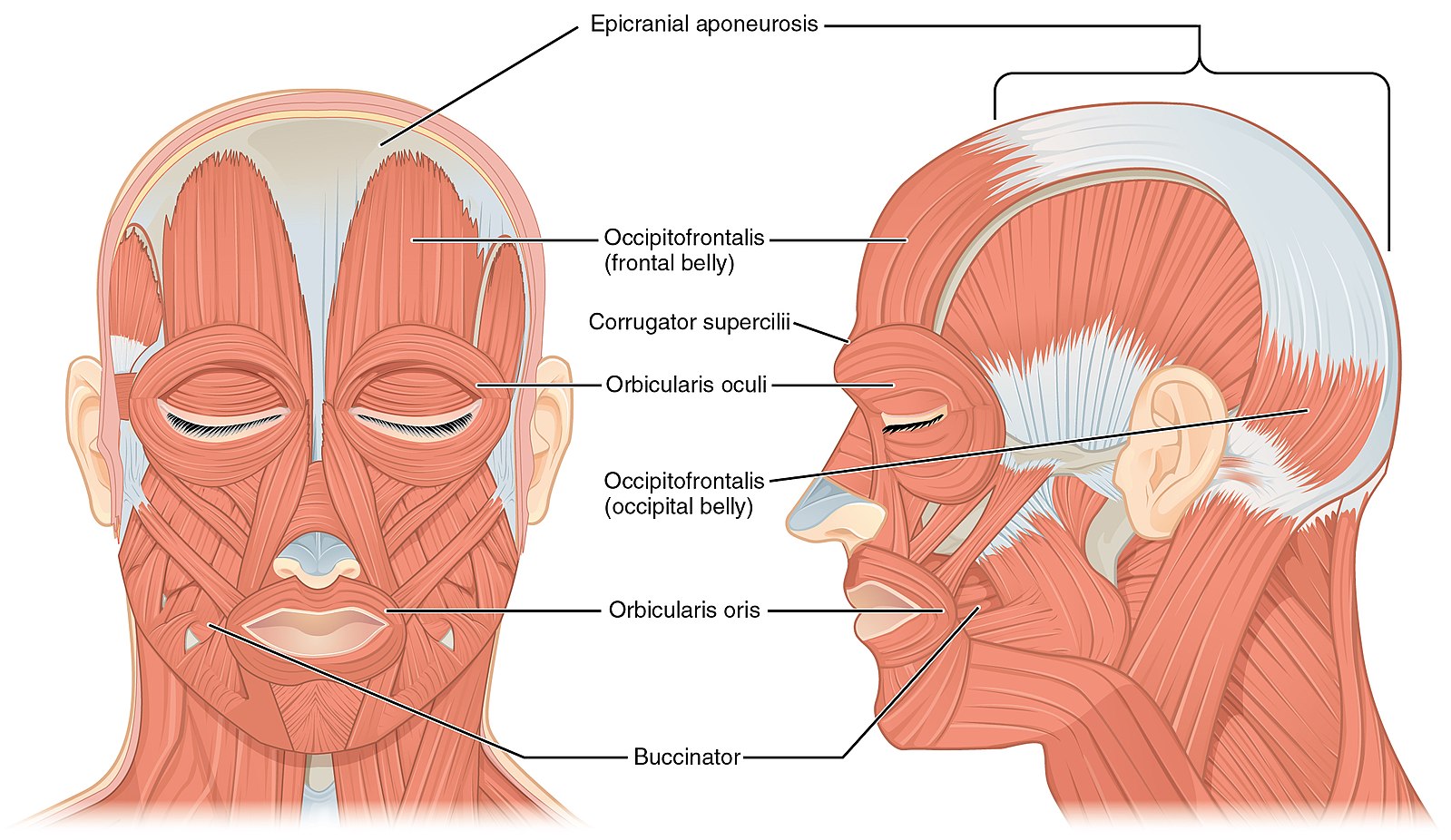 Compared to the numerous muscles of facial expression, there are only four muscles responsible for mastication, the elevation and depression of the mandible to allow the chewing of food.

The trigeminal nerve supplies the muscles of mastication (the muscles responsible for chewing), as well as providing sensory innervation to the face through three branches, namely the ophthalmic, maxillary and mandibular branches. For more information on the trigeminal nerve, please see the article on the first six cranial nerves found here.

The four muscles of mastication are all innervated by a motor branch of the trigeminal nerve and they all act on the temporomandibular joint (TMJ). These muscles are:

The temporalis, masseter and medial pterygoids are all responsible for the elevation of the mandible, and together provide enough force to chew tough food.

The lateral pterygoid is the only muscle responsible for the depression of the mandible. It works in conjunction with gravity and the suprahyoid muscles to open the jaw.

The pterygoid muscles cannot be palpated. If an individual were to place their fingers over their temples (for temporalis) or over the corner of their jaw (for masseter) as they clench, they would feel the muscles contracting.

Anterior Triangle of the Neck

Structures that run between the head and the thorax are associated with the anterior triangle.

The borders of the anterior triangle are:

The anterior triangle of the neck also contains the carotid triangle as a subclassification.

Carotid Triangle of the Neck

The carotid triangle is a region of the anterior triangle (mentioned above). It has the following boundaries:

The main contents of the carotid triangle are:

Structures in the carotid triangle are quite superficial, making this triangle a frequent access point for surgical intervention. 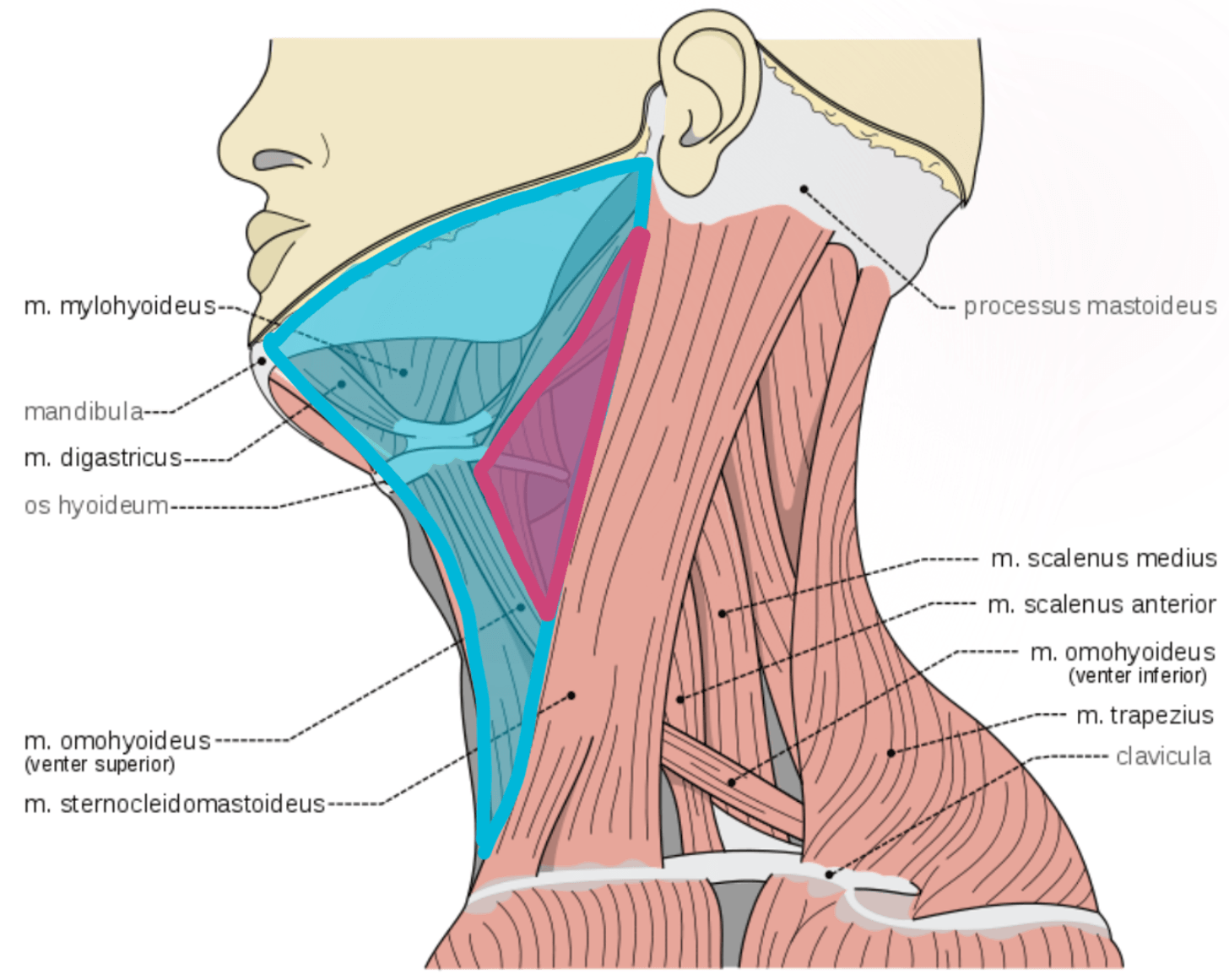 Posterior Triangle of the Neck

Structures that run between the thorax/neck and upper limb are associated with the posterior triangles.

The borders of the posterior triangle are:

Structures of the posterior triangle are important surgically: 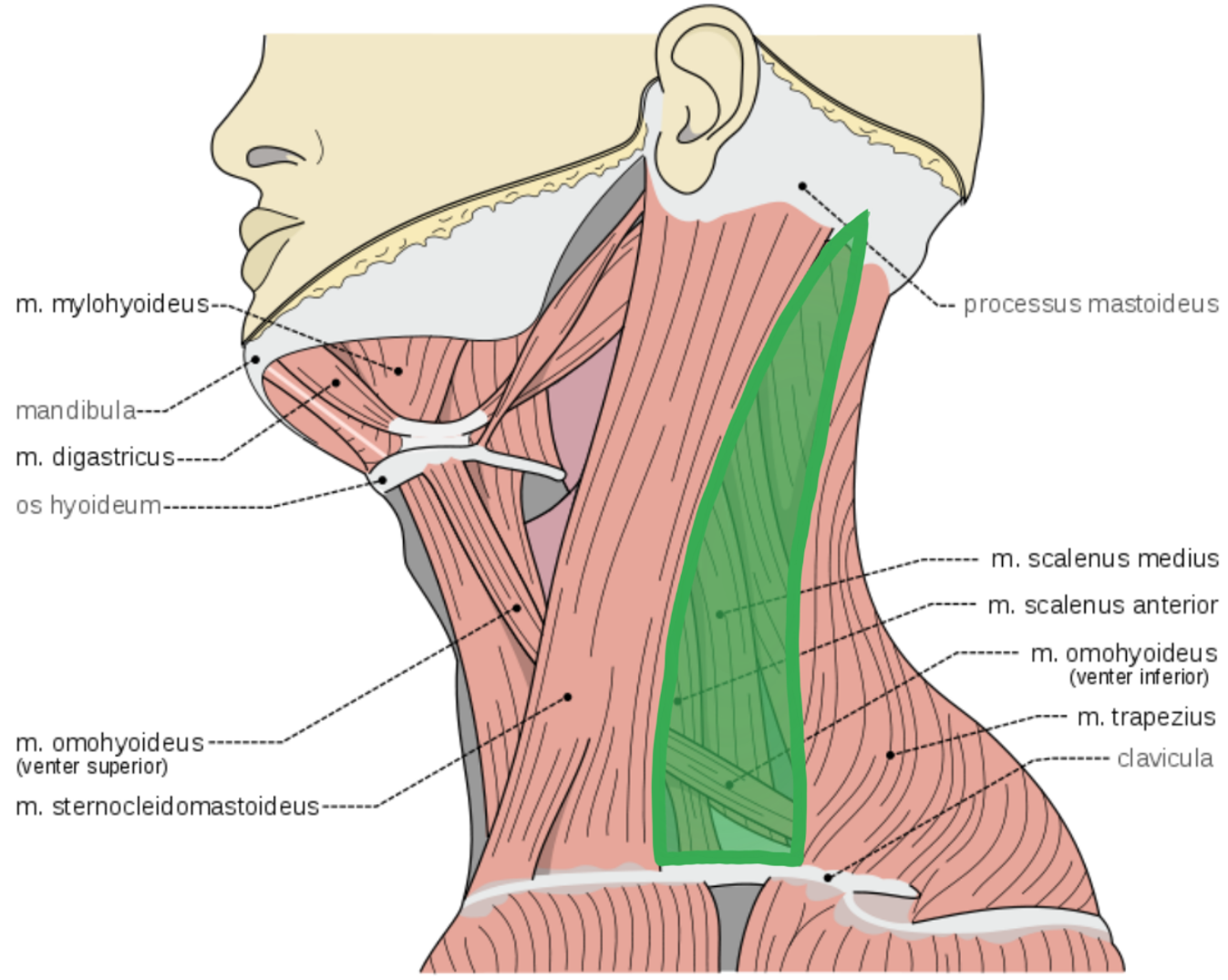 Diagram - The posterior triangle of the neck in green