A thrombus is the name given to a solid mass which is formed from the constituents of the blood within the heart or vessels during life. Thrombosis is the process of forming this thrombus and it occurs when the normal haemostatic mechanisms are turned on inappropriately.

There are three main factors which will increase the likelihood of thrombosis occurring. Collectively these are known as Virchow’s Triad of thrombosis and consist of the following:

Thrombosis occurs via the same mechanisms as in haemostasis, i.e. platelets are activated and bound together by fibrin, which goes on to trap red blood cells to form a clot.

Thrombi are laminated structures (they are made up of layers), and the lines of lamination are known as lines of Zahn. This is a consequence of the way thrombi are formed.

As platelets are the smallest constituents of blood, they tend to be pushed by the force of blood flow to the walls of the blood vessel and so are more concentrated along the endothelium. The platelets are therefore more likely to catch in any crevices, such as behind the valves of veins or abnormalities in the vessel wall. These caught platelets can form an aggregate and stick to the wall of the vessel. As blood continues to flow, additional platelets can join the aggregate, forming a white layer of platelets. Red blood cells then get caught in the aggregate, creating a red layer, followed by another white layer of platelets and the process repeats. These continual additions will result in the laminar form of the thrombus. 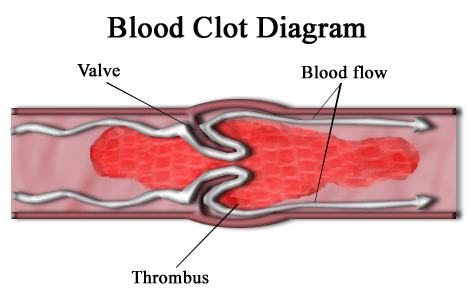 Diagram - The formation of a blood clot in a vein around a valve. Blood flow through the vein is reduced due to the obstruction.

Lines of Zahn are more visible in arterial thrombi as blood flows directly over the surface of the forming thrombi in arteries, whereas there is a degree of shielding by the valves in veins. Clots formed post-mortem have no lines of Zahn as there is no blood flow.

There are several outcomes which can arise from thrombus formation:

Embolism is the blockage of a blood vessel by solid, liquid or gas at a site distant from its origin. 90% of emboli are thromboemboli (originating from a thrombus), and most thromboemboli arise in the deep veins of the legs - called deep vein thrombosis (DVT).

Emboli carried in the veins will most often travel to the right side of the heart and enter the pulmonary circulation to block an artery in the lungs. This is called a pulmonary embolism.

In arteries, the blood flows from larger vessels to smaller vessels, so emboli carried in the arteries will lodge in smaller arteries downstream. Emboli from systemic arteries or the left side of the heart can impact themselves in the systemic circulation. If this occurs in the brain it can cause a stroke.

There are other types of embolism apart from thromboemboli that are rarer. These include:

For more information on artery and vein diseases, click here for the article in the cardiovascular system module. A summary of the clinical effects of arterial and venous thrombosis and embolism is below.

Sudden Occlusion of an Artery

Examples of how this can happen include: an abdominal aortic aneurysm (AAA), atherosclerosis, or clot formation in the left atrium in atrial fibrillation. In each of these examples one or more elements of Virchow's triad is affected.

Sudden occlusion of an artery is very serious and needs to be treated quickly to avoid damage to the limb or organ.

The signs and symptoms of occlusion of an artery the a limb are the six P’s, and result from the lack of blood perfusing the tissues:

The most common site for thrombus formation is in the deep veins of the legs. This is commonly due to immobility. As the calf muscles contract during movement, the venous blood is pushed back towards the heart. Therefore by not moving, for example in a long haul flight, the blood in the veins doesn’t flow as much, causing stasis of blood in the legs. This is one of Virchow’s triad, and a clot may develop. This is called a deep vein thrombosis (DVT). The five signs of inflammation may be seen in the calf.

If the DVT embolises, the fragment will travel through the venous system towards the right side of the heart and enter the pulmonary circulation. It will then lodge in an artery, causing a pulmonary embolism.