Guidelines on management pathways and classifications of severity of asthma used in this article can be found here: https://www.brit-thoracic.org.uk/quality-improvement/guidelines/asthma/

Asthma is a chronic disorder of the airways, characterised by intermittent airway obstruction and airway hyper-reactivity. It is usually reversible, either spontaneously, or with treatment.

A typical asthmatic will have an ‘asthma attack’ after exposure to a trigger that causes the patient to have a hypersensitivity reaction. The chronic inflammatory process seen in asthma is primarily driven by TH2 cells. In this process, macrophages process and present the trigger to T lymphocytes, which active the TH2 cells. These cells then release cytokines which attract and activate inflammatory cells, including mast cells, eosinophils and B cells (which produce IgE antibodies).

The reaction usually results in a two-phase response, consisting of an immediate response, which reaches its peak in around 20 minutes, and a late phase response, between 3-12 hours later.

In the immediate response, the IgE antibodies then cause mast cell degranulation, and the release of mediators such as histamine, tryptase, prostaglandin D2 and leukotrienes. It is these mediators that then cause the bronchial smooth muscle contraction of the airways, which leads to the bronchoconstriction seen in an asthma attack. This is an example of type I hypersensitivity.

In the late phase response, the mast cells and eosinophils release mediators and cytokines, which cause airway inflammation. A specific example of this is leukotriene C4 released by the eosinophils, which is toxic to the epithelial cells of the airways, causing them to shed. This is an example of type IV hypersensitivity.

The airway inflammation causes mucosal swelling due to the endothelial leakage caused by the immune response, which reduces the calibre of the airway. The infiltration of inflammatory cells causes thickening of the bronchial walls. There is an increased production of mucus, which is thick and slow moving, and contains the epithelium shed by the airways.

If the asthma is poorly controlled, there can be permanent remodelling of the airways, which may not be fully reversible. These changes include hypertrophy and hyperplasia of smooth muscle, hypertrophy of mucus glands, and thickening of the basement membrane. 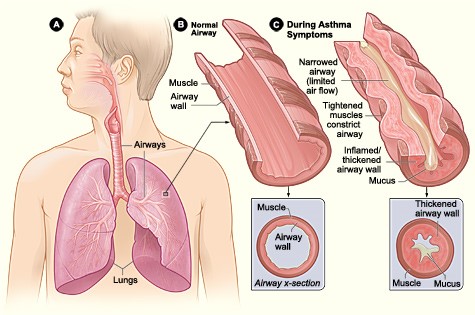 There are a wide range of things that can trigger asthma, including allergens, house dust mite faeces, cold air, exercise, fumes, cigarette smoke, perfumes and certain drugs, for example NSAIDs and β-blockers. Examples of allergens include pollen and animal hair/dander.

The inflammatory changes seen in asthma cause the airways to become hyper-responsive, meaning an asthma attack can be triggered in response to non-allergic stimuli.

Asthma is most commonly diagnosed in those under 18, but there is also another peak of diagnosis in the early 40s.

Common symptoms of an asthma attack are:

Asthma as a first presentation can present with a history of asthma attacks, or mild presentations of the symptoms above in a chronic nature.

The patient may also have a history of atopy (inflammatory processes seen elsewhere in the body) such as hayfever or eczema.

On examination, the patient may have an increased respiratory rate, increased heart rate, and decreased O2 saturations. If the patient is having an acute asthma attack, there may also be an expiratory wheeze on auscultation.

Asthma is usually diagnosed via spirometry and peak flow. Peak expiratory flow (PEF) can be measured using a peak flow meter in a GP setting, but can also be measured daily by a patient at home.

To use a peak flow meter correctly, there should be a ‘best of three’ approach, where the patient takes three peak flow readings, and records the highest. The peak flow reading for the patient can then be compared to what is expected of someone who is their age and gender: if this is reduced then it can be suggestive of asthma, although the diagnosis is usually confirmed with other investigations, such as spirometry.

If a known asthmatic patient records their peak flow readings regularly (for example three times per day), this can be a useful indicator of how well controlled their condition is. When spirometry is performed on an asthmatic patient it will show an obstructive pattern, where the FEV1/FVC ratio is <70%, but this pattern is reversible with a short-acting β-agonist. It is important to note that this can be compared to COPD in which there is no reversibility on administration of a β-agonist.

Management of chronic asthma is achieved through secondary prevention, by removing triggers from the home if possible, and through medication.

The use of medication for asthma follows the stepwise management pathway, in which the patient’s medication is reviewed regularly, and then may be stepped up or down depending on symptoms. This is performed with the aim that the patient is on the least amount of treatment needed to effectively manage their symptoms and prevent an acute exacerbation.

The stepwise plan is outlined below. Before escalation, it is important to check compliance with the current regimen, as improving inhaler technique or compliance may be more effective than changing the medication.

Signs that a patient needs to be moved to the next step in the escalation pathway include using their SABA >3 times a week, being woken from sleep by symptoms more than once a week, having symptoms >3 times a week, or have had an exacerbation of asthma requiring oral steroids within the past two years.

Every asthmatic should have a self-management plan that has been devised between them and a healthcare professional, which has written instructions on when and how to step-up and step-down their own treatment. This leads to better outcomes in terms of day-to-day control, frequency and severity of exacerbations.

Diagram - Stepwise management of asthma, as per the most recent guidelines

An exacerbation of asthma (an ‘asthma attack’) can be graded on its severity, ranging from mild to near-fatal. It is important to distinguish between these different types in order to arrange for the most appropriate treatment for the patient. The following information can be used to help distinguish the severity of asthma in people over 12, in accordance with the most recent NICE guidelines.

Classifications of Asthma Exacerbations According to the British Thoracic Society

Acute Severe Asthma – diagnosed if the patient experiences any one of the following symptoms:

Life-threatening Asthma – diagnosed if the patient experiences any one of the following symptoms:

Airway narrowing according to the pathophysiology above can lead to reduced ventilation of the alveoli causing V/Q mismatch. Hyperventilation occurs, but this cannot compensate for the hypoxia, but can compensate for CO2 retention by increased breathing out of CO2.

This means that in mild to moderate asthma there is ↓pCO2 and ↓pO2 due to hyperventilation, and therefore type 1 respiratory failure.

Comparatively, in near-fatal attacks there is more extensive involvement of airways and exhaustion, which limits the respiratory rate and therefore affects the amount of O2 that can be breathed out, meaning there is ↑pCO2 and ↓pO2 and therefore type 2 respiratory failure.

Treatment of an acute severe asthma attack includes high-flow oxygen, nebulised salbutamol, and oral prednisolone, with the possibility of further treatment if required. All patients admitted to hospital with an exacerbation of their asthma should have a follow-up with their GP.