Next Lesson - Basics of Bone Anatomy

There are 206 bones in the adult body. The functions of bones include locomotion, protection and haematopoiesis to name a few.

Osteoporosis is a condition of reduced bone density originating from an overactivity of osteoclasts. Fractures are the most common symptom of osteoporosis and can lead to disability. Risk factors include age, oestrogen deficiency, chronic conditions, medications, smoking and too little exercise. Prevention of osteoporosis includes maintaining a healthy diet and exercise, stopping smoking, and reducing alcohol intake. It can be managed through the use of bisphosphonates.

Fractures of bone occur when the periosteum is disrupted. Fractures require significant force in the young, but less force in the elderly due to the higher incidence of osteoporosis in this age group. It is important to consider whether a fracture is open (which carries an infection risk) or closed, and whether it is partial or complete.

Stages of fracture repair include: haematoma formation, angiogenesis, formation of a pro-callus of granulation tissue, soft callus formation by osteoblasts, hard callus formation through endochondral ossification, and then remodelling by osteoclasts.

This article describes the structure of bones from a molecular perspective. More information can be found on the anatomical relationships of bones in the rest of our Musculoskeletal Section.

The skeleton in an adult human is made up of 206 bones and facilitates the movement of the body and the protection of important internal organs.

See our article ‘Basics of Bone Anatomy’ which includes information about the types of bones and their functions.

There are three main types of cell that make up bone tissue.

Osteoblasts are derived from mesenchymal stem cells and are responsible for the laying down of bone. This is done through the production of dense collagen and hydroxyapatite (the mineral component of bone). Osteoblasts are closely associated with one another, forming an osteon. Once the osteoblast has surrounded itself with bone matrix, it becomes trapped in its lacuna and becomes an osteocyte.

Osteocytes are star-shaped cells that cannot divide. Osteocytes are formed from osteoclasts that have been trapped in the bony matrix that they have secreted and exist in a space called a lacuna. This restrictive space means that the osteocytes are no longer able to produce osteoid (bone tissue). The processes of an osteocyte instead stretch out, connecting to other osteocytes through canaliculi.

Osteoclasts are the type of bone cell responsible for the break down of bone tissue through the release of acid (to dissolve the hydroxyapatite crystals) and collagenase. They have an important role in remodelling of bone and regulation of calcium levels in the blood, but also play a key part in the pathophysiology of osteoporosis.  The osteoclasts originate from haemopoietic stem cells, rather than mesenchymal stem cells which produce osteoblasts.

The main building block of bone is an osteon, shown in the image below. It is a collection of osteocytes trapped in the bone matrix that they have secreted. The individual osteocytes communicate with each other through microscopic canals called canaliculi. An osteon has a central canal called a Haversian Canal, which contains blood vessels and nerves to supply the bone. 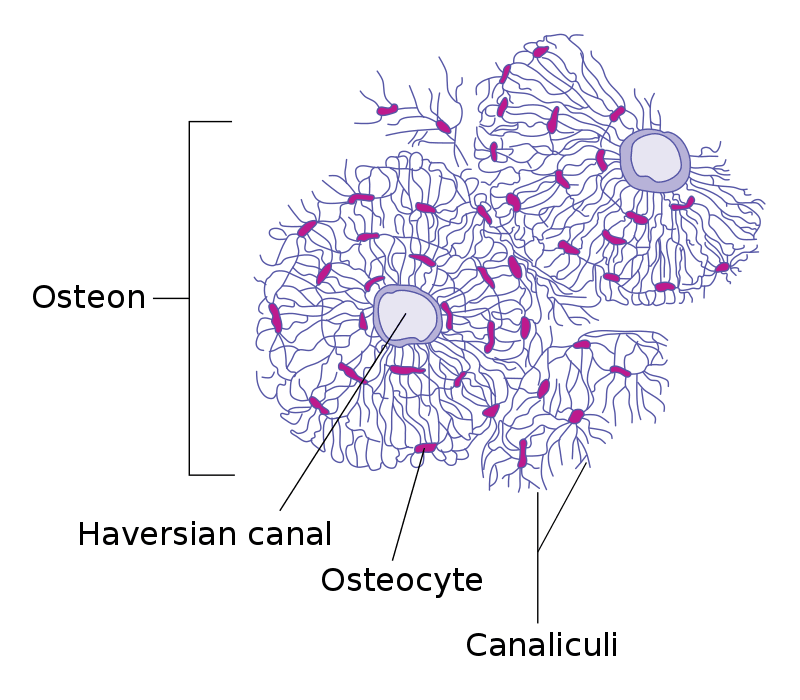 Image: this diagram shows the structure of an osteon; note the Haversian canal and the lamellae created by osteocytes.

Compact bone consists of closely packed osteons. An osteon is made up of a central canal called the Haversian canal, surrounded by concentric rings of matrix called lamellae. These Haversian canals lie parallel to the axis of the long bone.

Between the lamellae are osteocytes, matrix producing cells which have been surrounded by bony tissue and now exist in lacunae. The lacunae are connected by canaliculi. 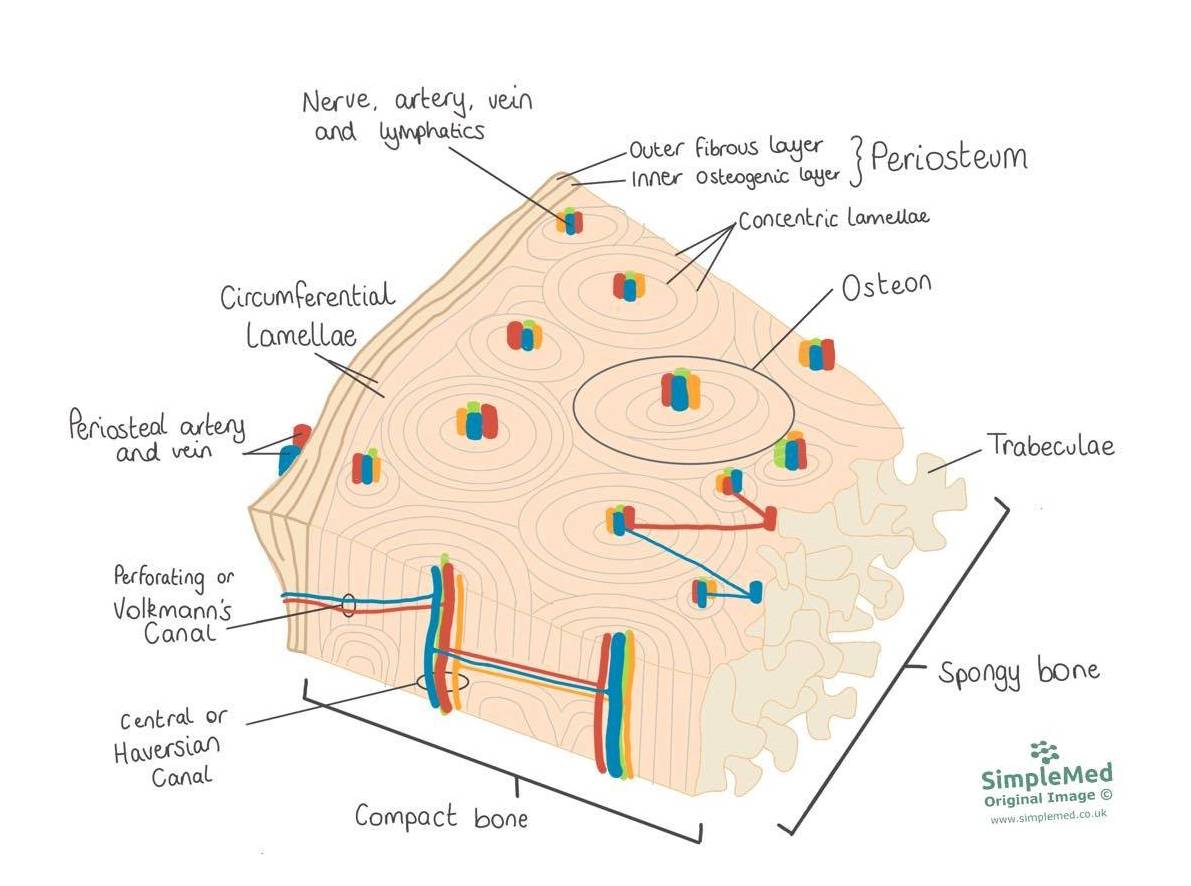 Image: this diagram shows the structure of a long bone. Key features include the periosteum, the lamellae of the osteons and the trabeculae of the spongy bone centre.

Spongy or cancellous bone is lighter and less dense than compact bone. It consists of plates called trabeculae, bars of compact bone, and irregular cavities that contain red bone marrow (responsible for haematopoiesis). While it may seem that that the trabeculae are arranged randomly, in fact they are organised to provide maximum support. They are aligned along the stress points of the bone and can realign if the direction of the stress on the bone changes. 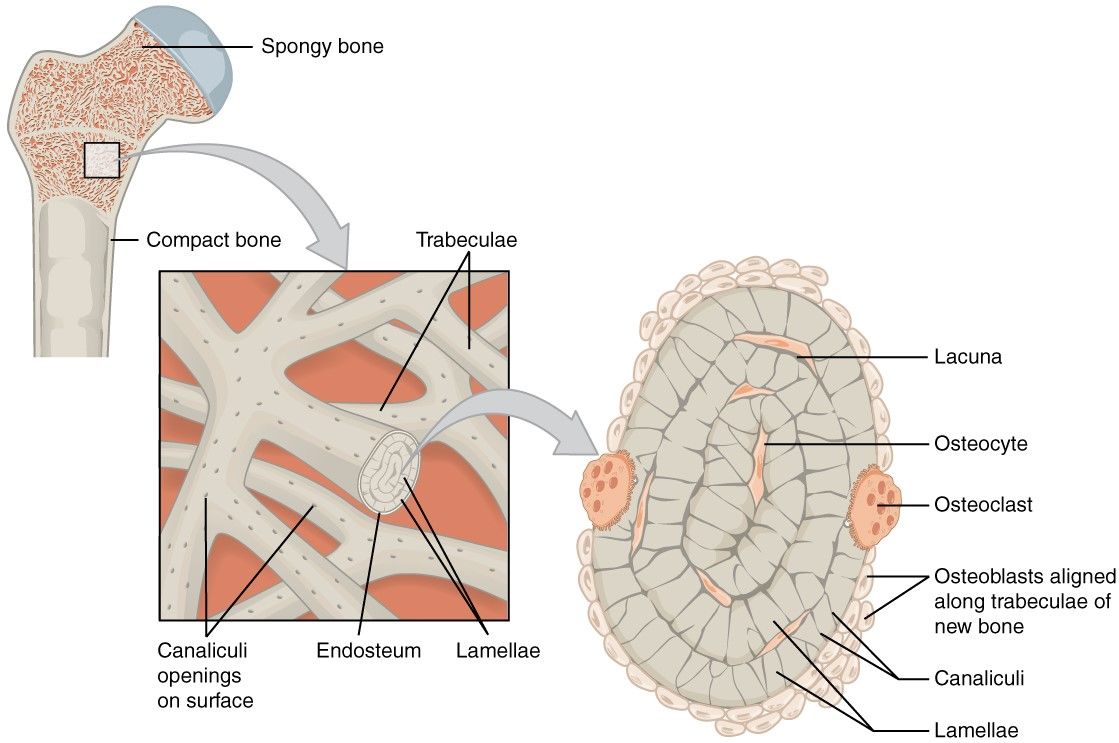 Image: this diagram shows the structure of spongy bone, and makes it clear how osteons exist in this type of bone.

In the body there are two mechanisms through which bones are created.

The stages are shown in the following diagram: 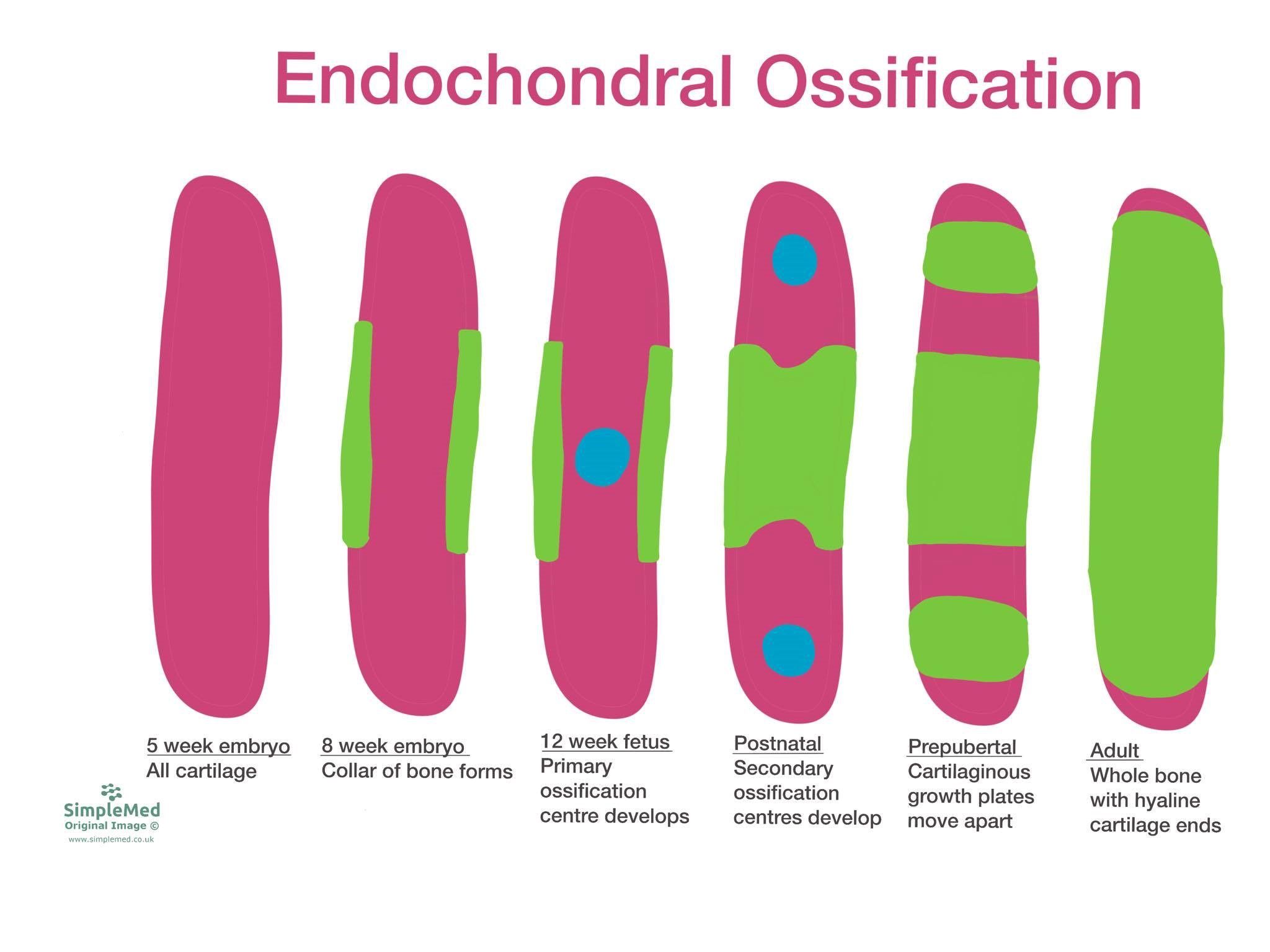 Endochondral ossification begins at around 5 weeks gestation, when the long bones have a complete cartilaginous template formed. Around 3 weeks later, a collar of bone begins to form around the middle of the bone.

At birth, the secondary ossification centres have developed at the ends of the bone and over childhood these develop into bone themselves, leaving cartilage in two sections: at the end of the bones to lubricate the movement of the bones, and in stripes slightly medially in the bone to allow the growth of the bone. These stripes are called epiphyseal growth plates.

As an adult, when full length of the bone has been achieved, the epiphyseal growth plates fuse and leave only the ends capped with cartilage.

The stages of intramembranous ossification are as follows:

Conditions of the Bone

Osteoporosis is a disease that involves a mismatch between osteoblast and osteoclast action, with bone breakdown being much faster than bone creation. This causes a decrease in bone mineral density, leading to an increased risk of fractures.

Fractures are the main symptom of osteoporosis, with common sites of fracture being vertebral bodies, femoral neck, radius and ulnar. These fractures can occur with a comparatively small amount of force due to the decreased density of bone. Complications of such fractures can include chronic pain and decreased mobility.

Risk factors for osteoporosis include:

A healthy balanced diet throughout life and reducing use of medications that increase the rate of bone loss is key to preventing osteoporosis.

Prevention of fractures in a patient who has established osteoporosis can be done through improving diet, increasing exercise, stopping smoking, reducing alcohol and preventing falls.

Bisphosphonate containing medications are useful in patient with osteoporosis to decrease the occurrence of future fractures. 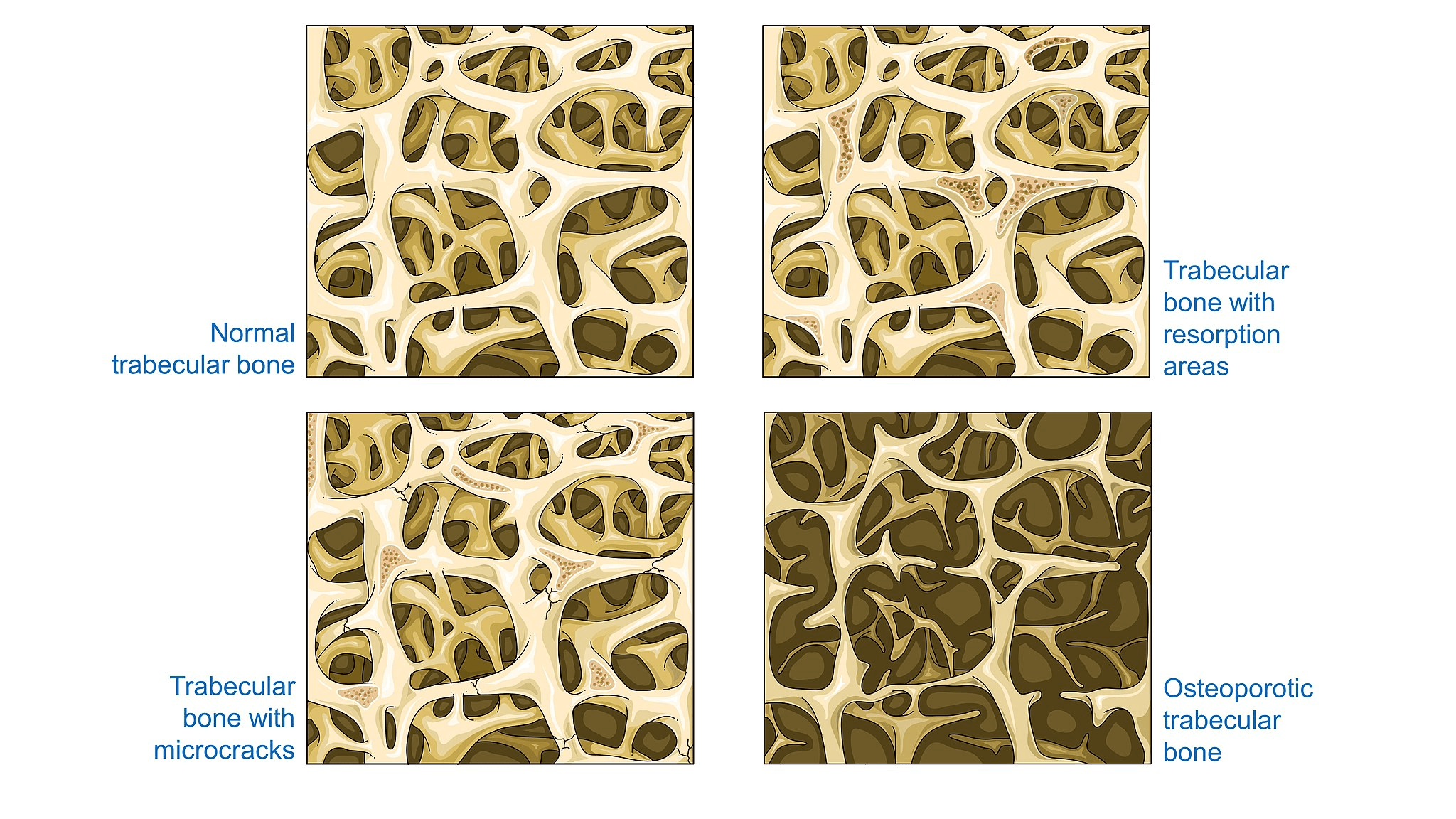 Image: this diagram shows the stages of bone condition leading to osteoporosis.

Fractures of bone occur when the periosteum is disrupted. Fractures require significant force in the young, but less force in the elderly due to the higher incidence of osteoporosis in this age group.

One important consideration when assessing the severity of a fracture is whether the fracture is open or closed. An open fracture is one that has broken the skin usually due to a fragment of bone protruding through the skin. This is clinically important as a break in the skin provides a route into the bone for infection.

Another consideration is whether a fracture is complete (all the way through the bone) or partial (only including one side of the periosteum).

There are six classifications of types of fractures: 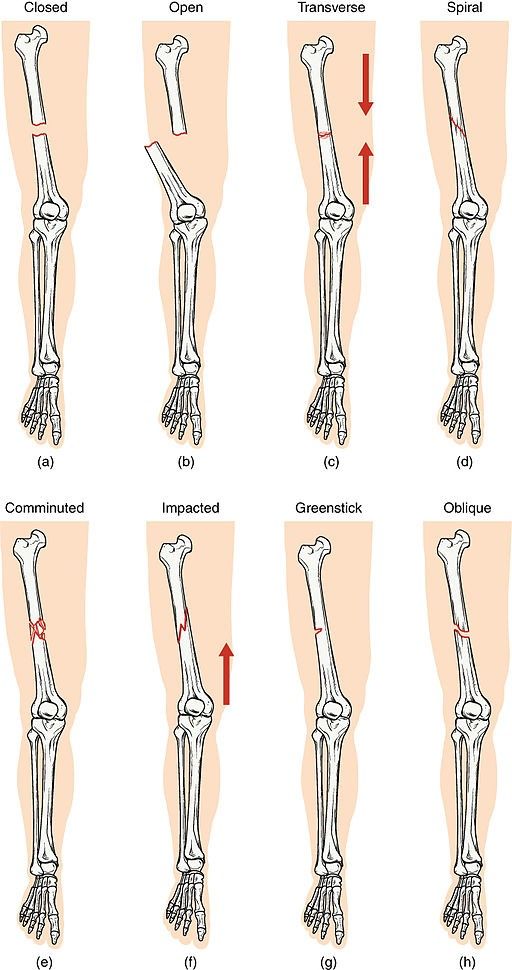 Image: this diagram shows the different types of fractures.

There are two types of fracture healing depending on the conditions of the break and the repair.

Primary intention healing occurs when two bits of bone are pinned back together surgically, so the fracture site is put under significant tension. This means that the osteoclasts and osteoblasts don't realise there is a fracture at all, and continue the build-break cycle as normal. This heals a the bone without the need for callus formation. .

Secondary intention healing occurs when there is not significant tension on the bones, basically any fracture that is not operated on. This type of healing follows the stages below, which are important to know to understand the management of fractures. The stages of repair are as follows:

It is important that the bone is protected and immobilised until the hard callus forms, so that no further damage occurs. In any plaster or support it is also important to allow space for swelling to form and recede without restriction. This can be achieved by allowing space in a cast, or by replacing casts.

Remembering the stages of fracture repair can be very difficult. A mnemonic can be helpful, and one that I use is:

Image: this diagram shows a simplified version of the stages of fracture repair. In this image, the label of external callus represents the soft callus as at this point it only contains soft tissue.