The action potential describes the phenomenon by which excitable cells create an electrical signal via the movement of ions across the membrane. The key features of an action potential are:

The action potential relies on the movement of Na+ and K+ ions. Recall that Na+ influx causes depolarisation, whereas K+ efflux causes hyperpolarisation.

The stages of the action potential are as follows: 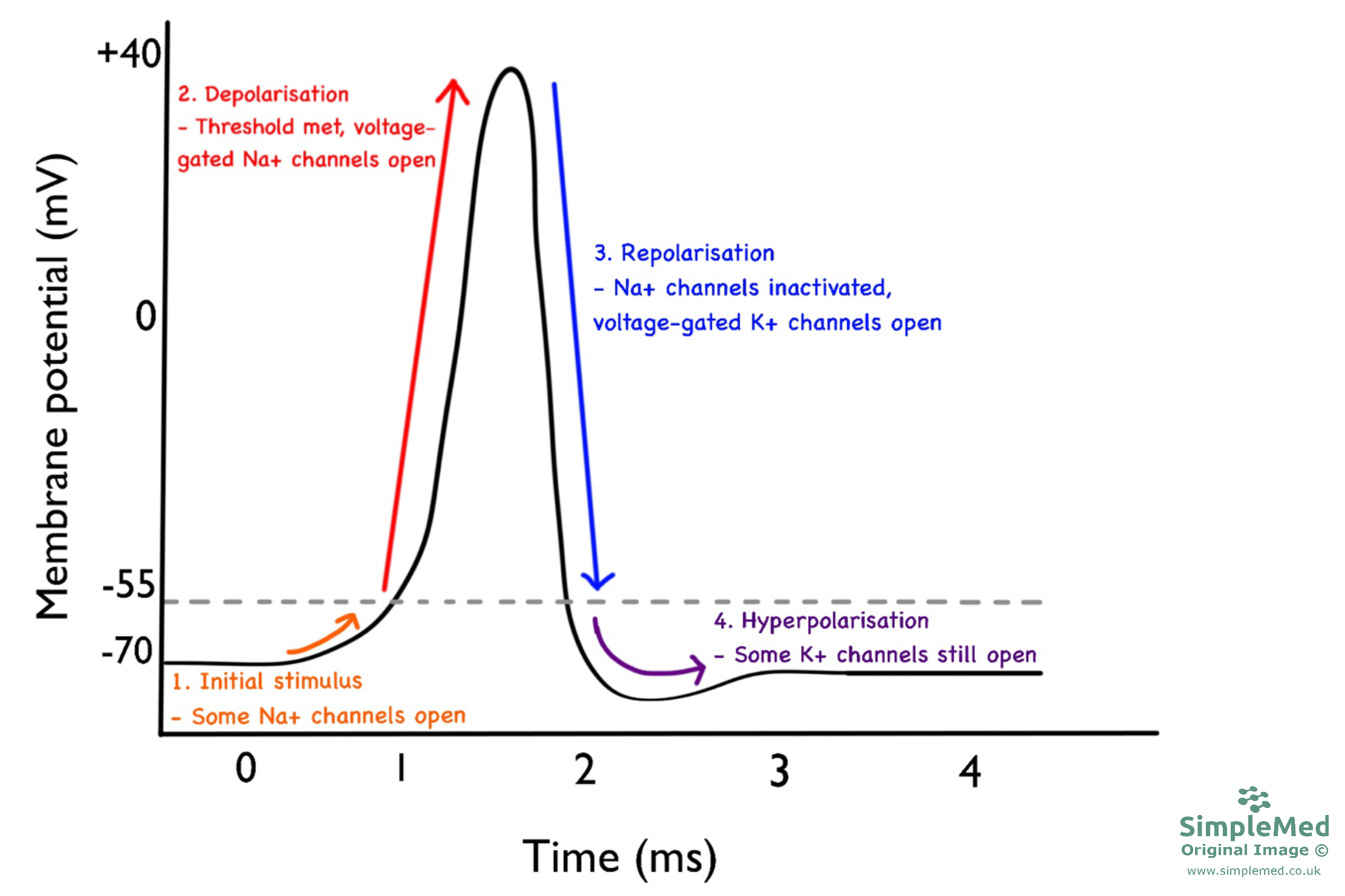 Diagram - Graph showing the stages of the neuronal action potential

The voltage-gated Na+ channel is different from other ion channels in that apart from being open or closed, it also has an ‘inactivated’ state. VGSCs become inactivated in response to depolarisation and in this state Na+ ions cannot pass through the channel. From the inactivated state, the channel must first ‘recover’ into the closed state before it can be open again. This provides the basis for the refractory period. 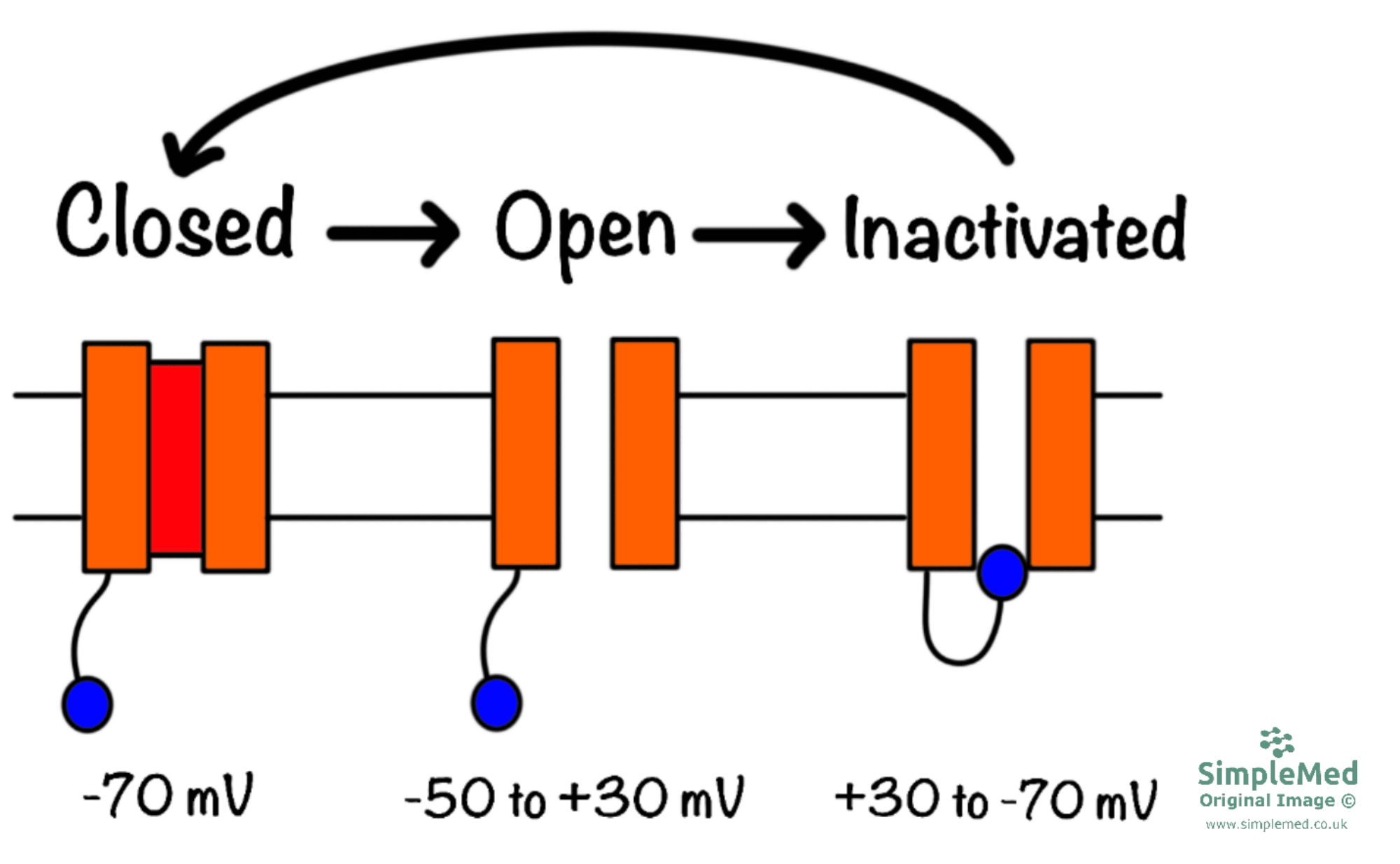 The refractory period describes the period of time in which the cell cannot generate an action potential. There are 2 terms that you should be familiar with:

Local anaesthetics, such as lidocaine, work by blocking Na+ channels in small afferent neurones responsible for pain. By blocking these channels, it prevents depolarisation so an action potential cannot be generated. It is often referred to as a ‘use-dependent’ block, meaning that the drug has a preference for blocking Na+ channels which are in the open or inactivated state.

Propagation of the Action Potential

Local current theory dictates that depolarisation at a given point in the membrane causes a spread of depolarisation in the surrounding area of membrane. This is because an influx of Na+ ions repels other positive ions in the cell, resulting in local depolarisation. However, the further this current spreads, the weaker it gets.

Nervous transmission is made quicker by myelination of nerve fibres. Axons are wrapped in a fatty substance called myelin, but small portions of axon are left unmyelinated and these are termed Nodes of Ranvier. It is very important to note that a myelinated axon does not have any ion channels in the membrane, channels are only present at the Nodes of Ranvier. 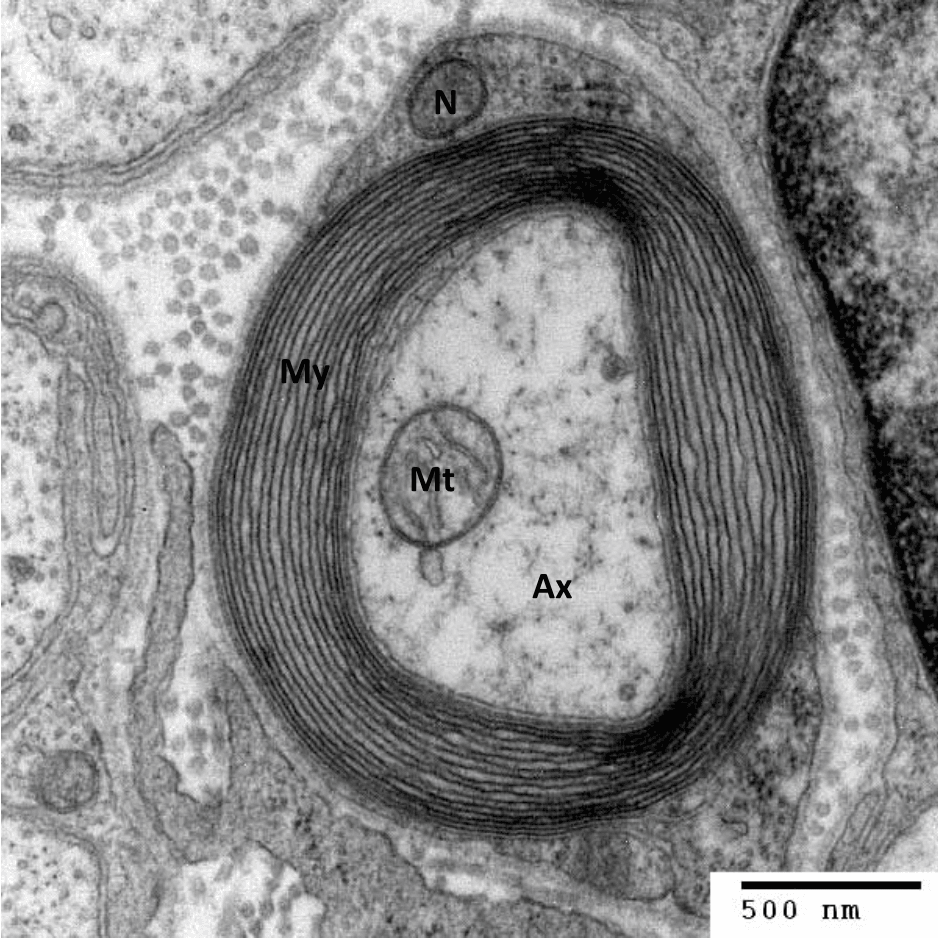 The myelin sheath acts as an electrical insulator, causing the local current to spread to the next node before the next action potential is generated. This is described as saltatory conduction, because the action potential appears to ‘jump’ from node to node. This is much faster than if action potentials had to be continuously generated along the entire length of axon.

Myelination improves conduction by increasing the length constant. This is achieved by:

Demyelination diseases, such as multiple sclerosis (MS) and Charcot-Marie-Tooth disease, result from breakdown of the myelin sheath. They are characterised by impaired nervous transmission. Areas of damaged myelin sheath (plaques) have low resistance and high capacitance, so the local current fails to spread to the next node so the next action potential cannot be generated.

The process of synaptic transmission at the neuromuscular junction is as follows:

Drugs which block action at the neuromuscular junction can be used as muscle relaxants in conjunction with general anaesthesia. They are particularly useful for relaxing the vocal cords to facilitate endotracheal intubation.

Myasthenia gravis is an autoimmune disease where autoantibodies target and destroy nAChRs at the neuromuscular junction, so it is harder for the end plate potential to reach the threshold for action potential generation. This disease is characterised by fatigable muscle weakness and is treated using acetylcholinesterase inhibitors such as pyridostigmine.