This article is split into different sections:

All arrhythmias originate somewhere outside of the normal conduction system of the heart. This can be in the atria or ventricles.

There are two common ways that an abnormal rhythm can start to cause an arrhythmia. This can be because of an ectopic focus, or a re-entry loop.

Many tachycardic rhythms are caused by ectopic beats. These are impulses that are generated by an area (focus) in the myocardium, not the sinoatrial (SA) node. Ectopic impulses can be generated by a small area of highly excitable myocardium which can spontaneously depolarise and cause a wave of depolarisation.

The features seen on an ECG depend on where the ectopic impulse originates:

In the conduction system of the myocardium, there are areas in the pathway where electrical impulses can split and travel down two paths. This usually isn't a problem because when the two impulses meet each other again, they cancel each other out. This allows the myocardium to contract in an even and efficient way.

The impulse in a re-entry loop will travel back on itself and take alternative routes thorough the myocardium, causing abnormal contraction of the heart. This is best shown in the diagram below.

If there are re-entry loops, patient can have: 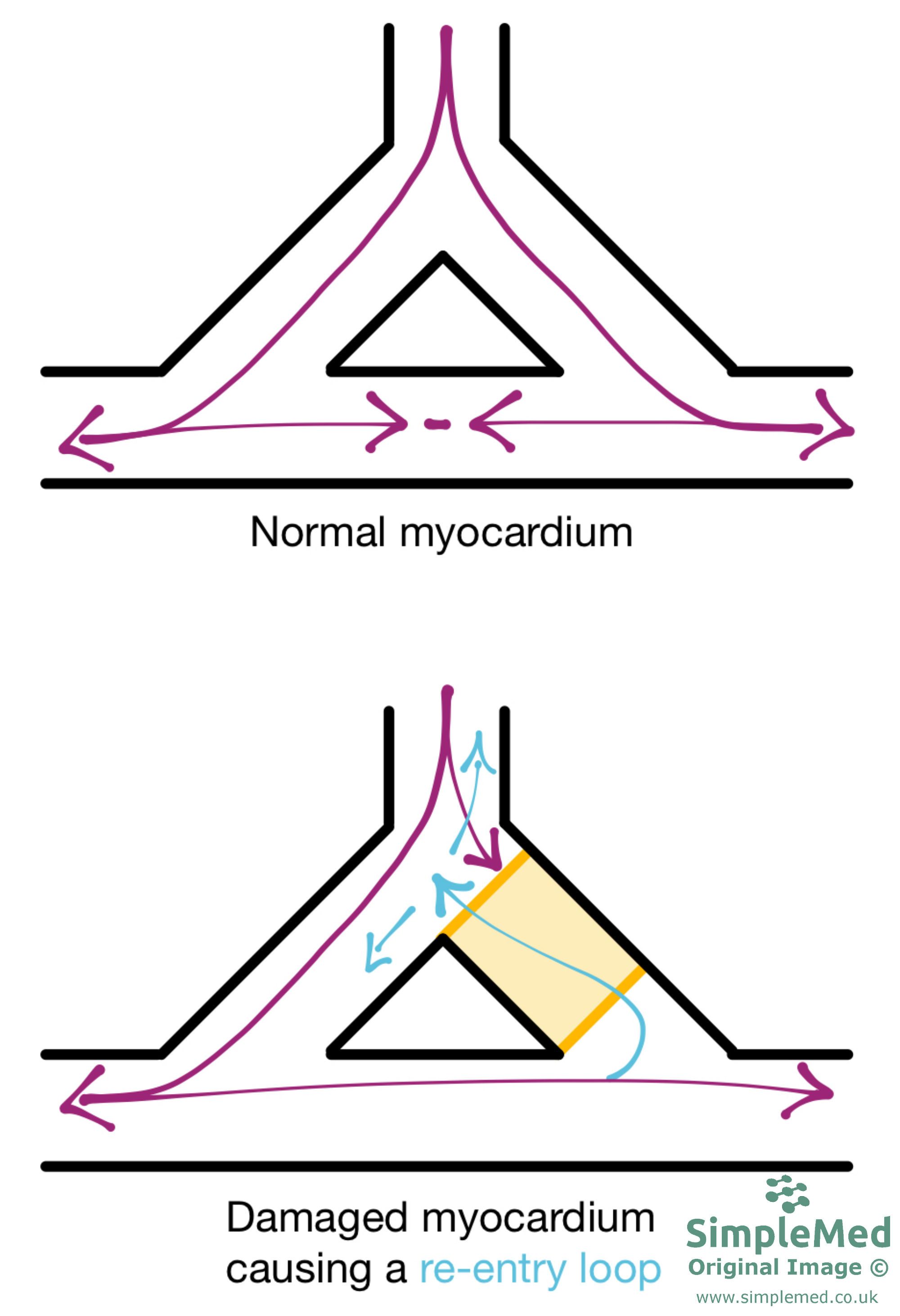 In atrial tachycardia the heart rate is above 100 bpm. As the heart is beating so fast, the T waves and P waves can be occurring at the same time and merge on the ECG. One cause can be a re-entry loop in the AV node, causing AV nodal re-entry tachycardia. A small circuit develops in the AV node and sends off waves of conduction to the ventricles.

Diagram - Atrial Tachycardia on an ECG. The P and T waves occur at the same time and have merged to form one wave

Atrial flutter is caused by a re-entry loop in the atria.

The AV node cannot keep up with the rapid atrial depolarisation because it cannot conduct impulses more than around 200bpm. Some P waves are therefore not conducted resulting in AV block. Most commonly it is a 2:1 AV block, i.e. 2 atrial beats (two P waves) for every 1 ventricular beat (one QRS complex). Atrial flutter gives a sawtooth baseline appearance to the ECG because of the consecutive P waves.

The re-entry loop sends off impulses at around 300bpm, making the most common heart rate 150bpm.

Diagram - Atrial Flutter on an ECG. Note how there are 2 flutter waves for every QRS complex

In AF, rapid, chaotic impulses are generated by multiple ectopic foci in the atrial myocardium. Normal atrial contraction is lost as the atria simply quiver.

This can be felt as an irregularly irregular pulse above 100 bpm. Pulse strength will vary due to beat-to-beat variations in cardiac output. This is because the length of time between each ventricular contraction is different, therefore the amount of time the ventricles have to fill with blood will be different. This leads to different volumes of blood being pumped in each heart beat.

In AF, the quivering atria essentially cause stasis of blood as the atria are less efficient at pumping blood into the ventricles. This can result in thrombus formation. A thrombus in the left atrium is more common as blood can sit in the left auricle and clot, which can easily embolise and cause an ischaemic stroke.

Ventricular tachycardia is caused by an ectopic focus in the ventricular myocardium. VT is identified as three or more consecutive ventricular ectopic beats - these are seen as very broad and bizarre QRS complexes on the ECG. VT is a dangerous rhythm as it can degenerate into ventricular fibrillation.

In ventricular fibrillation there is chaotic ventricular depolarisation caused by impulses from numerous ectopic foci in the ventricles. As a result, there is no co-ordinated contraction of the ventricles and atria. This results in severely reduced cardiac output, and the patient will go into cardiac arrest.

VF is commonly associated with myocardial infarction, but can also be as a result of Torsades de Pointes (discussed next).

Torsades de pointes is a polymorphic ventricular tachycardia. This means that there is VF, however, the QRS complexes all look very different.

Diagram - First Degree AV Block on an ECG. Note the lengthened but constant distance between the P wave and QRS complex

Third degree AV block is when there is no impulse transmission between the atria and ventricles and therefore they work independently. There is no relationship between the P wave and QRS.

The ventricular pacemaker takes over as an escape rhythm. Escape rhythms occur when the conduction system is blocked, and so the ventricle have to manage themselves and become their own pacemaker. The QRS complex becomes wider because the impulse isn't travelling via the His-Purkinje system. The rate of the ventricular pacemaker is slow and the blood pressure cannot be maintained so a proper pacemaker is urgently required for patients with third degree heart block.

STEMI and NSTEMI will both be talked about in more detail in the article on Acute Coronary Syndromes.

A STEMI is a full-thickness myocardial infarction. This means that an area of heart muscle is damaged all the way through. This is due to the full occlusion of a coronary artery by a thrombus or embolism.

The ECG and blood test signs of an ECG vary depending on how much time has passed since the event:

Diagram - The changes in an ECG following a STEMI 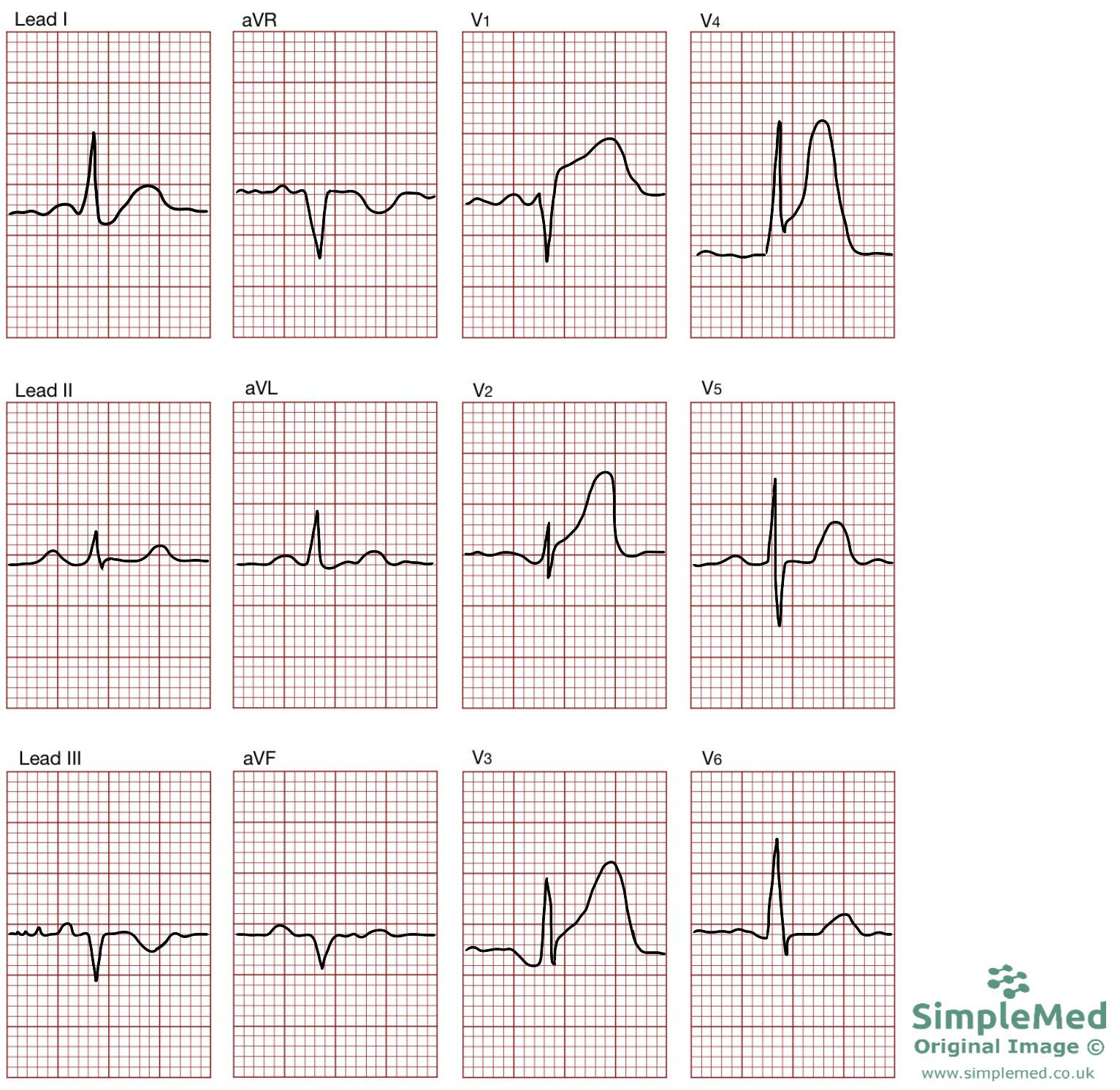 Diagram - A 12-lead ECG of an anteroseptal STEMI. This is shown by the ST elevation and the hyperacute T wave in leads V1-V4

An NSTEMI is a partial-thickness myocardial infarction. This is when an area of myocardium is damaged, but the damage is mainly to the inner part of the myocardium. This can occur when a coronary artery is almost completely occluded by an embolism or thrombus. The ECG changes are slightly different in NSTEMIs compared to STEMIs: 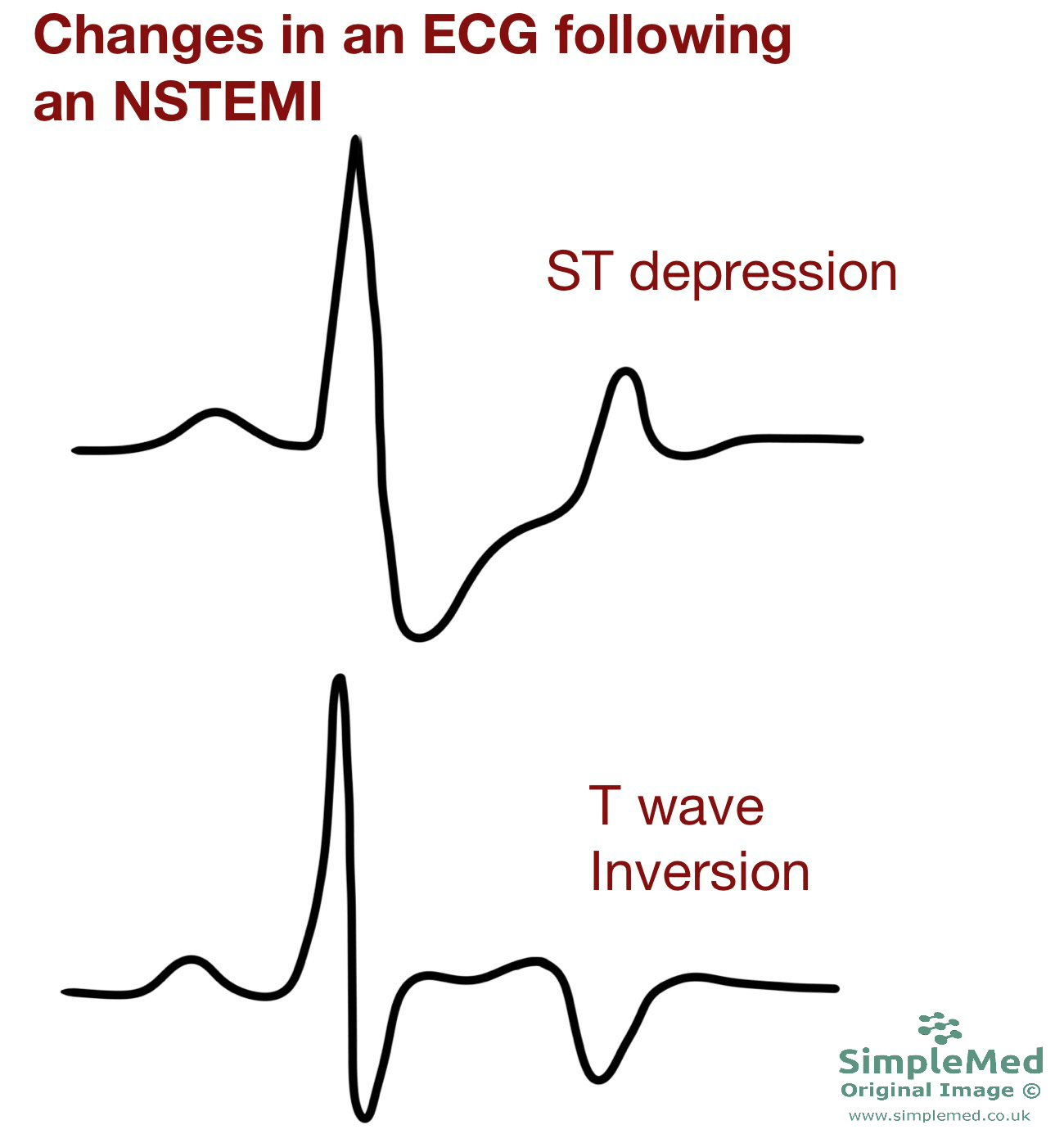 Diagram -The changes in an ECG following a NSTEMI

Hyperkalaemia makes the resting membrane potential less negative, depolarising it a little. This inactivates some voltage-gated sodium channels so there is a slower upstroke of the ventricular action potential, and a slower heart rate.

In hyperkalaemia, the ECG seen will depend on the potassium concentration in the plasma. All values below relate to an approximate plasma [K+].

Diagram -The changes seen in hyperkalaemia on an ECG

Hypokalaemia is a plasma potassium concentration below 3.5 mmol/L. It results in a lengthened ventricular action potential and delays repolarisation. Longer action potentials can lead to early after-depolarisations causing oscillations in the membrane potential. This can result in VF.

As the level of potassium in the plasma decreases, its appearance on an ECG changes:

Diagram - The changes seen in hypokalaemia on an ECG

DAD is when the membrane depolarises (without stimulation) soon after repolarisation following a contraction. This is more likely if there is a high intracellular calcium as this can trigger contractions when there shouldn’t be one. The depolarisation can reach threshold potential, initiating an action potential, causing the heart to contract.

EAD is when the membrane depolarises (without stimulation) during repolarisation following a contraction. This is more likely to occur if there is a long QT interval as the action potential is longer. Consecutive EADs lead to oscillations in the membrane potential which can result in VF. 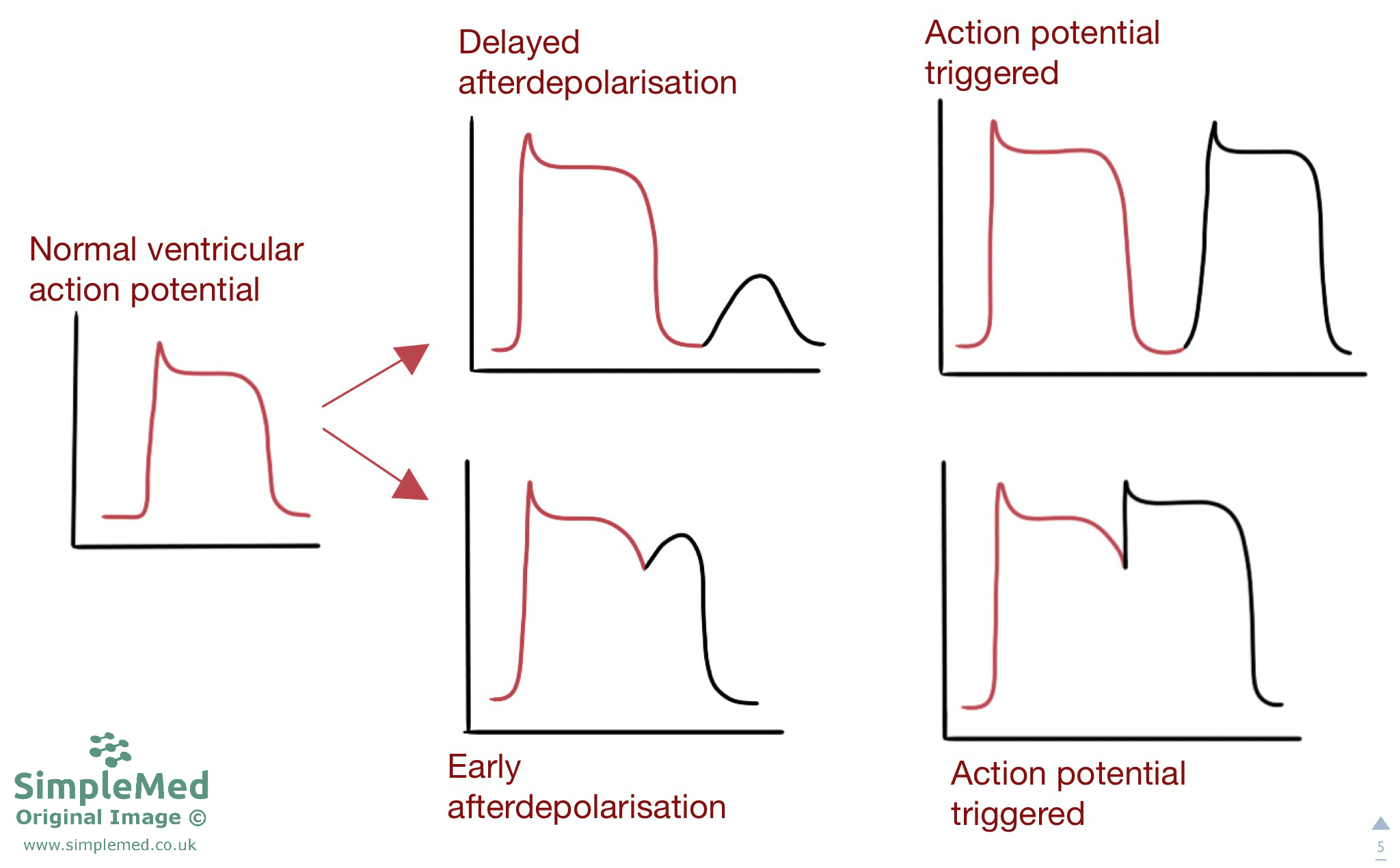 Diagram - The changes in an ECG in delayed and early afterdepolarisations