Embryological Development of the CVS

The cardiovascular system begins development at around the the 10th day after fertilisation. The heart is the first functional organ to develop, with the heart beat able to be heard on sonography by around the 6th week.

Formation of the Primitive Heart Tube

The cardiogenic fields consist of blood islands which are primitive tissues, and mark the beginning of blood, vessel and heart development. These areas develop further and fuse to form two tubes, which are called endocardial tubes, one on each side of the embryo.

In the fourth week of development the embryo begins to fold, which will put the heart tissue in the correct position to form the primitive heart tube surrounded by the pericardial sac. The embryo folds in two directions:

This primitive heart tube is formed at around day 25 of gestation. It is divided into six parts: 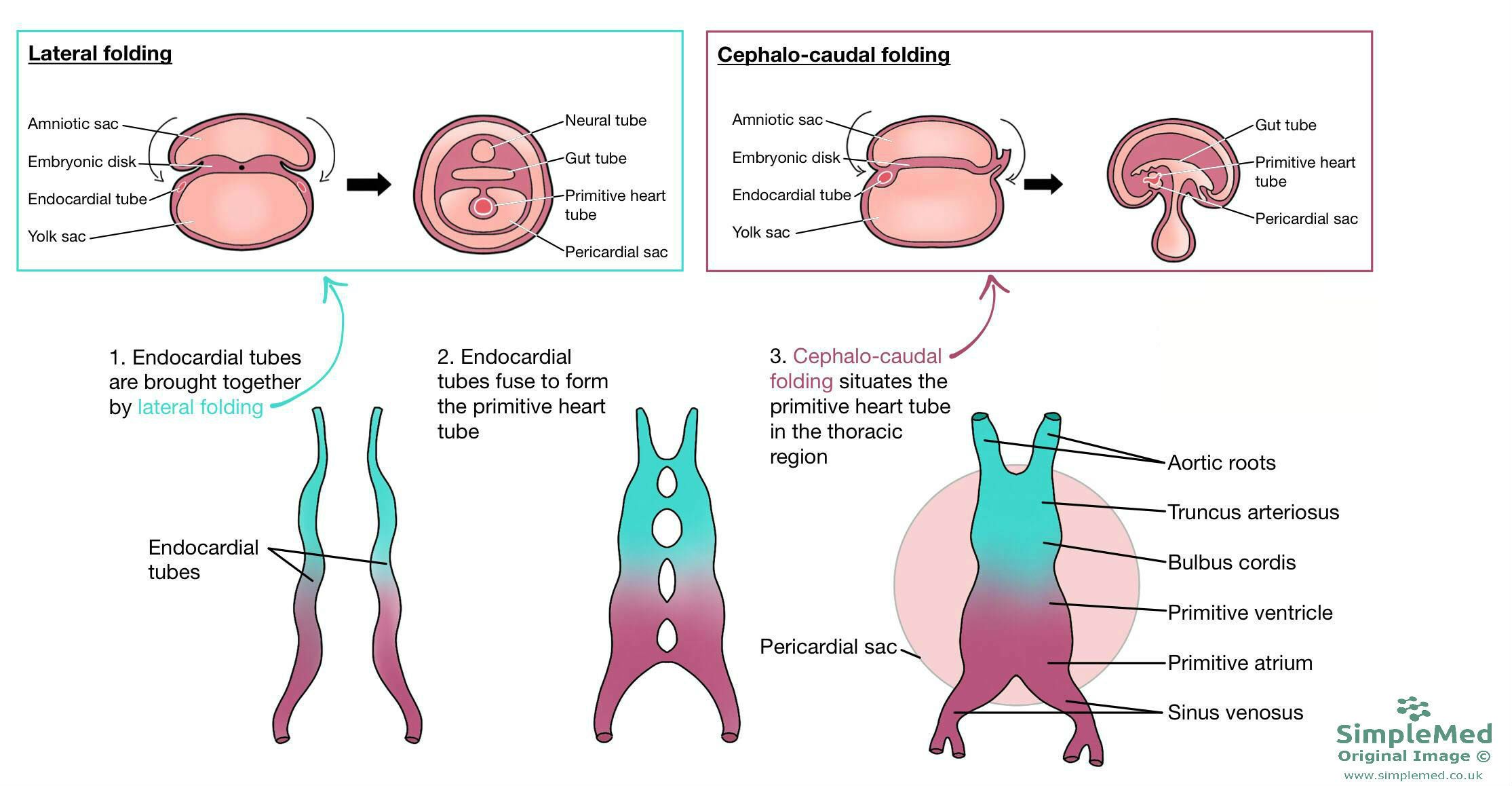 Diagram - Shows how the embryo folds, and endocardial tubes fuse to form the primitive heart tube in the pericardial cavity. The heart tube sits in the thoracic region of the embryo

The newly formed heart tube is surrounded by the pericardial sac. As the heart tube grows and elongates, it gets too long for the sac.

This means that to fit, it must loop. The primitive ventricle moves ventrally and to the right, while the primitive atrium moves dorsally and to the left. This puts the inflow portion of the heart (veins and atria) behind the outflow portion (ventricles and arteries) – the same shape and orientation as mature hearts.

This looping creates a space behind the arteries (aorta and pulmonary trunk) and in front of the superior vena cava, called the transverse pericardial sinus.

Diagram - The looping of the heart tube in the pericardial cavity. When folding is finished, the primitive ventricle is sitting at the bottom of the cavity, with the primitive atrium behind it

Development of the Right Atrium

The right atrium develops from most of the primitive atrium, and part of the sinus venosus.

Development of the Left Atrium

The left atrium develops from a small part of the primitive atrium, and the proximal portions of the pulmonary veins.

The part of the mature left atrium that came from the primitive atrium is trabeculated. This forms the left auricle in the mature heart, which is a little pouch in the wall of the left atrium. The part derived from the pulmonary veins (which makes up most of the future right atrium) is smooth. The auricle is an important feature of the mature heart because with atrial fibrillation (a condition where the atria do not contract efficiently) blood can collect here. This stasis can go on to cause blood clots, which can travel to the brain causing stroke or other organs causing infarction. 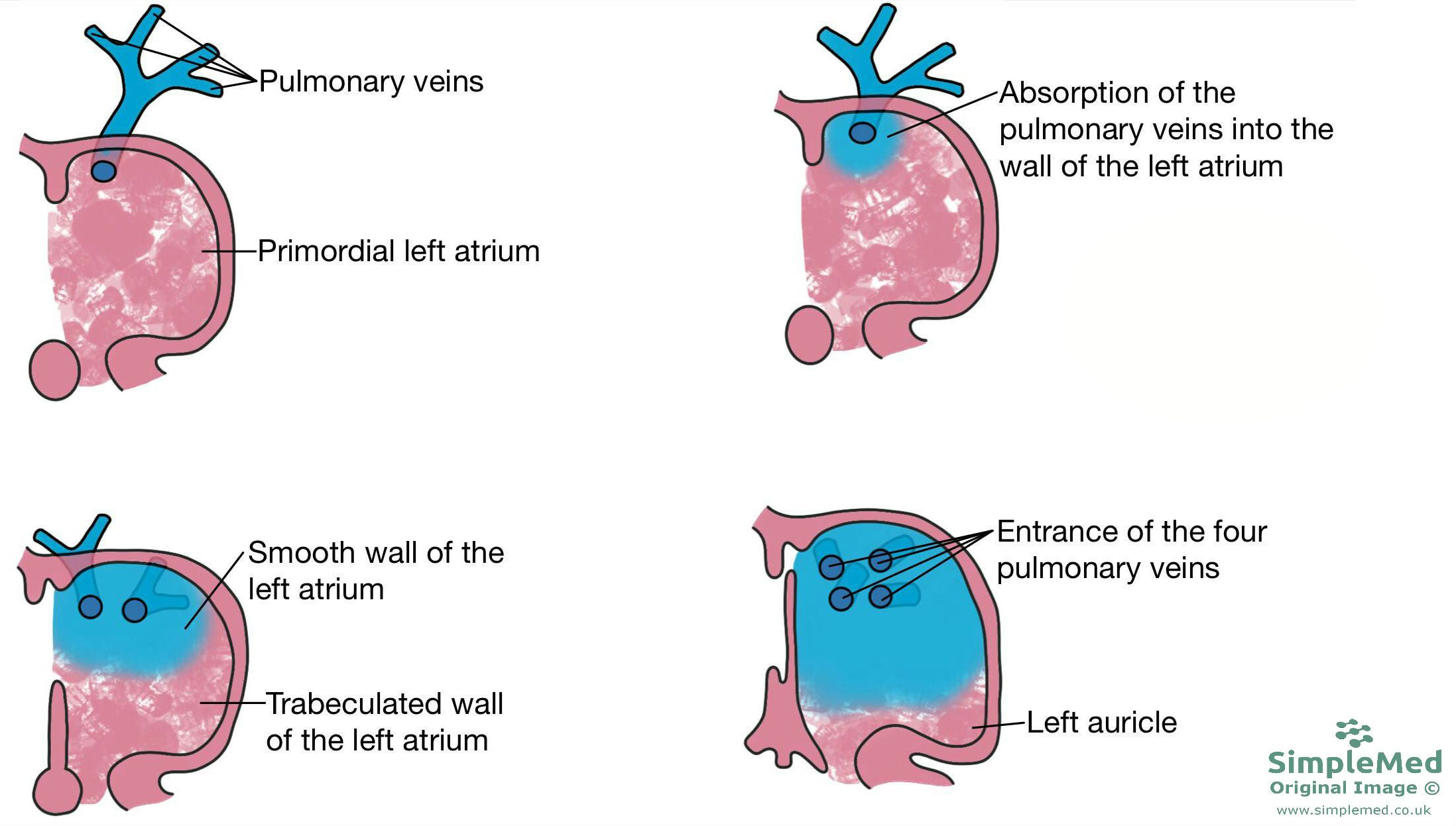 The lining of the dorsal and ventral aspects of the developing heart grow small bumps called endocardial cushions. These grow to meet in the middle of the heart and are key in the separation of the left and right sides of the heart. They act almost as a target for the septa that develop as each septum will grow towards the cushions.

The atrial septum is formed from two septa which grow in a specific order:

These two septa, and two holes together form the foramen ovale - a right to left shunt allowing blood to flow from the right atrium into the left. This shunt will reverse and close after birth, as discussed later. The ostium secundum and foramen ovale are staggered in their orientation and this is key in allowing for shunt closure. 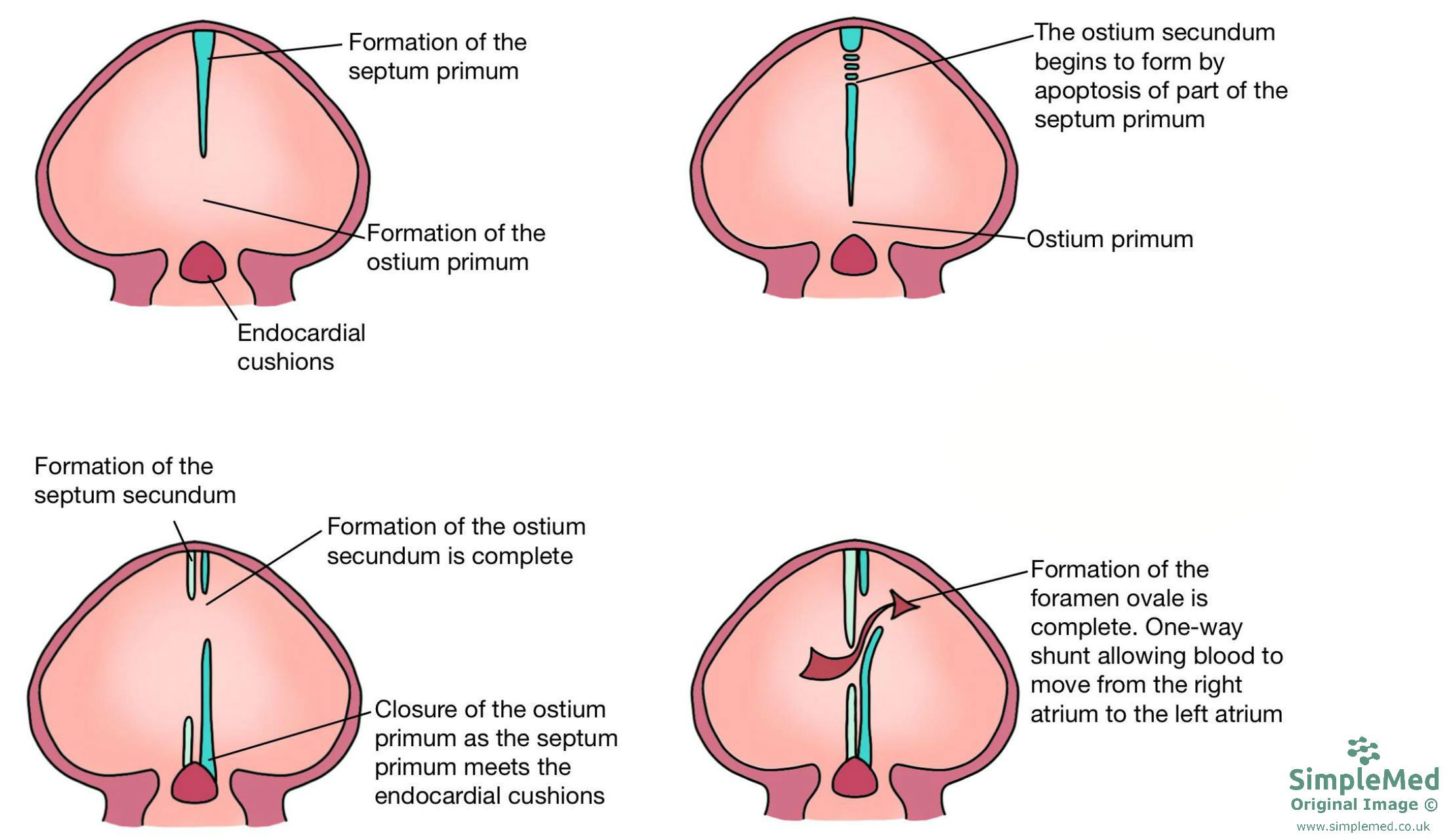 Diagram - The formation of the septum. Also shown is the expansion of the atria by the contributions of the veins

The formation of the ventricular septum take place in two steps.

First, a muscular portion of heart tissue grows upwards from the floor of the primitive ventricle towards the endocardial cushions. It doesn’t quite reach the cushions, forming the primary interventricular foramen. 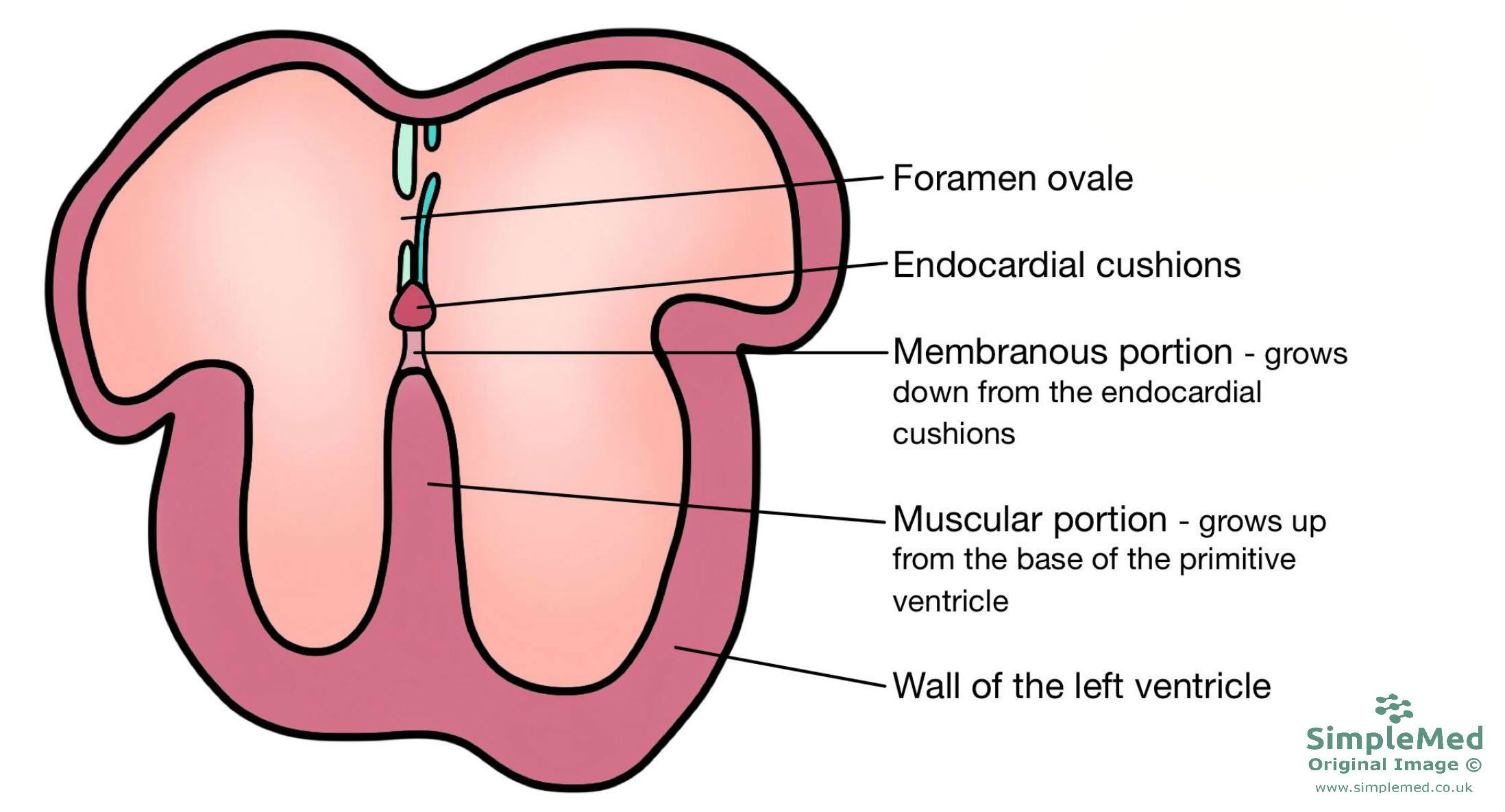 Septation of the Outflow Tract

The bulbus cordis and truncus arteriosus form one tube allowing outflow from the heart. This tube needs to be spilt in order to form the aorta and pulmonary trunk.

In the beginning of this process, there are two lines of proliferations of neural crest cells (these cells appear in the neural tube during neurulation and migrate to contribute to the development of a wide range of structures) on the walls of the outflow tract.

These two lines of cells spiral around and grow towards each other to meet in the middle. This form a single spiral septum called the aorticopulmonary septum – consequently forming the aorta and pulmonary trunk.

Diagram - The formation of the aorticopulmonary septum. It shows the development of the pulmonary artery and the arch of the aorta with its branching vessels

Formation of the Great Vessels

Vessels arise from the truncus arteriosus as aortic arches. There are five pairs of arches, numbered I, II, III, IV, VI (arch V doesn’t form in humans, so there are 5 arches numbered between 1-6 without a number 5). These arches, along with the trucncus arteriosus, contribute to the formation of large arteries:

The fetal circulation works very differently to adult circulation. The following steps outline the flow of blood from the placenta to the systemic circulation of the fetus: 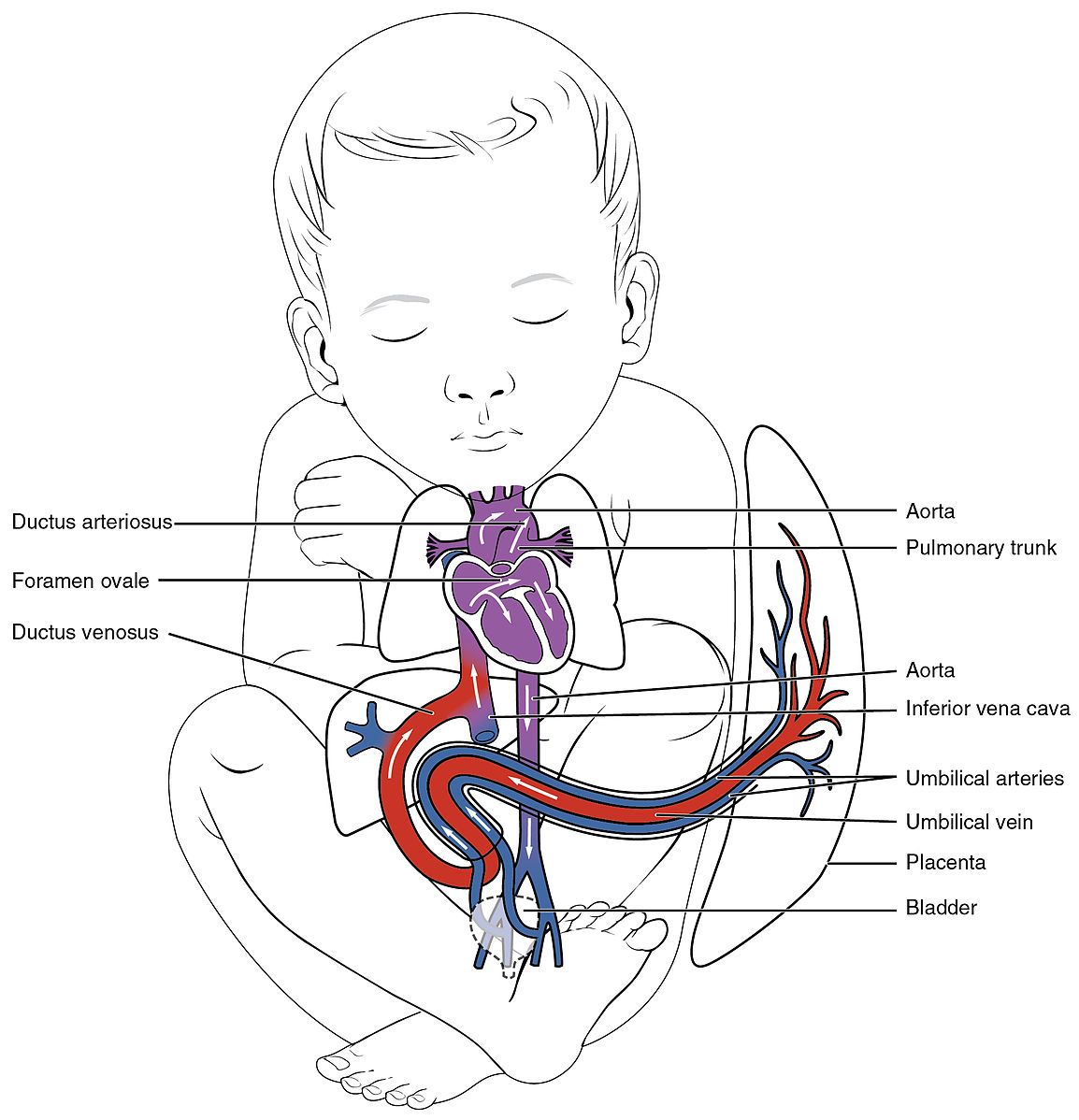 Diagram - The fetal circulation. Blood comes in through the umbilical vein, around the fetal body, and back to the placenta via the two umbilical arteries

Changes to the Circulation After Birth 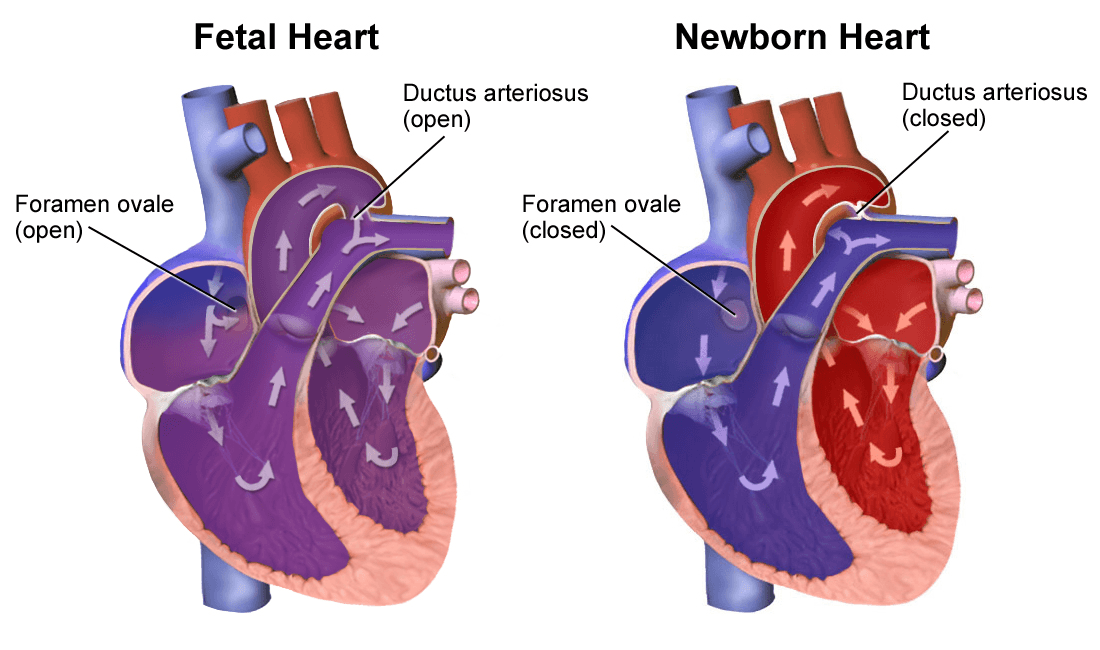 Diagram - The changes that have occurred after the baby has been born. The changes shown are the ligamentum arteriosum (closed ductus arteriosus) and fossa ovalis (closed foramen ovale)