Next Lesson - Structure of Proteins

Deoxyribonucleic acid or DNA is a molecule, which is found in the nucleus of every cell in the human body. It has a double helix structure and It carries the genetic instructions for cell reproduction, growth, development and function.

The width of the DNA chain is 2nm, but the total length of DNA in each cell is around 2m (no you didn’t read that wrong, 2 meters in every cell!) therefore DNA needs to packaged to fit inside each cell. This is achieved by DNA being wrapped twice around a number histone proteins. A histone protein with DNA wrapped around it is called a nucleosome. Nucleosomes are packaged into a thread which under a transmission electron microscope has the classical appearance of ‘beads on a string’. The nucleosomes are further coiled into a solenoid, which has a width of 30nm. Solenoids can be looped and coiled into chromosomes that are seen during mitosis and meiosis.

Chromatin is a complex of DNA and histones with the basic structural unit being a nucleosome. In the nucleus of the cell, there is heterochromatin and euchromatin:

Under an electron microscope, heterochromatin appears dark due to its’ condensed nature and euchromatin is much lighter or not visible.

A gene is a region of DNA that codes for a specific protein. Each gene has a specific location on a specific chromosome known as a locus. There are around 25,000 genes in humans spread across 23 pairs of chromosomes – 22 autosomes and a pair of sex chromosomes.

Both DNA and Ribonucleic Acid (RNA) are nucleic acids (polymer of nucleotides(be mindful of spelling)).

DNA’s primary structure is that of a polymer of nucleotides covalently linked by phosphodiester bonds. These covalent bonds form the supporting ‘phosphate backbone’. The secondary structure of DNA is a right handed double helix with the chains being complementary and anti-parallel to each other. The two chains are bound to each other with hydrogen bonds between the paired purine/ pyramidine bases.

The terms 5 prime (5’) and 3 prime (3’) refer to the distinct ends of the chain distinguished by the 5’ phosphate group and 3’ hydroxyl group.

There are major and minor grooves formed from the double helix structure of DNA and the difference between the grooves is the width. As the width of the major groove is wider, the bases are more accessible, therefore proteins that bind to DNA (such as transcription factors) are able to bind. 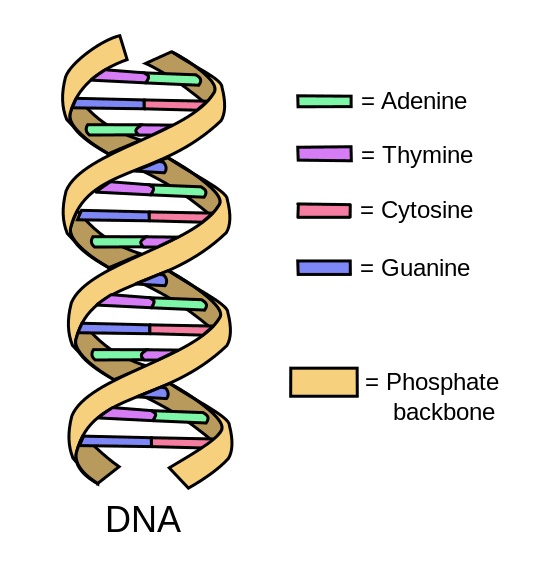 Diagram - The DNA double helix with the base pairings

The bases on each chain form a hydrogen bond with a specific counterpart on the complementary chain to form a base pair. A purine will always bond with a pyrimidine and vice versa.

In RNA this is slightly different (pay close attention to how adenosine pairs):

A way of remembering which base pairs with which can be remembered using animals.

For DNA- GCAT- As G pairs with C and A with T. Imagine a cat with a long tail which curls round to make it look in the shape of a g.

For RNA- GCAU- As G pairs with C and A with U. Imaging a letter G with black and white spots similar to a cow. 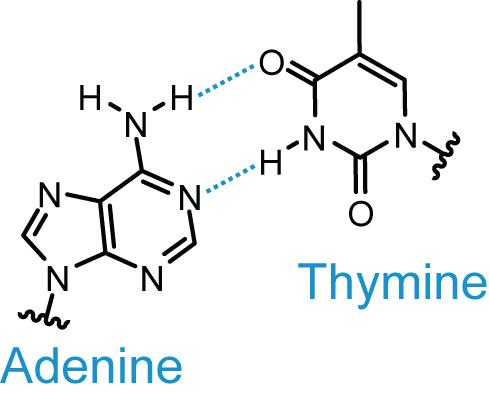 Diagram - The hydrogen bonds between thymine and adenine 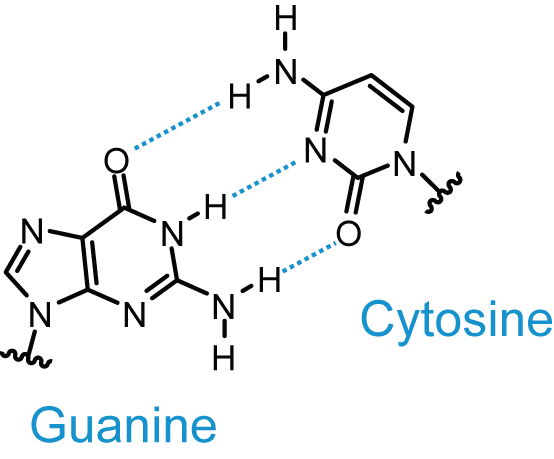 Diagram - The hydrogen bonds between guanine and cytosine

Commonly in microbiology, the nitrogenous bases are shortened to the first letter of their name, for example adenine is shorted to A. As well as this, when depicting a DNA sequence, you begin at the 5’ end on the left to the 3’ end on the right.

Replication of DNA occurs in the Synthesis phase (S phase) of the cell cycle (between Growth phase 1 and 2). The reaction is catalysed by the enzyme DNA polymerase. DNA replication is semi conservative in nature and this process is described below.

The existing DNA can be classified by the position of DNA polymerase. The strand which a single polymerase moves along is referred to as the coding strand (as it provides the code which the polymerase uses to make new DNA). The complementary chain is known as the template strand (as its base sequence will match that of the new DNA produced by the polymerase).

DNA polymerase can only work in the 3’ to 5’ direction so therefore produces DNA in the 5’ to 3’ direction (as it produces DNA complimentary to the coding strand i.e. matches the template strand).

There are three stages to DNA replication: initiation, elongation and termination.

DNA replication is a complex thing to understand, and knowledge found here can be supported by the article in our Genetics series on Mitosis and Meiosis, found here.