Next Lesson - Head and Neck Cancers

Introduction to the Larynx

The larynx (‘voice box’) is a component of the respiratory tract found in the anterior neck. It lies at the level of the C3-6 vertebral bodies and connects the oropharynx to the trachea.

The larynx has several functions: 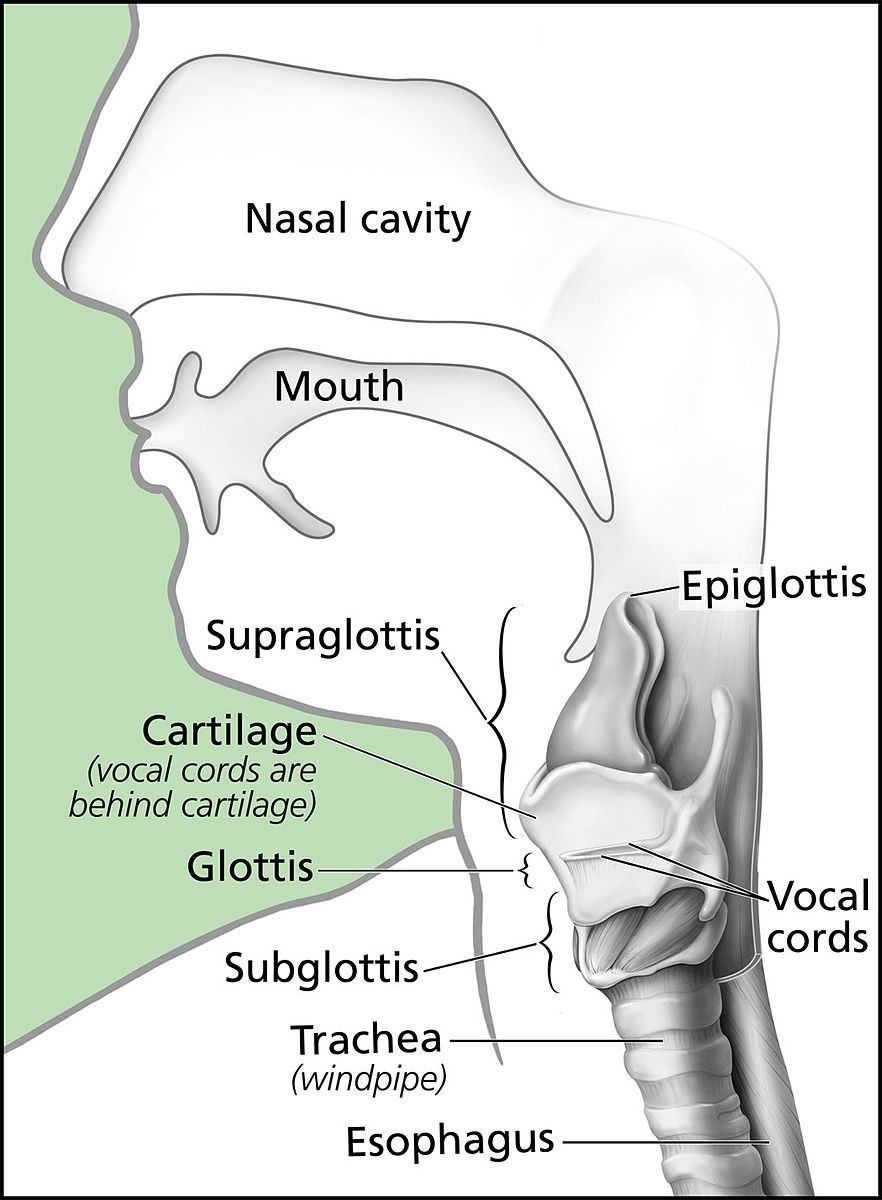 Diagram - Anatomy of the larynx

Structure of the Larynx

The larynx is formed by a framework of cartilages, membranes and ligaments which is all lined by respiratory mucosa.

The laryngeal skeleton consists of 9 cartilages: 3 are single and 3 are paired.

The 3 unpaired cartilages are:

The 3 paired cartilages are:

These cartilages are connected by numerous membranes and ligaments to unite the larynx as a single structure.

Three membranes connect the unpaired cartilages of the larynx to each other and to other nearby structures: 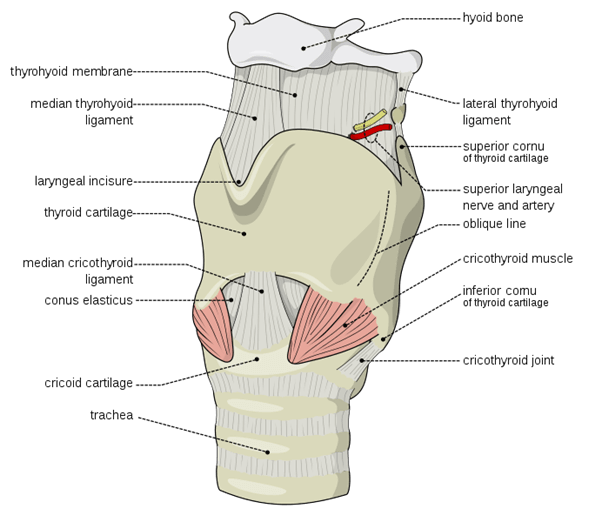 The quadrangular membrane spans between the epiglottis and arytenoid cartilages. The free edges of this form important structures:

The true vocal cord, otherwise known as the vocal ligament, is formed by the thickened superior free border of the cricothyroid ligament. 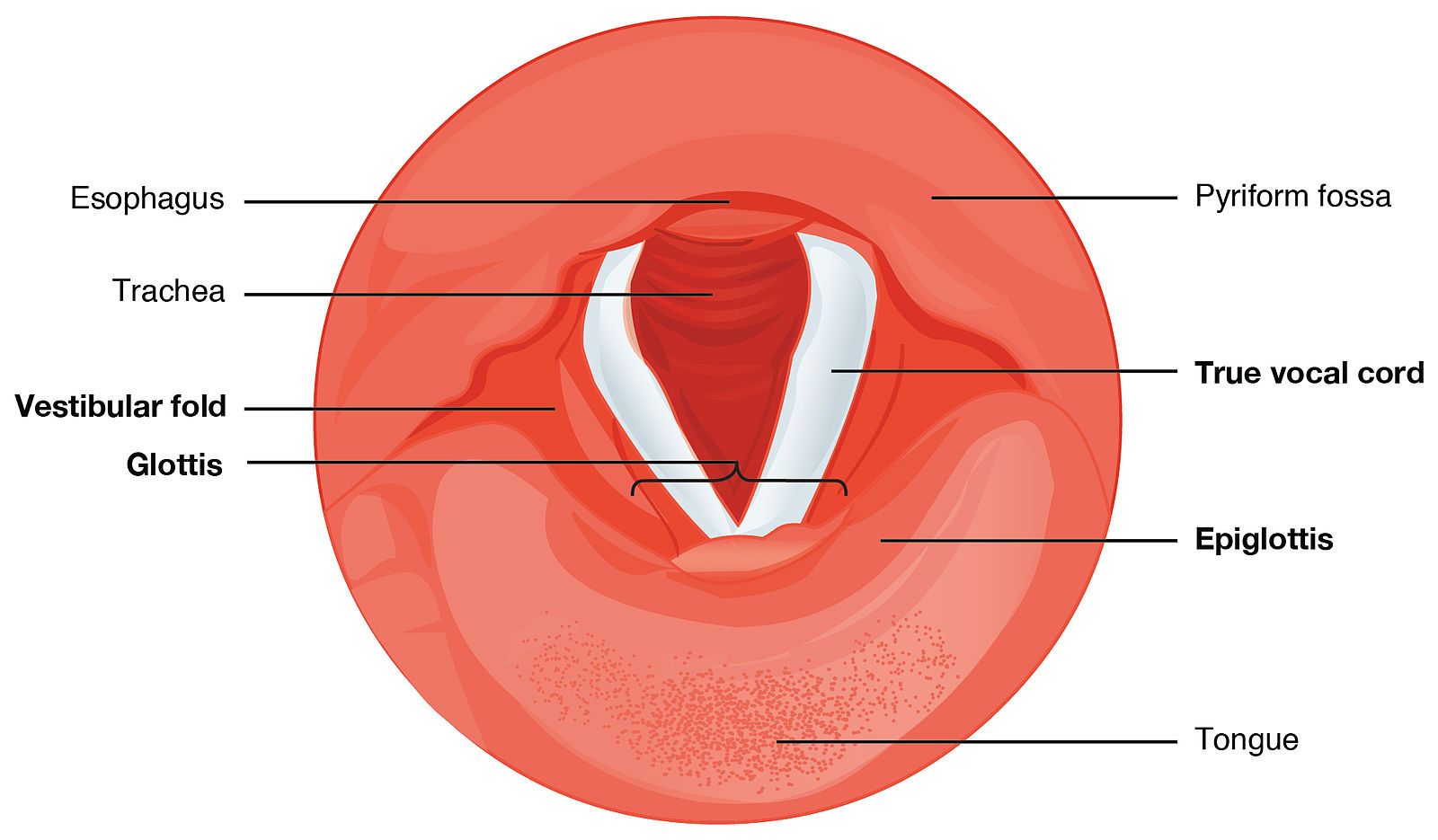 Diagram - View of the larynx and vocal cords on nasendoscopy

The larynx is lined predominantly lined with pseudostratified ciliated epithelium, except for the true vocal cord which is lined by stratified squamous non-keratinised epithelium.

The larynx has many muscles. This article will focus on some of the more important muscles.

In broad terms, there are 2 groups of laryngeal muscles: extrinsic and intrinsic. The extrinsic muscles attach the larynx (directly or indirectly) to other structures and act to move the entire larynx. The intrinsic muscles are found within the larynx itself and act primarily on the vocal cords.

Most of the intrinsic laryngeal muscles (e.g. lateral cricoarytenoid, transverse arytenoid) act to adduct the vocal cords. Other important muscles of note are:

Actions of the Larynx

The larynx executes different movements depending on the action which is being performed:

During swallowing, it is imperative that food/drink does not enter the airway (aspiration). To avoid this, the larynx has several protective mechanisms:

Nerve Supply of the Larynx

The recurrent laryngeal nerve has an important path, branching distally from the vagus nerve and then travelling back on itself towards the larynx: 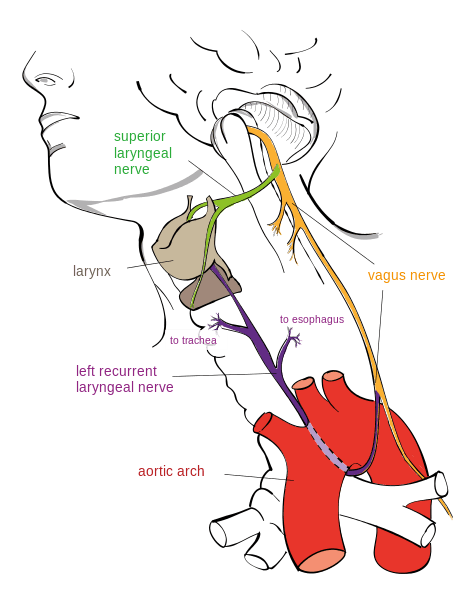 Injury to the recurrent laryngeal nerve leads to paralysis of the ipsilateral vocal cord.

Acute laryngitis is inflammation of the larynx. It is associated with upper respiratory tract infections, most commonly parainfluenza and measles. Symptoms include dry cough, hoarse voice and sore throat. If the inflammation extends to the trachea and bronchi, this is known as laryngotracheobronchitis, or croup. Croup is common in children and is characterised by stridor and a barking cough (which sounds like a seal).

Epiglottitis is inflammation of the epiglottis. It is a medical emergency as the swollen epiglottis can compromise the airway. It presents with dyspnoea, stridor, hoarseness of voice and often drooling. Patient’s must be intubated by a specialist as soon as possible to secure a definitive airway. The most common cause of epiglottitis is Haemophilus influenzae B (HiB) infection. For this reason, children are routinely vaccinated against HiB in the UK.

The airway can also become compromised during anaphylaxis, a severe allergic reaction where histamine release by mast cells results in laryngeal oedema. Securing a definitive airway is a priority in these patients.

Laryngeal nodules (vocal nodules) are benign growths on the vocal cords. They are generally due to voice overuse which causes chronic irritation of the vocal cords. Therefore, they are common singers, cheerleaders, teachers, etc. Patients generally present with voice changes (e.g. hoarse, raspy, low-pitched voice) and/or pain in the throat. Initial treatment is vocal rest, however, if this does not work the nodules can be removed surgically.

Laryngeal cancer often presents with voice changes. Other symptoms include dysphagia, globus and weight loss. On rare occasions a neck lump may be palpable. The mainstay of treatment is surgery. For more information, see our article on Head and Neck Cancers.