Next Lesson - Haemostasis and Clotting 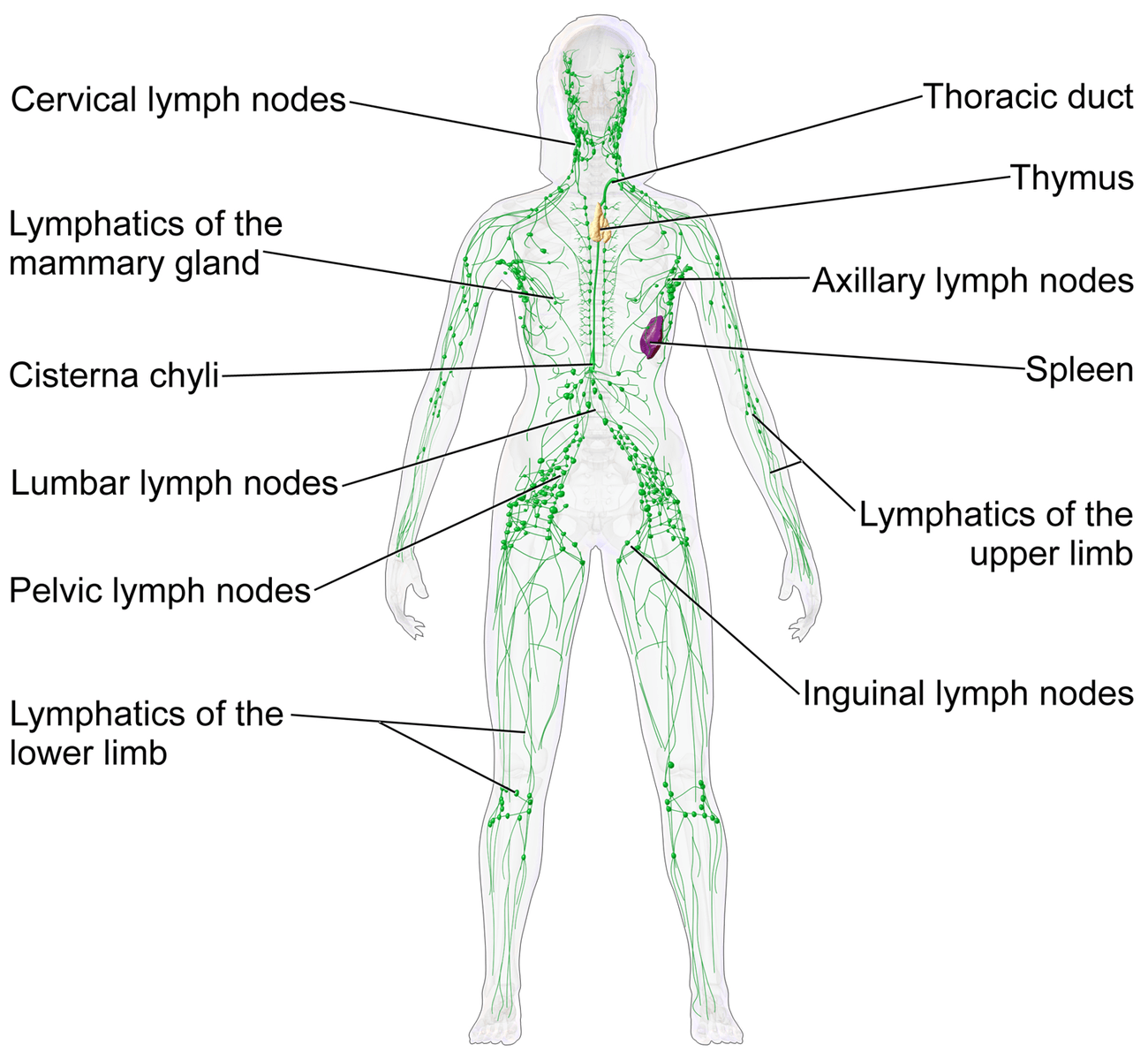 Diagram - Layout of the lymphatic and ducts system within the body

There is high hydrostatic pressure in the arteriole end of the capillary. This forces fluid out into the interstitium. This increases the oncotic pressure (pressure due to proteins) at the venule end, which pulls back most of the fluid. About 20 litres of fluid is filtered out per day. However, only 17 litres are drawn back into the capillaries. The remaining 3 litres makes up the lymph. 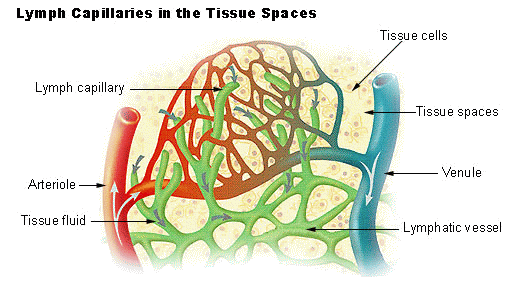 Lymphatic vessels carry lymph fluid and lie adjacent to arteries and veins. Flow within the vessels goes from superficial to deep.

They are made up of loosely overlapping endothelial cells. The overlapping cells form valves, so when pressure is higher in the interstitium, the valves open and fluid can enter the vessel where it is now called the lymph.

Deep lymphatics in the limbs pass through muscles. Contraction of these muscles helps with lymph circulation. Larger lymphatics in the abdomen and thorax have smooth muscle in their walls which contracts to help flow here.

The lymph is drained into ducts which feed into the lowest pressure parts of the circulatory system.

These are the main lymphoid organs. They act as filters for lymph as it travels back to the venous system.

Lymph nodes are present at various points along lymphatic vessels and are often grouped together. Some of these groups are: 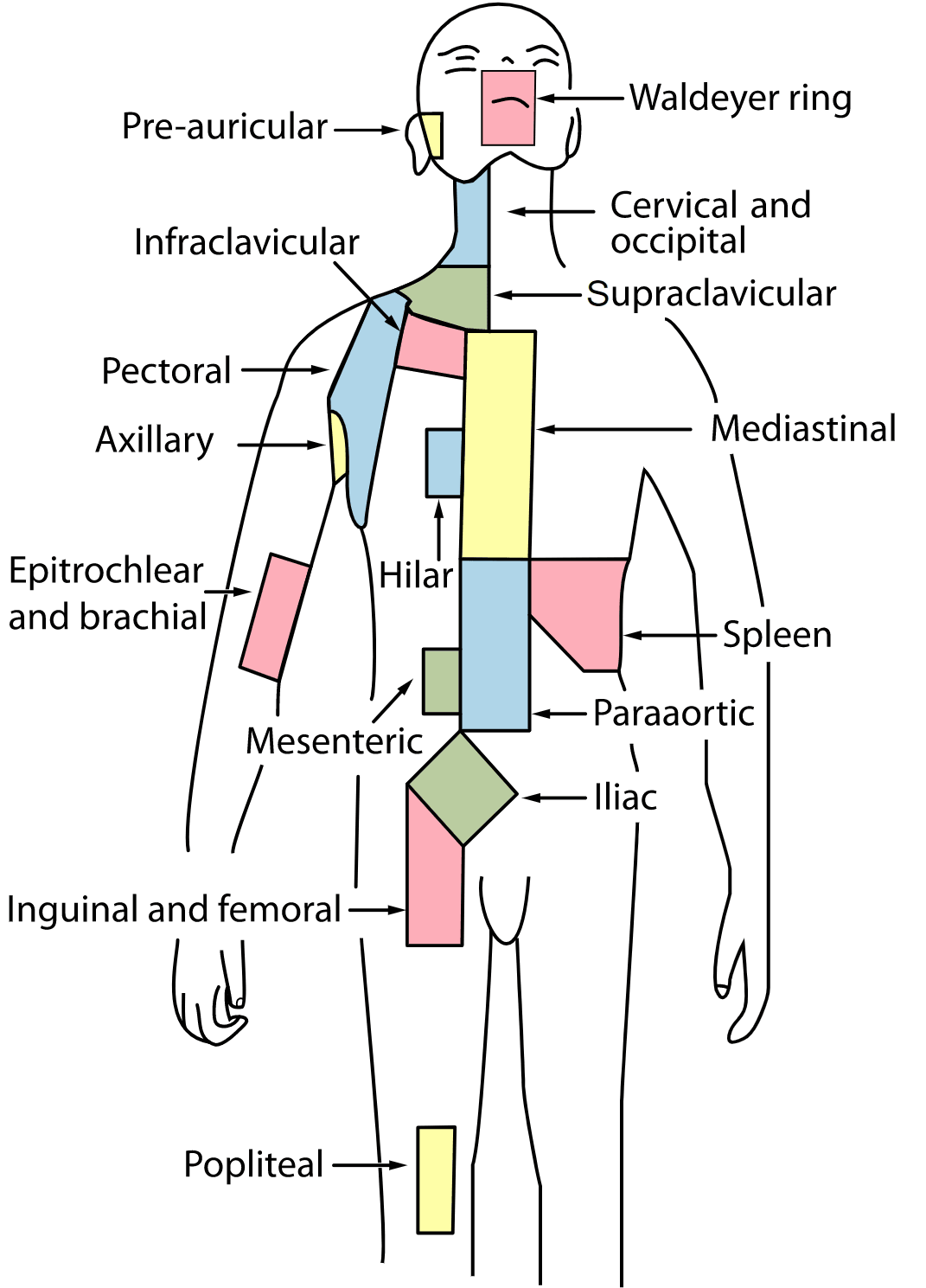 Diagram - Regions that lymph nodes are found in

Lymph nodes are involved in the immune response, so contain immune cells.

When an antigen is first detected, the reaction is the innate response. This is mediated by neutrophils and macrophages. Presentation of the antigen leads to an adaptive immune response.

The specific immune response is a mix of humoral (B lymphocyte mediated) and cell-mediated (T cell mediated). 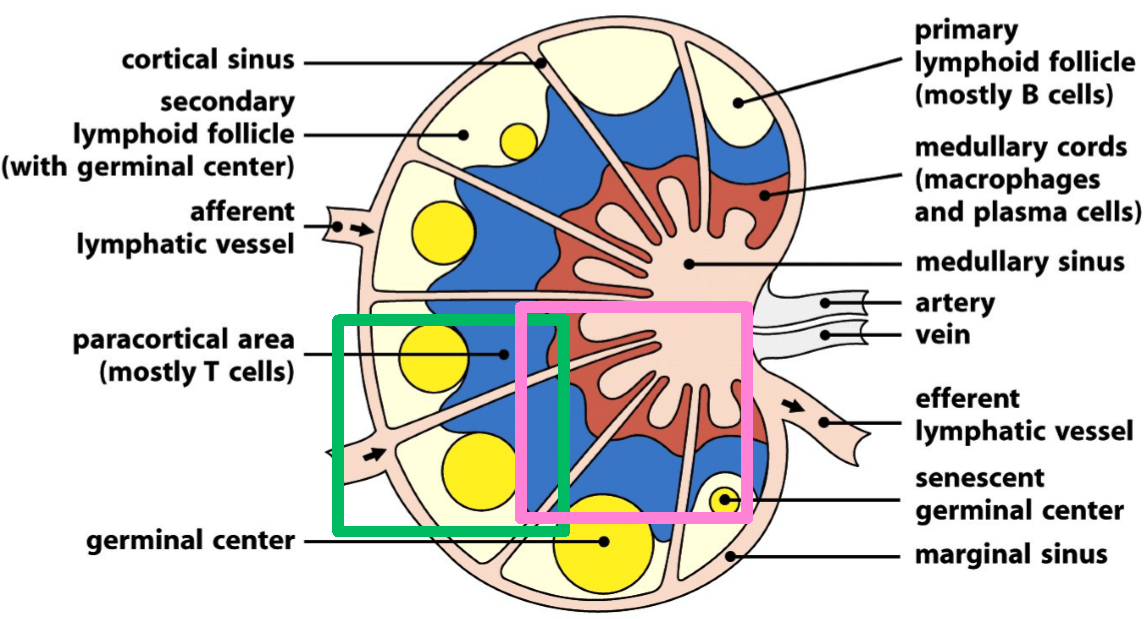 Diagram - A lymph node, showing the filtration system components and different areas of a lymph node

The spleen is an intraperitoneal organ in the upper left quadrant of the abdomen. It has immune and haematopoietic functions and filters blood similar to how the lymph nodes filter lymph. It has a particular role in destroying encapsulated bacteria such as Neisseria meningitidis, which is why it’s important for people without a spleen to have vaccinations against these bacteria.

Table - Functions of the spleen

This is in the superior mediastinum. Its role is the maturation of bone marrow derived stem cells into mature T cells during the early years of life. After pubert­­­y, it decreases in size and is replaced by fat.

An element of the maturation of T cells is thymic tolerance (also called central tolerance). This is the destruction of T cells that recognise the antigens on body tissues as non-self. This process is designed to stop the development of an autoimmune response against the body’s own tissues.

There is also some lymphatic tissue in the tonsils, walls of the gastrointestinal tract and appendix.

This is when there is a collection of lymph fluid due to impaired lymphatic drainage. It commonly affects the limbs, and presents with:

Without treatment, it can become more severe and persistent.

This is swelling of the lymph nodes. It is most commonly caused by infections. Although sometimes it can be caused by cancers like lymphoma or leukaemia, or a metastasis from another organ. Typically cancerous lymph nodes are hard or rubbery and are non-tender.

This is enlargement of the spleen in response to infection. It is usually due to a local infection. But it could be due to a systemic infection such as glandular fever or malaria.