Next Lesson - The Menstrual Cycle

Puberty is a stage in the development of mammals in which sexual maturation and growth are completed, and which results in the ability to reproduce.

Primary sexual characteristics are established before birth and include only the reproductive organs themselves (i.e. the penis, vagina, uterus and testes). These organs only become functional after puberty.

Secondary sexual characteristics are the changes that occur to the body during puberty, including but not limited to, hair growth, somatic growth, breast development and voice changes. These changes are dependent on body mass rather than age. This means that for individuals who are smaller and/or weigh less as a child often begin puberty later. For females, this is seen when periods begin at around 47kg. If females drop below 47kg in adulthood (for example patients with anorexia nervosa) menstruation stops.

Development of secondary sexual characteristics occurs in the same order in each sex, meaning all males and all females develop in the same order even if these stages occur at different ages.
This linear development is demonstrated by the Tanner Scale (stages I-V), which is a series of developmental stages based on breast or scrotal volume and pubic hair growth. The Tanner scale is not routinely used in practice unless there are concerns about a delayed or absent start to puberty, or if puberty seems to have begun but ceased.

The process continues in this order and usually begins between 9-13 years (around 47kg).

The process continues in this order and usually begins around 10-14 years.

Somatic growth (increase in height) occurs in both males and females during puberty. However, men are on average taller than women, and this can be explained by the hormones that are present during puberty. The key hormones at play are oestrogens, androgens (testosterone), growth hormone and insulin-like growth factor 1. Insulin-like growth factor 1 is a hormone produced by the liver with a similar structure to insulin (but no relation to insulin at all) and is important for growth.

The increased amount of oestrogen in females explains why the plates in women fuse faster. Although males do produce some oestrogen, it is a smaller amount than is produced in women. Furthermore, the testosterone produced by the testes acts to delay the fusion of the growth plates.

There are many environmental and genetic factors at work when determining the height a child may achieve. Genetics are key, with taller parents often having taller children. However, there are also other considerations, such as nutrition; a child who is malnourished will not have adequate stores to grow tall and may see their growth stunted.

Puberty is infamous as a time of drastic hormonal changes. Many of these symptoms of puberty are related to the production of oestrogen and androgens (testosterone). However there are many other hormonal changes present.

The Hypothalamus and Anterior Pituitary

The Hypothalamus is a key organ in the endocrine system and through its relation to the pituitary gland is a key regulator in the endocrine system (see our article on the pituitary gland here). The system is mainly governed by negative feedback. The anterior pituitary controls the thyroid gland, adrenal glands and gonads, and therefore controls somatic growth, water metabolism, fertility and lactation among other functions. 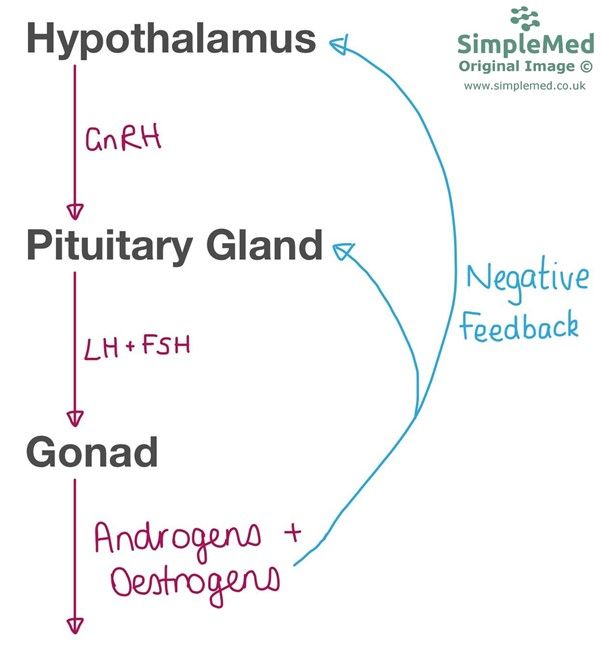 Release of gonadotropin releasing hormone initiates the onset of puberty in both males and females. It is regulated through a negative feedback loop as shown in the diagram above and is coded for by the GnRH-1 gene.

GnRH is released from the hypothalamus overnight due to its relation to circadian rhythm, and in a pulsatile nature, being released every 1-3 hours during sleep. GnRH acts on the membrane receptors of the anterior pituitary gland, and through second messengers, causes a release of follicle stimulating hormone (FSH) and luteinizing hormone (LH) from the anterior pituitary. The increased amount of FSH and LH result in the generation of secondary sexual characteristics, showing physical signs of puberty. This means that GnRH can be described as initiating sexual maturity.

LH release from the anterior pituitary gland stimulates the Leydig cells of the testes to produce testosterone from cholesterol. Due to the release of GnRH overnight, LH release is highest at night, meaning that testosterone levels increase through the night and peak in the morning.

The Leydig cells sit in the interstitium of the testicles, between the seminiferous tubules. These tubules are made up of two types of cells: germ cells (which differentiate to produce sperm) and Sertoli cells.

For more information about the structure of the testicles, see Article 1 of the Reproductive series on the Anatomy of the Man.

In females, FSH and LH act on the ovaries via Gα-s, a specific type of cell surface receptor that prompts cAMP release inside the cell to act as a second messenger. FSH targets granulosa (aka Follicular cells) and LH targets theca interna cells of the oocyte to stimulate production of oestrogens and control the maturation of the oocyte.

There are some rather complicated hormonal changes associated with the menstrual cycle.

Moderate oestrogen production by the ovaries reduces GnRH secretion through negative feedback as shown on the diagram above.

However, high levels of oestrogen alone actually act as positive feedback on the hypothalamus, promoting GnRH secretion to increase the amount of LH in the body. This is called the LH surge, and this prompts ovulation.

For more information on the hormonal balance during the menstrual cycle, as well as the important role of progesterone in modulating the feedback of oestrogen, see Article 6 in the Reproductive series on the Menstrual Cycle and its Disorders.

Inhibin is a hormone produced by Sertoli cells in the testicles and granulosa cells in the ovary. It inhibits the secretion of FSH from the pituitary gland through negative feedback.

Cause mineral retention for use in bone growth.

An adipocyte-derived protein hormone that signals information about energy stores to the central nervous system to inhibit hunger. It is important in regulating neuroendocrine function and is released in a pulsatile pattern and can regulate GnRH release separate to the LH feedback loop.