Proteins are found throughout the human body are play an important role in all biochemical processes:

There are different names to describe the sizes of peptides & proteins:

Amino acids are the building blocks of proteins as the monomers that the final protein structure is made out of. They all have a general structure of central carbon atom covalently bonded to an amino group (NH2), carboxyl group (COOH), a hydrogen atom and distinctive R group (the side chain). 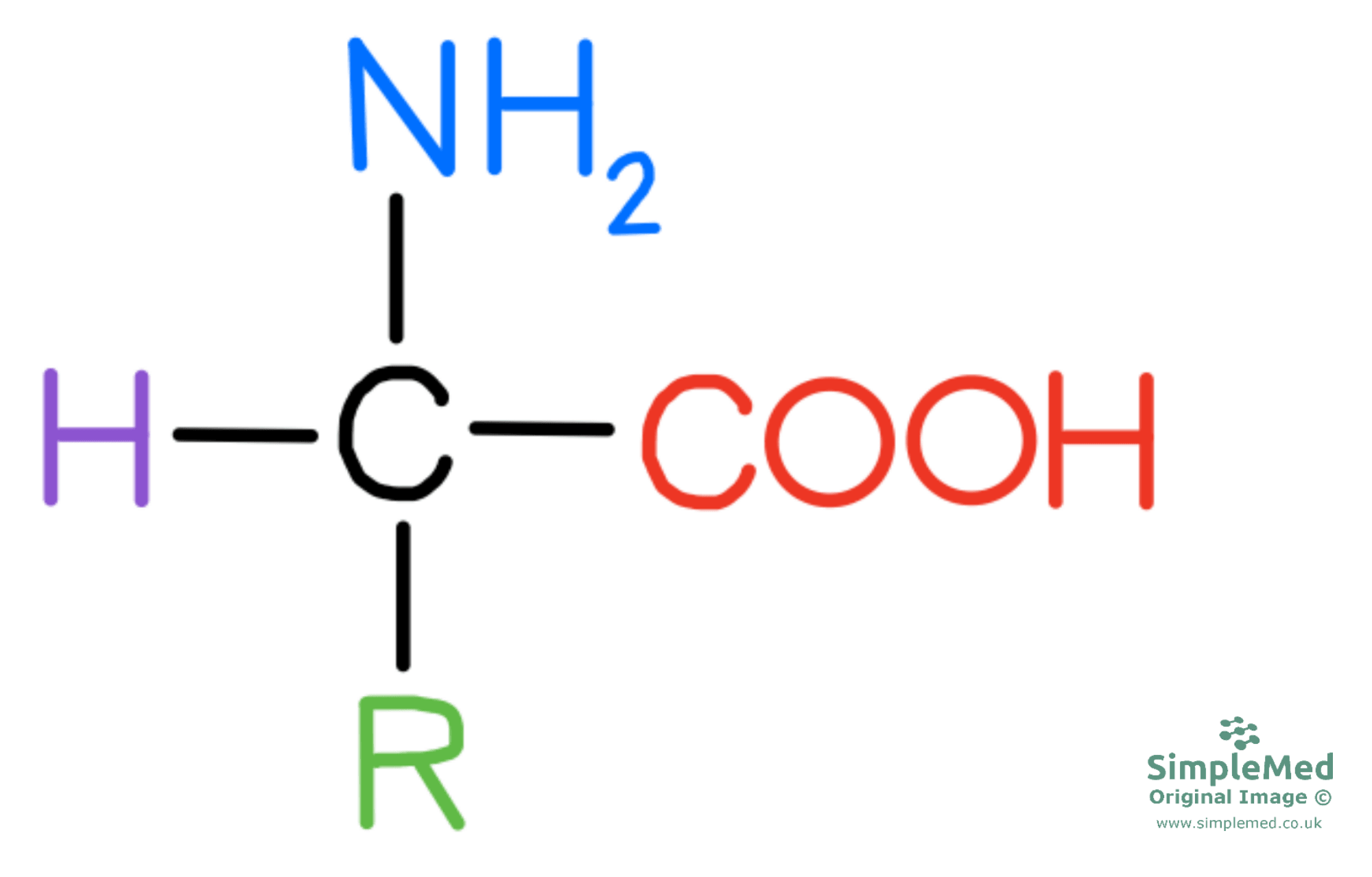 Diagram - The general structure of an amino acid 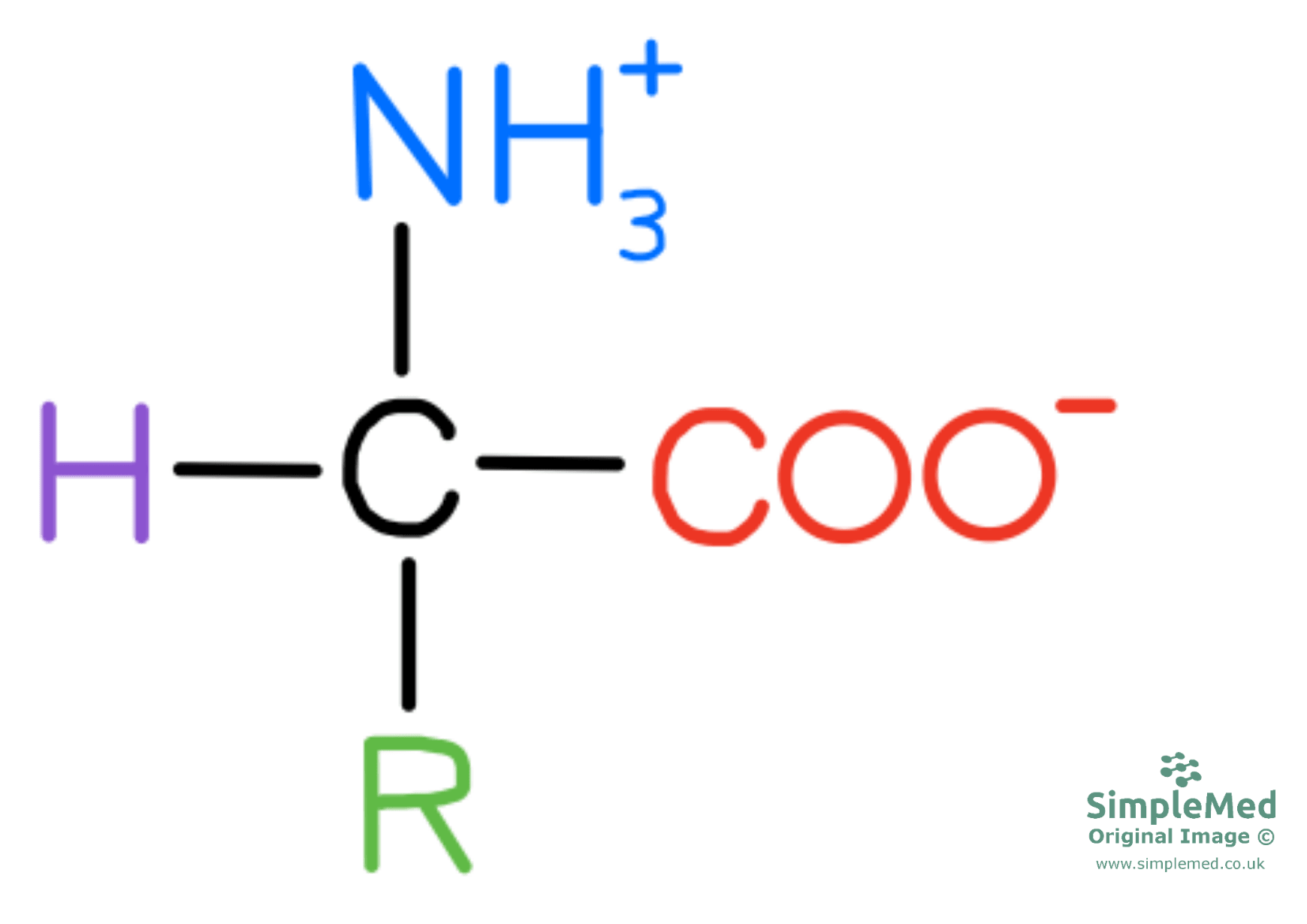 Diagram - The structure of a zwitterion

Diagram - The general appearance of an amino acid residue

Amino acids are classified based by their R group which contributes to the overall function of the protein. The acid-base behaviour of the protein is determined by the R groups of the amino acids. 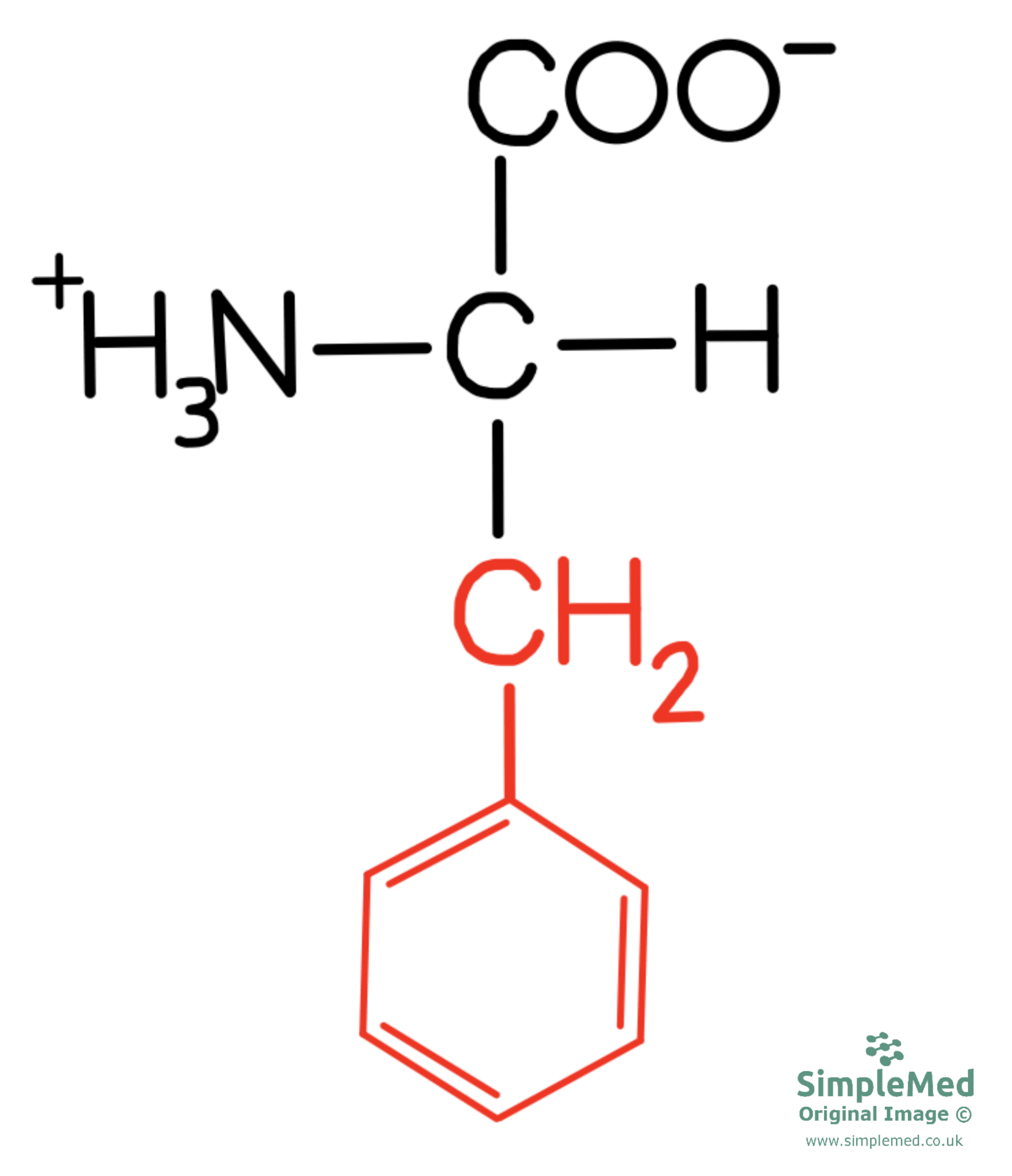 pKa is pH at which there is no overall charge on the molecule and is a measure used to indicate the strength of an acid. Whether an amino acid is positively or negatively charged, depends on the pKR (pK of the side group) value of the side group.

If the pH value of the solution < pKR value then the side group will be protonated (addition of hydrogen ions).

If the pH value of the solution > pKR value then the side group will be de-protonated (loss of hydrogen ions).

The bond formed by linking two amino acids together is called a peptide bond and the reaction to form this bond is a condensation reaction – removal of a molecule of water.

Diagram - The formation of a peptide bond by a condensation reaction

Characteristics of the peptide bond include:

The bonds either side of a peptide bond are able to rotate, allowing flexibility within the 3-D structure of the protein.

The way in which the polypeptide chain folds and the physical characteristic of the protein is determined by the sequence of the amino acids.

The overall structure of a protein determines the overall function of the protein.

Isoelectric point (pI) of a protein is the pH at which there is no overall net charge amongst the structure of the protein.

Examples of proteins and their pI:

Proteins can be covalently bonded to chemical components as well as amino acids. Examples:

Secondary Structure of a Protein

The bonds involved in the secondary structure of a protein are hydrogen bonds. 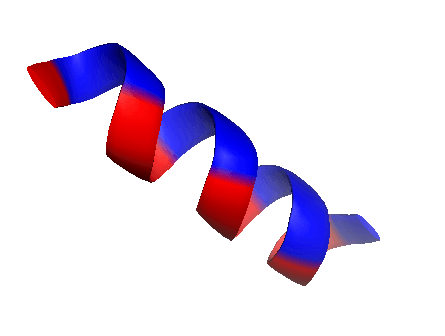 Diagram - The structure of an alpha helix 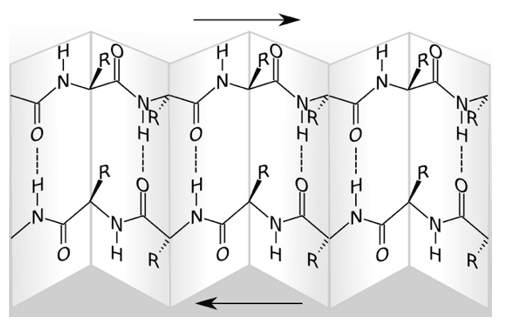 Tertiary Structure of a Protein 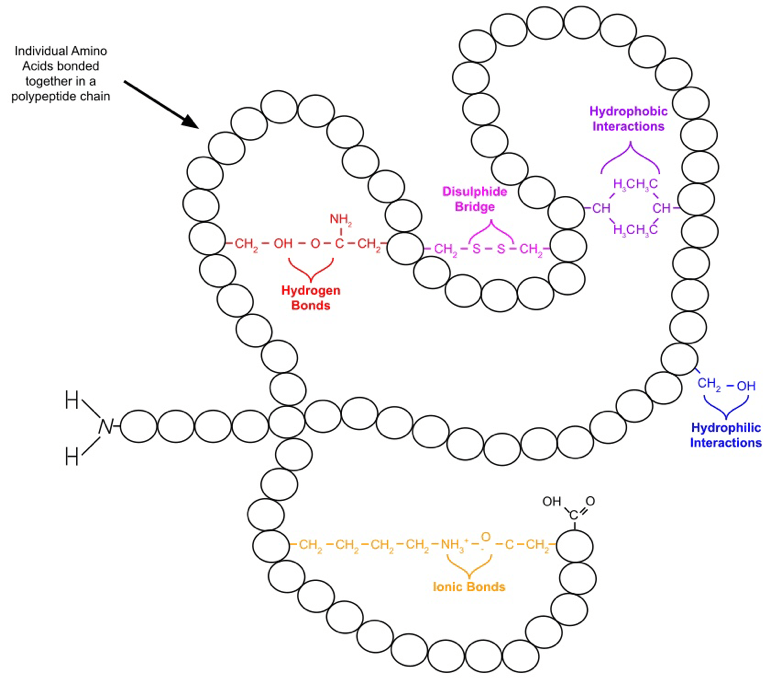 Diagram - The bonds formed in the tertiary structure of a protein

Quaternary Structure of a Protein

Some proteins are made up of two or more polypeptide chains with additional prosthetic groups, this is the quaternary structure of a protein.

One example of a protein with quaternary structure is haemoglobin. A single molecule of haemoglobin is made up of four subunits – 2 alpha chains and 2 beta chains that interact with each other. As well as the four polypeptide chains, there is an inorganic prosthetic group, haem group, which contains iron. The iron molecule is crucial to bind oxygen to be carried around the body. 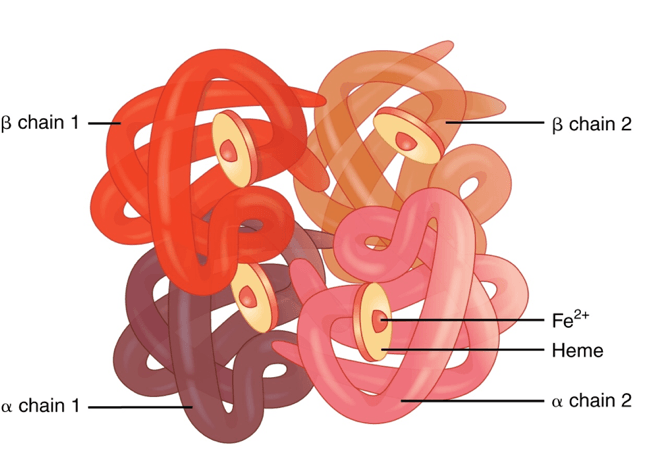 Diagram - The quaternary structure of haemoglobin

Another example is collagen. Collagen is a fibrous protein formed of three polypeptide chains wound around each other with hydrogen bonds between the chains maintaining the structure. Each chain is relatively long in length therefore there are many hydrogen bonds formed which give the molecule great strength. The collagen molecules form covalent cross links with other collagen molecules to further increase the strength of the protein and the cross links are staggered to increase stability of the molecule.

Diagram - The quaternary structure of collagen

Any disruption to the protein’s structure is described as denaturation and involves breaking any of the forces that hold the structure of the protein together.

Proteins within the human body can become misfolded for a number of reasons such as genetic defects and environmental factors. These misfolded proteins can then lead to diseased states.

In Alzheimer’s disease, one misfolded form of beta-amyloid protein (breakdown product of amyloid precursor) is thought to be toxic in the brain in abnormal levels as the protein clumps together to form neural plaques. There is also abnormal accumulation of tau proteins, which are normally involved in stabilising the cytoskeleton of the neurone. The accumulation of these tau proteins prevents the transport system within the neurone by affecting the transport of chemicals within the neurones as well as the synaptic communication between neurones. The neural plaques and tau proteins can affect neural function in the brain and eventually lead to neural cell death. 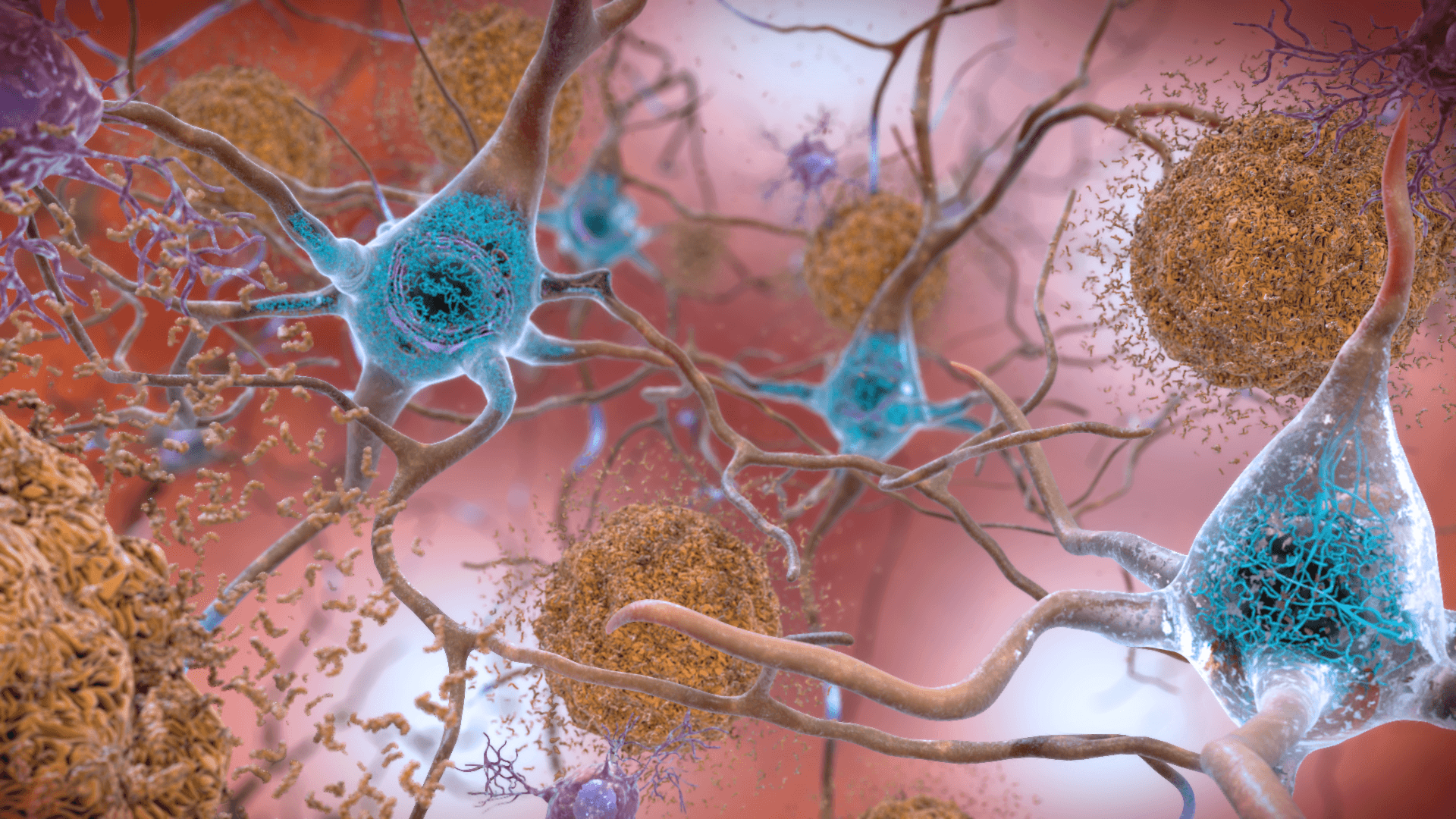