Next Lesson - All done here! Check out our other subjects

Haematology is often used as a method of diagnosis for diseases of many different types, normally through analysing blood from the patient. An abnormal blood result is far more likely to be a result of a systemic disease instead of a patient having specific primary blood disorders. Abnormal results come about when one or more of; the productions of blood cells, their time in circulation and the removal mechanisms for the blood cells are somehow compromised.

The causes of the abnormal results are often multifactorial due to the variety of influences on the blood from systemic diseases. Be it the cause of the disease, any complications, or the treatment itself.

Also known as anaemia of inflammation, anaemia of chronic is a very common disease (the commonest anaemia in hospital patients) and is associated with chronic inflammatory conditions (e.g. rheumatoid arthritis and systemic lupus erythematosus), chronic infections (e.g. tuberculosis) and malignancy.

In any inflammatory response, cytokines (e.g. IL-6) are released from immune cells. This release of cytokines has 3 key effects:

The MCV (mean cell volume) is normal in the early stages of the anaemia, however, the condition will progress to a microcytic anaemia.

The severity of kidney failure in chronic kidney disease (CKD) is usually proportional to the severity of anaemia experienced. Renal function and dysfunction can affect erythropoiesis through several mechanisms:

Normocytic, normochromic or microcytic anaemias are seen upon investigation alongside a high ferritin and a high reticulocyte content. Note that CRP is often raised due to inflammation. To treat the anaemia, you must first treat the CKD. Give EPO supplements and ensure that all the body’s haematinic (B12, folate and iron) stores are sufficient. Note that iron will have to be given IV as it cannot be absorbed due to the action of hepcidin. Final stage treatment is a blood transfusion.

Abnormal blood results in a patient with CKD can be caused by a wide range of factors. Here are a few suggested causes to consider: 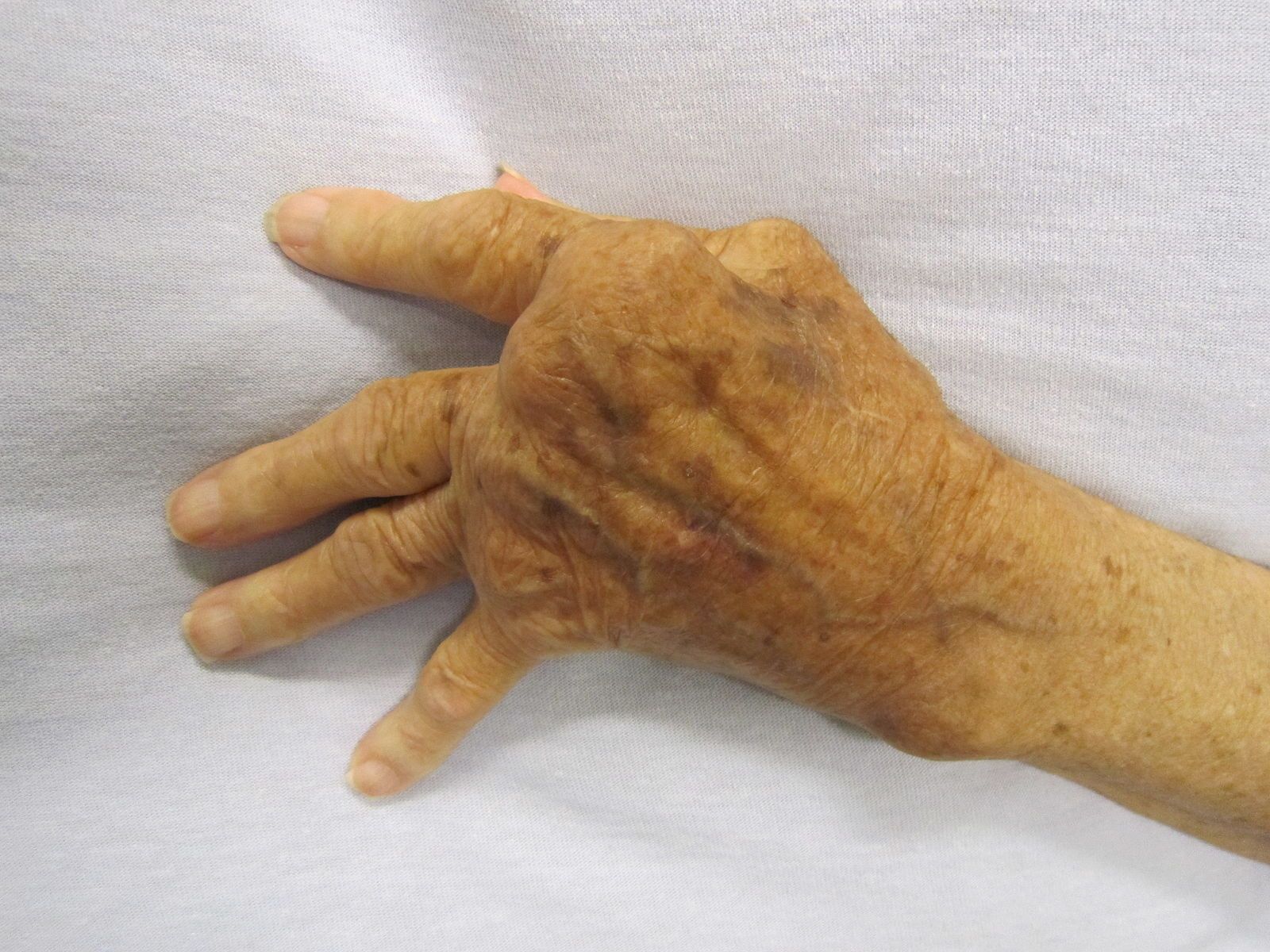 Image - A hand with rheumatoid arthritis

Rheumatoid arthritis (RA) is a chronic autoimmune inflammatory condition which primarily targets the small joints in the hand causing pain and joint stiffness. Growths known rheumatoid nodules can occur in the joints in the later stages of disease. These nodules are made up of fibrous tissue surrounding a central area of fibrinoid necrosis (fibrin and antigen-antibody complexes accumulate within the walls of the blood vessels causing the uncontrolled cell death).

RA is normally treated through anti-inflammatory drugs such as corticosteroids and NSAIDS for pain. Chemotherapy drugs such as methotrexate can also be given to reduce DNA synthesis and so the rate of nodule growth.

Abnormal blood results in a patient with RA can be caused by a wide range of factors. Here are a few suggested causes to consider: 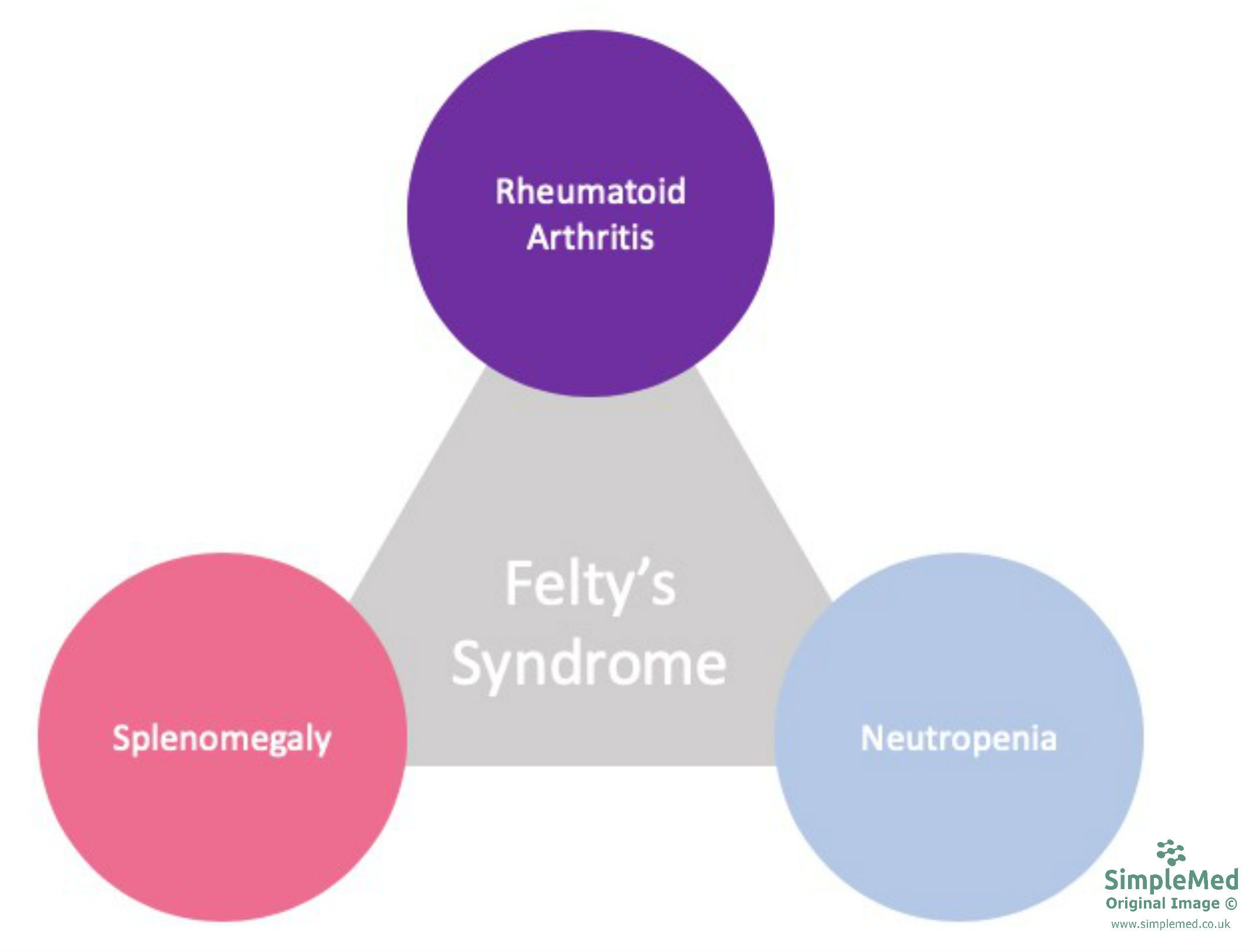 Felty’s syndrome is a triad of rheumatoid arthritis, splenomegaly and neutropenia. Note that thrombocytopenia and anaemia is associated with the syndrome too. The neutropenia can be secondary to the splenomegaly due to the increased destruction rates of white cells by the reticuloendothelial system, the sequestering of white cells within the spleen and a decreased level of bone marrow sensitivity to the cytokines (G-CSF) inhibiting white cell production. The immune processes in rheumatoid arthritis can also lead to the destruction of white cells in the peripheral circulation.

Chronic liver disease (cirrhosis) will lead to portal hypertension as the scarring of the liver restricts blood flow through it. This causes a backup of blood into the portal system and therefore an increased pressure within. This portal hypertension causes a pooling of blood within the spleen and so leads splenomegaly. The splenomegaly causes excess sequestration and removal of cells within the spleen, reducing the red and white cell count.

The portal hypertension can also cause oesophageal and gastric varices. Varices occur at points where the portal system and systemic circulation meet. Due to the high pressure in the portal system, the pressure is relieved by shunting blood through small surface veins into the lower pressure systemic circulation. This increased blood flow through these small veins leads to them becoming enlarged and at risk of bursting and leading to bleeding which can be very severe. The bleeding is exacerbated by the deficiency of vitamin K dependent clotting factors 2 (prothrombin), 7, 9 and 10 which accompanies liver disease. This is as all these factors are normally synthesised in the liver, but with cirrhosis, synthesis decreases. The patient therefore, is at high risk of bleeding exacerbated by impaired clotting. Blood loss in such a manner can lead to anaemia in patients with liver disease and can cause an iron deficiency.

There is also an association with endothelial cells (lining blood vessels) dysfunction and thrombocytopenia.

Platelet counts are low in 75% of liver disease as the levels of thrombopoietin (synthesised in the liver and kidney) are reduced in the liver. Thrombopoietin’s function is to stimulate the production of platelets by the megakaryocytes in the bone marrow. Due to splenomegaly, patients will also pool and destroy platelets in the spleen. (Note some immune causes of liver disease can also produce antibodies against platelets too.) Finally, platelets will function poorly due to the change in chemical profile of the blood caused by the liver disease.

Viral hepatitis (infection of the liver) can cause a bone marrow failure and cause an aplastic anaemia (only fat remains in the bone marrow as all the stem cells have died).

Alcohol is a key cause of liver cirrhosis and so is indirectly linked to all the affects above, however, alcohol can also affect the blood directly itself.

Alcohol in excess is directly toxic to the cells in the bone marrow, and so supresses haematopoiesis causing macrocytic erythrocytes and a thrombocytopenia.

Acetaldehyde (a product of ethanol metabolism) can bind with a protein and attach to the erythrocyte membranes. This causes these erythrocytes to appear as “foreign” as they no longer have the correct antigen profile and so an immune response is mounted against these cells.

As a general rule, alcoholic patients have poor nutrition, so may be lacking in the haematinics (Vitamin B12, iron and folate) and so megaloblastic anaemias are common.

It is common for haematolytic changes to appear post-surgery, particularly a minor thrombocytosis and neutrophilia. It is very important that you contrast these with how the patient was pre-surgery to see if there are any major changes indicative of systemic conditions, or if these changes are just due to the surgery. Anaemias can occur due to blood loss during surgery or dilution of the blood by fluids given during the surgery.

Chronic infections such as tuberculosis and hepatitis B can cause anaemia of chronic disease through long term inflammation of tissues (as explained above).

Other conditions of note include malaria as it causes a haemolytic anaemia. Malaria plasmodium, enter the erythrocyte, multiply and then are finally released when the erythrocyte ruptures.

Most infections also cause a reactive thrombocytosis to try to control the pathogen and prevent any more entering the body.

If the infections are untreated then they can progress to sepsis. Unlike less severe infections, sepsis causes a neutropenia and can lead to a thrombocytopenia due to DIC. DIC is a pathological activation of coagulation. This causes formation of multiple widespread microthrombi. Formation of these microthrombi uses up both the clotting factors and platelets. It puts patients at severe risk of both strokes/occlusive events and of life-threatening haemorrhage. Various clotting tests such as PT/INR and APTT are used to identify this.

Non-haematological cancers can cause different haematological changes depending on their origin. For example, bowel cancer can cause bleeding which may develop into an iron deficiency anaemia.

The treatment of cancer using chemotherapy can cause anaemia, neutropenia and thrombocytopenia as it targets rapidly dividing cells which includes the rapidly dividing progenitor cells within the bone marrow. Damage to these progenitor cells will lead to overall decreased production of blood cells. Therefore, patients undergoing chemotherapy may need supportive blood product transfusions and are at an increased risk of a neutropenic sepsis.

Sometimes cancers can involve the bone marrow and cause an increase in production of the blood cells. See our article on when haematopoiesis goes wrong for more information on these cancers. These cancers can produce leucoerythroblastic blood films, identified by granulocyte precursors and nucleated erythrocytes. (Note this can also be found in septic or shocked patients as well as severe megaloblastic anaemias).

Platelet counts can be high with cancers due to any iron deficiencies or any bleeding alongside the cancer. This can cause issues as patients are at an increased risk of a venous thrombo-embolism such as DVT or PE.