The Adrenal Glands and Adrenal Disorders

Next Lesson - HPA and Growth Hormone

The adrenal glands are situated above the kidneys. They consist of (from peripheral to central) a capsule, a cortex, and a medulla.

The adrenal cortex can be sub-divided into the zona glomerulosa, zona fasiculata, and zona reticularis, which all function to produce different types of corticosteroids, outlined below:

A useful saying to help you remember the different layers of the adrenal cortex and what they produce is 'salt, sugar, sex; the deeper you go the sweeter it gets'!

Diagram: Shows the different layers of the adrenal gland histologically and the hormones each layer produces.

Corticosteroids are an example of steroid hormones that are produced in the adrenal cortex (hence the cortico- in the name). Steroid hormones are synthesised from cholesterol and are lipid soluble hormones that bind to nuclear receptors. They mainly act though modulating gene transcription.

Corticosteroids enter cells through simple diffusion across the plasma membrane, where they bind to glucocorticoid receptors. This binding causes the dissociation of chaperone proteins from the receptor (for example heat shock protein 90), allowing the receptor-ligand complex to translocate to the nucleus, where dimerisation with other receptors, such as Glucocorticoid Response Elements (GREs), can occur. In summary, corticosteroids bind to glucocorticoid receptors, which dissociates chaperone proteins, causing translocation to the nucleus and binding to a nuclear receptor.

Aldosterone is the most abundant mineralocorticoid in the body. It is transported in the blood bound to serum albumin and transcortin to a lesser extent.

The main function of aldosterone is the regulation of plasma [Na+] and [K+], in order to control arterial blood pressure. It achieves this through acting on the distal tubules and collecting ducts of the kidney nephrons, where it promotes Na+ reabsorption and K+ excretion through the Na+/K+ ATPase pump, which causes an increase in water reabsorption. This consequently causes an increase in blood volume and therefore increases blood pressure. Aldosterone release is mainly controlled by the Renin-Angiotensin-Aldosterone-System (RAAS), outlined below: 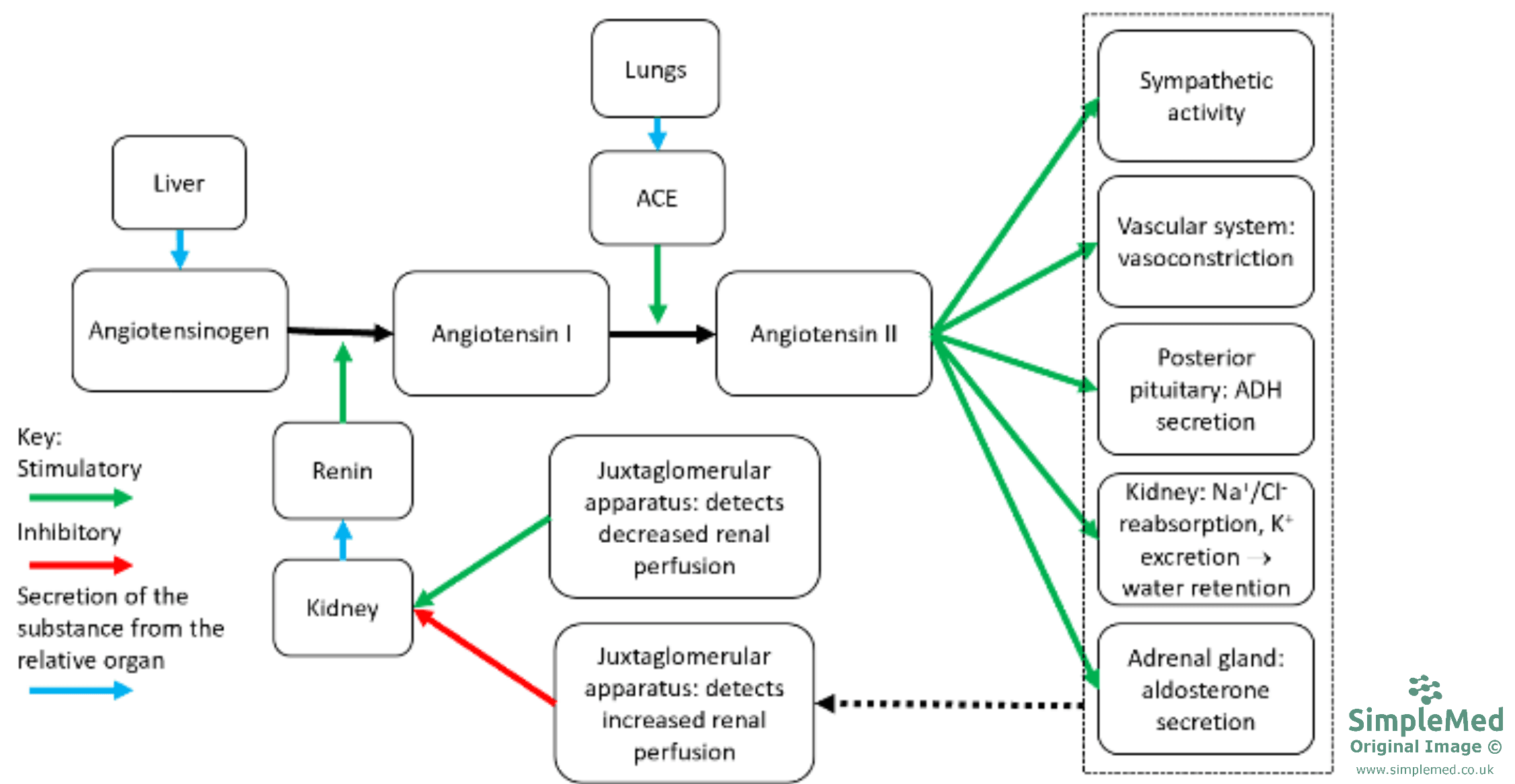 Diagram: Shows an overview of the Renin-Angiotensin-Aldosterone-System. The RAAS is covered in the Cardiovascular Article Hypertension.

Signs and symptoms of hyperaldosteronism include:

Treatment of hyperaldosteronism depends on the cause. Surgical treatment can be used for aldosterone-secreting adenomas, or spironolactone (a mineralocorticoid receptor agonist) can be used for other causes.

Cortisol is the most abundant corticosteroid and constitutes approximately 95% of glucocorticoids. It is transported in the blood bound to transcortin. The levels of cortisol are highest in the morning, and cortisol levels fluctuate during the day in a diurnal rhythm.

Diagram: Shows the negative feedback mechanism in the control of cortisol production.

Cortisol has a wide range of systemic effects:

Cushing's Syndrome is caused by chronic excessive exposure to cortisol. The main cause of is prescribed glucocorticoids, but there can also be endogenous causes:

The signs and symptoms of Cushing’s syndrome include: 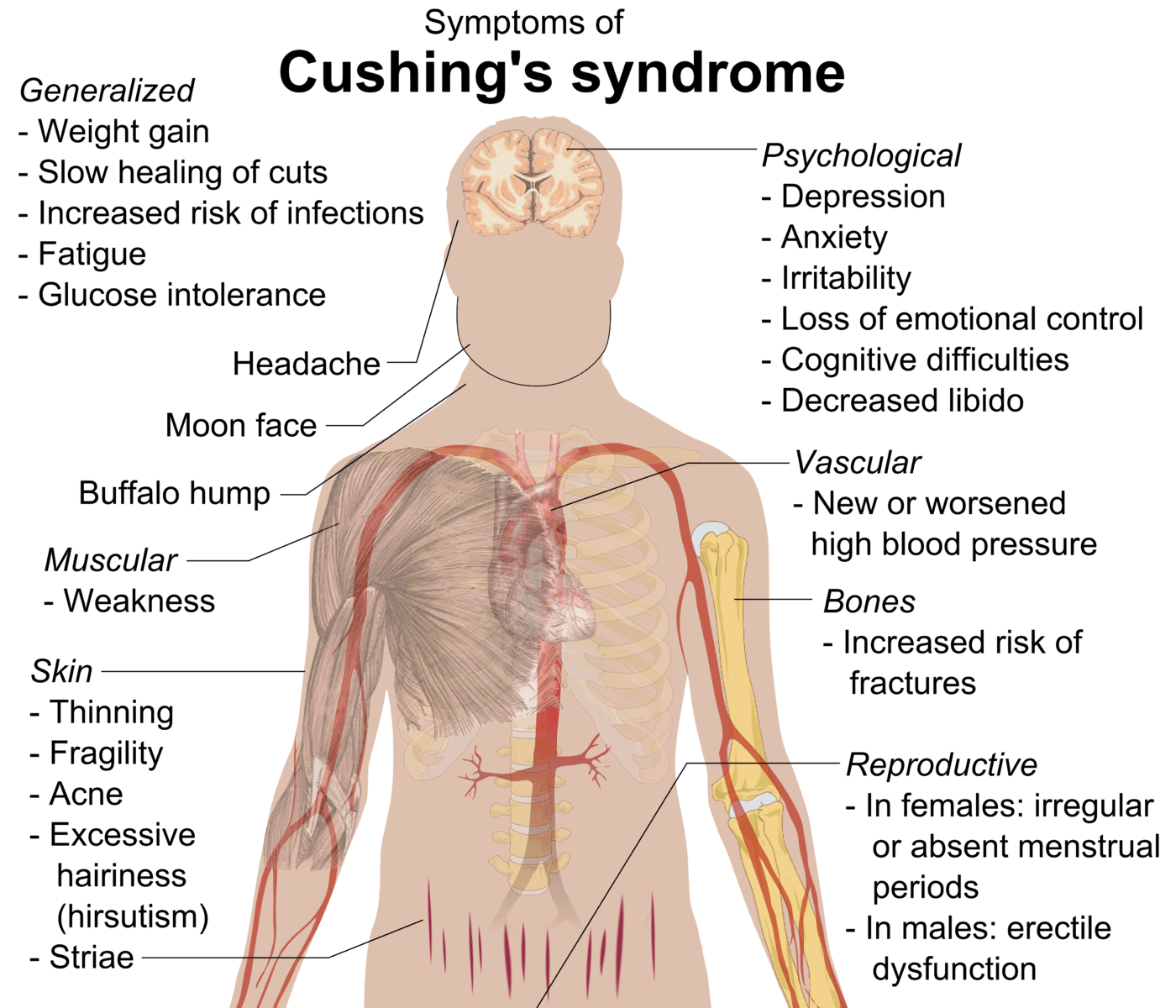 Diagram: Shows the symptoms of a patient with Cushing's Syndrome.

It is important to note that the side effects of steroid drugs (e.g. prednisolone and dexamethasone) are the same as the effects of higher levels of cortisol. Steroid dosage should always be reduced gradually, and not stopped suddenly because the body needs to become accustomed to the lower levels gradually.

Androgens and Genetic Defects in the Adrenal Glands

Androgens are partially regulated by ACTH and CRH.

In pre-pubescent males dehydroepiandrosterone (DHEA) released from the adrenal glands is converted to testosterone in the testes. After puberty this production is insignificant as the testes themselves release testosterone.

In both sexes, androgens promote axillary and pubic hair growth.

A number of clinical conditions can arise as a genetic defect in one or more enzymes required for the synthesis of corticosteroid hormones from cholesterol. This causes a lack of cortisol, which in turn causes secretion of large amounts of ACTH (think about the impact on the negative feedback loop discussed earlier), which in turn causes adrenal cortex hyperplasia.

The severity and consequences of these conditions depend on which enzyme is affected. The most common form of genetic defect is deficiency of the 21-hydroxylase enzyme. The position of the enzyme in the biosynthetic pathway of corticosteroids means that the enzyme deficiency results in decreased glucocorticoid and mineralocorticoid production. The precursor of these hormones (17α-hydroxypregnenolone) is therefore diverted to more androgen synthesis, which can result in genital ambiguity in female infants due to the conversion of this excess androgen to testosterone, and “salt-wasting crises” due to a high rate of sodium loss in urine.

Adrenaline works through associated GPCR receptors, and its actions can be thought of in terms of the fight or flight response.

Diagram: Shows the actions of adrenaline in the body and the receptors it acts on.

A chromaffin cell tumour that secretes catecholamines (mainly noradrenaline). Phaeochromocytomas are histiologically characteristic in that they stain dark with chromium salts.

The characteristics of the tumour are:

The primary treatment of a phaeochromocytoma is surgical resection, but blockading receptors such as through beta or alpha blockers can be useful.

Chronic adrenal insufficiency. This is most commonly caused by destructive atrophy of the adrenal glands by autoimmune response. In the past, the main cause has been tuberculosis, and other, much rarer causes include fungal infection, adrenal cancer, and adrenal haemorrhage.

Signs and symptoms of Addison’s disease include:

The hyperpigmentation seen in Addison’s disease is caused by a decrease in cortisol levels. This means there is reduced negative feedback on the anterior pituitary, and so more pro-opiomelanocortin (POMC) is produced to synthesise ACTH. POMC also produces alpha-melanocyte-stimulating hormone (α-MSH), which causes melanin synthesis, and thus hyperpigmentation. The ACTH itself can also activate melanocortin receptors on melanocytes, thus also contributing to the hyperpigmentation directly.

A life-threatening emergency due to adrenal insufficiency.

An Addisonian crisis can be caused by:

The signs and symptoms include:

An Addisonian crisis can be treated with fluid replacement and cortisol.

Suspected adrenocortical disease is diagnosed through the measurement of plasma cortisol and ACTH, and the measurement of 24hr urinary excretion of cortisol and its breakdown products. In addition, dynamic function tests (e.g. the dexamethasone suppression test and ACTH stimulation tests) may be used in the differential diagnosis of adrenocortical disease. 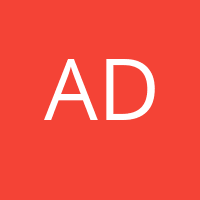 Under the "Aldosterone" heading, for treatments for hyperaldosteronism it says spironolactone can also be used. But it is described as a mineralocorticoid receptor agonist, but that would completely defeat the purpose of the treatment. Is it...

Read More
Avishar Dutta
There are no comments posted here yet