Development of the Reproductive System

The development of the reproductive and urinary systems overlap greatly due to their close proximity and common features. They both develop from the urogenital ridge, a structure made of mesoderm found at the caudal end of the gut tube, formed when the trilaminar disk undergoes folding around week 4 of development.

The important thing to remember when considering the formation of the internal and external genitalia is that developmentally, both sexes start the same, and which structures persist is determined by hormones.

The SRY gene prompts the primitive sex cords to develop the structure of a testicle, forming the medullary cords of the testicle, which will develop into the sperm-producing seminiferous tubules after puberty. The seminiferous tubules are lined with Sertoli cells, which produce a hormone called Anti-Mullerian Hormone (this influences internal genitalia development as described below). In between these tubules are Leydig cells, which start to produce testosterone at around 8 weeks of gestation. It is this testosterone production that determines the formation of both internal and external features of the genitals.

If no SRY gene is present, the primitive sex cords degenerate, allowing the epithelium of the indifferent gonad to develop into a structure called cortical cords. These break up around three months into the pregnancy, surrounding each of the germ cells with an epithelial layer, forming them into primordial follicles (a precursor to oocytes or egg cells).

In the first few weeks of development, the cloaca is an outpouching of the hindgut. It is the site at which the bladder, rectum, and a series of ducts will open onto as development continues. At this early point it is covered by a membrane, and so is not open.

The two ducts that sit in the cloaca are:

These ducts have specific roles within the development of the male and female reproductive tracts.

Testosterone, which has been produced by the Leydig cells of the testes, acts on the mesonephric ducts to form the vas deferens and the epididymis.

Anti-Mullerian hormone, produced by the Sertoli cells of the testes, acts on the paramesonephric ducts and causes them to degenerate.

In a nutshell – The mesonephric duct forms the internal male genitalia.

In the female, there are no Leydig cells to produce testosterone. Without the influence of testosterone, the mesonephric ducts degenerate.

Furthermore, as there are no Sertoli cells to produce anti-Mullerian hormone the paramesonephric ducts do not degenerate. As a result, they continue to develop, forming the uterus, fallopian tubes, and upper part of the vagina.

The lower part of the vagina is formed by a part of the urogenital sinus, which fuses with the paramesonephric ducts to complete the vagina.

In a nutshell – the paramesonephric duct forms the internal female genitalia. 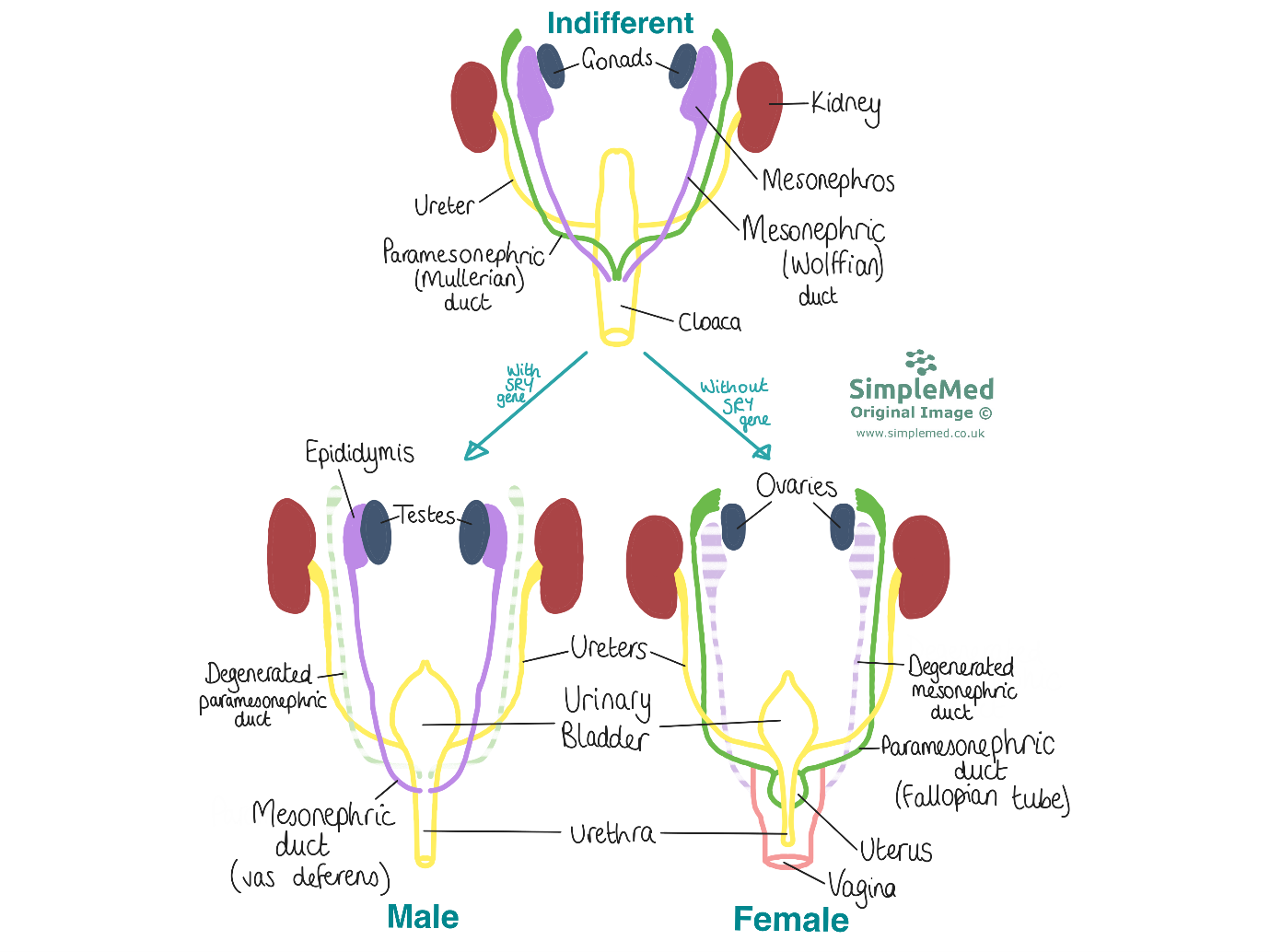 Until around 9 weeks of gestation, the external genitalia of male and female embryos are identical. Up until this point, the genitalia have been developing as part of the cloacal membrane.

Testosterone is produced by the Leydig cells of the testicle, which drives the development of the external genitalia of the male.

The genital tubercle grows rapidly, elongating to form the glans penis. The urethral folds are pulled with it, forming the shaft of the penis, and the two folds fuse at around 4 months of gestation to form the urethra.

This step of development is clinically relevant, because failure of this fusion can lead to hypospadias. Hypospadias is a condition in which the opening of the urethra is not at the end of the penis, but somewhere along the caudal aspect.

The genital swellings move caudally and fuse, becoming the scrotum.

In the female, there are no Leydig cells to produce testosterone. This means that the genital tubercle does not undergo rapid elongation to become the penis, but instead grows slightly to become the clitoris.

Without the elongation of the genital tubercle, the urethral folds do not stretch and fuse, and go on to form the labia minora.

Without the development of the penis, the genital swellings do not need to move caudally, so remain where they are and develop into the labia majora.

The gubernaculum is the fibrous structure that pulls the gonads from the lumbar region where they form into their correct position. It does this by having one end attached to the gonad, and the other to the genital swellings (precursors to the scrotum or the labia majora). The ‘correct’ position varies between male and female, with the testicles ending up in the scrotum, and the ovaries ending up in the pelvis.

As the embryo grows, the gubernaculum stays the same length and as a result provides traction on the testes. It guides the testes through the inguinal canal and into the scrotum.

The gubernaculum remains postnatally as the scrotal ligament.

The ovaries have a very similar path to the testes, and again retain their blood and lymphatic supply from their original position.

However, the ovaries are stopped in their descent by the developing uterus, which prevents the gubernaculum from pulling the ovaries into the inguinal canal.

Instead, the gubernaculum fuses with the uterus and degenerates, forming two ligaments. The ovarian ligament, which attaches the ovary to the uterus, and the round ligament connects the uterus to the labia majora.

Issues with the Development of Genitalia

As with the development of any organ system, the complexity of the process leaves plenty of chance for error. In the genitalia, these errors occur due improper hormone levels.

Increased Testosterone in the Female Embryo

Because this embryo is XX, it has no Y chromosome and therefore no testicles to produce anti-Mullerian hormone, meaning the paramesonephric ducts will remain and develop as normal.

However, with the increased testosterone, the mesonephric ducts, in full or in part, will be maintained and develop.

This means that this embryo will develop with both ducts still present, which can lead to problems with the function of the uterus, as there will be remnants of the mesonephric duct still present.

Androgen insensitivity syndrome is a condition that affects fetuses with the XY genotype. These fetuses as they have a Y chromosome poses the SRY gene, so testes will develop normally, and release the normal amount of testosterone (an androgen). However, the receptors for testosterone are not functioning properly, meaning the embryo is not ‘sensitive’ to the testosterone. This means that the mesonephric ducts do not develop where they should, because the faulty receptor does not respond to the testosterone in effect developing as if no testosterone has been released i.e. along the lines of female development.

However, because the testes are functioning normally, they produce anti-Mullerian hormone, meaning the paramesonephric ducts degenerate as would be normal in a male.

This results in an embryo that has the XY genotype and no uterus due to the degeneration of the paramesonephric ducts, but due to the lack of response to testosterone, will have the external genitalia of a female. As a result children with this condition are often assigned a female gender at birth due to their phenotype.