The Basics of Pathology

Cells can maintain homeostasis (the state of internal stability in an organism) when subjected to mild changes in their environment. More extreme changes will cause cells to undergo physiological and morphological changes in an attempt to remain viable.

However, when cells reach the limit of adaptation, they will begin to show physical signs of injury. In the early stages this injury is reversible and the cell can recover once the environment has returned to normal. If the insult persists or escalates, this can result in irreversible injury which leads to cell death. The degree of cell injury is dependent upon the type, duration and severity of the insult that has occurred.

There are several common methods of common cell injury:

Hypoxia is the deficiency of the amount of oxygen reaching a tissue.

There are four types of hypoxia:

There are four cell constituents that are essential to maintenance of cell homeostasis and if these components are interfered with, it can lead to cell injury. These are the cell membrane, proteins in the cell (structural proteins and enzymes), mitochondria, and the nucleus.

The most common method of cell injury is hypoxia. As the cell is deprived of oxygen, ATP can no longer be produced in the mitochondria and so the ATP-driven cell membrane pumps cease to function; most importantly the Na+/K+ pump. As Na+ ions move down their concentration gradient but are not removed by the Na+/K+ pump, Na+ builds up in the cell. As a result, water is drawn into the cell by osmosis. Cell swelling results and the cell membrane becomes stretched. In the absence of oxygen, the cell will carry put anaerobic respiration to provide ATP. This produces lactic acid, causing the pH to fall and cell proteins to denature. The cell will initiate a stress (heat-shock) response in an attempt to repair damage.

The changes above are reversible and the cell can recover if the hypoxia is corrected. However, in prolonged hypoxia calcium enters the cell due to the failure of the Na+/Ca2+ exchanger, and activates multiple enzymes. Once this happens, the cell injury becomes irreversible resulting in cell death. These enzymes and their effects are listed below:

The cellular organelles will then begin to swell, enzymes will be released and damage other cellular components, and the damaged cell membrane begins to bleb. The morphological changes are explained in more detail later on.

Following this the cell dies, releasing many of its intracellular molecules (such as potassium, cell specific enzymes, myoglobin) into the surrounding tissue. This has general toxic effects on the neighbouring cells and cause local irritation and inflammation. Different cell types have different molecules, and so levels of these molecules in blood tests can be useful for diagnosis. For example, when cardiac myocytes die after a myocardial infarction, they release troponin enzymes which can be detected on a blood test.

If blood flow returns to ischaemic tissues before the cells have died, it is possible for the tissue to be damaged even further. This is called an ischaemia-reperfusion injury. There are several reasons for this, namely the introduction of inflammatory mediators leading to increased numbers of neutrophils in the tissue and activation of the complement pathway. Further damage is caused by free radical production by neutrophils at the site of injury.

Free radicals are reactive oxygen species (ROS) which have a single unpaired electron in their outer shell. This is an unstable electron arrangement, which makes free radicals very reactive, as they very much want to donate or receive an electron in order to become more stable. Free radical species can cause damage to the phospholipid cell membrane, cell proteins, carbohydrates, and nucleic acids. They can also damage cellular DNA, thus also acting as a mutagenic agent.

There are three free radicals which are of significance. These are:

To defend against the free radicals and the potential damage they can cause, cells have a number of free radical defence systems (antioxidants). There are several enzymes which can act on free radicals, including superoxide dismutase (SOD), catalase, and peroxidase. In addition, there are a number of vitamins including A, C, and E which are able to act as free radical ‘scavengers’, neutralising these harmful substances. Finally, there are storage proteins that sequester transition metals such as iron and copper, which stops the metals from catalysing reactions which lead to the formation of free radicals.

For more information on free radicals, see our article on Oxidative Stress

The Morphology of Cell Injury

Under a light microscope it is very hard to distinguish cell death and reversible injury. Additionally, it is difficult to tell if a cell died recently or hours ago. Changes visible can be seen in the cytoplasm, nucleus and cell membrane, with additional abnormal accumulations in the cell.

It is much easier to distinguish reversible and irreversible cell injuries under an electron microscope.

Reversible cell changes include swelling (of both the cell and its organelles), blebs in the cell membrane, clumped chromatin, and the separation of ribosomes from the rough endoplasmic reticulum.

Irreversible cell injury is seen as even further swelling of the cell and its organelles, rupture of lysosomes, membrane defects and breakdown of the endoplasmic reticulum. There are also nuclear changes, such as: 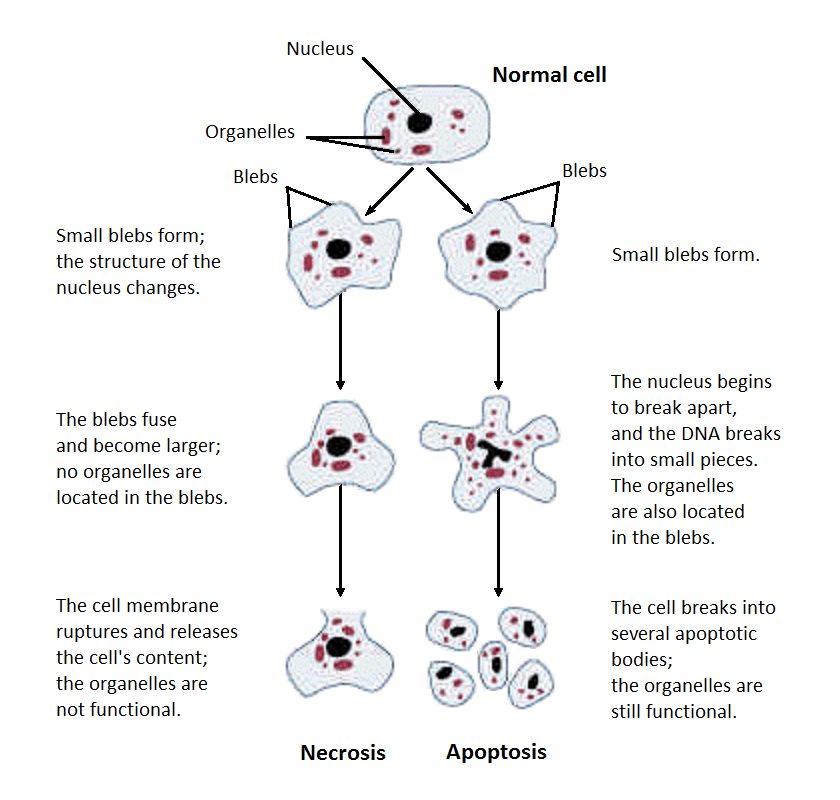 Diagram - The difference in appearance of cells undergoing oncosis (incorrectly called necrosis in this diagram) and apoptosis. Necrosis ends with the rupture of the cells membrane and the release of cellular contents, while apoptosis ends when the cell splits into small apoptotic bodies to be engulfed by neighbouring cells.

Necrosis is the change in appearance seen when there has been cell death. It takes several hours for microscopic changes are visible. Necrotic tissues are enzymatically broken down and then phagocytosed by white blood cells.

There are two main types of necrosis: 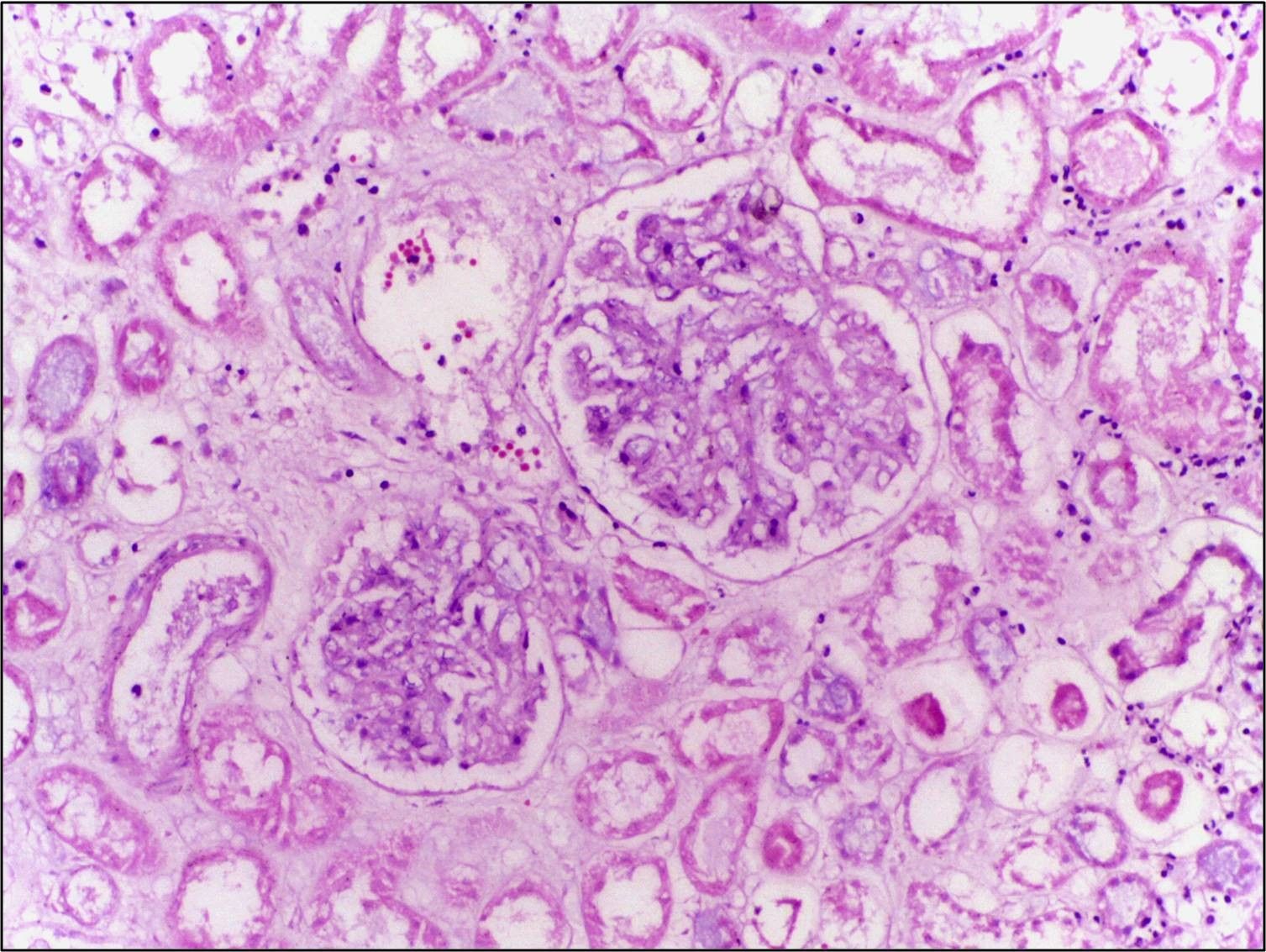 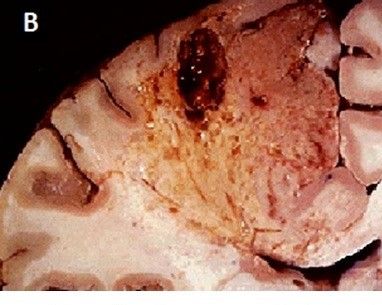 Image - Liquifactive necrosis in the brain. The tissue has lost its structure as the proteins have been digested

There are two special cases of necrosis:

If tissue necrosis is visible to the naked eye it is known as gangrene:

Infarction as a Cause of Necrosis

Infarction is necrosis due to ischaemia. An infarct can appear either white or red depending on the tissue affected.

If an infarct is white, it means that there was little haemorrhage into the infarcted area. A white infarct will therefore occur in solid organs with a single blood supply. For example, this happens in the liver and kidneys.

Conversely if an infarct is red, it is due to haemorrhage into dead tissue, so occurs when the tissue is soft or has numerous arterial supplies. For example, this happens in the lungs due to the dual circulation (the pulmonary and bronchial circulations) as the non-occluded circulation will haemorrhage into the necrotic tissue. In the colon there are numerous anastomoses of the blood vessels so if one vessel is occluded, blood can still enter the area. The other blood supply will not be enough to sustain the tissue though which is why infarction occurs. In the brain, the tissue is soft and also has anastomoses between blood vessels, so when the tissue dies, it collapses and injures surrounding blood vessels causing bleeding.

Apoptosis is cell death with shrinking which occurs as a normal and controlled part of the growth or development of an organism. Apoptosis occurs physiologically in order to balance mitosis, to facilitate hormone-controlled involution (shrinkage) of structures, and in embryogenesis. It can also happen pathologically when cell DNA is damaged, in graft versus host disease, and when cytotoxic T cells kill virus-infected or neoplastic cells.

In contrast to oncosis, the membrane remains intact and there is no swelling. The process is tightly controlled by caspases which degrade nuclear DNA and intracellular proteins.

There are three stages of apoptosis:

As cells age, they accumulate damage over time. There is a limited number of times that a cell can divide, known as the Hayflick limit (around 50 times). When a cell can no longer replicate it has reached its replicative senescence. The limit in divisions is due to shortening of buffer regions of DNA, known as telomeres. These telomeres do not code for any proteins, but rather cap either end of DNA in order to protect the functional DNA from damage during replication. They become shorter with each division of the cell, and once a critical length is reached the cells can no longer replicate and the cell will undergo apoptosis.

This is abnormal deposition of calcium ions in tissues. The two types of pathological calcification are dystrophic and metastatic.

Dystrophic calcification can occur in an area of dying tissue, atherosclerotic plaques, some neoplastic growth, and heart valves. The change is local only so no abnormal levels of Ca2+ or K+ will appear in blood tests.

Metastatic calcification, on the other hands, is systemic and occurs throughout the body. In metastatic calcification there is hypercalcaemia due to abnormal calcium metabolism, resulting in hydroxyapatite crystals being deposited in tissues. It is usually symptomless but, in some cases, can pose a serious risk to health.