All tissues in the body can metabolise glucose (use glucose to produce the ATP they need for cellular processes).

However, some cells can only metabolise glucose (they have an absolute requirement for glucose) because they cannot perform stage 3 or stage 4 of metabolism (the stages of metabolism are introduced here). These cells include red blood cells (lack mitochondria) and neutrophils (specially adapted mitochondria that no longer can produce ATP). This absolute requirement is because only glucose can enter into glycolysis, and only glycolysis can happen without mitochondria.

This also means that the body must be excellent at absorbing monosaccharides like glucose from the gut. This can be done either through active co-transport with sodium (through SGLT1) or passive facilitated diﬀusion (through GLUT1-GLUT5 transporters), both found within the walls of the gut.

Glycolysis is the first stage in aerobic respiration and is the basis for anaerobic respiration. It is made up of ten progressive chemical reactions, split into two phases. It is done in so many small stages because it gives versatility (one of those intermediates might be able to slot into another reaction), fine control (with ten steps it is easy to slow down/speed up/stop at a particular point through the inhibition of a certain enzyme), and it conserves energy (multiple small actions require smaller amounts of activation energy per reaction).

Glycolysis acts as the central pathway of carbohydrate metabolism, and it occurs in all tissues as a cytosolic process. It is exergonic (releases energy), oxidative (causes the reduction of NAD+ to NADH), and with the action of LDH (lactate dehydrogenase), it can be carried out anaerobically.

Functions of glycolysis include:

Glycolysis has 10 stages, 3 of which are irreversible (stages 1, 3 and 10). The irreversible stages of glycolysis are key to know and are mediated by the following enzymes:

Stage 1 is regulated by hexokinase (or glucokinase in the liver)

Stage 3 is regulated by Phosphofructokinase (PFK)

Stage 10 is regulated by Pyruvate Kinase

Diagram - Provides a summary of the reactions in glycolysis

This involves the phosphorylation of glucose, making it negatively charged. This prevents passage of glucose back across the plasma membrane and increases the reactivity of the glucose. It uses up 2 moles of ATP. Reactions 1 and 3 have large, negative, delta G values, meaning they are irreversible.

Reaction 6 captures one molecule of NADH.

Reaction 10 also has a negative delta G, so is irreversible. It is the site of ATP synthesis in glycolysis, meaning that 2 ATP is captured per reaction, meaning 4 in total per glucose. However, there is only a net gain of 2 ATP per cycle, as 2 were used in step 1 of glycolysis.

Each component of glycolysis can be removed from the cycle at any point to be used elsewhere. Each of the substrates in black, involved in the irreversible reactions of glycolysis, have their own unique alternative uses.

The Importance of Step 6

Step 6 produces 2NADH per glucose, meaning that to happen, step 6 needs a supply of NAD+.

Since levels of NAD+ in the cell are constant, the body needs a mechanism to regenerate NAD+ from NADH. In most cells in the body, this is the electron transport chain (the final stage of aerobic respiration that occurs in the mitochondria, part of oxidative phosphorylation).

However, some cells don’t have mitochondria, meaning they cannot perform the electron transport chain to regenerate their NAD+, so they need another method for NAD+ regeneration. This alternative method is also used in anaerobic respiration like exercise or in pathological situations like heart failure (because the electron transport chain needs oxygen to be able to regenerate NAD+, thus anaerobic conditions can lead to the build up of NADH, but no NAD+).

This issue can be resolved via the conversion of pyruvate to lactate via the enzyme lactate dehydrogenase. This process takes in NADH and converts it back to NAD+. The lactate is then transported to the liver for breakdown back into pyruvate.

Diagram - The equation of pyruvate to lactate using lactate dehydrogenase

If however, anaerobic respiration happens for too long and lactate is allowed to build up, this can lead to a number of worrying pathological situations:

Allosteric regulation of enzymes occurs when an activator or inhibitor binds to the enzyme at a site that is not the active site (called the allosteric site), or when the enzyme has covalent modifications made to it like phosphorylation or dephosphorylation. The irreversible steps in glycolysis (1, 3 and 10) are sites of allosteric regulation because high concentrations of the products of those reactions can allosterically inhibit the reaction from taking place.

For example phosphofructokinsase exhibits both allosteric and hormonal regulation: 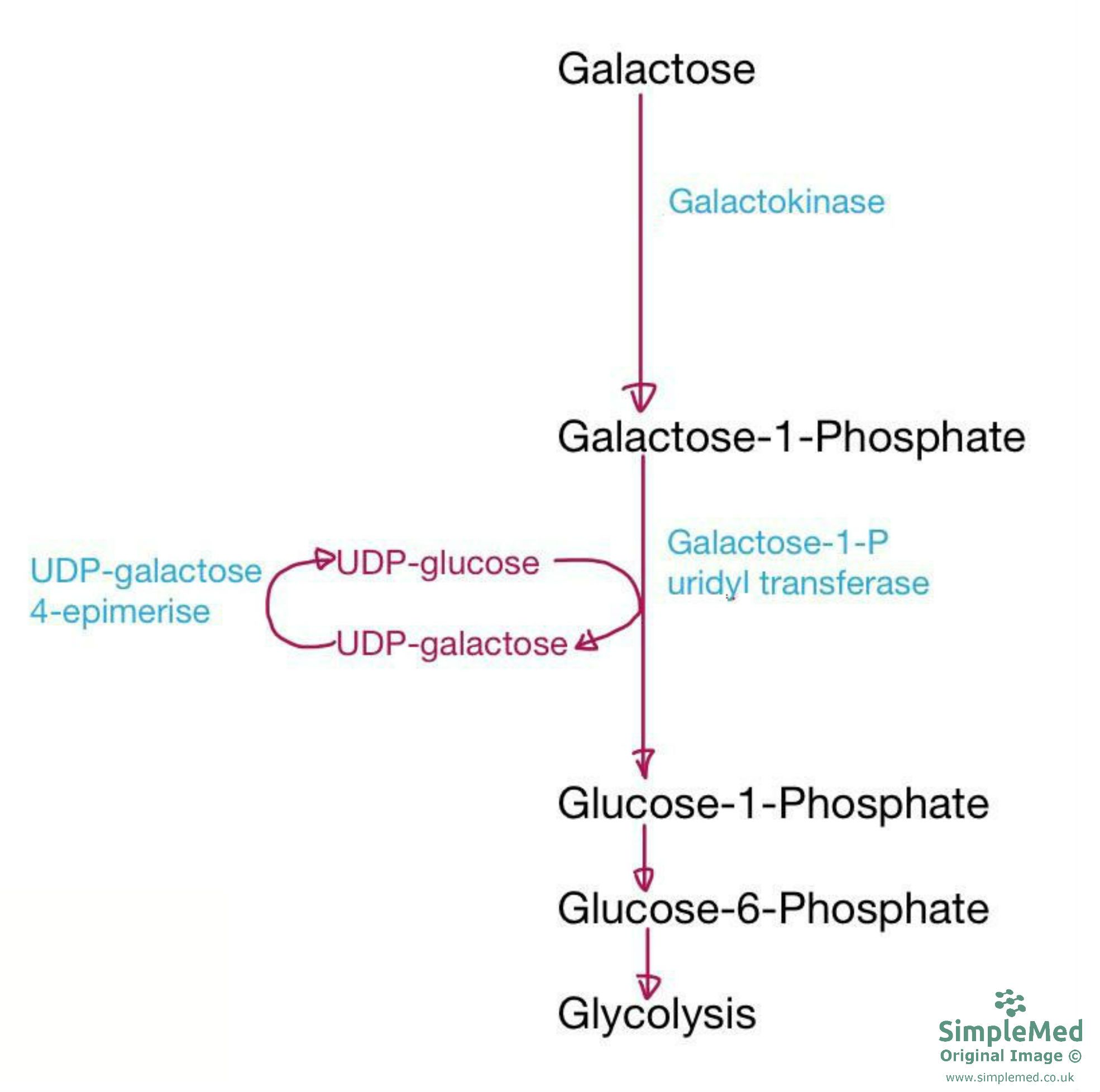 Diagram - The metabolism pathway for galactose, the monosaccharide which (when paired with glucose) makes the disaccharide lactose

Deficiency in any of the three enzymes on the diagram (listed in blue) can lead to Galactosaemia, a condition where galactose or its intermediates build up in the blood. Galactosaemia can lead to cataracts and liver damage, as well as extensive reactive oxygen species damage due to a lack of active glutathione. Galactosemia follows an autosomal recessive mode of inheritance that confers a deficiency in these enzymes.

If galactose is in excess it enters a different pathway to normal and is converted to galactitol using NADPH – this reduces NADPH available. NADPH is needed for the biosynthesis of lipids, the reduction of inappropriate disulphide bonds (absence of which leads to protein cross-linking, which will cause cataracts), as well as glutathione (GSH) regeneration (covered in the article on oxidative stress). Glutathione is used in the clearance of reactive oxygen species (ROS), which are known to damage lipid bilayers and DNA.

The treatment for galactosemia is removal of lactose from diet – galactose is produced from the breakdown of lactose into glucose and galactose.

Lactose is a polysaccharide commonly found in dairy products in the diet. It is broken down into its monosaccharide components, galactose and glucose, via lactase on the brush border of the small intestine, before being absorbed into the body.

In the case of lactose intolerance, the enzyme lactase is not able to function correctly. If lactose cannot be digested and absorbed in the small intestine, it remains in the lumen, lowering the water potential and causing water to be drawn in. This causes diarrhoea (due to the large amount of water) and flatulence ( produced by the bacteria in the gut digesting the excess unabsorbed carbohydrate).

Primary lactase deficiency is caused by the absence of the lactase persistence allele. This means that the patients produce lactase as babies (when their diet is almost exclusively milk), but once dairy becomes less of a part of the diet (normally around 2 years old) their body stops producing as much lactase.

Secondary lactase deficiency is caused by damage to the small intestine, for example through gastroenteritis or prolonged antibiotic use. It can resolve if given time without the oﬀending stimuli, but it can also persist for years.

Congenital lactase deficiency is a very rare, autosomal recessive disease where the patient has no lactase produced at all, leaving them to unable to digest breast milk.

Glutathione helps to maintain proteins in their correct structure by keeping the SH groups in their reduced (hydrogenated) state.

If there is reduced NADPH production (such as in G-6-P dehydrogenase deficiency), inappropriate disulphide bonds can form within cells, causing proteins to aggregate. One mechanism of aggregation occurring is the damage of reactive oxygen species in red blood cells. Damage to the RBC causes Heinz Bodies (denatured haemoglobin) to form, leading them to be removed by the spleen.

The 5C sugar phosphates produced in this pathway can either then be used in RNA and DNA synthesis (which require a 5C sugar backbone) or can re-enter glycolysis by their conversion to G-3-P.