Next Lesson - Control of Plasma Osmolarity

The plasma is the clear fluid that supports the blood cells, and therefore the plasma volume is key in maintaining the supply of oxygen to the key organs of the body.

The major osmotically active solute in the extracellular fluid (ECF) is sodium (Na+). This means that the amount of water in the ECF depends on the concentration of Na+ and if the Na+ concentration changes, so will the volume of the ECF.

The extracellular fluid has two main subdivisions: the interstitial fluid (fluid between the cells) and the intravascular volume (blood plasma). This means that changes in Na+ concentration in the ECF will change the effective circulating volume in the intravascular compartment, and thus change blood pressure (BP).

The ingestion of sodium can vary according to diet – this means it’s very important for the body to be able to control the amount of Na+ it excretes via the kidneys in order to keep the blood pressure stable. In order to maintain BP, the body cannot add and remove water on its own, as this would change the osmolarity (or concentration) of the ECF. The solution to this problem is to add or remove solutes like Na+ (otherwise known as osmoles) and water will follow due to the osmotic pressure differences.

The table below shows approximations for the % of sodium and water reabsorbed at different points in the nephron:

Important to note from this table is the variable percentage of water absorption in the collecting ducts, depending on the dehydration status of the body. Also, that the different limbs of the Loop of Henle are permeable to different things.

There are a number of factors which influence renal sodium excretion.

When BP in the renal artery increases, there is a reduction in the number sodium-hydrogen (Na-H) antiporters and reduced sodium-potassium (Na-K) ATPase activity. This means less Na+ is reabsorbed from the PCT – meaning less water is reabsorbed too. The result of this is the intravascular fluid volume decreases, as does BP.

Reabsorption in the Nephron

Different segments of the nephron have different transporters for sodium in the apical (filtrate side) membrane:

Please note, this is not a complete list, there are many other types of sodium transporters. 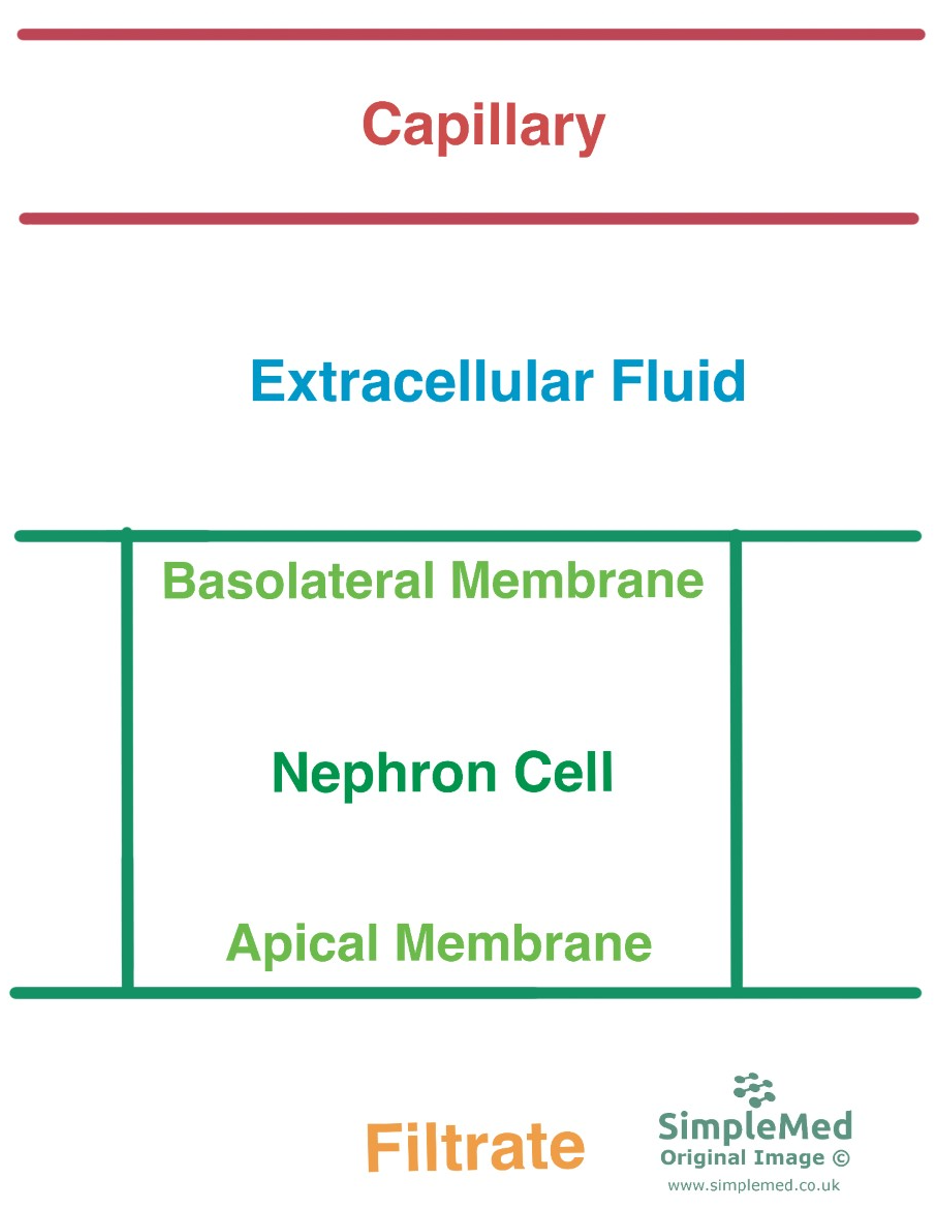 Reabsorption in the Proximal Convoluted Tubule

The PCT is split into three segments, based on the transporters that are present in the membrane: S1, S2, and S3. 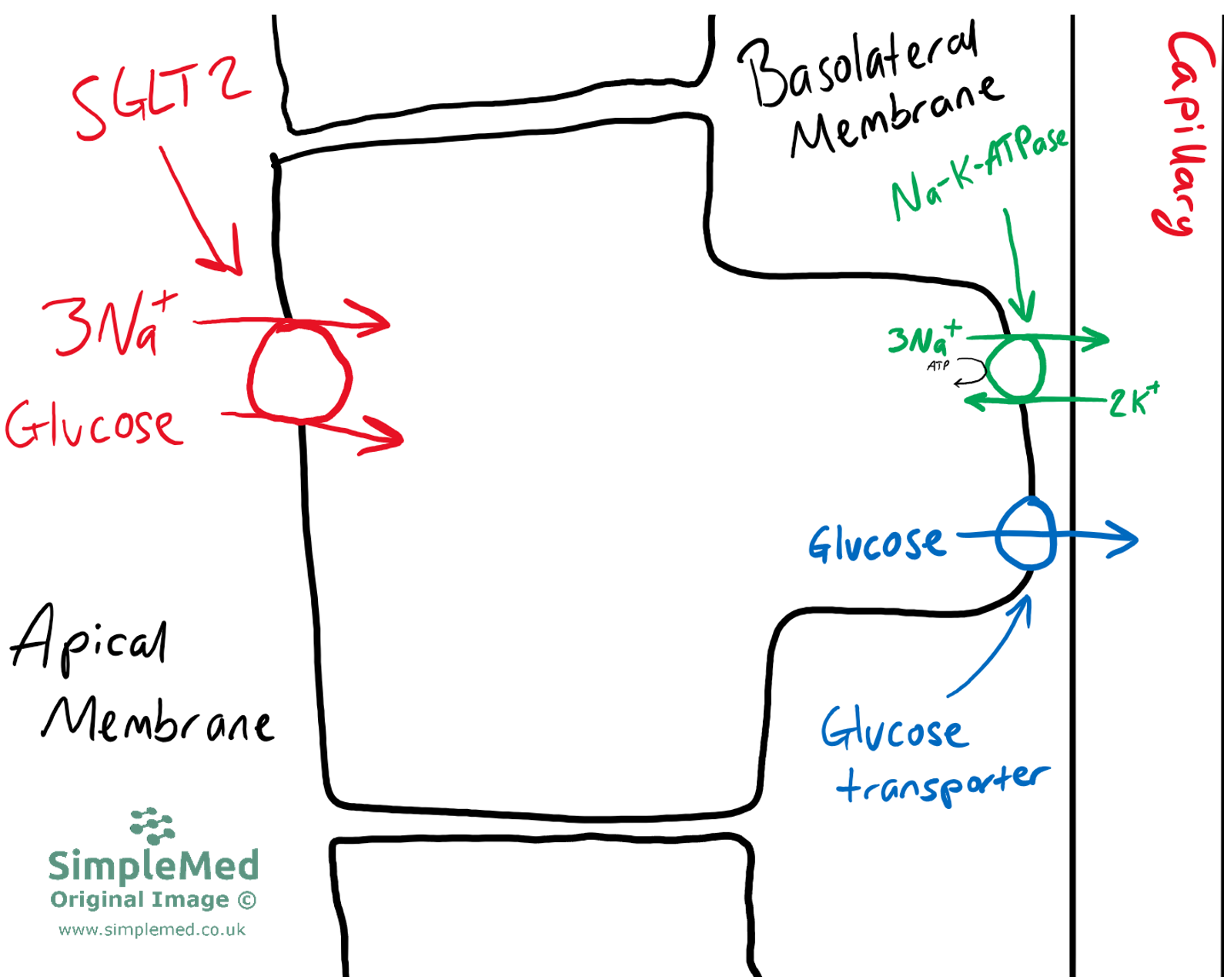 Diagram - An overview of sodium transporters in S1 of the PCT. Note there are other transporters, and not all sodium and glucose move directly from the cells to the capillary (some move into the paracellular space first)

The concentration of urea and Cl- in the filtrate in S1 increases to compensate for the loss of glucose. This creates a concentration gradient for the reabsorption of Cl- in S2 and S3.

In S2 and S3, there is again Na-K-ATPase on the basolateral membrane, however, the apical membrane differs significantly.

Na+ is reabsorbed through the Na-H exchanger and Cl- is reabsorbed in exchange for formate ions (HCOO-). The H+ and HCOO- ions are provided by methanoic acid (HCOOH), which readily diffuses across the apical membrane and breaks up into its constituent ions inside the cell, which can then be exchanged with Na+ and Cl-.

Cl- moves into the capillaries through co-transport with K+ which was brought into the cell via Na-K-ATPase on the basolateral membrane.

Aquaporin channels (AQP) are also present here, which allow water to move from the apical membrane through the cells and out of the basolateral membrane. Water is also able to move into the paracellular space (the space in between cells), and the water moved by these two methods can then move into the capillary. 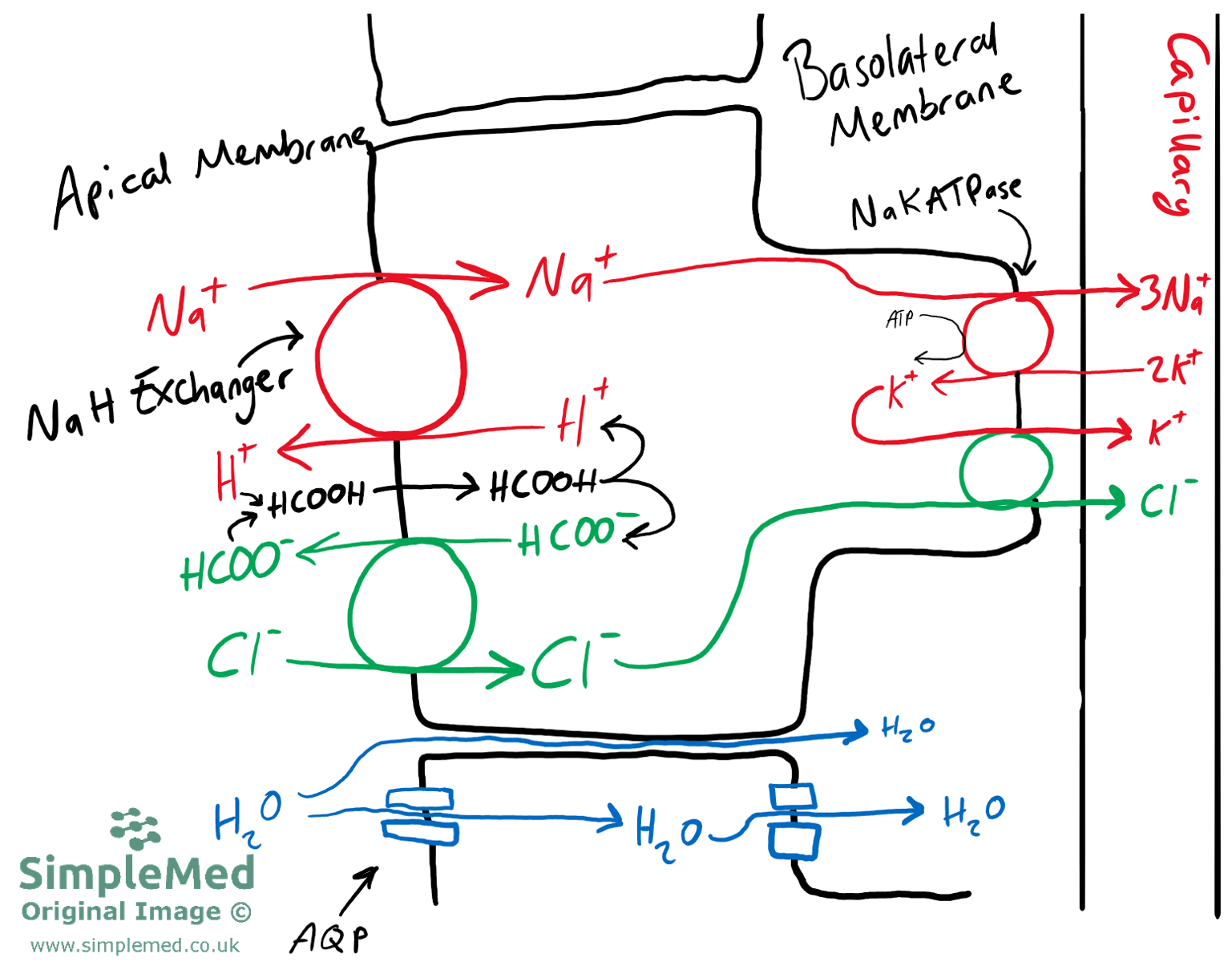 The PCT is responsible for 65% of water reabsorption. This is driven by a number of factors. Firstly, an osmotic gradient is generated by solute reabsorption so there is an increased osmolarity in the interstitial spaces. Due to this, there is also an increased hydrostatic pressure in the interstitium, meaning it draws water out of the PCT and into the interstitium. Finally, oncotic forces in the capillary act to bring water into the capillary, as this capillary will still contain proteins and blood cells.

Reabsorption in the Loop of Henle

Initially, in the thin portion of the ascending LoH, the high concentration of Na+ allows for passive reabsorption of ions through the paracellular route.

In the thick ascending LoH this concentration gradient of Na+ has diminished as some has moved out already via passive transport, so Na+ is actively transported out of the lumen by NaKCC transporters. The Na+ ions can then move into the interstitium and capillaries by Na-K-ATPase.

Cl- moves into the interstitium in its own transporter. At this point, in the filtrate, there is a lack of K+ ions as they were transported with Na+ and Cl- in NaKCC. For this reason, it is vital that K+ ions diffuse back into the lumen of the LoH and this is done through the Renal Outer Medullary Potassium Channel (ROMK). This region of the nephron uses more energy (ATP) than any other, so it is particularly sensitive to hypoxia. 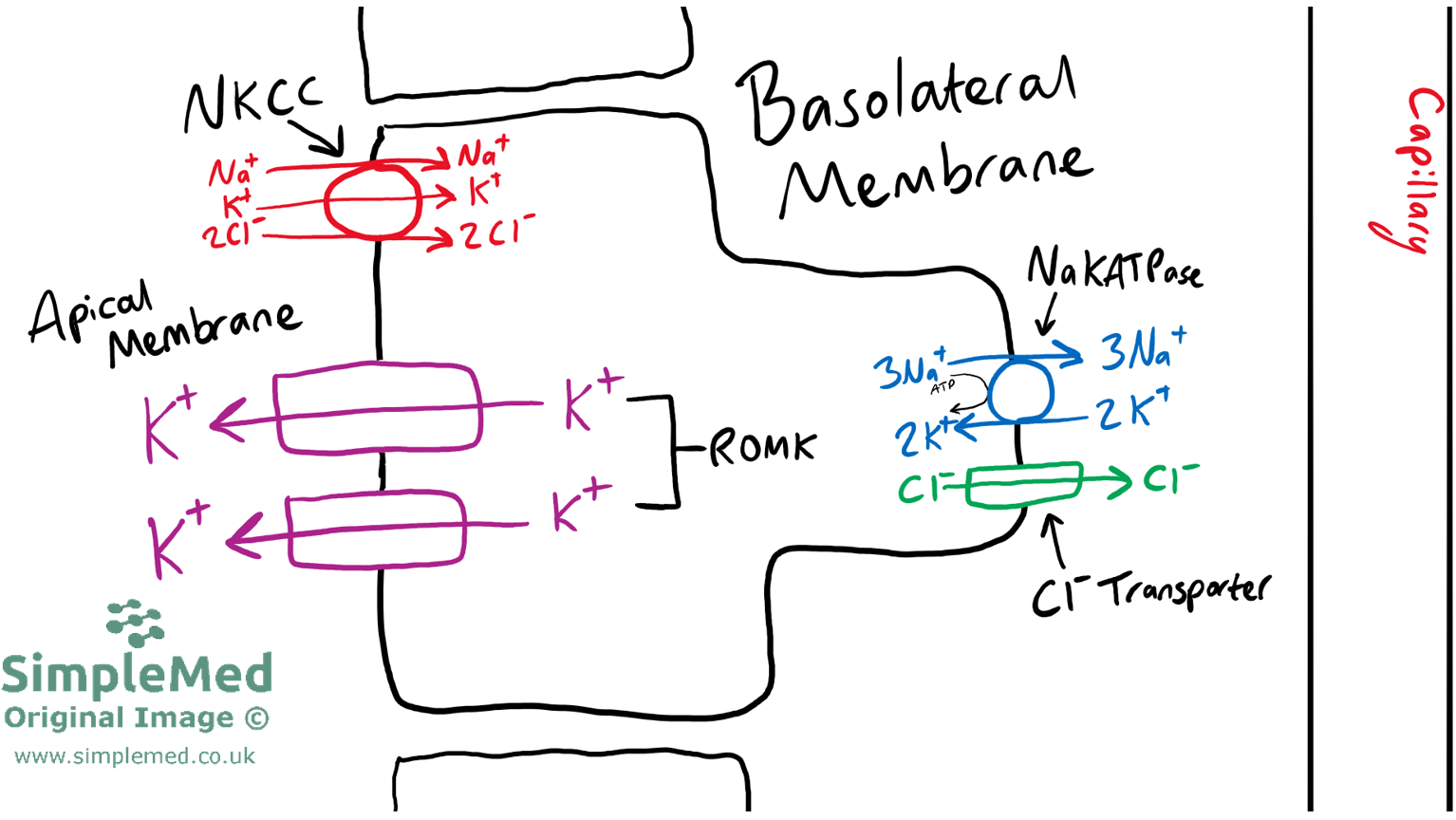 Diagram - An overview of the various transporters present in the thick ascending LoH. Remember solutes that end up in the interstitium will diffuse into the capillary

Reabsorption in the Distal Convoluted Tubule

Due to the action of the thick ascending LoH, filtrate entering the DCT is hyper-osmotic (concentrated) compared to plasma. The DCT is split into two regions: DCT 1 (the early part of the DCT) and DCT 2 (the late part of the DCT).

In DCT 1, NaCl enters across the apical membrane via a sodium-chloride co-transporter (NCC). This transporter is described as electroneutral as the 1+ charge from Na+ is cancelled-out by the 1- charge from the Cl-. Na+ is then transported into the capillary through Na-K-ATPase on the basolateral membrane, and the Cl- diffuses across a channel due to the high concentration in the cell. The NCC co-transporter is of clinical importance as it is the site of action of thiazide diuretics.

Calcium (Ca2+) ions are also reabsorbed in the DCT. Ca2+ is transported across the apical membrane, after which it is immediately bound by calbindin, a protein that needs vitamin D. This shuttles Ca2+ to the basolateral membrane where it is transported out into the interstitium through the sodium-calcium exchanger (NCX). This process is tightly regulated by hormones such as parathyroid hormone (PTH) and 1,25-dihydroxy-vitamin D (also known as activated Vitamin D and Calcitriol).

In the DCT, 2 Na+ enter across the apical membrane via ENaC and a small amount through NCC. Na+ is transported across the basolateral membrane by Na-K-ATPase. ENaC is another transporter of clinical importance as it is the site of action of amiloride (potassium-sparing) diuretics. The movement of Na+ through ENaC is not electroneutral as there is no Cl- that is being co-transported, so Cl- diffuses through the tight junctions between the cells (paracellular uptake) to maintain the electroneutrality. 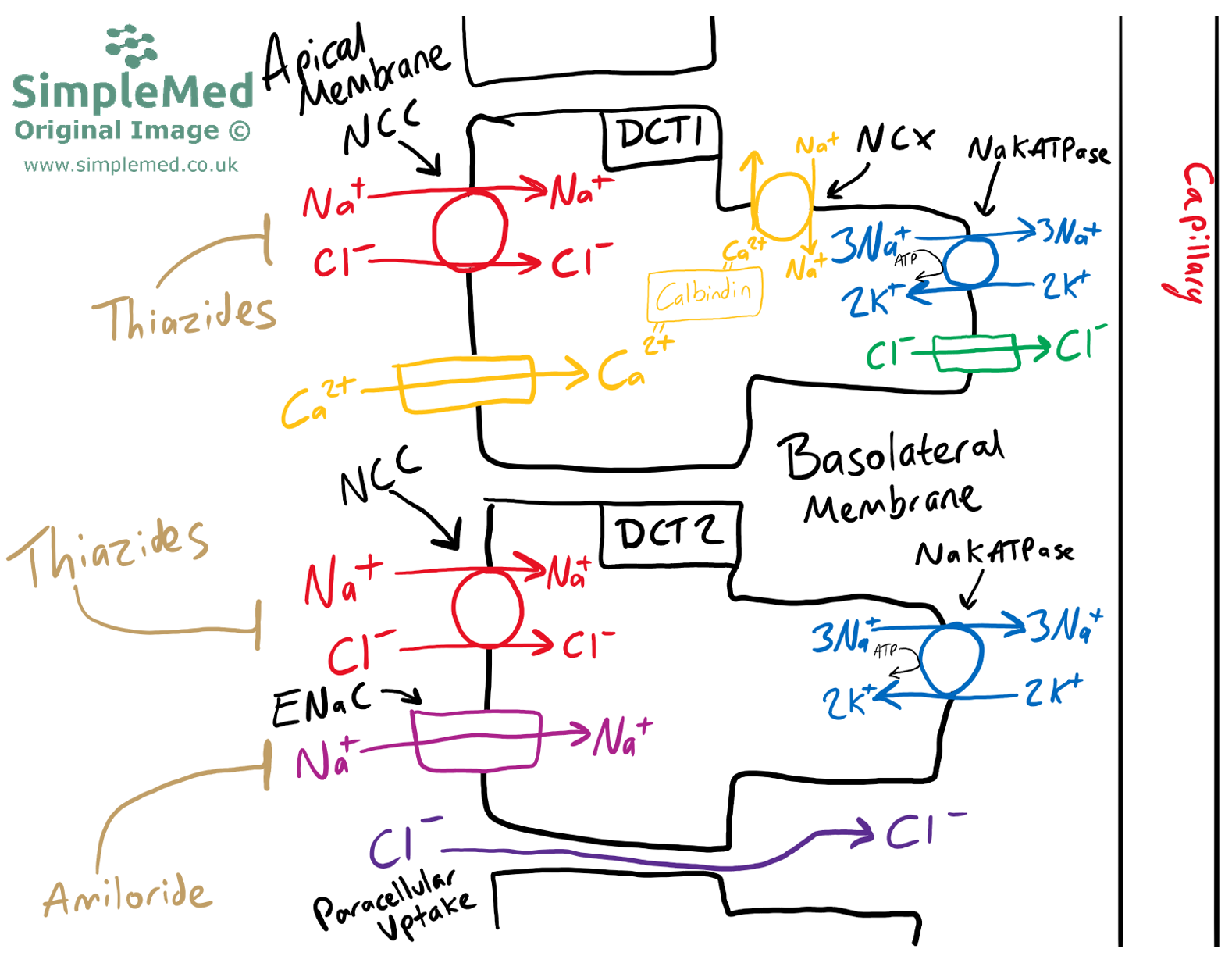 Diagram - An overview of the various transporters in the DCT with a DCT 1 typical cell above, and a DCT 2 typical cell below. Annotated in gold are the diuretics which have a site of action in the DCT. Remember that solutes which end up in the interstitium will eventually diffuse into the capillary

Reabsorption in the Collecting Ducts

There are two types of cells found in the cortical CD:

Sodium moves out of principal cells through Na-K-ATPase.

K+ which moves into the cell through the basolateral membrane is transported into the lumen through ROMK.

Principal cells can take up variable amounts of water depending on the number of aquaporin channels present in the apical membrane – this is under the influence of anti-diuretic hormone (ADH).

In both type A and B intercalated cells, Cl- moves across the basolateral membrane, into the capillary through various transporters.