What is Sepsis? - Identification and Management

Sepsis is life-threatening organ dysfunction caused by a dysregulated host response to infection. It can lead to septic shock (see our article on shock for more detail) -  persisting hypotension (consistently low blood pressure) despite fluid resuscitation which can be rapidly fatal.

In sepsis, damage to the host is mainly caused by the uncontrolled release of cytokines in the immune response which results in circulatory insult:

This can be furthered worsened by complications such as DIC where multiple clots form within the vessels using up clotting factors. Cytokines trigger thrombin production, thereby promoting coagulation and also inhibiting fibrinolysis -> the coagulation cascade leads to microvascular thrombosis -> ultimately progressing to organ ischaemia, dysfunction and failure.

Sepsis is a medical emergency and can patients can easily and quickly deteriorate. However, there are a series of measures which can be used to help identify sepsis early and prevent development of septic shock. These include the EWS (early warning score- standard to all patients) and the SEPSIS RED FLAGS: 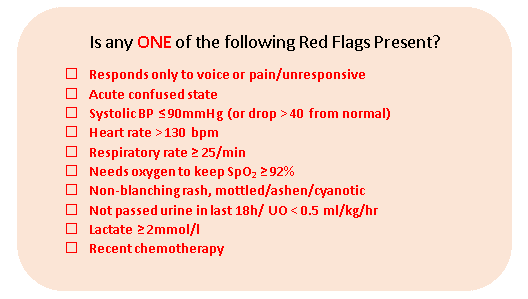 Diagram: The Red Flags for Sepsis. If any of these are present, begin the Sepsis 6 care bundle immediately

If the patient has an EWS of >3/is visibly unwell, an infection is present or suspected and one of the red flags are true Red Flag sepsis should be suspected and treatment commenced. The management of sepsis known as the Sepsis Six Care Bundle: 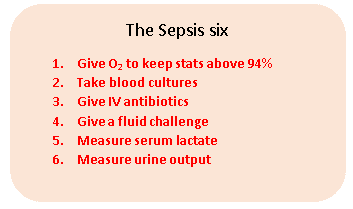 Diagram: The 6 steps that must be taken when a patient is suspected of having Sepsis

The Sepsis six should be carried out in the above order to ensure the most important interventions/ tests are prioritised. The sepsis six can also be remembered as the 3 gives and 3 takes.

Details of each step and the pathway for diagnosis are outlined on the Sepsis 6 form used when administering treatment. Some further investigations that may be useful include; full blood count, urea and electrolytes, blood sugar, Liver Function Tests (LFTs), C-Reactive Protein (CRP, a marker for inflammation), Arterial Blood Gas (ABGs), coagulation studies and further microbiology samples (CSF, urine, organism specific blood PCR, etc.). These will allow more precise identification of the causative organism and provide more information for specific antibiotic treatment. However, these investigations take time and empirical IV antibiotics should be given prior to full identification of the organism as part of the Sepsis 6 bundle.

The most likely causative organism varies by the age of the patient and guides antibiotic treatment.

The example of Neisseria meningitidis

A common cause of sepsis is Neisseria meningitidis. It is a gram-negative bacterium, often found as a diplococcus and part of the normal flora in the nasopharynx of about 10% of the population. However, if it enters the blood stream and reaches the brain it may cause meningococcal meningitis, with the potential to escalate into meningococcal sepsis. There are different serogroups of N. meningitidis classified based on their polysaccharide capsular antigen (one of its main virulence factors that confers it varying pathogenicity). Current vaccination covers the serogroups ACWY although a serogroup B vaccine is available for susceptible individuals.

Prevention consists of vaccination and antibiotic prophylaxis to recent contacts of the patient.

The classic symptoms of meningococcal meningitis are a non-blanching purpuric rash (tested using the glass or tumbler test), a stiff neck, confusion, dislike of bright lights (photophobia), drowsiness, aching muscles and joints. In neonates, the fontanelle might feel soft and bulging. In this case, the empiric choice of antibiotic is ceftriaxone (a cephalosporin) as it has the ability to penetrate into the CSF which is the site of infection of N. meningitidis. 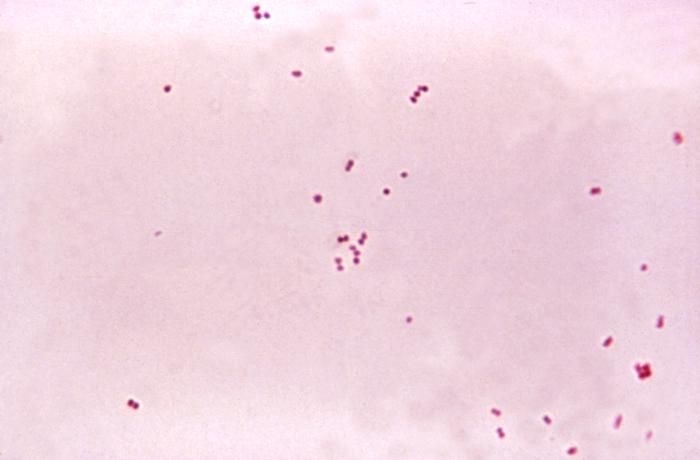 Figure: Gram negative (pink) diplococci (pairs of circular bacteria) - these are most likely N. meningitidis, the main cause of meningococcal meningitis

For other cases of sepsis with no signs of meningitis, the empiric antibiotic of choice is meropenem (a carbapenem) and finally, when a severe gram-negative sepsis is suspected, gentamicin (an aminoglycoside) is the antibiotic agent of choice. When in doubt, the trust you are working under (if you are working within the NHS) will have guidelines of first and second line treatments for a wide range of conditions, including sepsis.

Editor’s note: I highly recommend sepsistrust.org for up to date resources and information to complement this article.