By Maddie Swannack and Ben Appleby

Next Lesson - Beliefs of the Public

The World Health Organisation (WHO) defines health as 'a complete state of physical, mental and social well-being and not merely the absence of disease or infirmity'. (source)

This means that to be ‘healthy’, one should be well physically, mentally and socially.

There are three ways to interpret this definition of health. They are important to understand how a patient (especially those with chronic illness) view themselves and their health.

Chronic illness is defined as a long-term condition that has a significant impact on sufferers and has many co-morbidities. Manifestation may vary day to day, and the disease may or may not be able to be controlled and may or not be able to be cured. It is also important to note that living with chronic conditions can have a profound effect on the life of the patient, regarding social interaction, mental health, and general day to day life.

There are numerous studies that have shown a link between deprivation (or poverty) and ill health. There are many theories as to why this is. The Black Report identified a number of explanations for health inequalities.

It has been theorised that the largest cause for increases in life expectancy in the UK in the last 100 years, is likely due to social improvements such as improved housing conditions, sanitation and diet rather than medical advances.

There are two prevailing models of health: The Biomedical Model and The Biopsychosocial Model. Their differences are highlighted in the table below.

Table - The differences between the Biomedical Model and the Biopsychosocial Model

This is a very complex area with a large degree of debate over the causes and contributing factors.
An important theory to be familiar with is the Inverse Care Law. This is the situation in which individuals who are more in need of care have less opportunity to access care and those with the least need of care use health services more.

Individuals with chronic conditions can also be the victims of stigma. Stigma can be classed into 4 categories:

This was first explored in the work of Ivan Pavlov, where one stimulus becomes paired with another. Pavlov famously explored this phenomenon with dogs. When the dogs were presented with food they began to salivate and a bell was rung. By repeating this process many times, the dog began to associate the sound of the bell with food. This meant that hearing the sound of the bell began to salivate even in the absence of food. This can be seen in addictive behaviours. For example if an ex-smoker used to smoke after lunch whilst at work they may crave a cigarette after lunch as they have come to associate lunch with cigarettes. This can be a very tricky hurdle in combatting any addiction and be a trigger for relapse.

A behaviour is consciously learnt by its consequences. For example; if a young child puts their hand on a hot stove and burns themselves they learn that putting their hand on the stove is a bad idea and will not do it again. This cycle of action, consequence and change in future behaviour is also applicable in addiction. Many unhealthy behaviours are immediately rewarding. For example if a patient uses illicit drugs the positive high they get from the use of the drug will encourage further use. Further use is also strengthened by the negative effects of withdrawal which will discourage stopping use of the drug. This can lead to addiction and dependency.

People learn through observed behaviours and seek to copy these behaviours to gain the same praise. (Or to put it simply, monkey see, monkey do.) For example if an individual sees others drinking alcohol and as a result are having fun, they may then copy this behaviour in an attempt to also have fun/ achieve the positive result.

This can be compounded by peer pressure: if it is accepted by a group that drinking alcohol is necessary to have fun, for an outsider with the desire of acceptance into that group, will drink alcohol to fit in and to gain praise.

However, it is worth considering that these theories are deterministic – this means that according to the three theories, no one should ever be able to escape bad behaviour, and the individuals in the examples would never be able to recover. Of course, this can’t be true, it is possible to break from these negative health behaviour patterns however as a result of their structure this can be difficult and may take multiple attempts and concerted effort. But this is possible, so it must mean that these three theories are not completely and only true.

The COM-B model discusses the factors that contribute to a behaviour. Take for example a patient who is diagnosed with Type 1 Diabetes Mellitus and is now required to inject insulin before a meal.

This patient must have the capability to perform the injections. This means that they must understand the process of how to safely inject insulin and have the ability to do so.

They must also have the opportunity to do so, through having insulin available and the time to perform the injections before each meal.

These both contribute to the patient having the motivation for performing the injections. The patient must also understand why they need to perform the injections, and the consequences if they choose not to.

These all contribute to their behaviour, and whether they choose to inject or not. 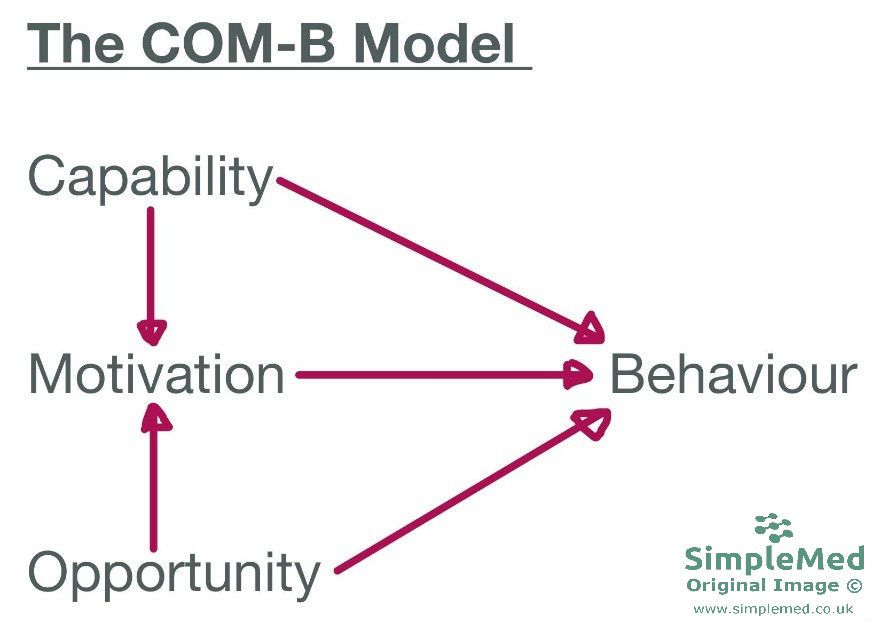 It is possible to apply different treatment models to substance abuse and misuse. For this part of the article, substance abuse is assumed to be either IV drug use or alcohol abuse so specific treatment examples can be given, but these models can be applied to any form of addiction.

There are three main treatment models when considering substance abuse:

It is important to note though that a combination of all three treatment models is often the most effective. For example, an IV drug user needs medical treatment to treat the symptoms of withdrawal, help in avoiding situations where they might be exposed to drugs, and counselling to teach alternative coping mechanisms.

There are also two themes of treatments offered alongside the key themes of the treatment model based on whether the patient is interested in changing or not.